A complete guide to jamón ibérico

Wafer-thin slices of this cured pork glisten when they’re fanned out on a plate, the meat has a sweet, nutty flavour and the marbling means it almost melts when eaten. A slice may be gone in seconds but there’s years of production behind this truly artisan food…

What is jamón ibérico?

Quite literally, jamón ibérico translates from Spanish as Iberian ham – that is ham made from black Iberian pigs. It’s one of the finest hams in the world and slivers of the cured meat (usually from the leg) have a generous marbling of fat and a deep red colour, as a result of rearing the pigs free-range and their diet.

While you can use it in dishes, it’s best enjoyed simply on its own. Or preferably with a glass of sherry… 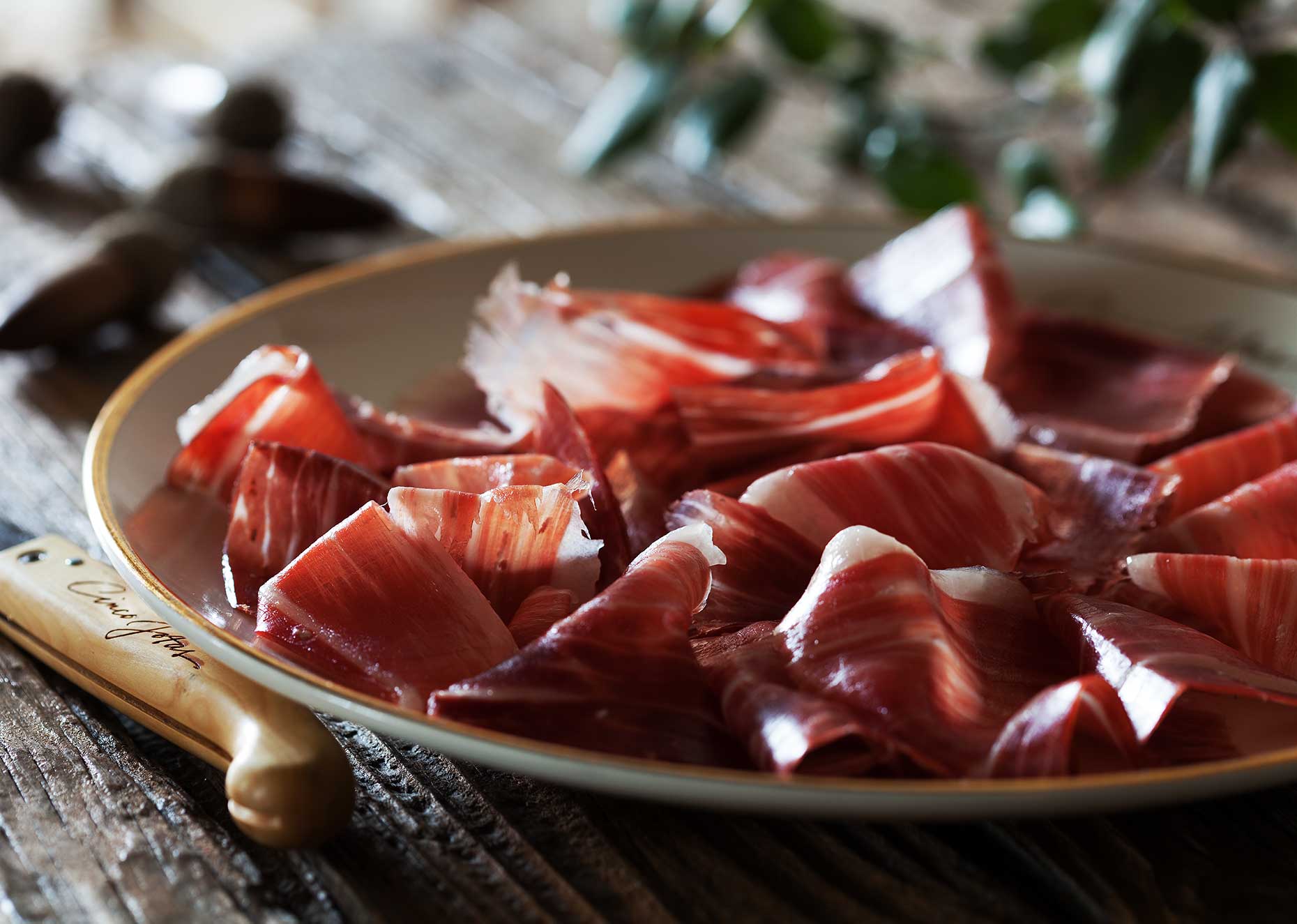 The ham and its production process is regulated by Denominación de Origen, Spain’s protected food status. It’s deep-rooted in Spanish culture and tradition on an almost anthropological level, thanks to the unique eco-system in which it’s created. People joke that even vegetarians in Spain will eat it because it’s considered something so much more than food. But not all jamón ibérico is created equally...

What is jamón ibérico de bellota?

Like a lot of foods, there are different grades of jamón ibérico. The most basic-quality white label jamón ibérico comes from mixed-breed pigs who are reared in an enclosed area, fed with animal feed and allowed a minimum of 21.5 square foot (2sqm) of space per pig.

Black label jamón ibérico de bellota is the proper stuff. It means that the ham is from 100% Iberian pigs which have been raised free-range, with a minimum of 0.75 hectares per animal and fed on an acorn diet during the montanera (the acorn season from September to March).

Acorns (the ‘bellota’) are one of the essential components to the ham’s rich flavour. Some brands like Cinco Jotas, based in Huelva, go a step further, allowing pigs a minimum of two hectares plus access to graze on more than 7kg (15.4lbs) of acorns a day, during the montanera.

Production covers four regions in southwestern Spain where there are vast expanses of dehesa – a rolling landscape of grassy meadows and oak trees – in which the pigs roam. They are Salamanca and the town of Guijuelo; Huelva and the town of Jabugo; Les Pedroches; and Extremadura.

There’s a reason why Iberian pigs are called olive trees with legs. Jamón ibérico de bellota is extremely rich in oleic acid, a healthy monosaturated omega-9 fatty acid, thanks to the acorns the pigs eat. In fact, only olive oil has a higher oleic acid content.

Chef José Pizarro, who grew up in southwestern Spain and pioneered bringing tapas to the UK with his acclaimed restaurants and cookbooks, swears by the stuff: “I eat a plate of ham every day. I’m sure it’s contributed to lowering my cholesterol!”. A plate of ham a day to help keep the doctor away? We’ll give that a go.

READ MORE: A coffee and chat with José Pizarro 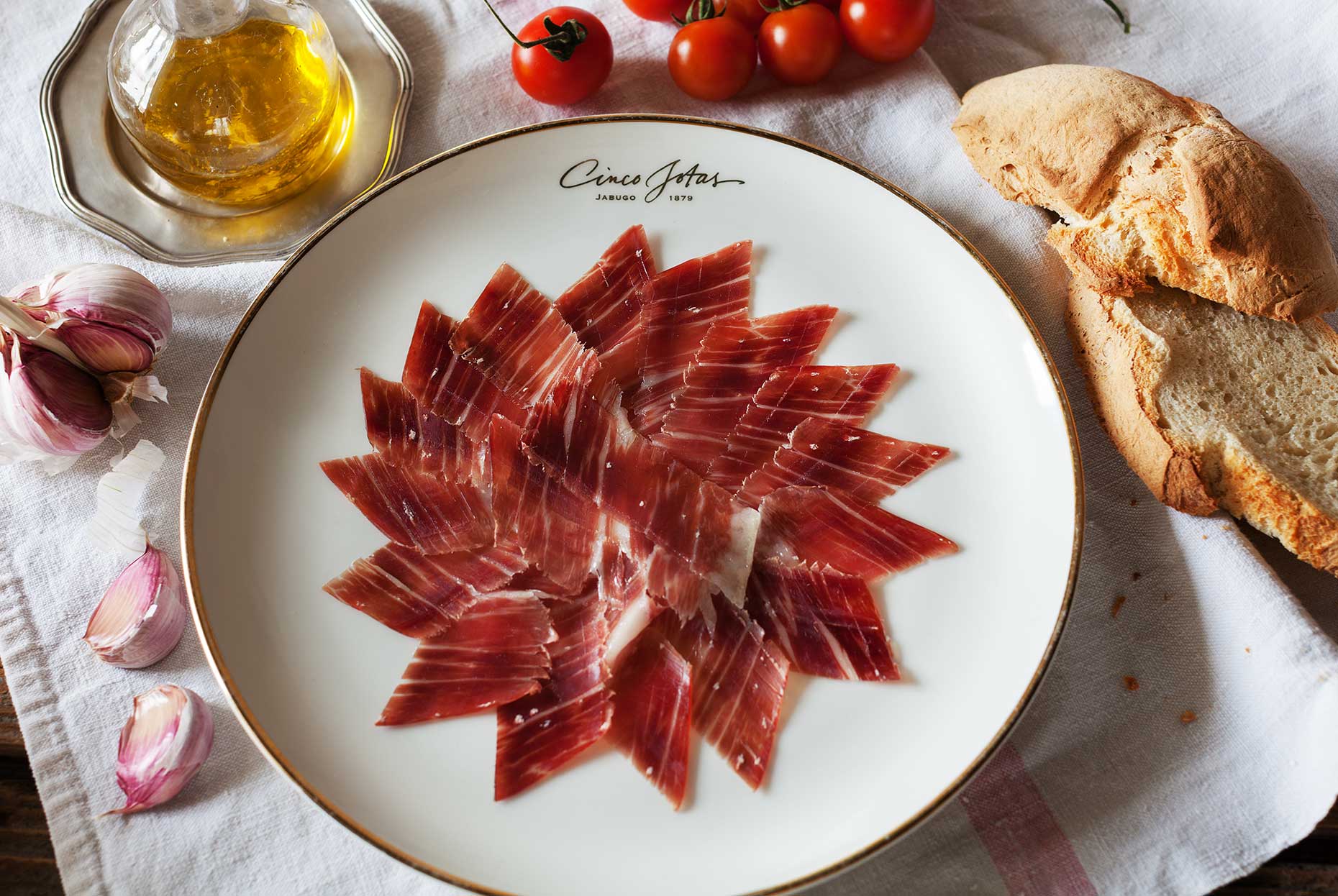 Native Iberian pigs, or pata negra as they’re also known, are instantly recognisable with their long, skinny legs, black-grey hide, long pronounced snouts, big floppy ears and black hooves. It’s down to this breed and the way its fat is distributed that creates jamón ibérico’s impressive marbling. The ham’s deep red colour is indicative of the pigs’ free range lifestyle – moving all the time around the dehesa means the meat is rich in myoglobin (a protein which receives oxygen from red blood cells) and iron. 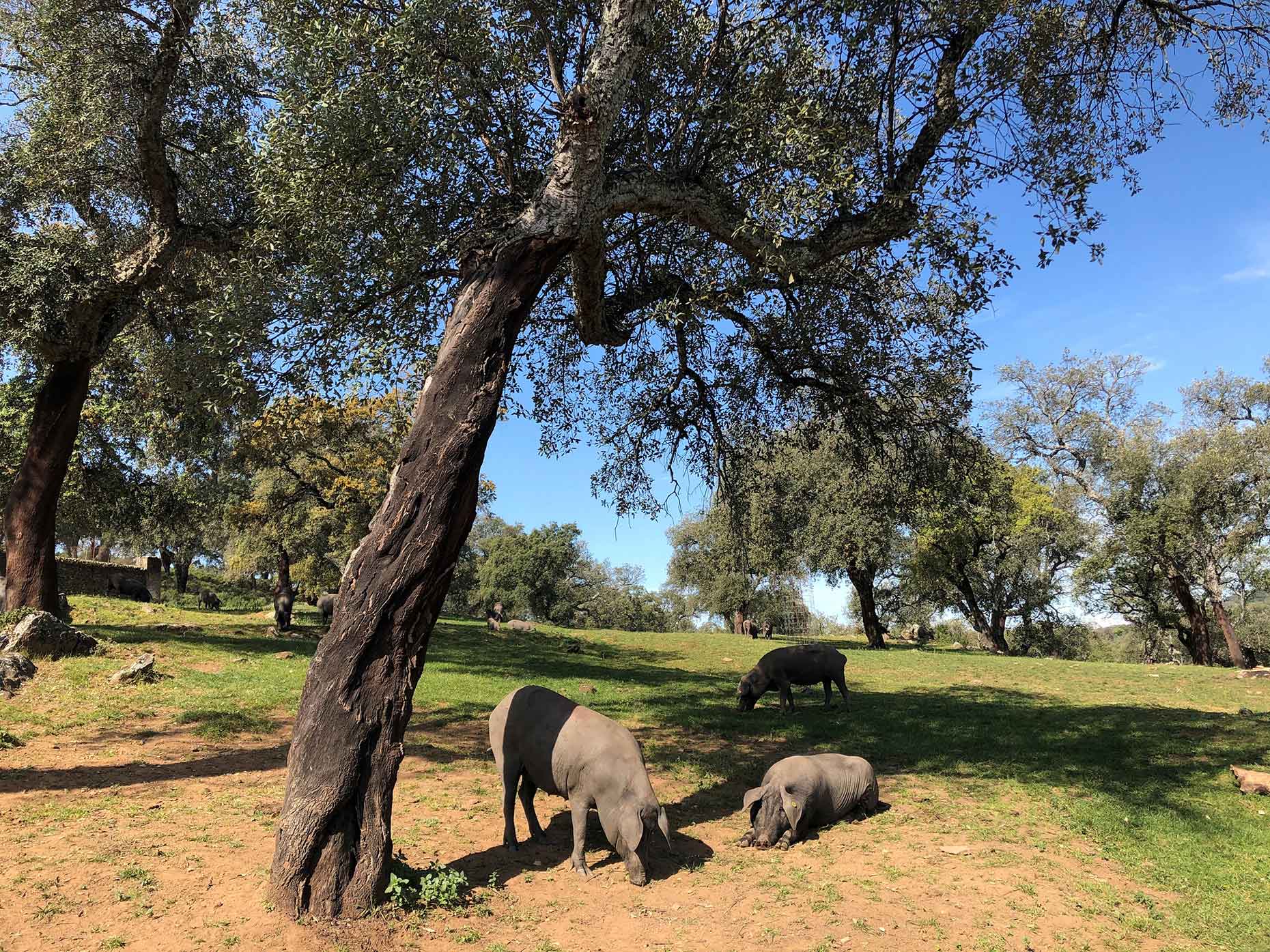 Cinco Jotas’ pigs are raised until they reach maturity at 18 to 24 months, weighing in at a minimum of 145kg (320lbs). The most important period in their lives is when they only eat grass and acorns for the last 60 days, during the montanera. Access to fresh grass is equally as important for moisture, so the pigs can eat more acorns. 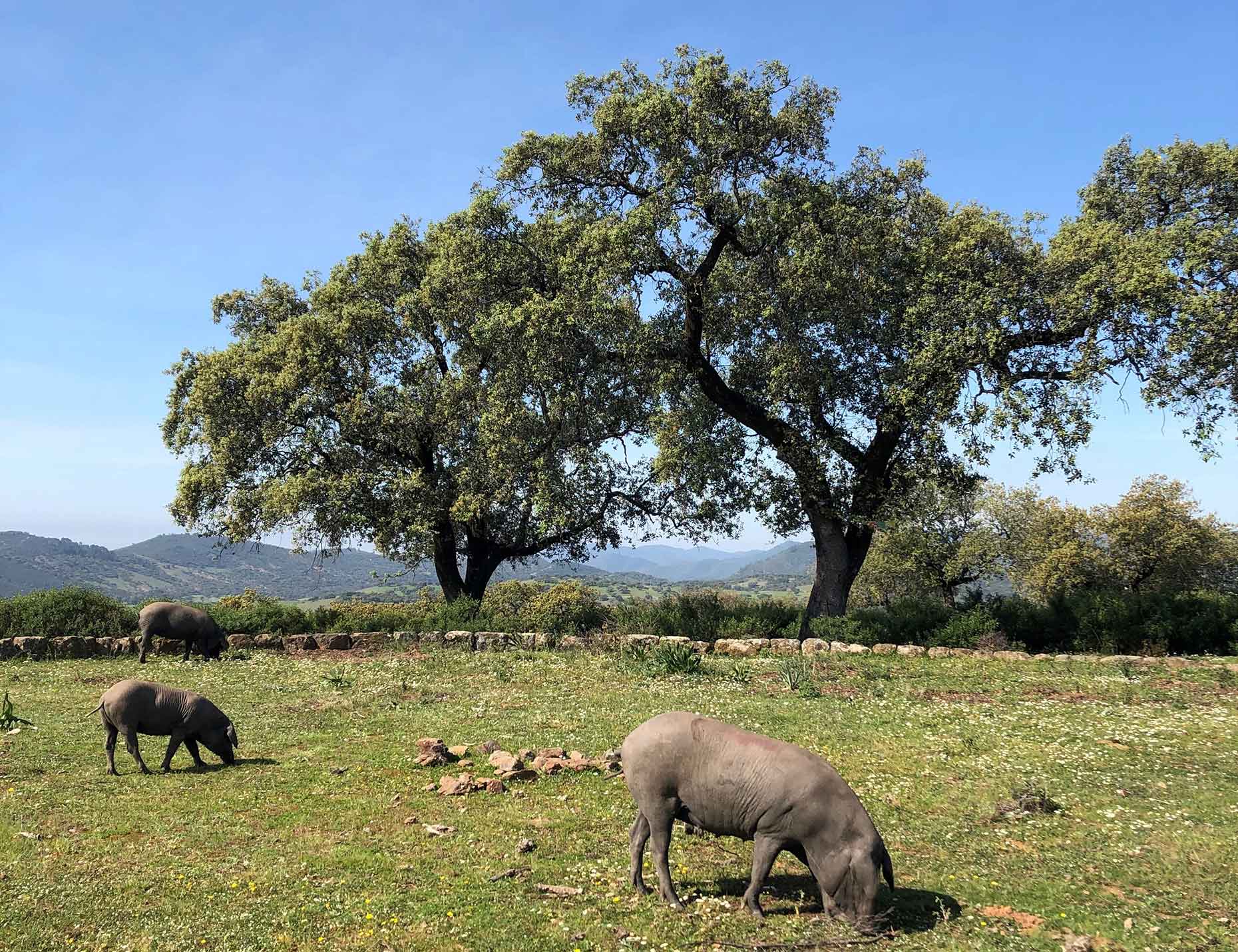 How is jamón ibérico made?

After a lengthy pig-rearing process, there’s still a long way to go until slivers of ham can be expertly carved from a leg of jamón. First, a profiler inspects the meat and, like a sculptor, decides how much fat to trim. The legs are then chilled and salted, fat side down, for around one day per kilo (2.2lbs). After washing and drying, legs are hung and left to cure, in some cases, for up to seven years.

It's a labour and time-intensive process so no wonder that the meat is one of the most expensive foods in the world... 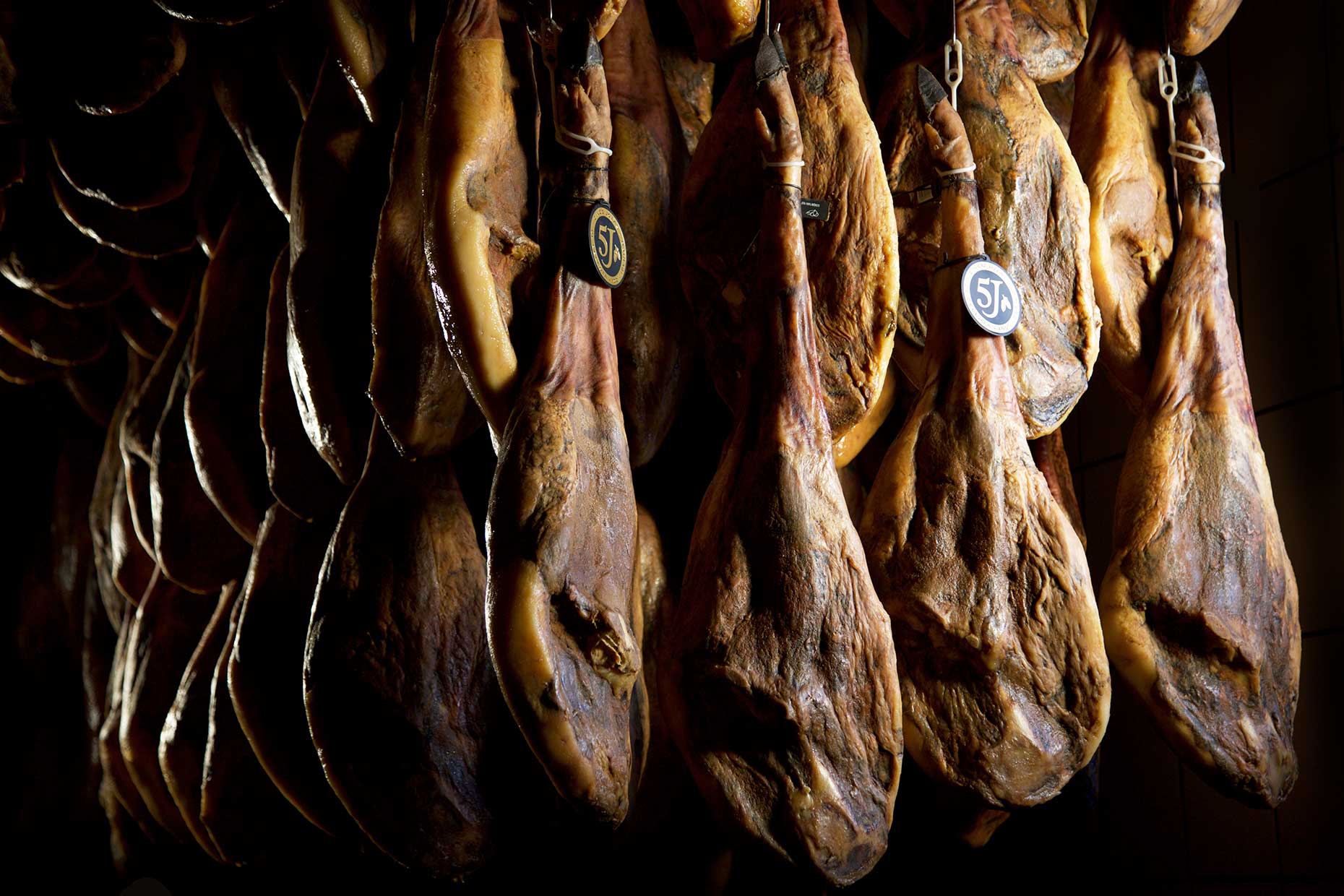 Humidity is also an important factor in the process. A curing cellar must be low in temperature but high in humidity. María Castro Bermúdez-Coronel at Cinco Jotas explains, “The climate and the pig breed is why jamón ibérico is made in Jabugo. This is one of the rainiest places in Spain.” Humidity is controlled in Cinco Jotas’ curing cellars the old-fashioned way – by spraying the floor with water and opening the windows as needed.

The flavour of the meat here will be unique to these cellars – and boy, is there a lot of it. Walking around Cinco Jotas’ cellars is like going down the rabbit hole. Legs are strung from the ceiling everywhere. In low-lit vault-like rooms, lining a meaty labyrinth of seemingly endless hallways and corridors which lead into vast warehouse-type spaces. The gamey, sweet smell is inescapable, in a good way. 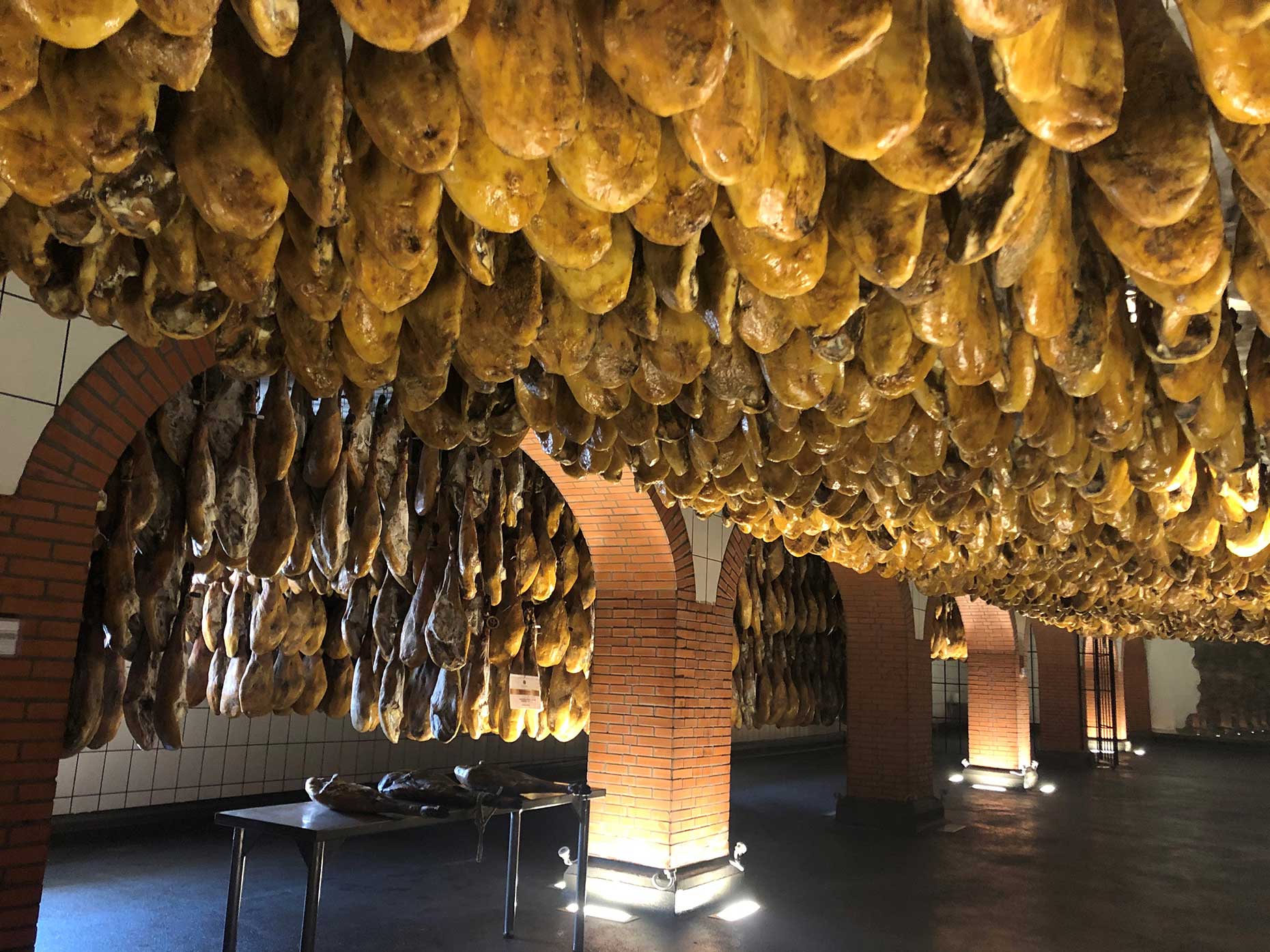 So how does a top chef choose from thousands of hams? José Pizarro sells the ham at his restaurants (currently online for takeaway and delivery) and gets 400 to 500 legs a year. He says, “I come to Cinco Jotas once a year to choose hams. They’ll already have a selection for me because they know what I like, and I’ll test the quality by smelling and touching them.”

There are different cuts of meat from a leg of jamón ibérico and each has its own characteristics. Here are a few of the main ones.

When you see a carver elegantly slicing jamón ibérico down the long side of the leg, when the hoof is pointing upwards, it’s the maza. This section is the main part of the ham and has the most meat. It’s a crowd-pleaser: a well-balanced flavour and nice amount of marbling. 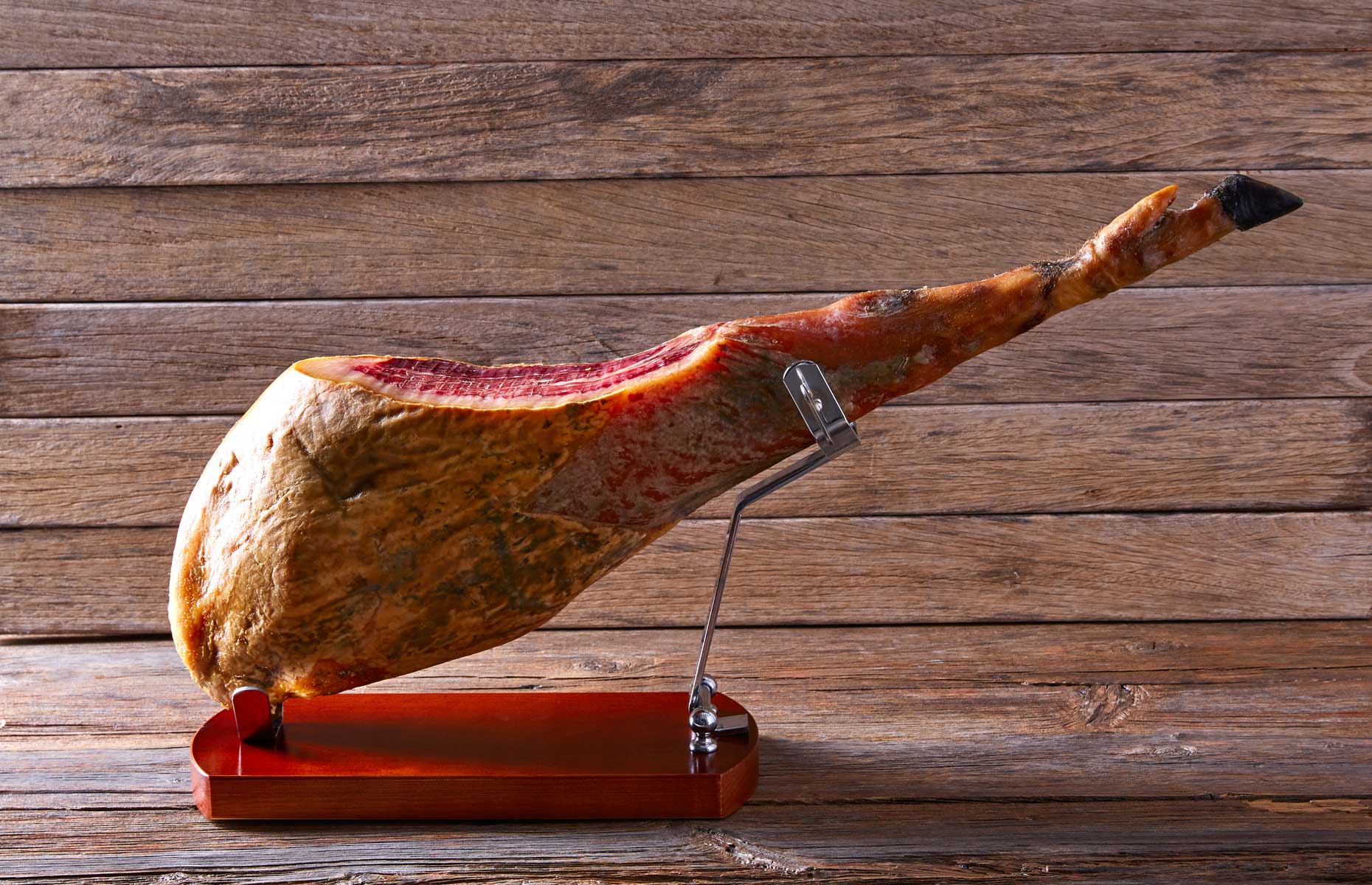 Located on the opposite side of the leg to the maza (exposed for slicing when the hoof is pointing downwards), the babilla is the rump end. It’s smoother in flavour and offers less meat as it’s closer to the bone.

READ MORE: Everything you wanted to know about oysters

This is one of the tastiest cuts of jamón ibérico. The opposite end to the hoof, slivers of the punta are extremely marbled as the fat has melted into this part of the leg when it has been hanging. Its depth of flavour has a hint of pepper. 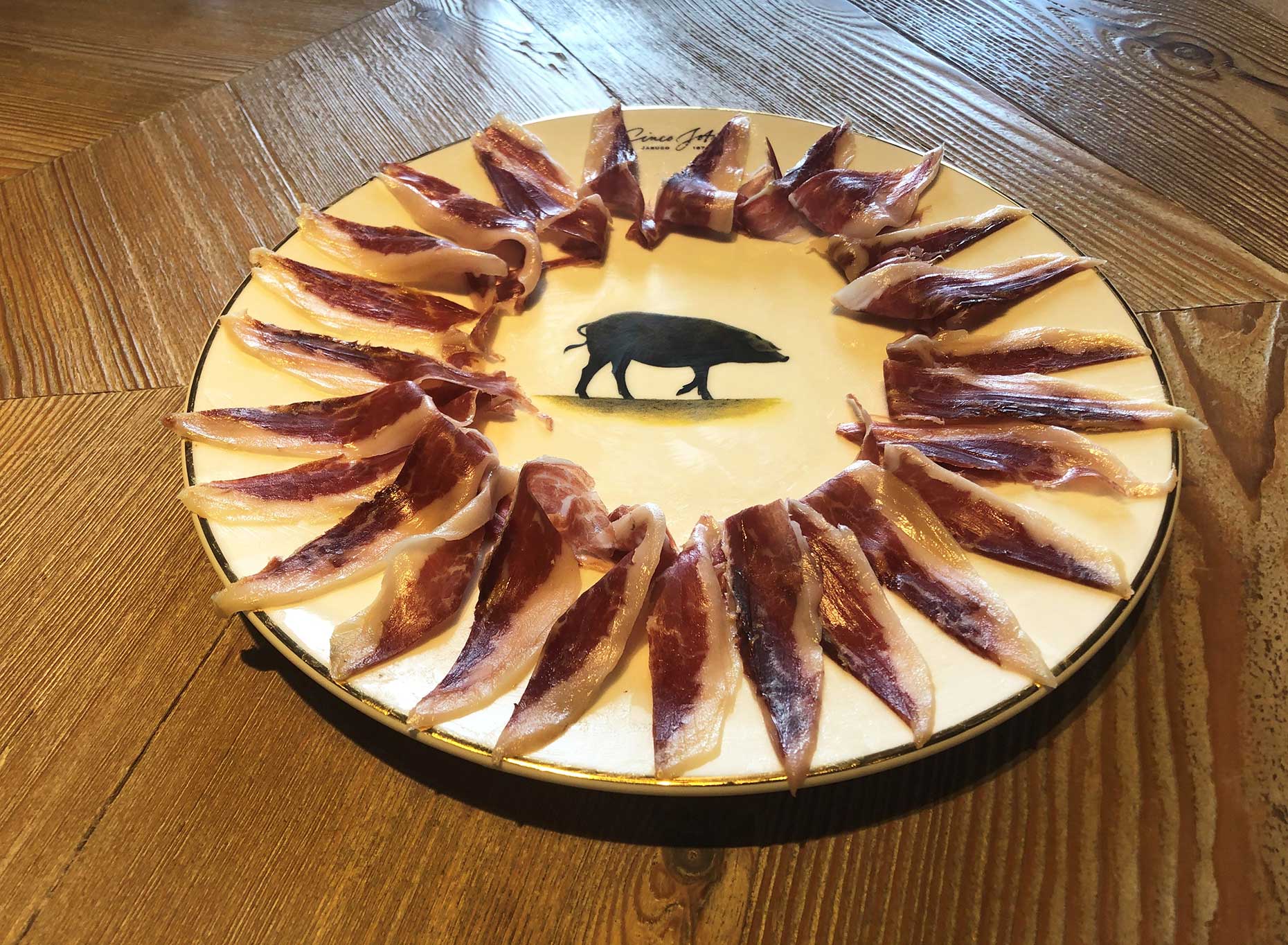 What to pair with jamón ibérico

Enjoying a plate of jamón ibérico by itself is pretty unbeatable but there are ways you can incorporate it into dishes. José Pizarro says, "It’s a very diverse product. Of course, the best way to eat it is just carved because it’s not cheap. For me it’s best to use as much as I can from the leg to put on the plate. But when you’ve finished with what you can carve, you can use it for so many things."

And one his favourites? Crispy on the outside, cheesy and oozing on the inside croquetas: "Croquetas de jamón are unbelievable, the best thing ever. We like jamón, béchamel and frying! You can't go wrong." 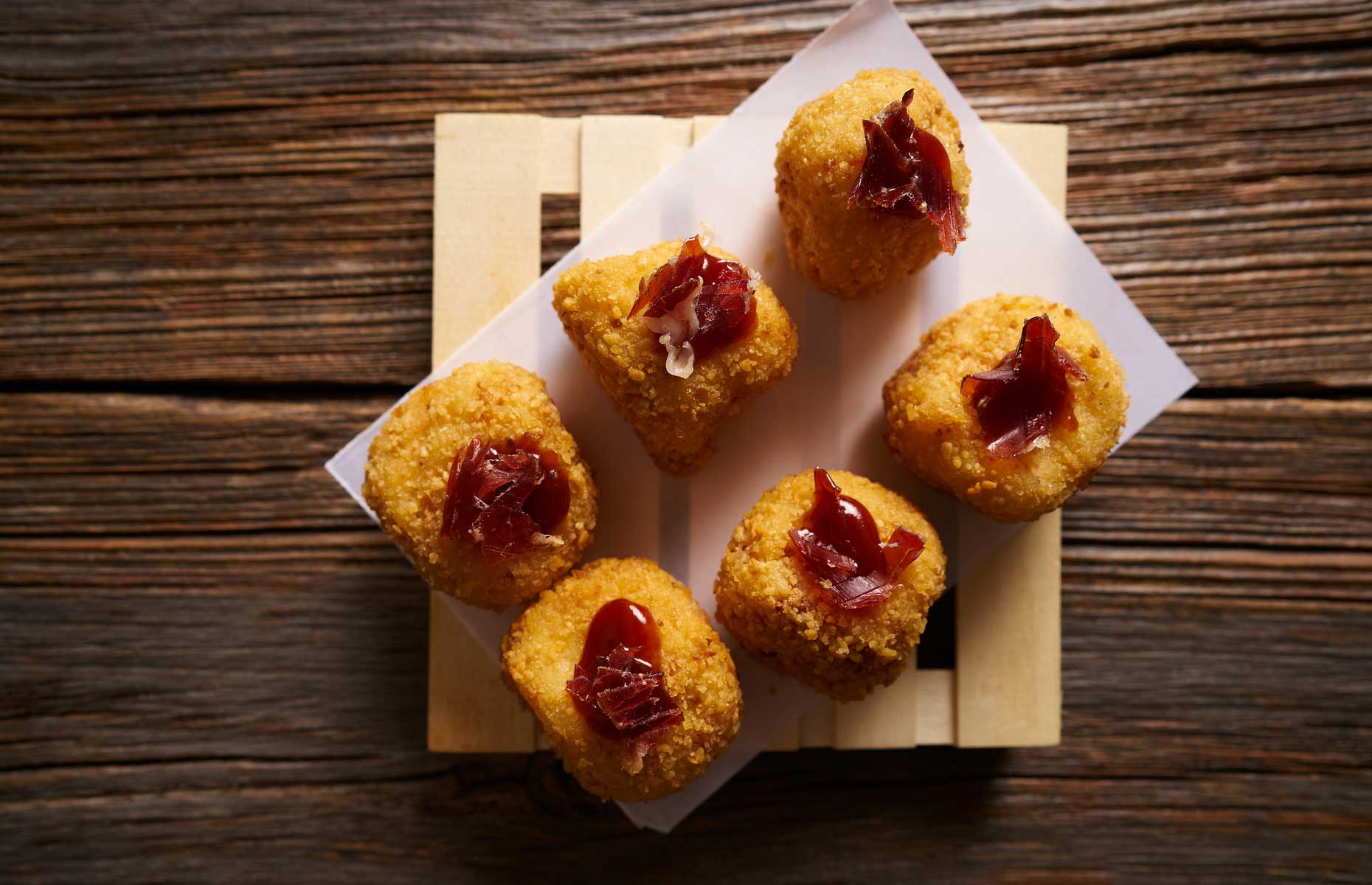 José continues, "In spring and summer, jamón bring a little saltiness to broad beans, peas and artichokes. When you sauté it, you get a lovely oil. And from the bones, you can get the best stock. In winter, lentils with chorizo and jamón is absolutely delicious."

But a simple plate with a glass of something reigns supreme. José says, "You could serve it with almonds, some nice prawns like an apéritif. For me, at the end of day, there’s nothing better than a glass of fino sherry and a plate of jamón"