A complete guide to oysters

Salty and slippery oysters, with meaty, briny morsels hiding between a clasped shell, can be a divisive seafood. But if you don’t fancy them raw and down in one, there are many more ways to enjoy this shellfish treat. We take a look at what exactly they are, how to shuck them and how to eat oysters.

What are oysters and why eat them?

In technical terms, oyster is the common name for bivalve molluscs, from the same family as types of clams and scallops, consisting of fleshy, grey-beige meat and clear, salty liquid inside a rocky, grey hinged shell.

The seafood is low in fat and grown all around the UK and Ireland. They’re also sometimes eaten by vegetarians (and a handful of vegans) because oysters don’t have a central nervous system, and some people have made the case that this means they’re a more ethical choice than meat. 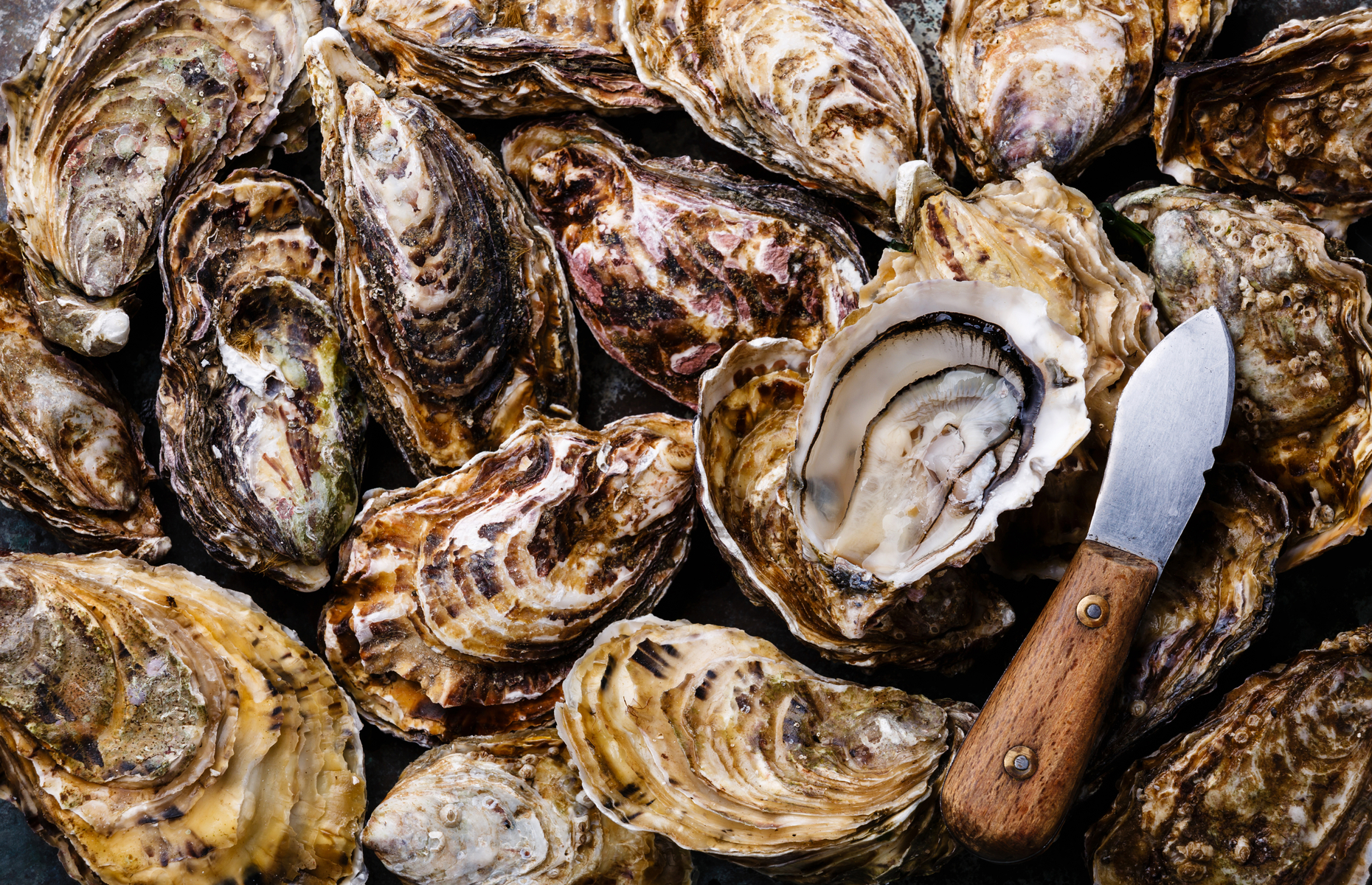 So far, they don’t sound entirely appealing. But the fuss is about the variety of flavours depending on where the oysters grow. Bobby Groves, head of oysters at London’s Chiltern Firehouse and author of Oyster Isles: A Journey Through England and Ireland’s Oysters (published by Constable; out now), explains: “If it's from Poole Harbour it's going to taste a certain way compared to a marshy estuary oyster from the River Blackwater in Essex. Like with wine and cheese and the terroir, or ‘merroir’ with water, the taste comes down to where it's from.”

What is the difference between a native oyster and a rock oyster?

Native oysters are indigenous to Europe and are smaller and shallower than rock oysters. In Britain, natives come into their own around the autumn when they come back on the market (they’re only eaten in months with an ‘r’ in their name, ruling out the summer months when they spawn). Bobby explains the most obvious difference between rock and native oysters is that native oysters taste “mineral, nutty, briny and savoury”. 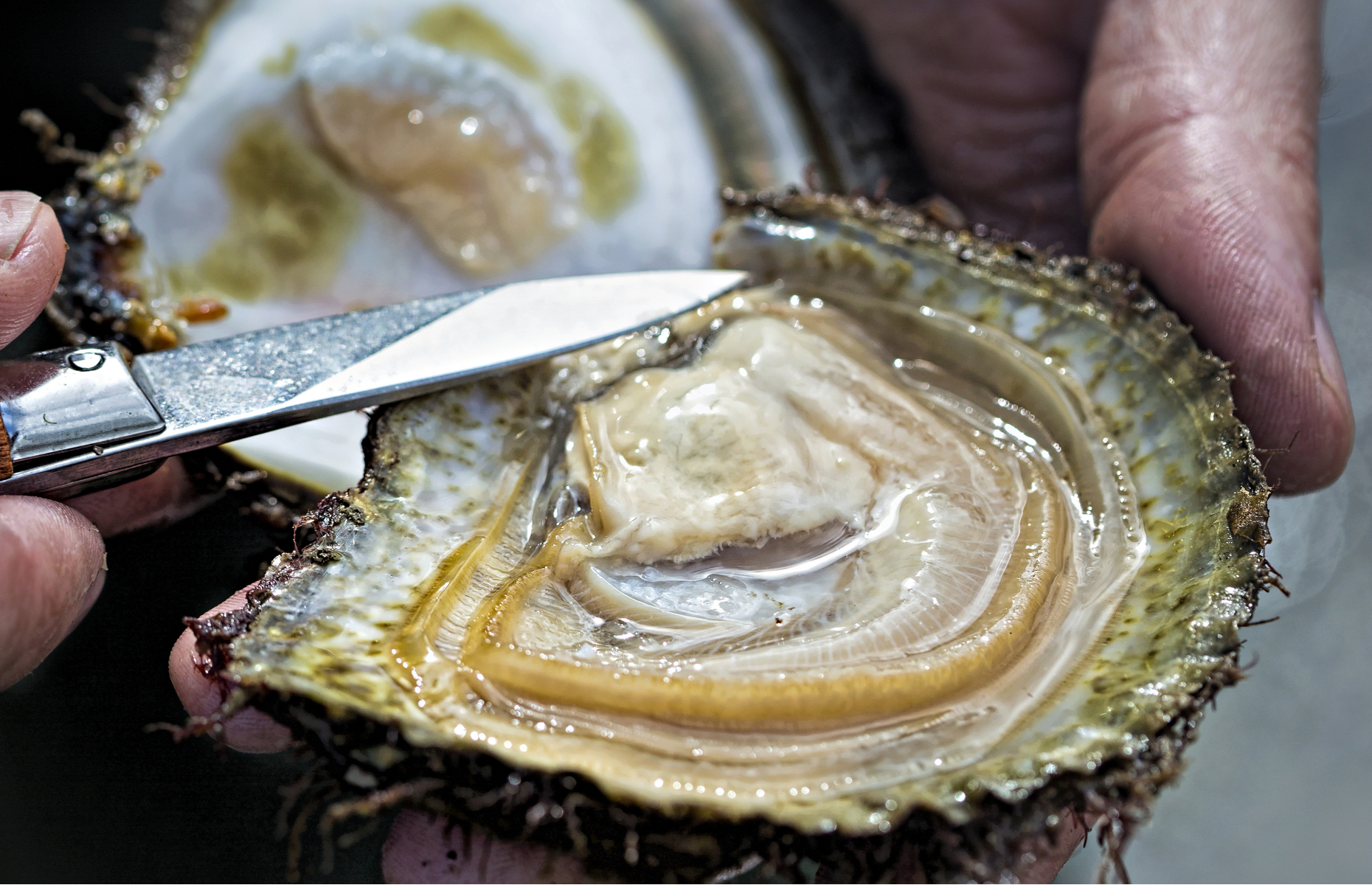 The rock oyster, also called the Pacific (where it first grew native), is a bit bigger and is available all year round. Bobby says, “The key thing about the rock or Pacific oyster is that the UK and Ireland started to produce them en masse in hatcheries in the 1960s, which means that fishermen are not at the mercy of a bad harvest so much anymore. They don't go as creamy as a native oyster.” 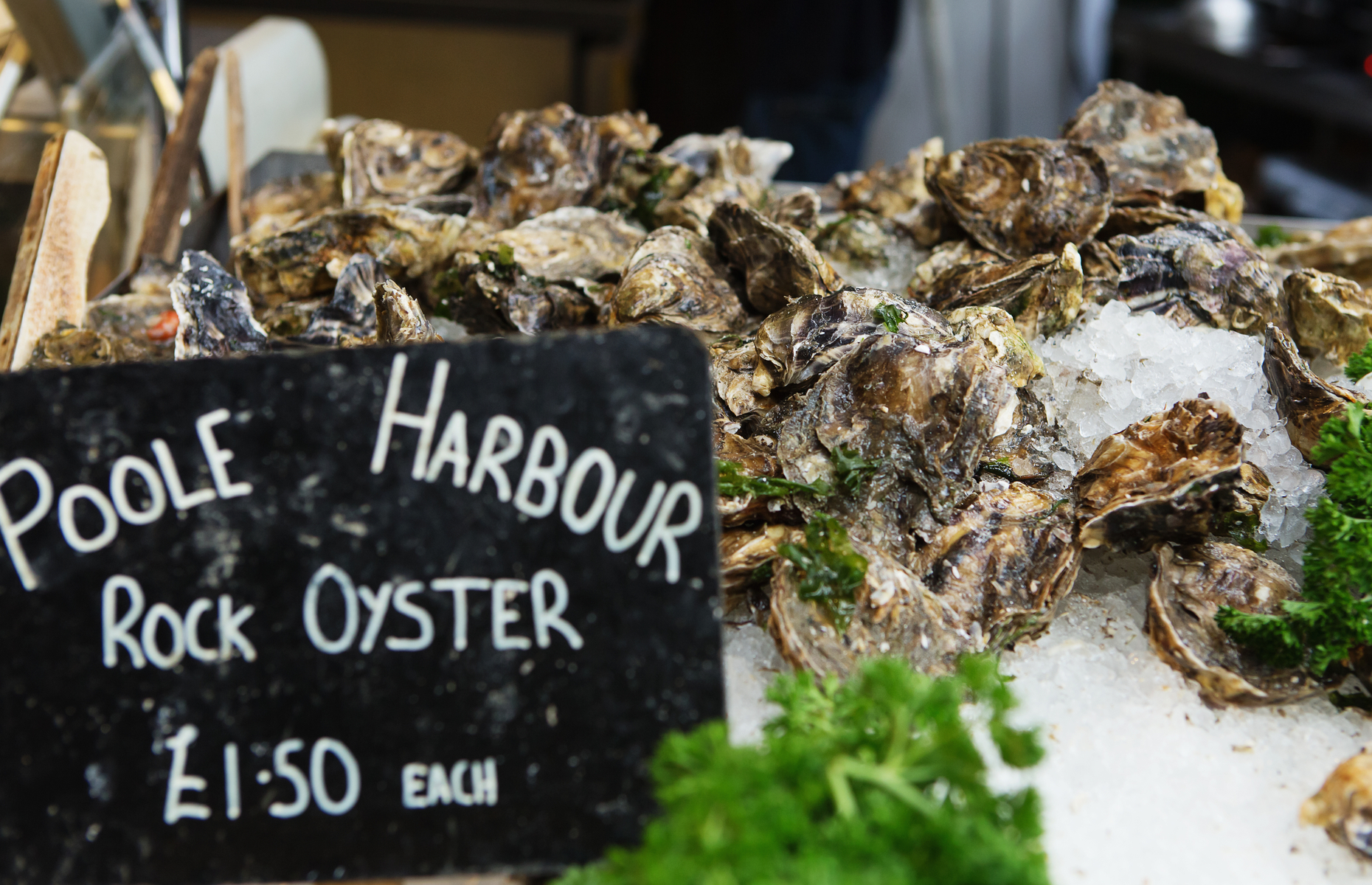 How are oysters farmed?

Oyster farming is also known as oyster culture (like agriculture) and in Britain the industry is thousands of years old.

You can often recognise an oyster farm out at sea by the rows of what look like big mesh pillows on tables, lined up between the high and low water mark. These bags contain oysters, growing safe out of reach of predators. 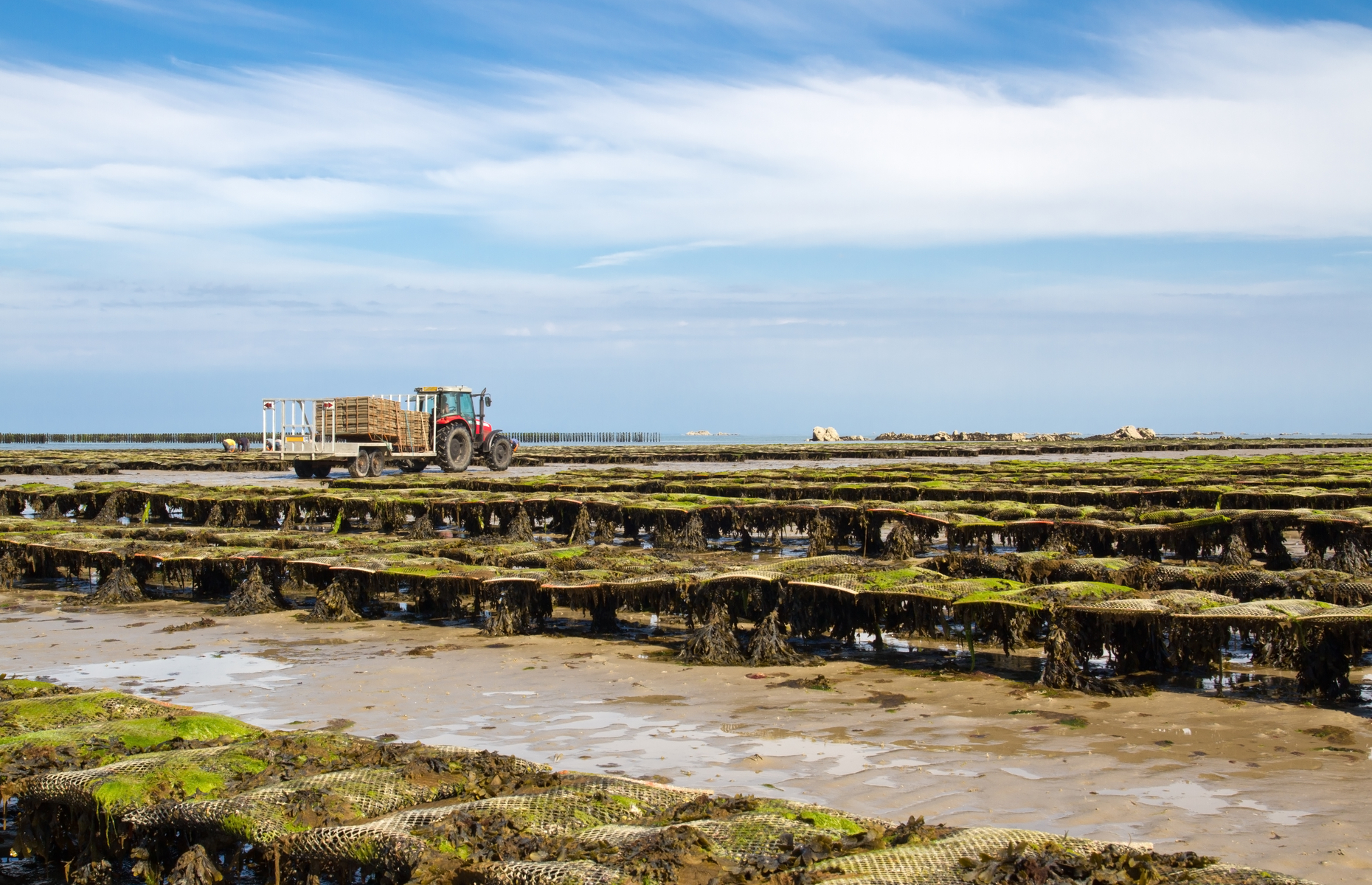 Some oyster fishers still use traditional methods. For example if you ever eat a Fal oyster (a protected designation of origin species from Truro and Falmouth), this particular product will have been dredged by sail boat only.

Still, there’s little modern-day tech involved in oyster culture now. Since the 1960s, farmers have been able to buy baby oysters from hatcheries which reduces the risk of a poor harvest.

Where can I buy oysters and what should I look for?

You can buy oysters from farms or fisheries, local fishmongers and also from some supermarket fish counters – Waitrose has notably good relationships with British and Irish suppliers.

In terms of what you should look for when buying oysters, Bobby advises: “Make sure you're buying an oyster with a nice weight on it, that it’s closed and if you knock two together they make a solid sound. If they make a coconut sound, it means one of them is dead.”

Oysters used to be considered a peasant food in the 19th century and while the tables have somewhat turned, with many high-end restaurants charging eye-watering prices for the molluscs, they can be pretty good value when bought from a fishmonger or supermarket.

How should you store oysters safely at home?

Keep oysters in the fridge and store them upright: that is, cup-side down. Oysters have a flat-topped shell on top and a scooped underside – you want them to be sitting on the shell.

“When the oyster opens, that's when it's not good to eat anymore,” Bobby notes. “Rock oysters last longer than natives. You really want to have natives in the first couple of days, and rock oysters last around five days.”

How do you shuck (open) an oyster?

Although you could open an oyster with anything, it’s best to use a shucking knife – a short knife with a thick, pointy blade – which you can buy online or from some fishmongers. 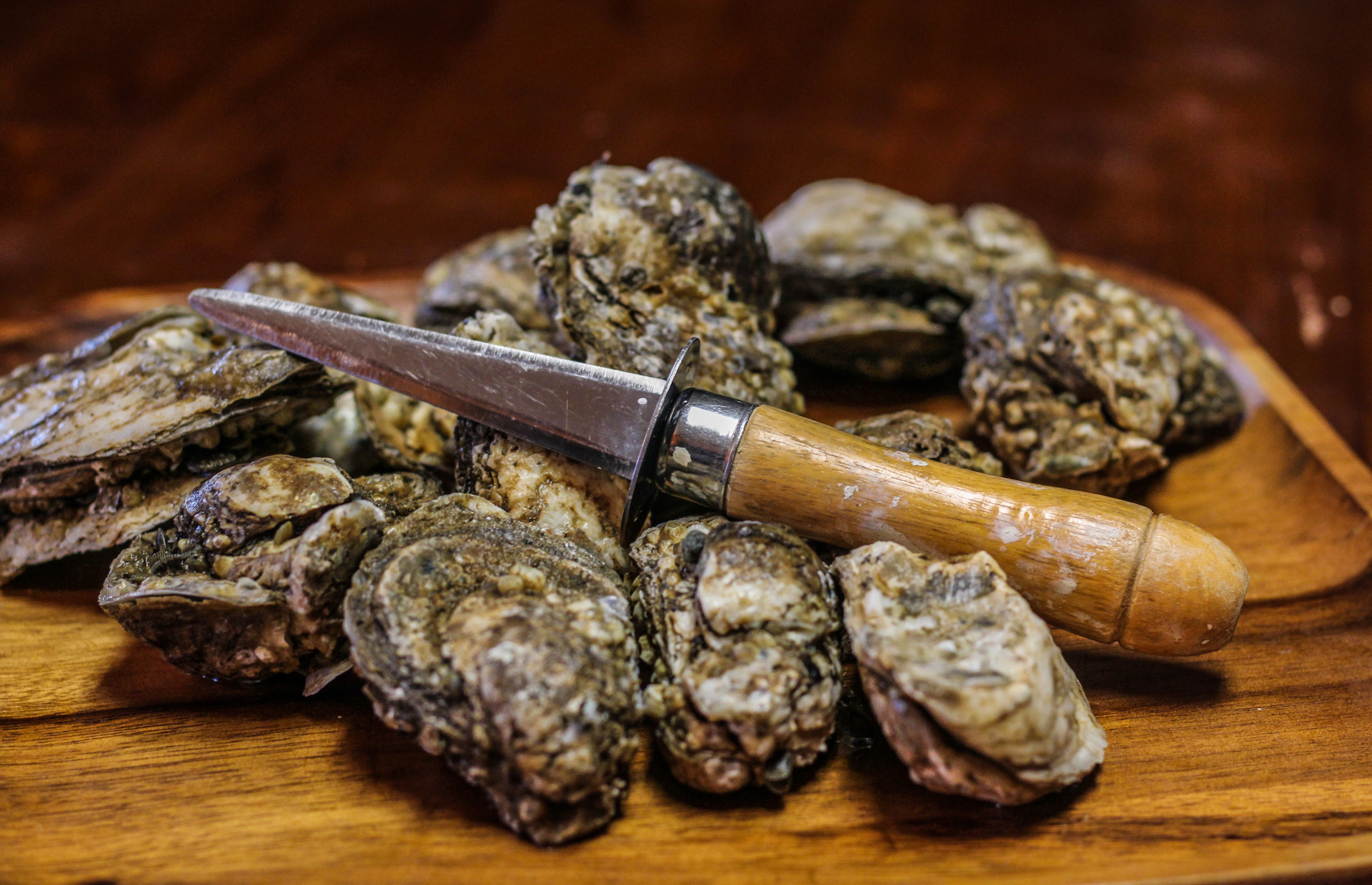 Having worked in oysters businesses in Maldon, Essex and at London’s Borough Market, Bobby has shucked thousands of oysters in his time: “What I learned in Essex was, you put the point of the blade into the hinge where the oyster comes down to a point. The oyster is cup-side down, like in the fridge.”

“Wrap it in a tea towel if you're at home, put pressure down on the oyster with your non-knife hand, then put the knife into the point. There’s a little dark bit between the top shell and the bottom. Put the knife in a few millimetres and just chisel in until you feel the knife's in there.” 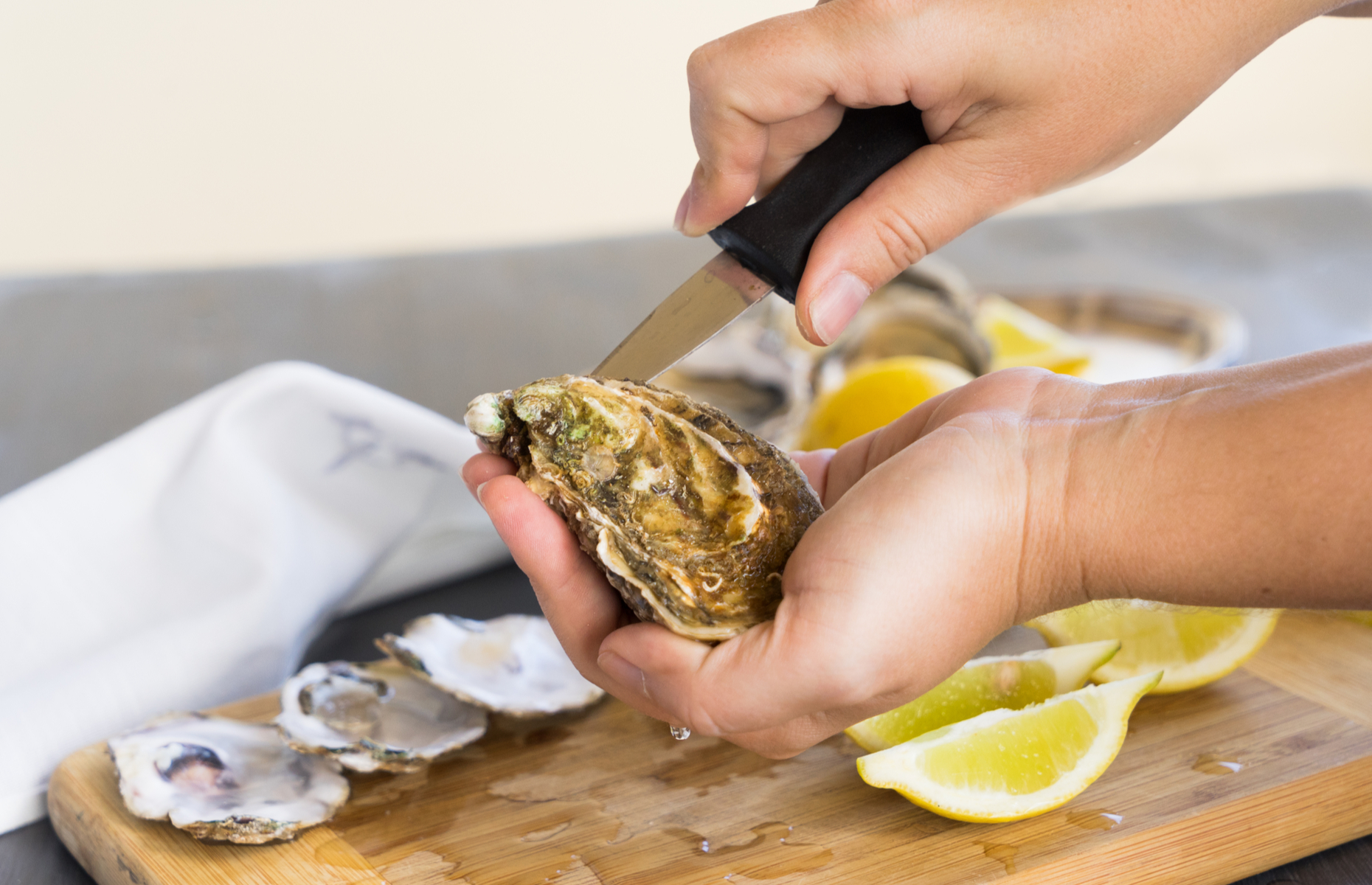 He adds that you don't need to use a huge amount of pressure. The more pressure you put down on the oyster with your non–shucking hand, the more you're just prising the shell open with your knife hand: “Move the knife round slightly in a shallow U-shape and the shell will pop open. Cut the muscle off the top and off the bottom shell, and it's good to go.”

If serving them at home, putting ice or salt on the plate underneath the shells stops them rocking around.

Do you ever find pearls in oysters?

Oysters make pearls when a bit of grit gets inside – it’s a way for them to protect themselves that results in something we treasure. Having shucked thousands of oysters during his career, Bobby’s found several but, for him, the real prize is the oyster.

How to eat oysters

You don’t need to serve oysters with anything, necessarily but you can add a vinaigrette dressing with shallots called a mignonette, olive oil, or lemon or lime juice. Tabasco is a popular condiment. For a Thai-inspired twist, whip up a dressing with chilli, fish sauce, lime juice, garlic and coriander.

You can also grill or bake oysters for traditional dishes like oysters Rockefeller (baked or broiled with a rich butter and parsley sauce, and breadcrumbs); put them in stir-fries (like you would with prawns); or beef pies. 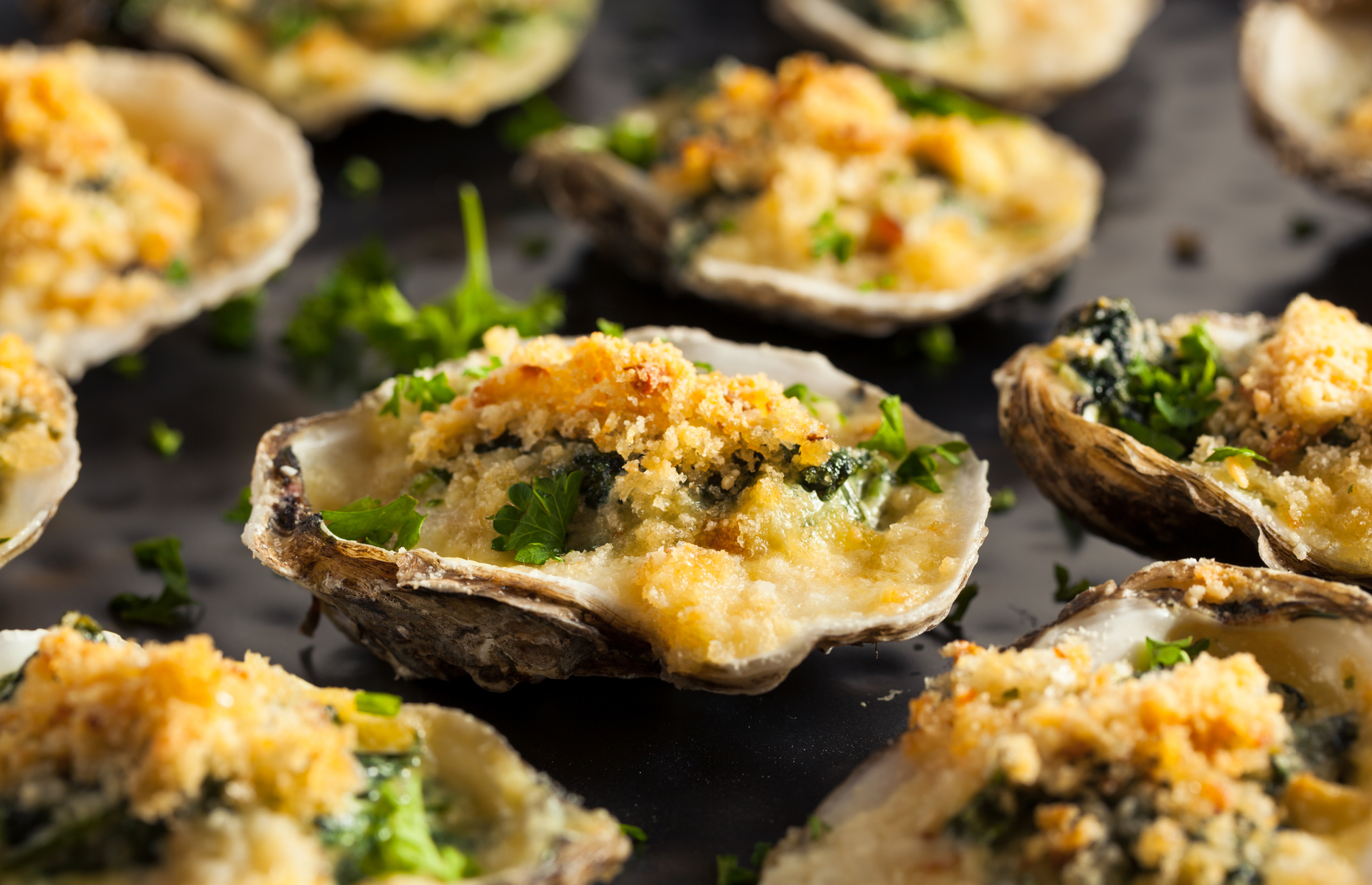 One recipe in Bobby’s book is for something he calls the Iberian oyster: “It's three raw ingredients: tomato, olive oil and salt. Cut a beef heart tomato (a chewy, squishy one) in half, get all the seeds out and grate the flesh into a bowl. Add really good olive oil to taste, sprinkle it with sea salt and mix together. When you've got your oysters ready to go, heap a healthy teaspoon on top and finish it with a last drizzle of oil.” 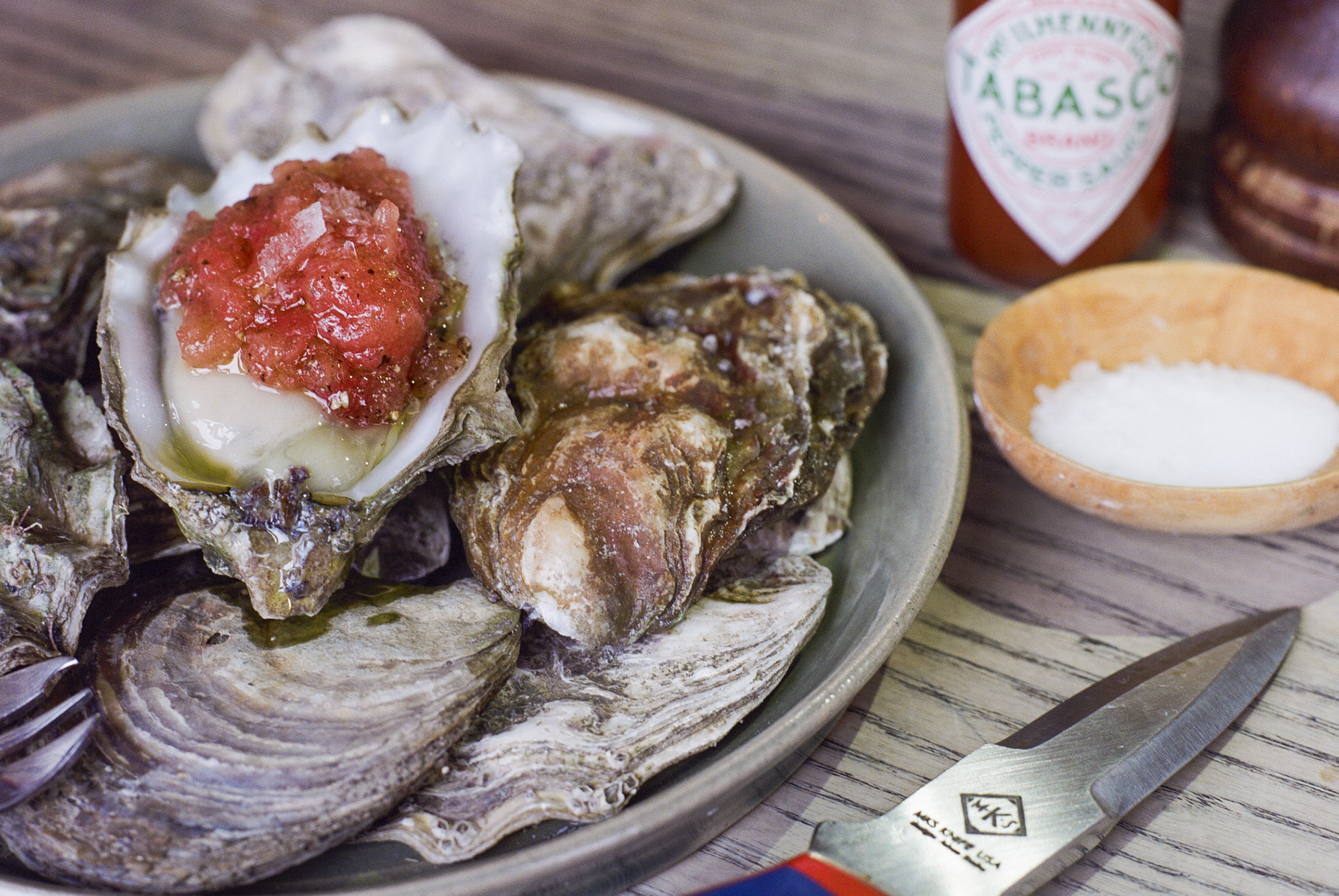