A complete guide to parmesan

There's more to the hard cheese commonly used to grate over pasta than meets the eye (and way more interesting ways to cook with it too). Read on for our ultimate guide to parmesan...

Parmesan is a pale yellow, straw-coloured hard cheese with a naturally-formed hard rind made with cow’s milk. Its texture can depend on how long its been aged – the older it is, the more granular and crystallised. 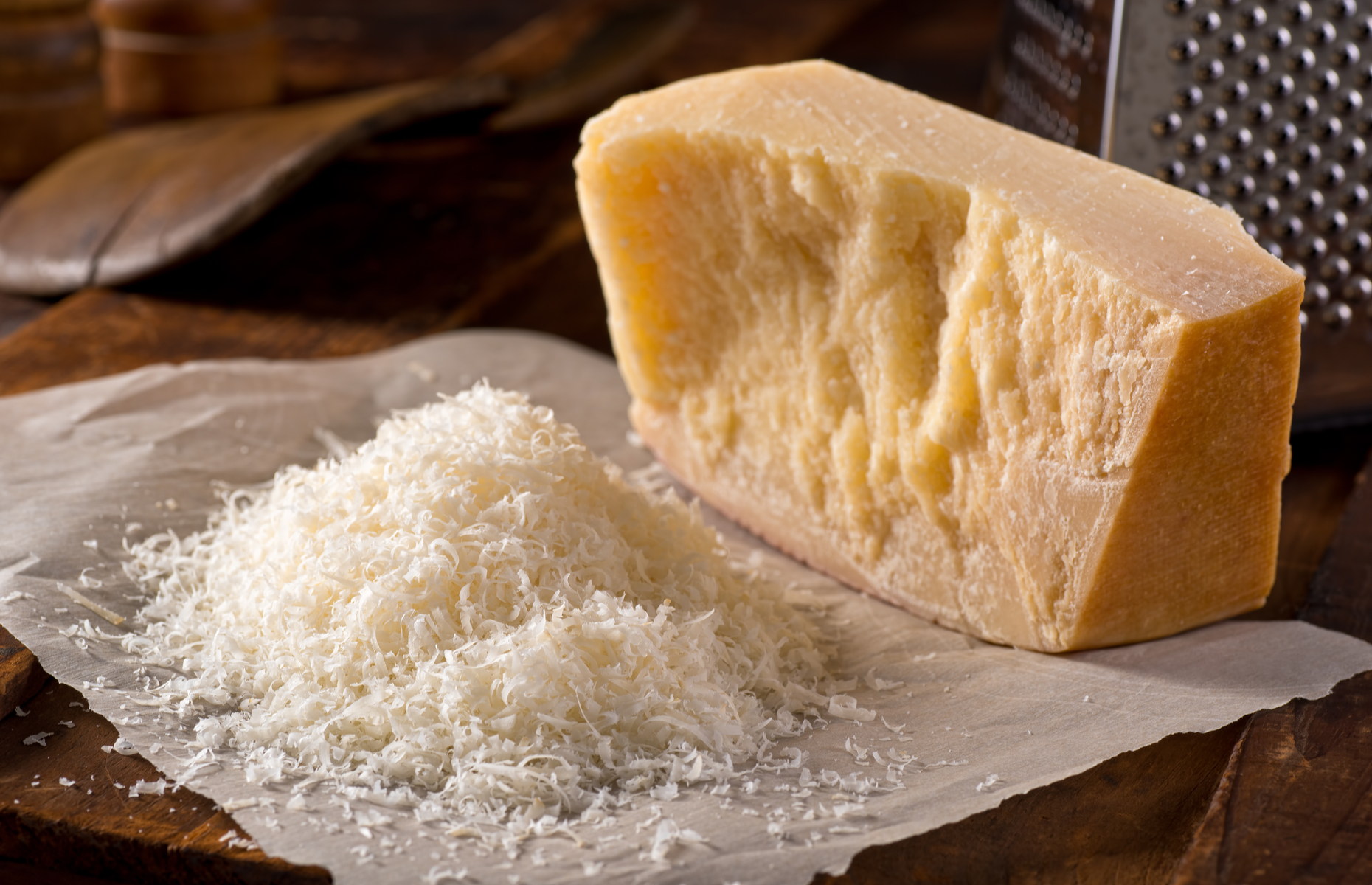 It packs a strong umami punch with rich, creamy notes which makes it ideal for grating over pasta, in pesto, as a crust for baked meat or fish, and shaving over salads. Or, just enjoy it on its own with a glass of dry sparkling wine or as part of a cheeseboard.

However, not all parmesan is created equal...

What is authentic parmesan?

Parmigiano Reggiano, also known as the king of cheese, is the original parmesan. A Protected Designation of Origin (PDO) food, it’s made in northern Italy, exclusively in the provinces of Parma, Reggio Emilia, Modena and parts of Mantua (to the right of the Po river) and Bologna (to the left of the Po river). The cows whose milk is used to make the cheese must be reared on locally-grown feed. Silage (fermented, high-moisture stored fodder) as feed is banned. 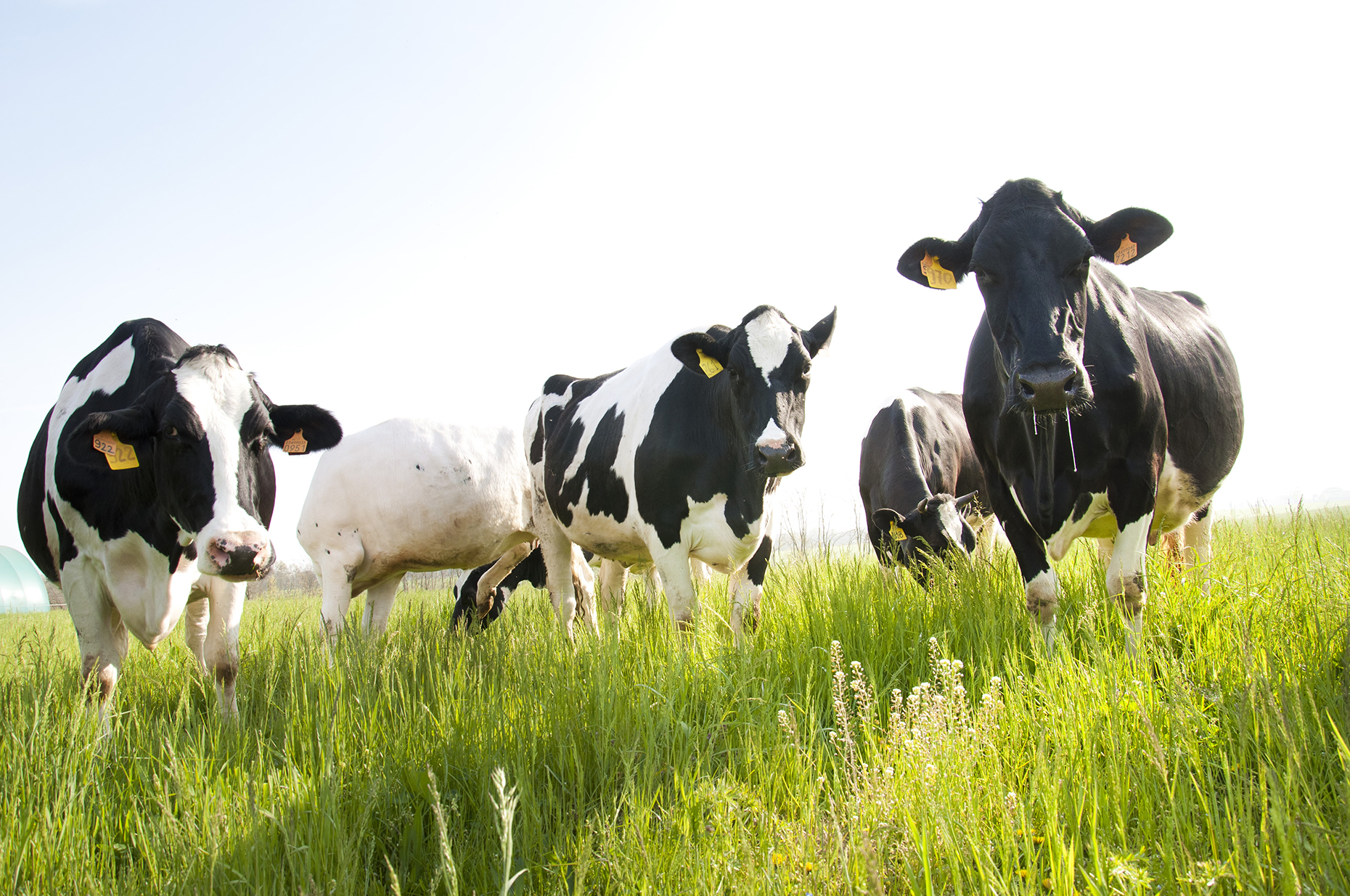 Courtesy of Consortium of Parmigiano Reggiano

Parmigiano Reggiano is made to specific regulations and techniques (see the How parmesan is made section further down), and all wheels of cheese must be approved by the Parmigiano Reggiano Consortium. Wheels are tested by tapping the cheese with a small hammer. Officials check it sounds the same all over and there are no hollow-sounding spots.

The rinds are branded with the official Parmigiano Reggiano stamp and individual codes so the cheese can be traced back to the particular dairy where it’s been produced. 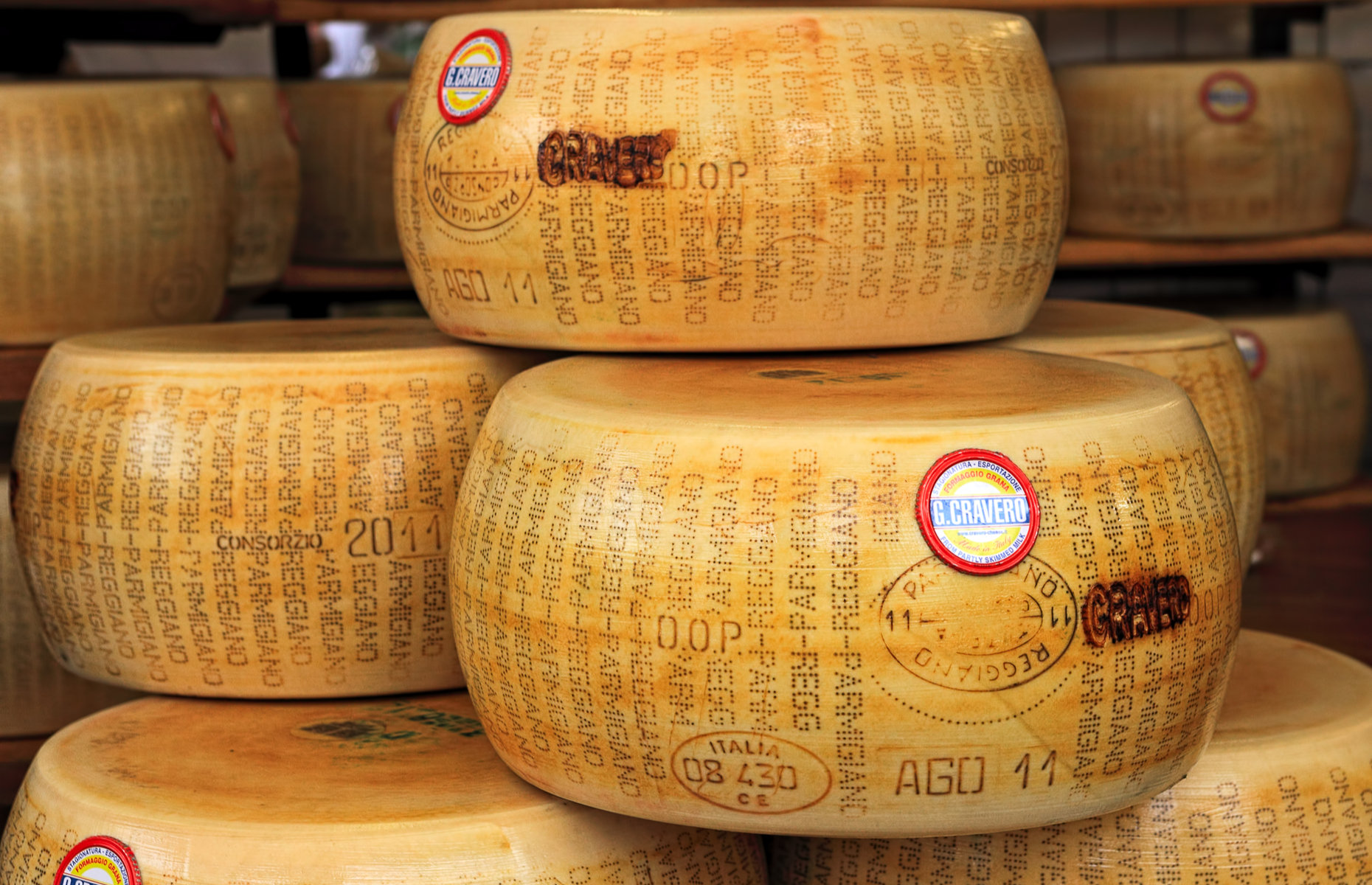 Any parmesan without the Parmigiano Reggiano PDO name and stamp is not authentic parmesan. Grana Padano is another similar Italian PDO hard cheese but is made in a different area and cows are allowed to be fed silage.

Sorry veggies but proper parmesan is not vegetarian. During the production process, calf rennet is added as an enzyme to help produce the curds (when milk curdles, this is the solid part which becomes separated from the liquid whey and will eventually form the cheese). However, vegetarian versions of Italian hard cheese are available in most supermarkets – it just won’t be Parmigiano Reggiano.

How is parmesan made?

Parmigiano Reggiano has to be made in a certain way to receive the official stamp of approval from the Consortium. But this doesn’t mean that every cheese tastes the same – producers can choose whether to add salt, cheeses are left to mature for different amounts of time and of course, every batch of milk is unique and will add its own very subtle flavour profile. 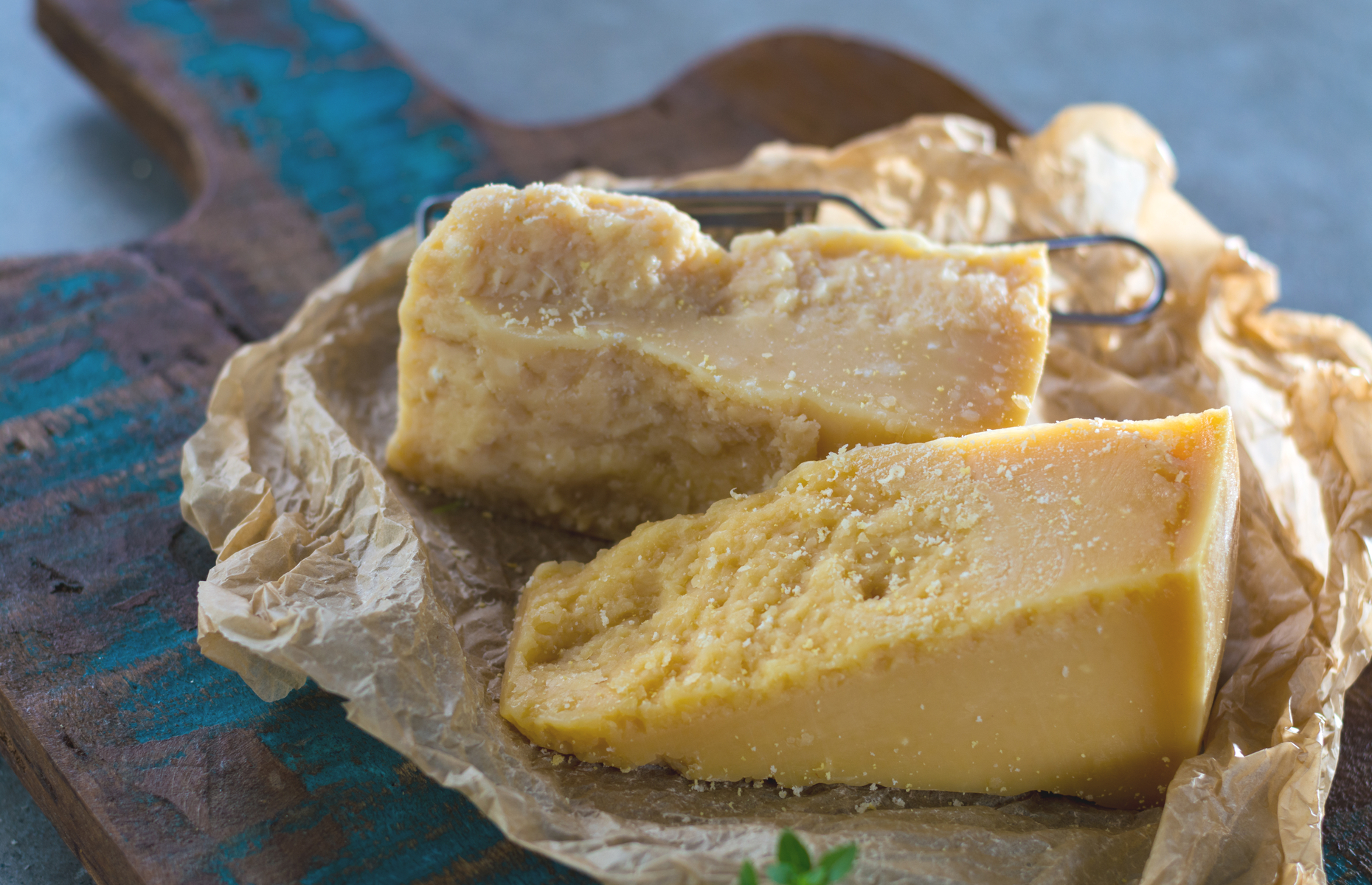 However, the techniques used to make parmesan must adhere to the rules and most of the process is, even today, very manual.

Skimmed milk from the evening milking (the skimmed fat at the surface is used for butter) and whole milk from the morning milking is poured into huge copper vats. Enzyme-rich calf rennet and whey (that had been separated from the previous day’s curds) are added to curdle and coagulate the milk, and kick-start the cheese-making process.

Courtesy of Consortium of Parmigiano Reggiano

When the milk starts form into curds in around 10 minutes, a huge balloon whisk called a spino is used to break it up. The master cheesemaker will scoop up a handful of curds and squeeze them together to test how they hold.

The mixture is heated to 55°C (131°F) and after the curds have formed together and sunk to the bottom, the cheesemaker will scrape them into a huge piece of cloth and pull it up out of the liquid whey. It’s then cut in two (fondly called ‘the twins’) and each cheese in placed into a mould with information such as the date of production and dairy identification number. 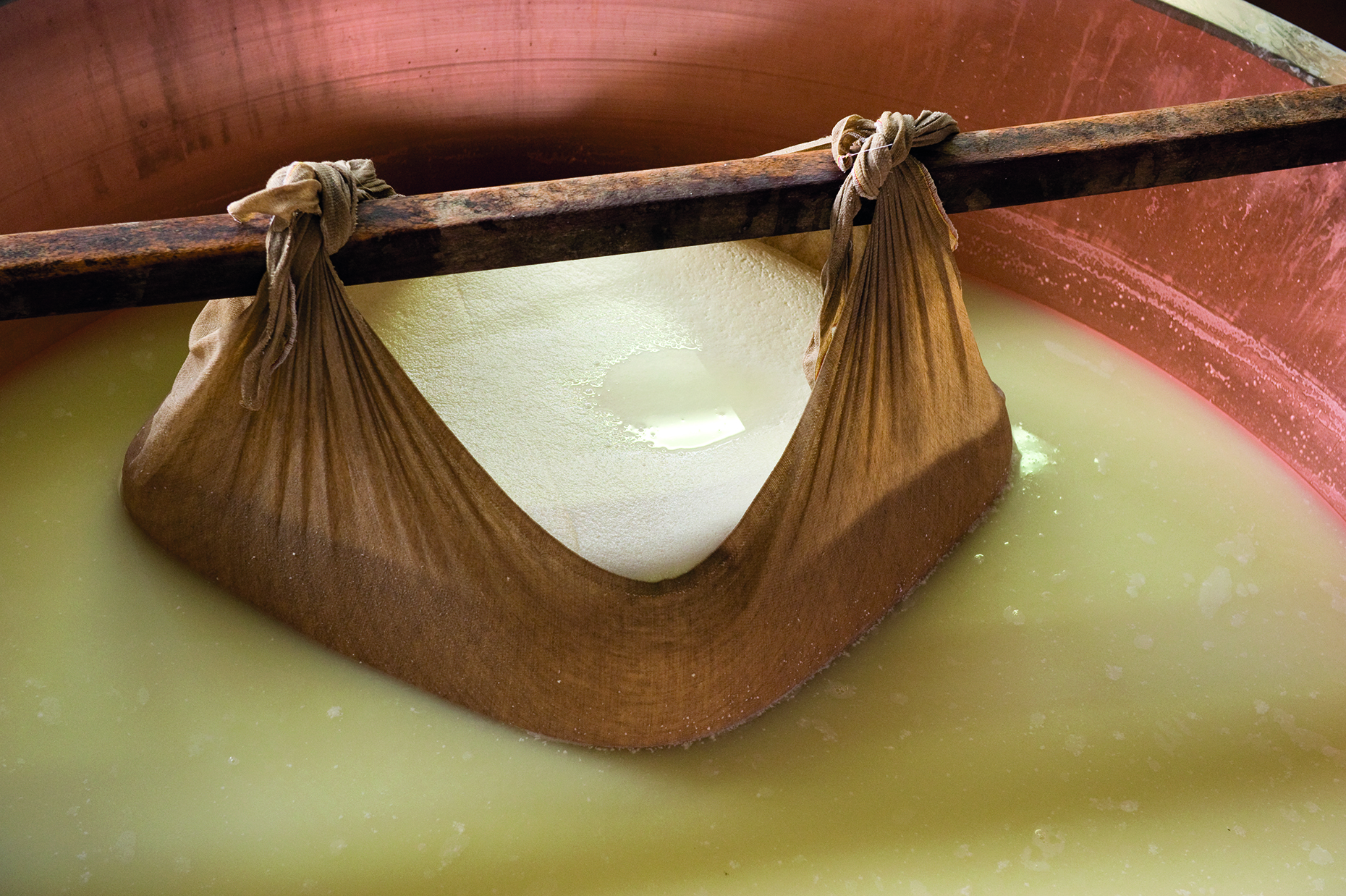 After a few days, the wheels are immersed in a salt brine where it absorbs salt and the rind hardens. It’s then ready for maturation in a temperature-controlled warehouse and after 12 months will be tested to see if it meets the high standards and gets the (literal) stamp of approval. 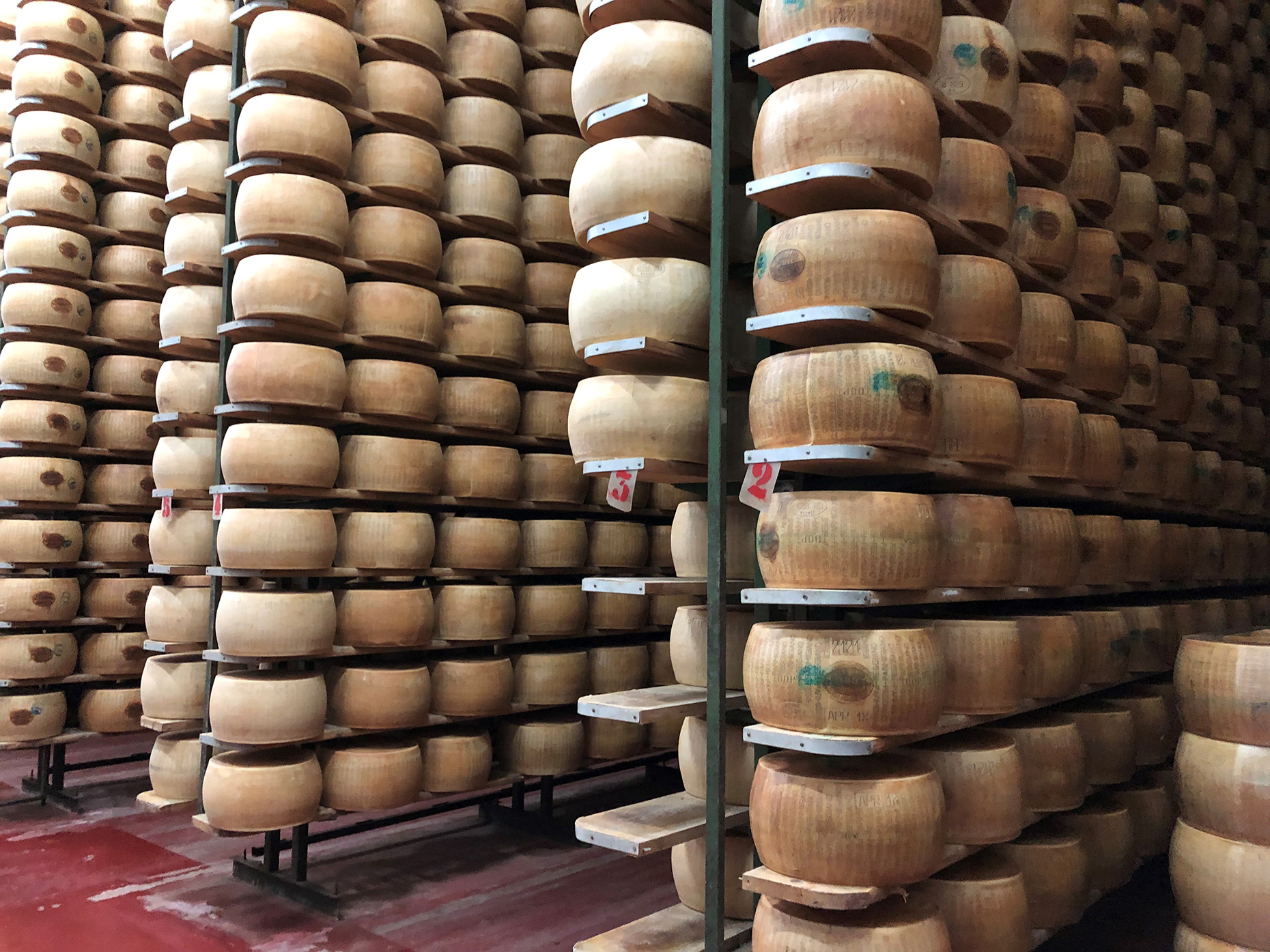 How to buy parmesan

When buying parmesan, look for the official Parmigiano Reggiano branded rind to ensure you’re getting the real deal. If there isn’t a stamp, it’s not been produced according to the PDO regulations or it’s an imitation hard cheese.

The flavour and texture of parmesan varies according to how long it’s been aged. Most wedges of supermarket branded Parmigiano Reggiano are 18 to 20 months-old but if you head to a cheesemonger, you’ll often be able to buy more or less matured cheeses.

Can’t decide which cheese to buy? Our handy guide below explains the main differences.

12 months: the youngest cheese, it’s smooth in texture and has an aroma of fresh milk. It’s slightly acidic in flavour.

24 months: this would have had two summers in the warehouse to mature so has a sweeter flavour and a firmer, slightly granular texture. Close your eyes, take a sniff and you’ll smell pineapples.

36 months: the crème de la crème of parmesan, this more mature parmesan has a nutty, spicy aroma, a punchy flavour and a very noticeably gritty, crunchy and crystallised texture.

The image below shows the three main ages of parmesan. From the top right clockwise: 12 months, 24 months and 36 months.

How to store parmesan

Parmigiano Reggiano is usually sold vacuum-packed to best preserve the flavour and texture. Once opened, wrap in clingfilm (plastic wrap) and keep in an airtight container in the refrigerator. 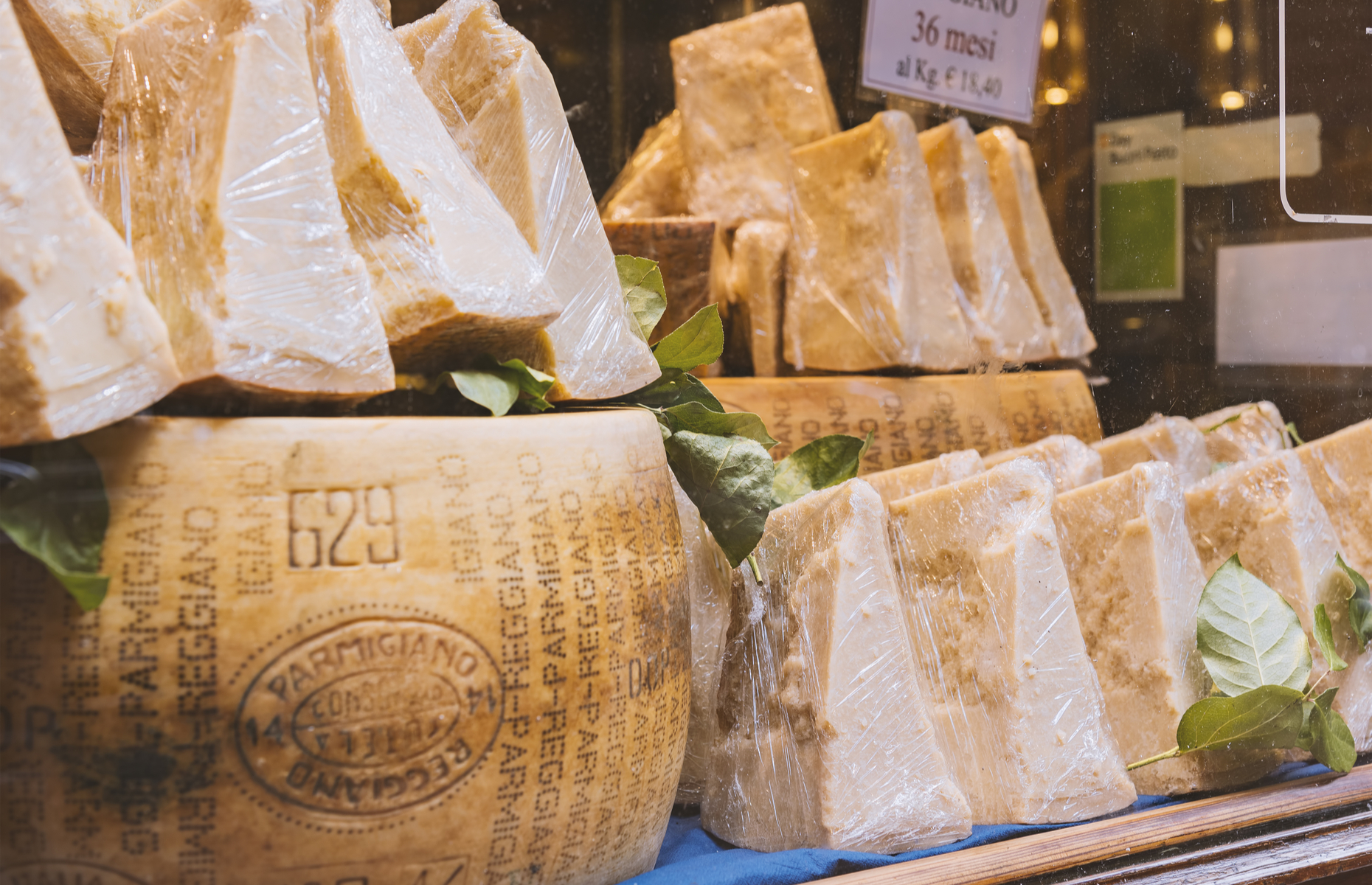 Loosely unwrap the clingfilm (so it doesn’t sweat) and let it come up to room temperature before serving or using again.

What can I do with parmesan?

A more mature parmesan (24 months plus) has a complex, deeper flavour so best enjoyed as an apéritif or dessert cheese. However, younger cheeses (which are also less expensive) are great and more economical for cooking.

Parmesan adds a salty, umami element in crusts for meat or fish. It can hold its own so works well with rich meats like a rack of lamb with a rosemary, breadcrumb and parmesan coating, or poultry. Try this fragrant herb, hazelnut and cheese-crusted chicken. 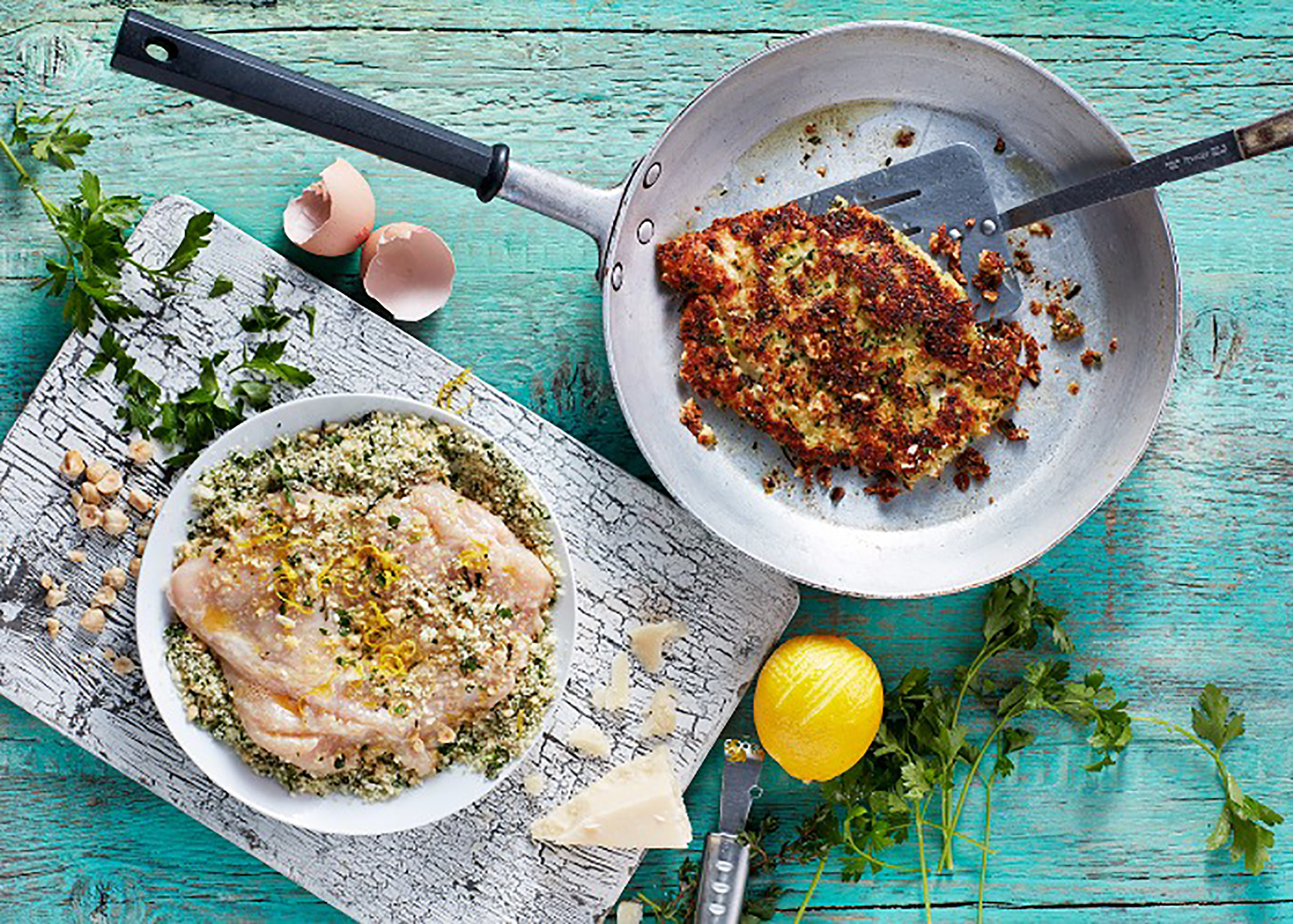 Too Good To Waste/Watkins Media

It also adds a piquant note to rich and creamy dishes, demonstrated beautifully in this jalapeño, cheddar and parmesan toastie, and this crispy chilli and parmesan polenta. 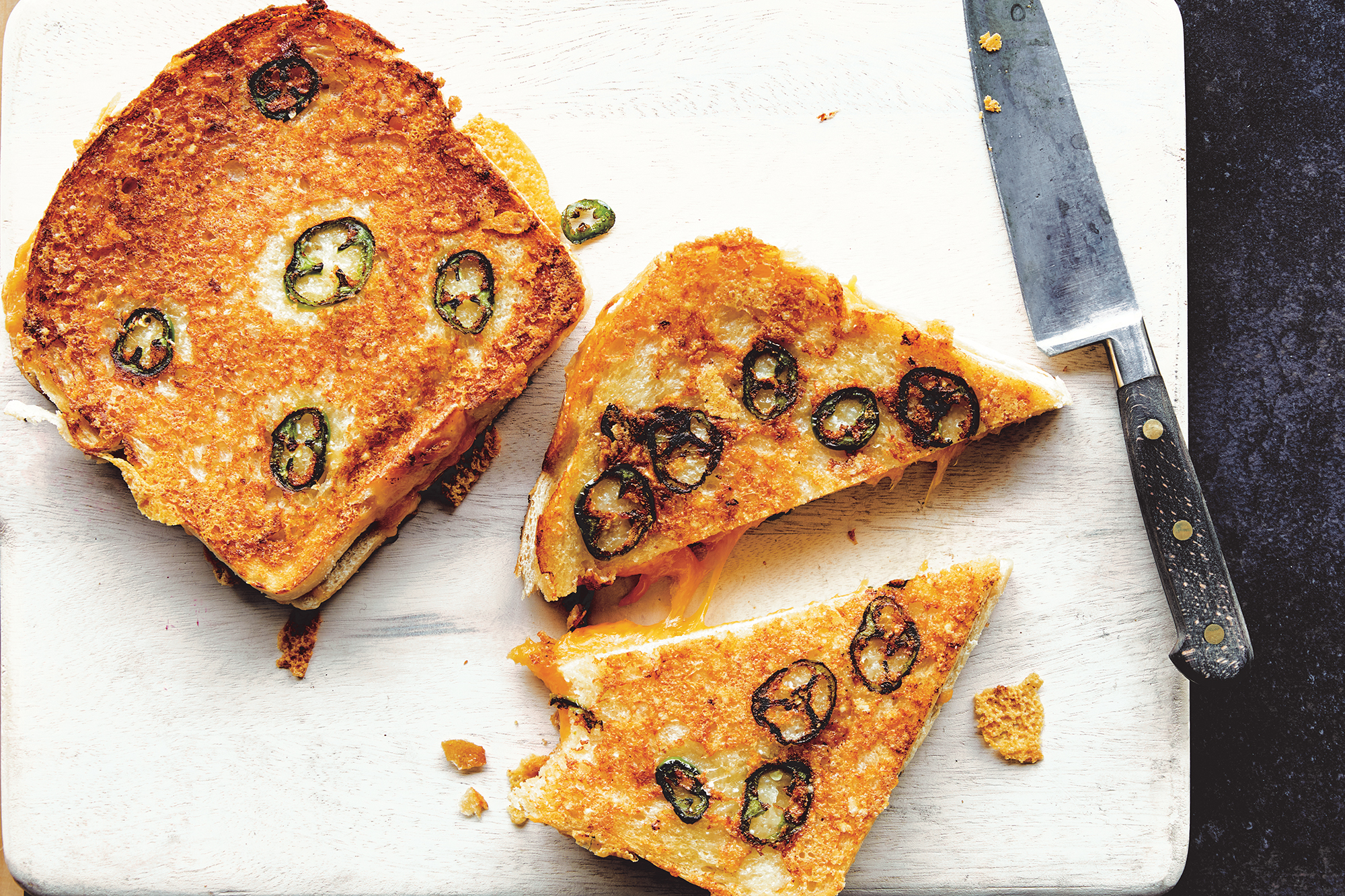 Shavings of the hard cheese over salads, pasta and baked as crisps are among the most simple ways of using parmesan and letting the ingredient shine.

For a quick light lunch or dinner, you can’t beat tagliata – thin strips of flash-fried steak with rocket, parmesan and a fresh lemon dressing. Rigatoni with amatriciana sauce (a tomato-based sauce traditionally made with guanciale) is great finished with a generous grating of cheese.