A complete guide to fennel

Excellent when roasted, pickled or simply shaved raw, fennel is one of those ingredients that just makes a dish sing. We take a closer look at its origins and how to choose, prepare and cook with fennel at home.

A perennial herb that’s part of the carrot family, fennel is native to the Mediterranean region, but has been widely used all around the world for centuries. Greeks and Romans strongly believed fennel tea gave warriors courage before battle while in ancient Chinese cultures it was heavily used for its medicinal properties. Some Western pagan cultures also believed its ability to ward off evil spirits and ghosts, so fennel was hung over doors and placed in key holes. Charlemagne, founder of the Holy Roman Empire, was so fond of fennel and its alleged healing power, in AD 812 he declared that all gardens under his rule must grow fennel.

In the late 1700s fennel became one of the key ingredients in a medicinal elixir called absinthe. It soon started gaining popularity as a spirit and became the drink of choice among the bohemians in post-First World War Europe and the United States. Today, the versatile ingredient can be found in professional and home kitchens alike thanks to its aromatic flavour and myriad uses. 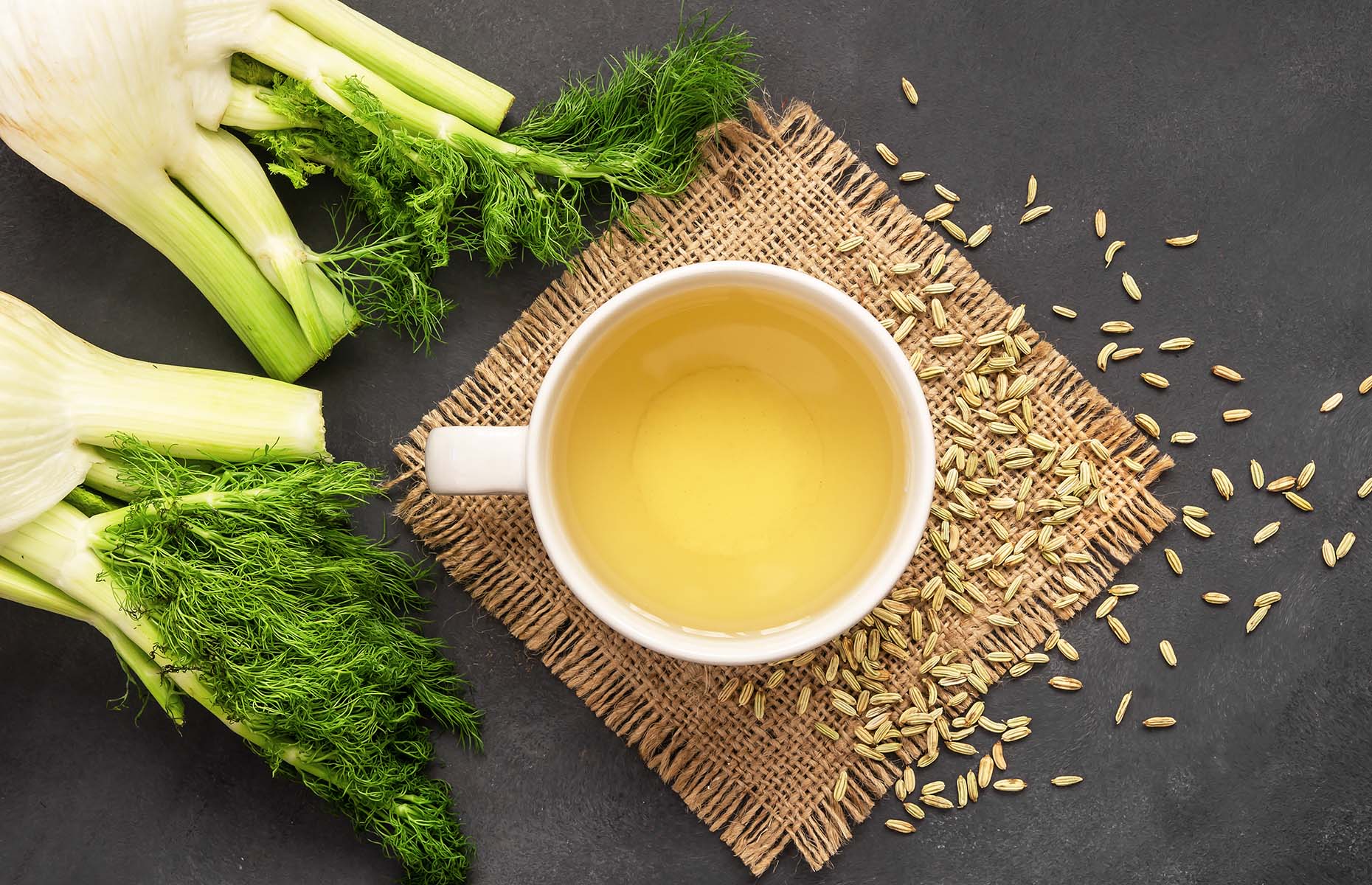 Although part of the carrot family, fennel is not a root vegetable and its thick, crisp bulb grows above ground. The bulb serves as the base for its stalks, that grow light, feathery leaves called fronds at the ends. When fennel goes to seed, you might spot small yellow flowers among the dill-like fronds. Every part of the plant is edible, from the bulb to the flowers, and can be eaten both cooked and raw.

The seeds from fennel are harvested and dried to use as a spice that brings a warm, sweet aroma and slight aniseed flavour. They’re great to use in bread, chutneys and spice mixes as well with fish and vegetable dishes. 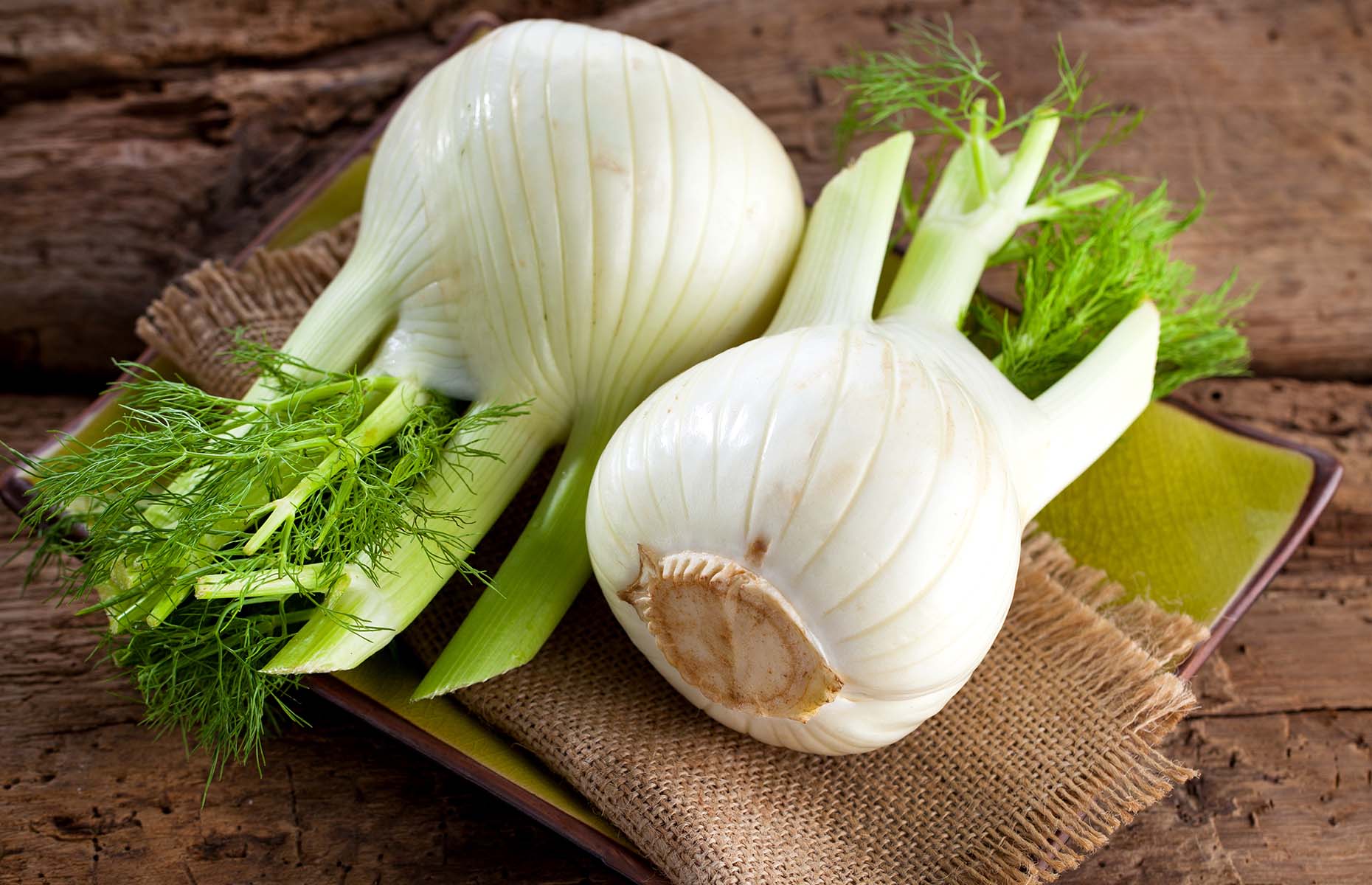 How to prepare fennel

How to choose and store fennel

When buying fennel, start with the bulb. Nina Matsunaga, chef patron at the award-winning The Black Bull in Sedbergh, says you want it to have an almost asparagus-like squeakiness. Make sure it’s plump, tight and white, there’s no discolouration, bruising or soft spots. Check the root bottom – this should have very little browning and the root should cover most of the base. "Ideally, you want to buy fennel that has healthy and intact fronds as well," Nina says. These should be bright green and rather fluffy but with no flowers – usually an indicator a fennel bulb is past its peak maturity.

Antonio Raspone, executive chef at SW16 Bar & Kitchen, says it’s best to use when it’s at its peak quality from June to September. “Using seasonal ingredients can really bring out the flavours in any dish as you’re using the best version of the ingredient,” he adds.

If the fennel hasn’t been trimmed already, do that at home, leaving around two to three inches of the stalks and save the fronds for garnish and salads. Nina advises shocking them in some ice water, so they retain their vibrant green colour. Wrap the bulb loosely in paper towel or plastic bag and keep in the fridge for up to five days. 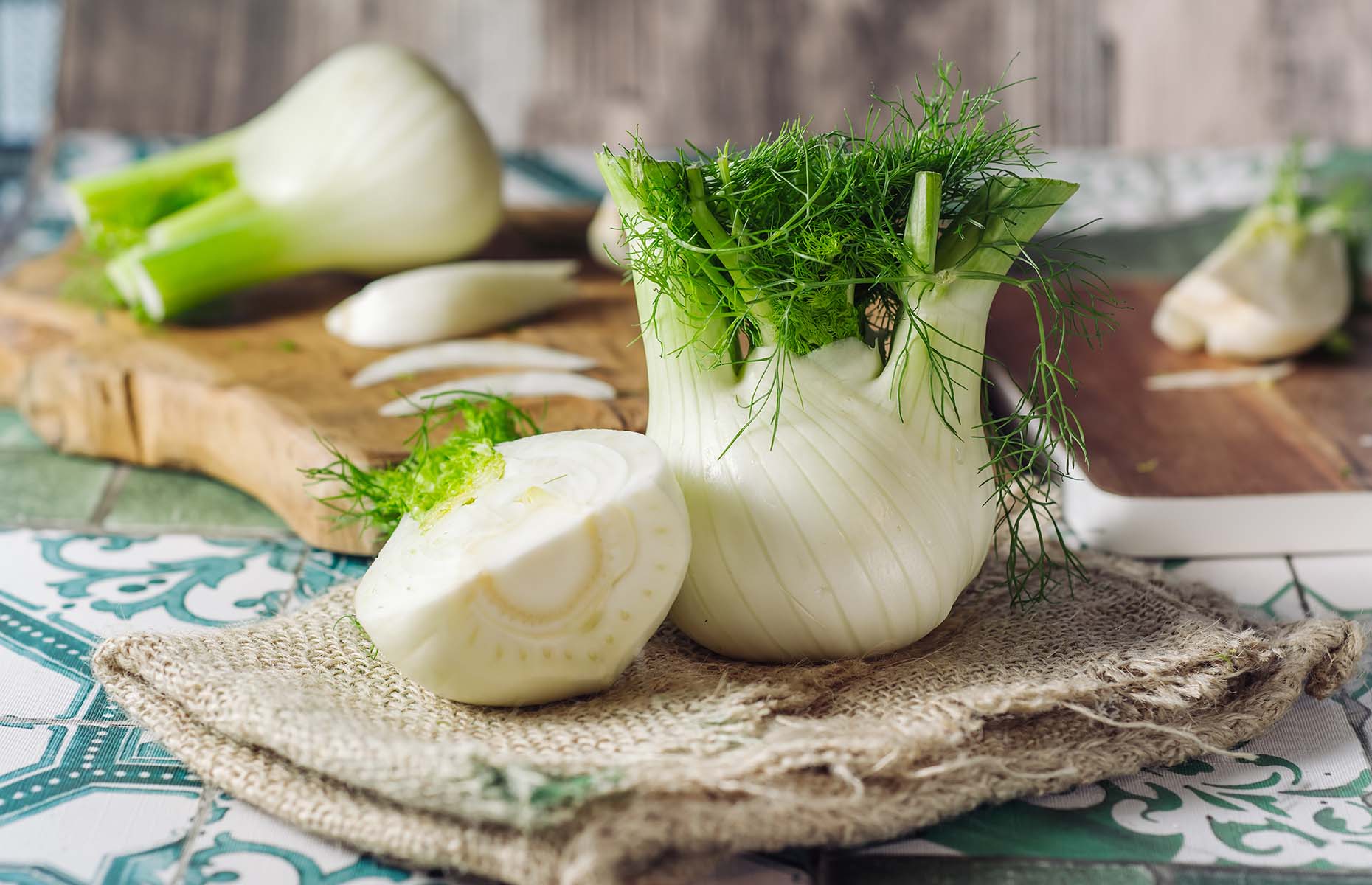 How to cut fennel bulb

Before preparing fennel, decide how you're cooking it. Salads call for thin, almost see-through shavings of raw fennel. This will also work great if you want to pickle or sauté it – the shavings will caramelise nicely and have that melt-in-your-mouth texture. Ideally, prep it on a mandoline slicer and get rid of the tougher core pieces. Antonio advises to use a little water and lime juice on cut fennel to keep it from any discolouration.

If you want to roast fennel, the best way to do this is to cut the bulb into wedges. First, cut off the stalks if you haven’t done that already and slice in half vertically. Then chop each side into four to six wedges, depending on how big the bulb is.

Make sure you don’t toss the stalks and fronds out. The stalks can be cut and used in the same way you would cook celery stalks and fronds will work great in anything from salads to pasta – you can even use it to flavour broths and garnish soups. 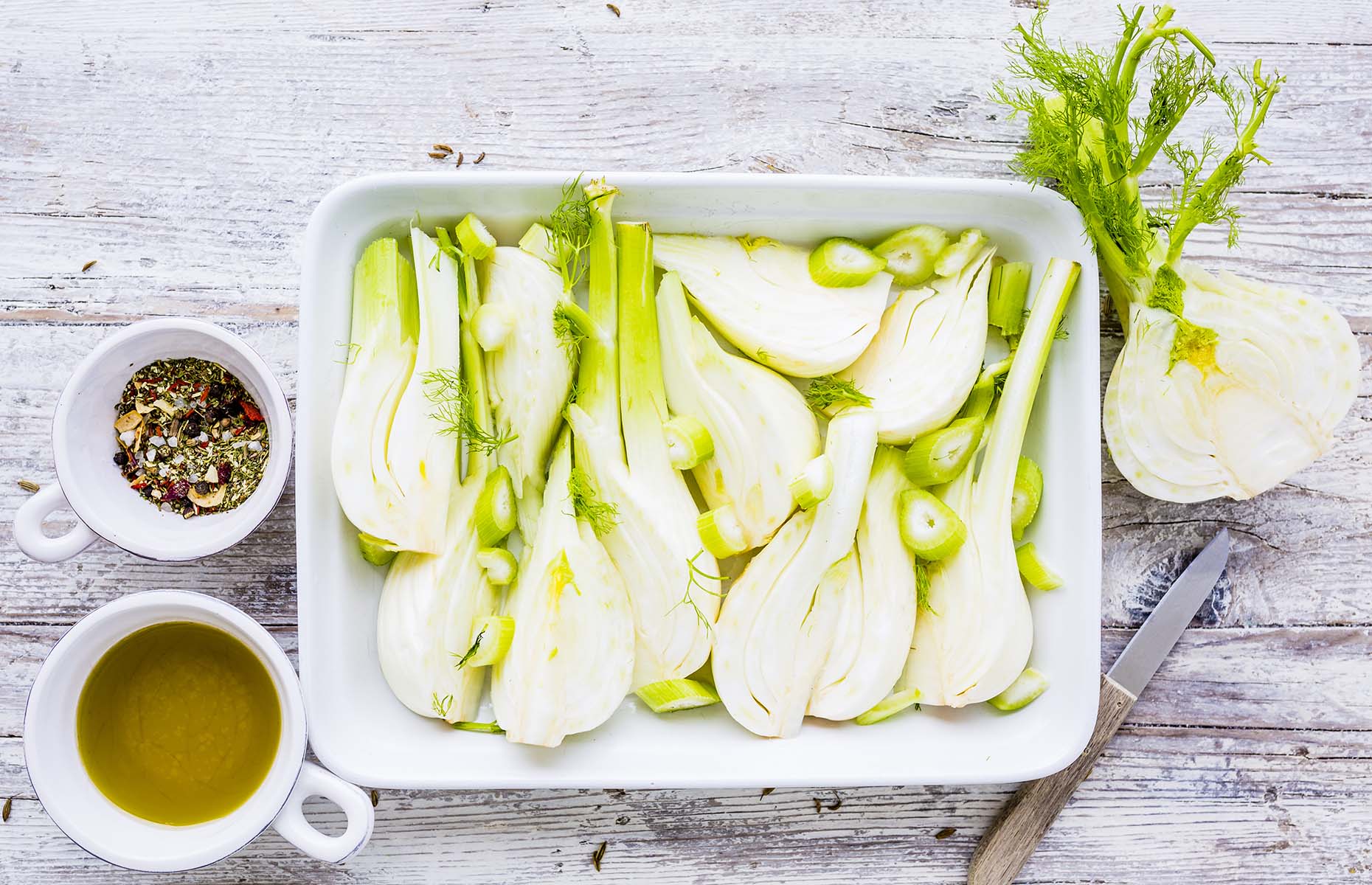 How to cook with fennel

Fresh fennel has quite a strong anise flavour that slightly resembles liquorice with a citric sharpness and distinct bitterness. It’s fresh and crisp so works really well shaved into salads with complementary flavours – Antonio’s go-to is a citrussy dressing that pairs perfectly with the flavour profile of fennel. It can also be served with fatty cuts of meat to help cut through the richness and its citrusy notes are a great match for fish.

Fennel is a great vegetable to pickle as it’s hardy enough to take on the pickling flavours and doesn't go too limp or soggy. An excellent addition to barbecued meats or grilled oily fish, pickled fennel will also keep in the fridge for a couple of months – perfect to have on hand throughout summer grilling season.

“Pickled fennel lasts a while and is a nice addition to any home cook’s fridge as it’s perfect for adding to sandwiches, roast meats and curries,” Nina says. Most recipes call for cider or white wine vinegar paired with sugar and orange zest as well as aromatics like garlic, black pepper, red pepper flakes or mustard seeds. 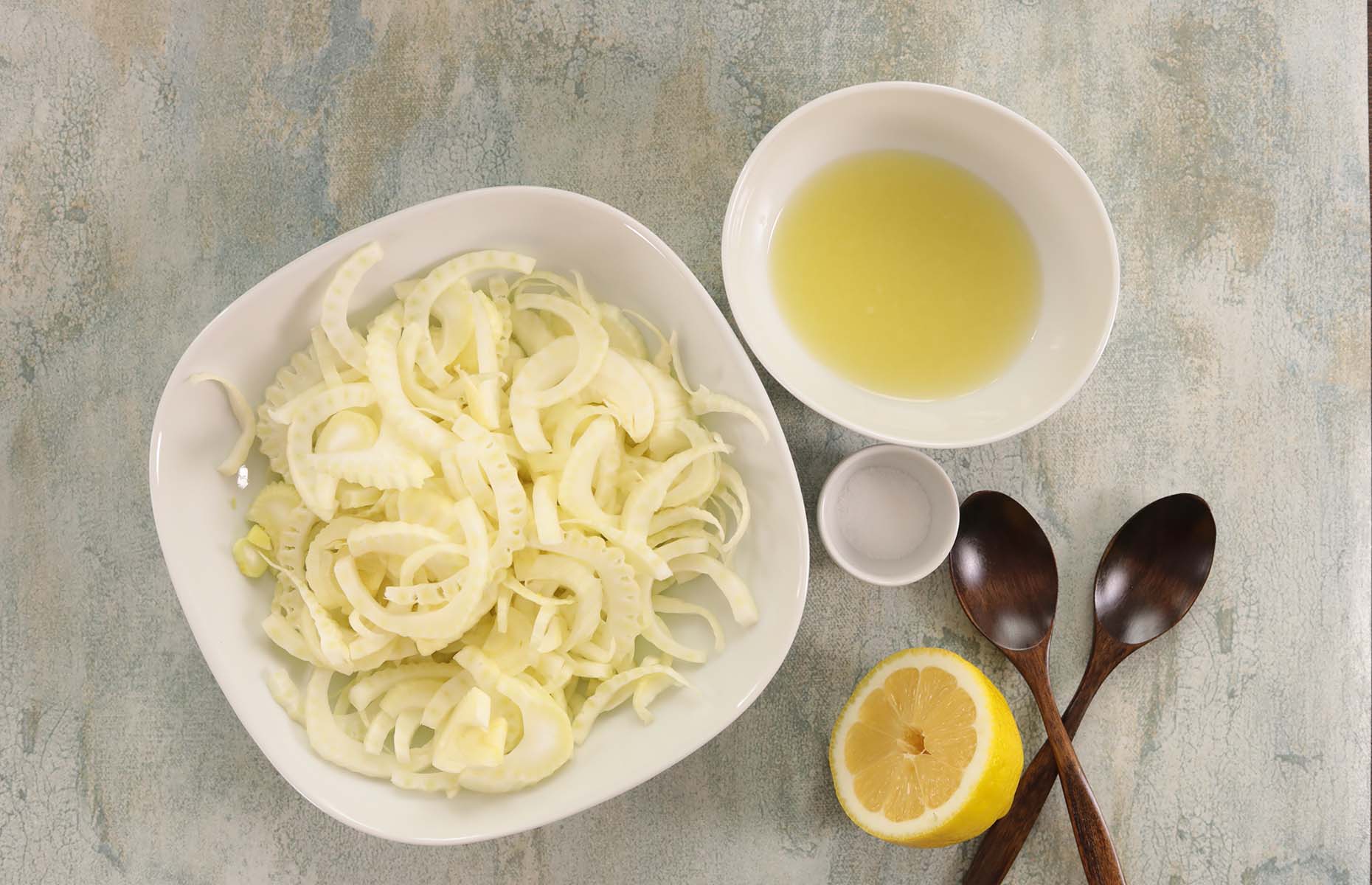 When braised or sautéed, the sharpness of the fennel turns into sweetness and the overall flavours become more rounded and mellow. When matching ingredients think of warming Mediterranean flavours, like tomatoes, red peppers and onions. Sautéed fennel pairs well with pasta, especially shellfish, and is great in gratin-style dishes. Nina suggests trying it braised in butter and stock, or with a touch of vinegar.

Roasted fennel takes on even more of that warming flavour and develops a caramel-like sweetness, especially where the edges are allowed to catch a little. To roast, toss with olive oil, salt and pepper and roast at 200°C for around half an hour – keep an eye on them so they don’t catch too much colour. You want them to be very light golden with some dark edges. It’ll work a treat as a side to roast chicken. 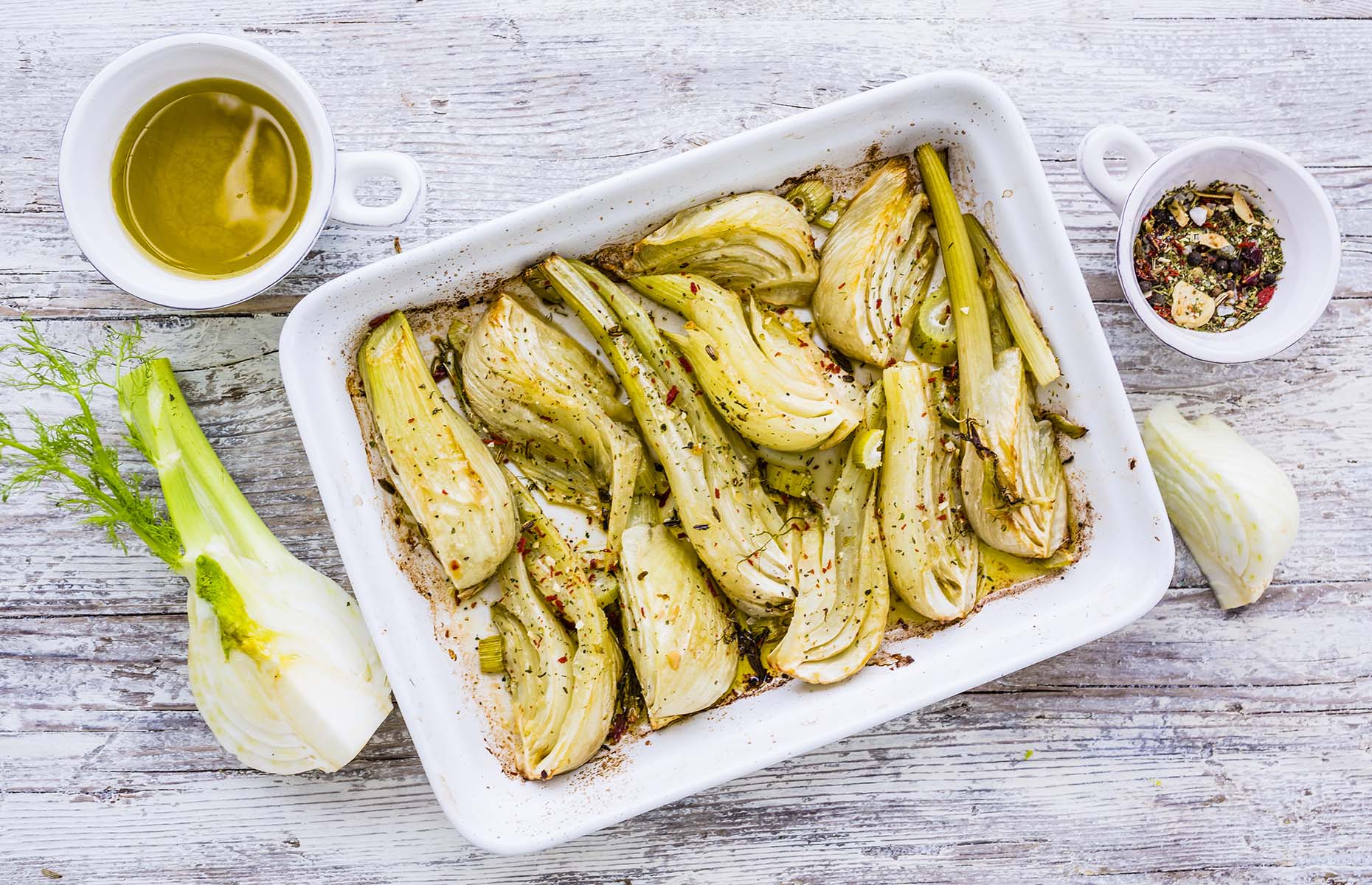 Our best recipes with fennel

For a taste of raw fennel's incredible, fresh flavour, try it in a salad with golden beetroots. The sweetness from the beets combined with the raw fennel is a match made in heaven when topped with a zingy citrus dressing that brings the dish together. This is particularly great as a part of a summer barbecue spread. You can also try fennel in a refreshing take on classic coleslaw or pair with the sweetness of crab meat and the zestiness of orange. 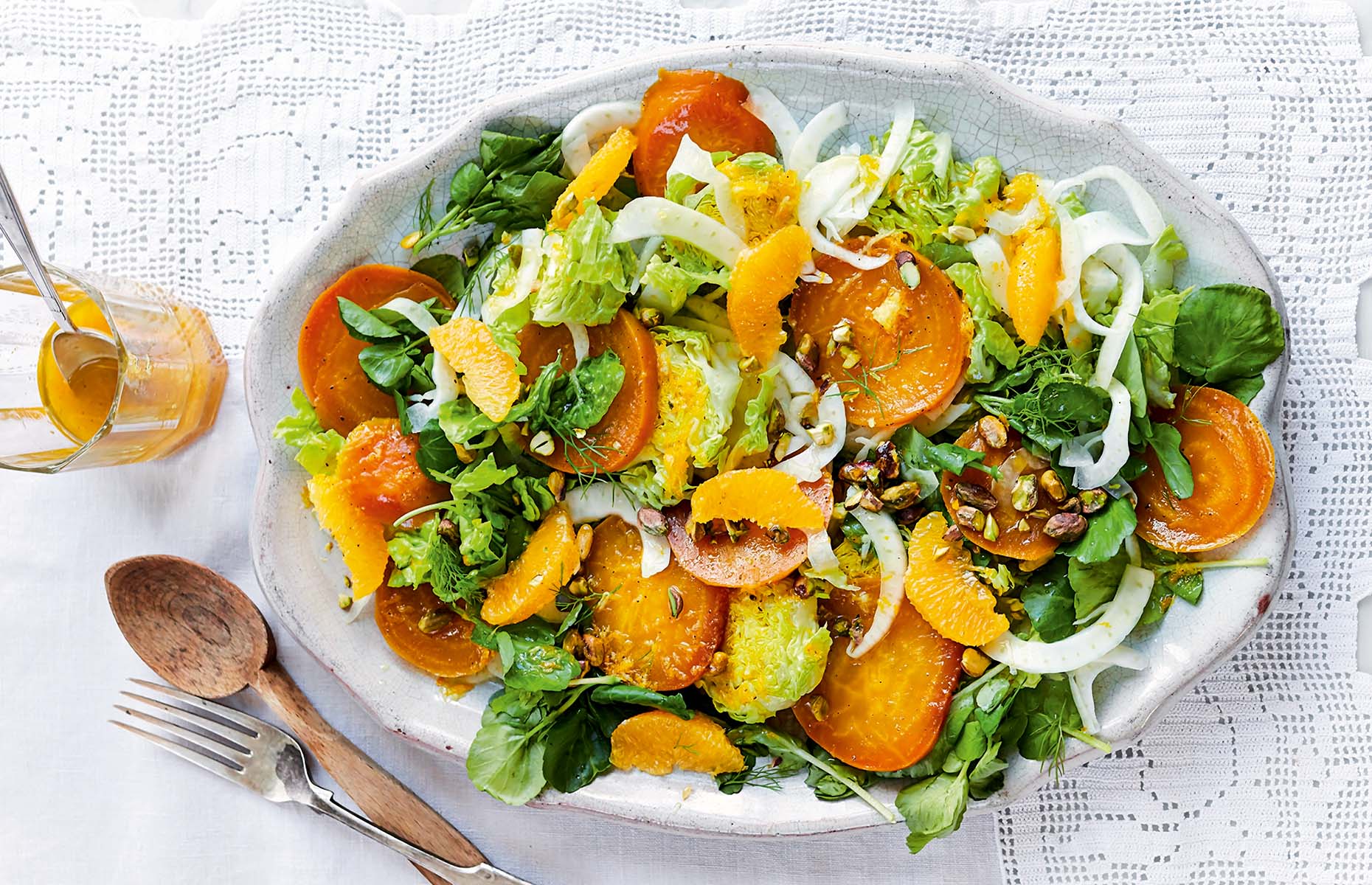 Roasted fennel's sweet notes work incredibly well with a selection of roasted roots, dressed in garlic, sage and rosemary. These earthy flavours will be a fine accompaniment to any roasted meat. Fennel can also be used as the bed for roasting meat like in this roast pork belly recipe. For a lighter take on roasted fennel, try a one-pan bake of new potatoes, fennel, asparagus and sausages – excellent for when you're short on time.

The lightness of fennel pairs incredibly well with the richness of butter and cream so it's an excellent addition to gratins and similar bakes. Try it with leek and Parmesan or in an indulgent pasta bake with Parma ham. 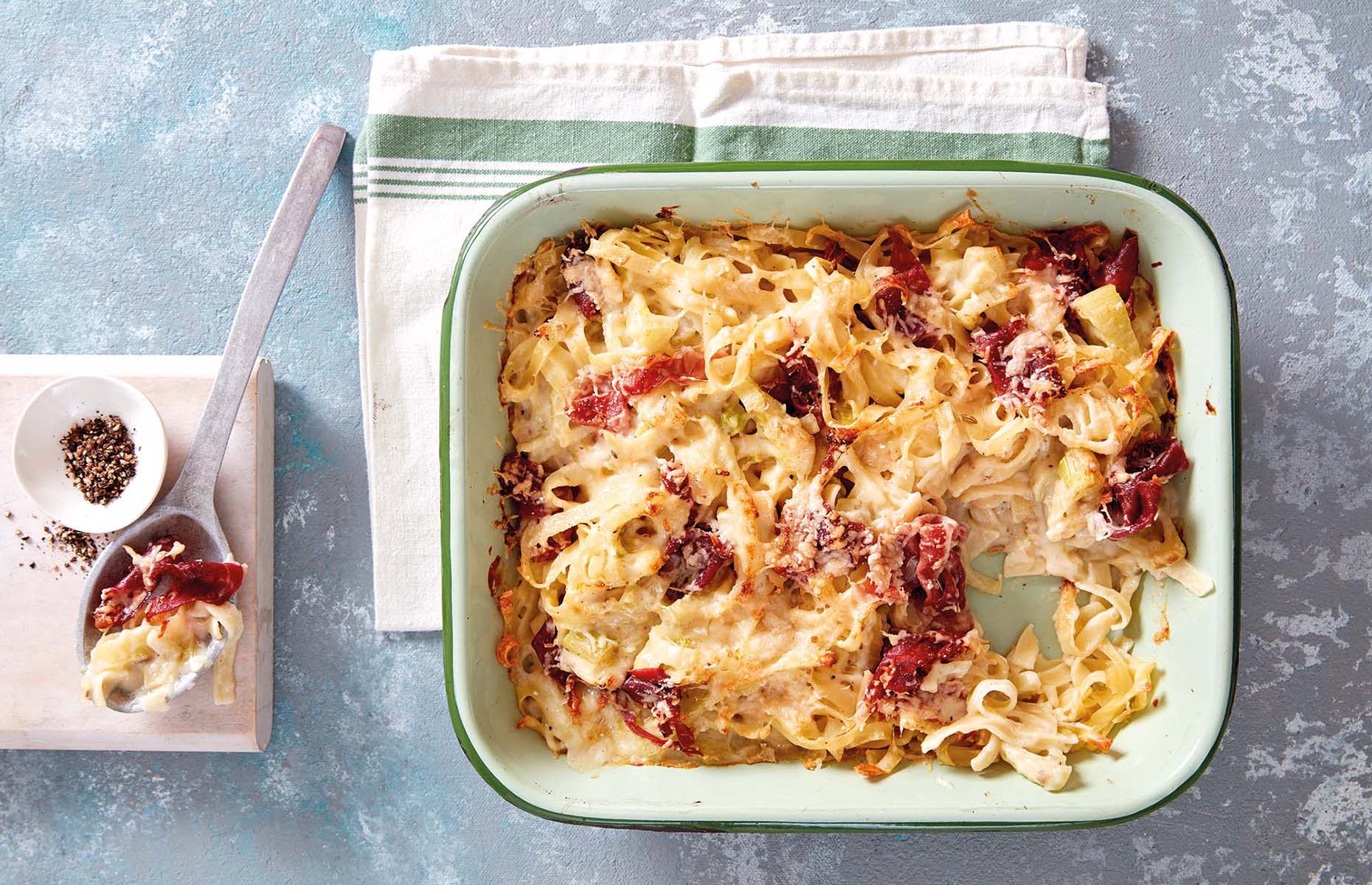 Don't forget to add any leftover fennel stalks or bulbs to a vegetable stock and add a jar of fennel seeds to your spice rack – these can be used for marinating chicken, to flavour slow-cooked lamb, to add depth to a rich meat ragù or to add fragrance to a slow-cooked short rib pho.