A complete guide to artichokes

A fascinating but often intimidating ingredient to cook with, artichoke often gets called the oyster of the vegetable world: the outer layers hide an incredibly delicious but hard-to-get-to centre, celebrated for its subtle sweetness and nutty flavour. Here’s how to choose, prepare and cook artichokes as well as a few recipes to try.

A short history of the artichoke

Native to western and central Mediterranean, artichokes have appeared on dining tables since at least the days of Ancient Greece and Rome. According to a Greek myth, it was none other than Zeus who created the artichoke, but today’s varieties are actually thought to be descendants of the wild cardoon – a tough, prickly thistle native to north Africa and Sicily.

Although the vegetable, which is actually the bud of a flowering plant, fell out of favour along with the Roman Empire, the Arabs continued cultivating artichokes and brought them to Spain. There it was named alcachofa from the Arabic al-karsufa and the name was later borrowed by the Italians who called it articiocco. 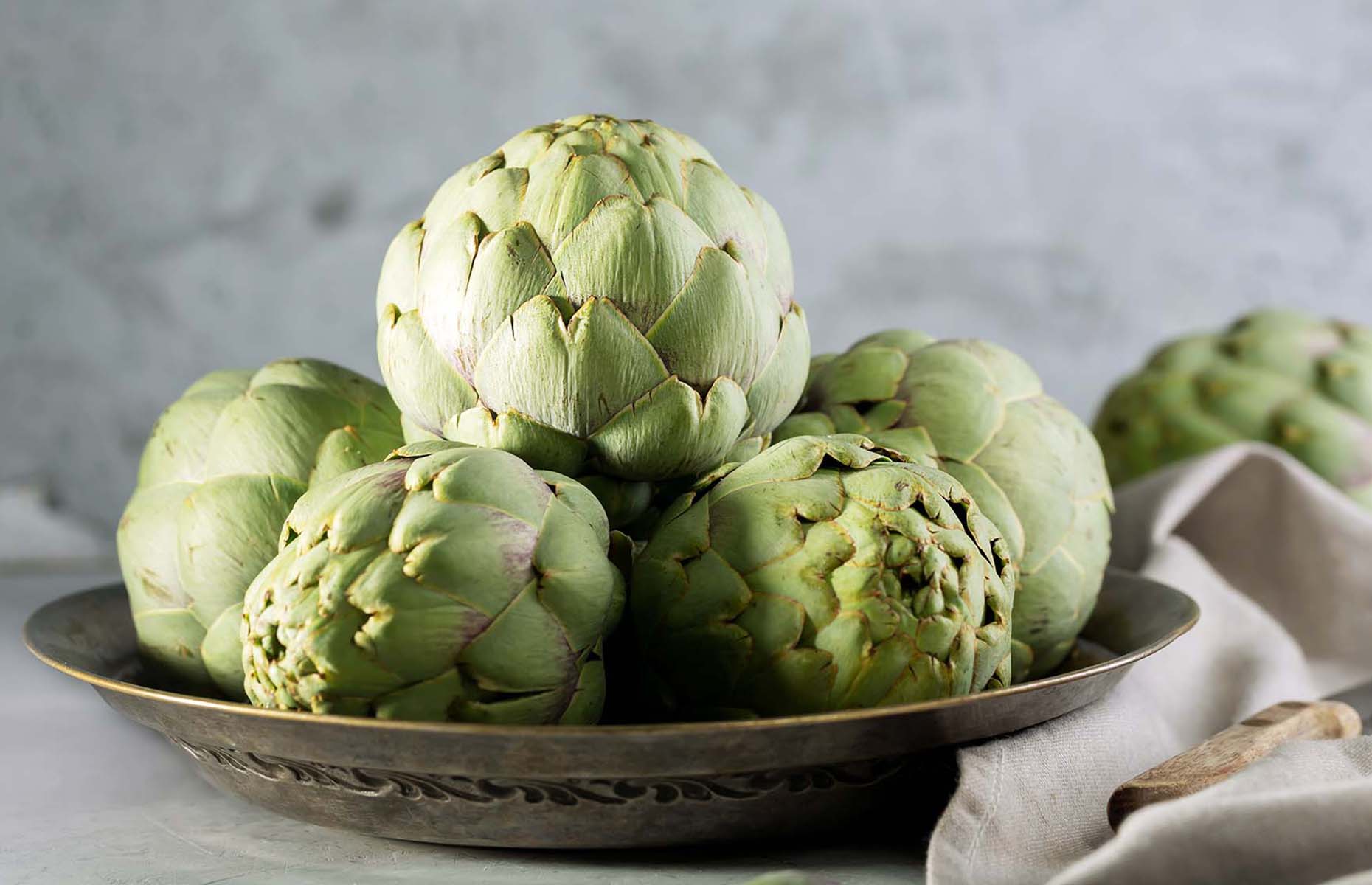 From Italy, artichokes are believed to have spread thanks to Catherine de Medici, who arrived in France from Florence ready to marry in the 16th century with artichokes in tow. From there, they reached Holland and England, where the artichoke got its English name and was said to be a favourite of Henry VIII. In the US, globe artichokes arrived in the 1800s along with European immigrants.

A common feature on restaurant menus today, chefs love artichokes as they're beautiful to look at and delicious to eat. "I love the theatre they bring to a plate," Henry Freestone, Head Chef at Peckham Cellars says. "There's no better sight than seeing the excitement of someone peeling off the petals one by one."

Often regarded as the ‘true’ artichoke, globes are easily recognised by their rounded shape. Available all year round, but at their best from June through to November, globe artichokes can be green or purple. When choosing an artichoke, Henry says to look for firm, big artichokes and make sure the skin looks nice and tight. It should also be relatively heavy for its size – a sign that it still holds a lot of moisture and hasn’t dried out – and squeak a little when squeezed. "Have a feel of the vegetable, it should be plump and crisp, the leaves should be tightly closed and the stem should look crisp and not dishevelled," chef and author Nitisha Patel says. "A great fact to remember is that globe artichokes are actually flowers that have not yet opened so think of bright green flower buds which haven't bloomed." They’re best stored in an airtight container in the fridge where they’ll last for about a week.

A globe artichoke plant normally produces artichokes in a range of sizes, including around a dozen baby artichokes. These grow on the lower part of the stem and are shaded from the sun, hence are much smaller. 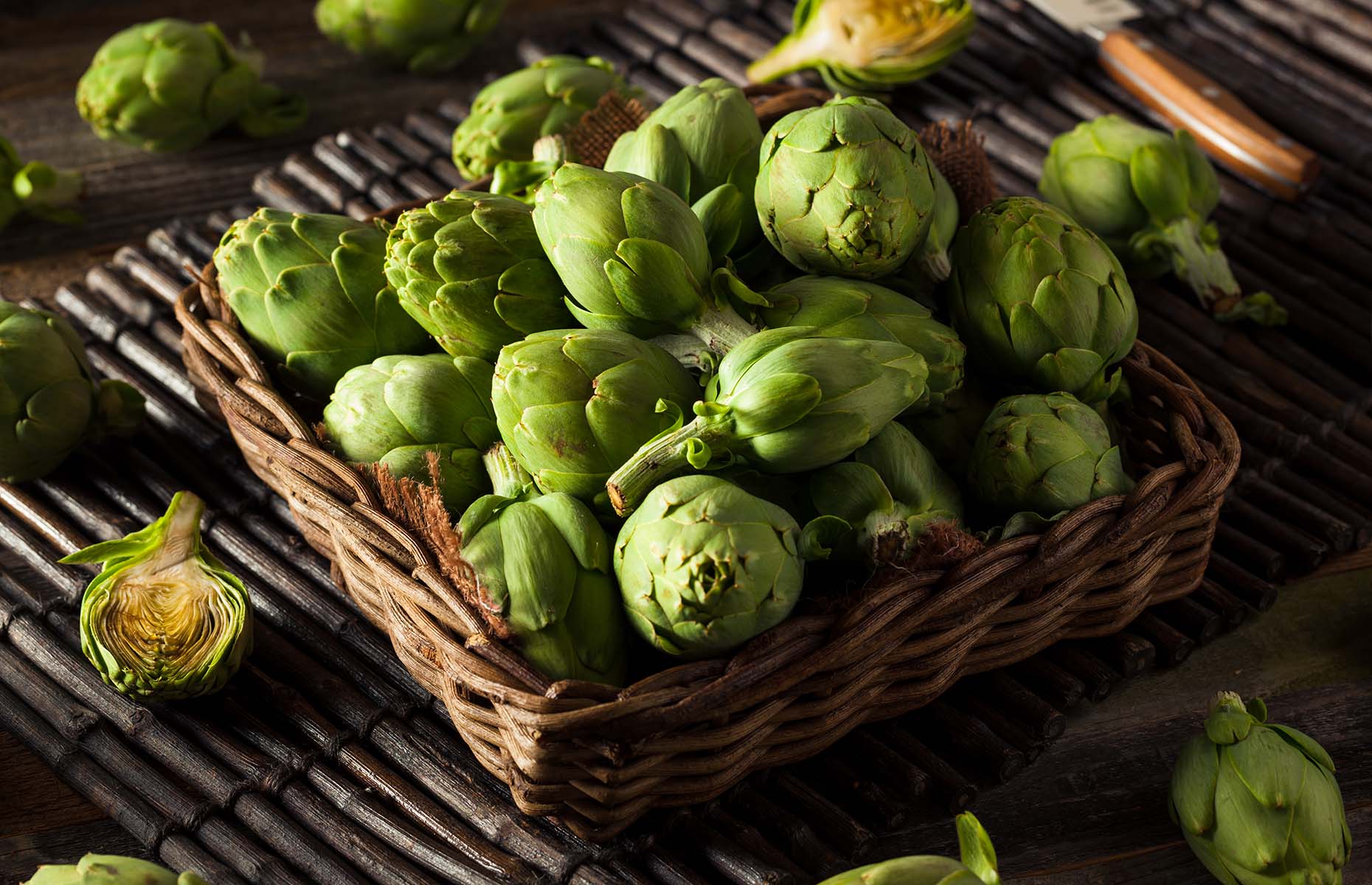 Tapered and longer in appearance, elongated varieties include spiny artichoke and Violetto – an Italian heirloom artichoke known for its tenderness. The preparation and cooking are the same as for globe artichokes.

Not really an artichoke at all, Jerusalem artichokes (also known as sunchokes) are native to Central America and visually often resemble a ginger root. The brown-skinned tuber is prepared and cooked similarly to potatoes or parsnips. A winter vegetable, it’s characterised by a slightly sweet and nutty flavour and is best roasted, sautéed in stews or puréed into a soup.

Anatomy of an artichoke

As an artichoke is technically a flower, its layers consist of petals – thick green (or purple) outer floral leaves that are stringy, fibrous and shouldn’t be eaten and pale-yellow inner ones, which are edible. At the centre of an artichoke is the choke, a cluster of tightly woven fibres, that resemble hair and isn’t edible. Finally, underneath the choke is the heart and the stem – the meatiest and tastiest parts of an artichoke. These are the two parts used in jarred and tinned shop-bought products and can be chargrilled in oil, marinated or preserved in water or brine. 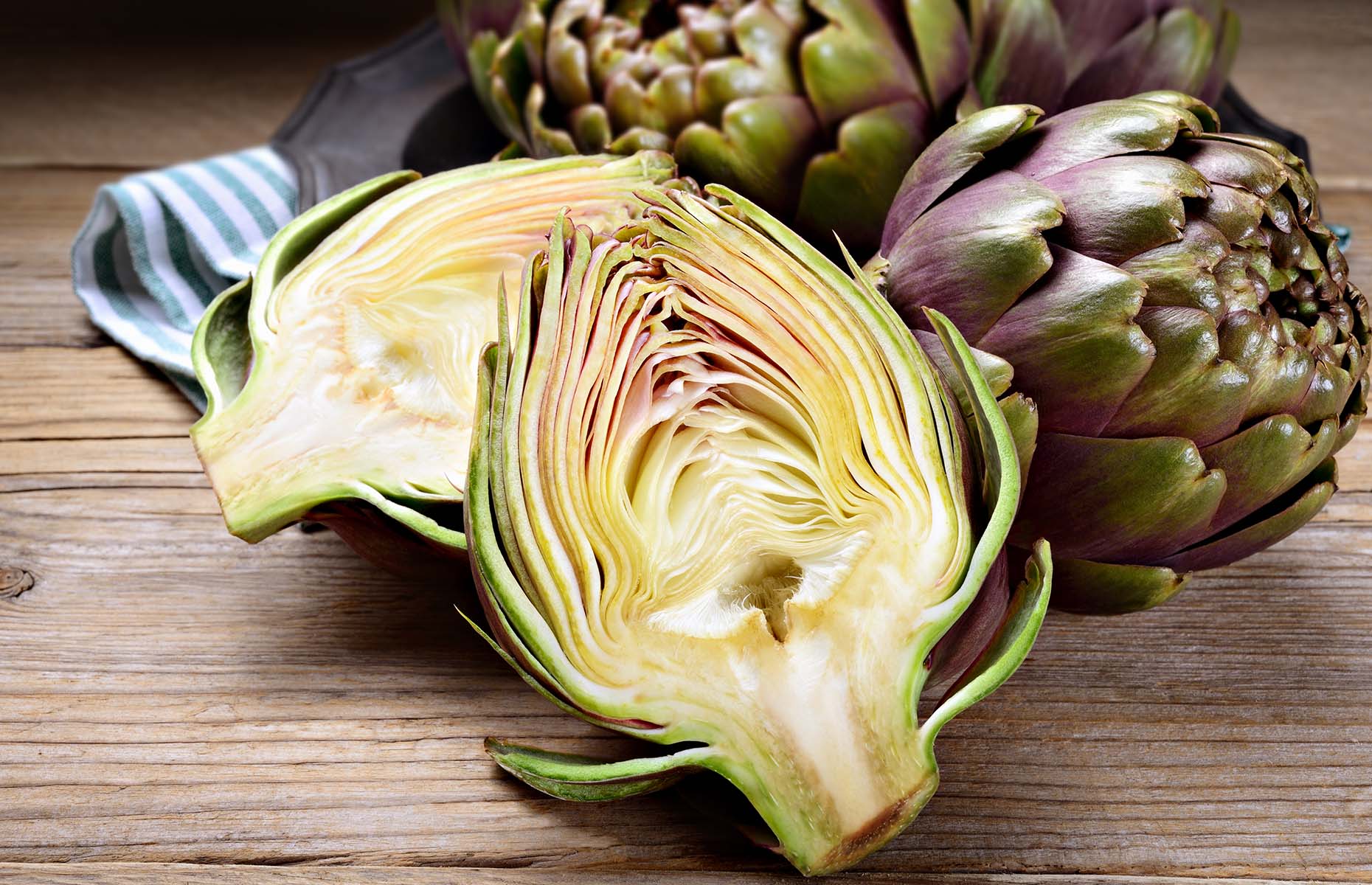 How to prep artichokes

At a glance, artichokes might seem like a lot of work, but with a little know-how, they’re easily prepared and cooked to be served as antipasti or incorporated into a variety of dishes. Nitisha agrees that artichokes do look a little intimidating on the outside, but suggests having "a little patience, practice and persistence" and having a go anyway.

How to prepare whole artichokes

If using the artichoke whole, start by giving it a rinse and slice off the top quarter and stem with a knife, then use scissors to snip off the thorns at the end of each petal. Henry reminds to pull back and snap off the tough outer leaves until you get to the paler, yellow ones. This is a common way to prep them before boiling or steaming.

The choke often remains soft and edible in baby artichokes and most of the leaves can be eaten whole too so all that needs doing is trimming the artichoke to get rid of the spikey top and peeling off any of the outer petals to reach the pale, inner ones as well as the stem. If you’d rather get rid of the choke, slice the artichoke in half lengthways and scoop out the small choke. 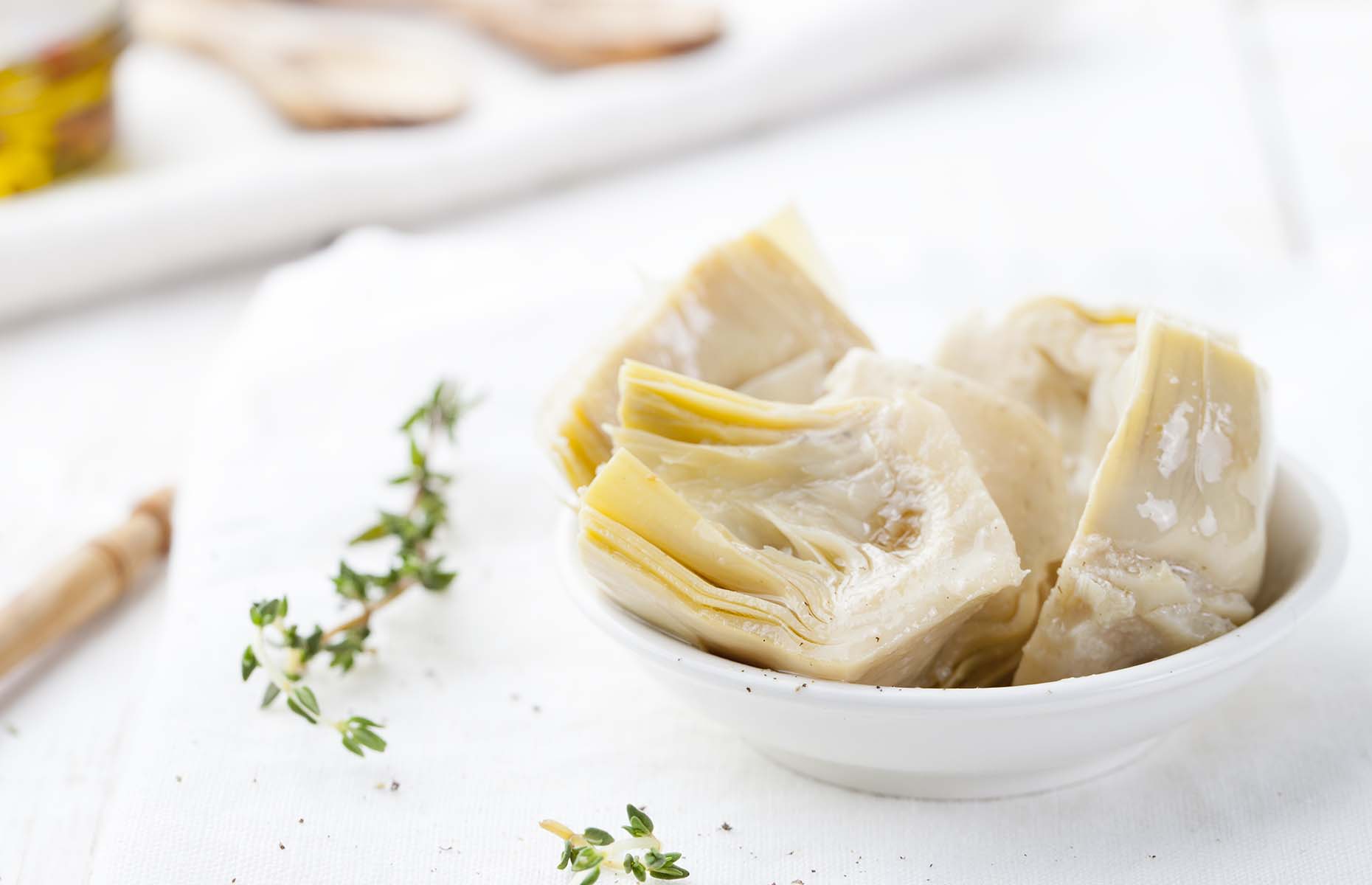 How to prepare artichoke hearts

To get straight to the best part of the artichoke, remove all the petals, slice in half lengthways and scoop out the choke and peel the stem until it looks light green – you’ll be left with just the edible part of the artichoke that’s ready to be cooked and eaten. Both Henry and Nitisha suggest rubbing the cut surfaces of the artichoke with lemon juice to prevent browning. You can place prepped artichokes in a bowl of lemon ice water until ready to cook.

How to cook artichokes

"When you have an ingredient as great and wholesome as globe artichokes, it's best to celebrate it by keeping things simple and allowing it to speak for itself," Nitisha says. Boiling and steaming are both common ways to cook and serve the artichoke whole as finger food. Henry likes boiling his artichokes in a herby stock and serve with butter. When eating, pluck off a petal, dip it in sauce and bite down with the meaty side pointing down. Then simply pull it out, scraping the tasty flesh out with your teeth.

Boiling an artichoke is quicker as it’ll only take around half an hour, but it can make the flesh too watery and dilute the flavour. Steaming can take as much as an hour, but you can infuse the flesh with flavour by adding lemon slices, garlic and herbs to the cooking water. 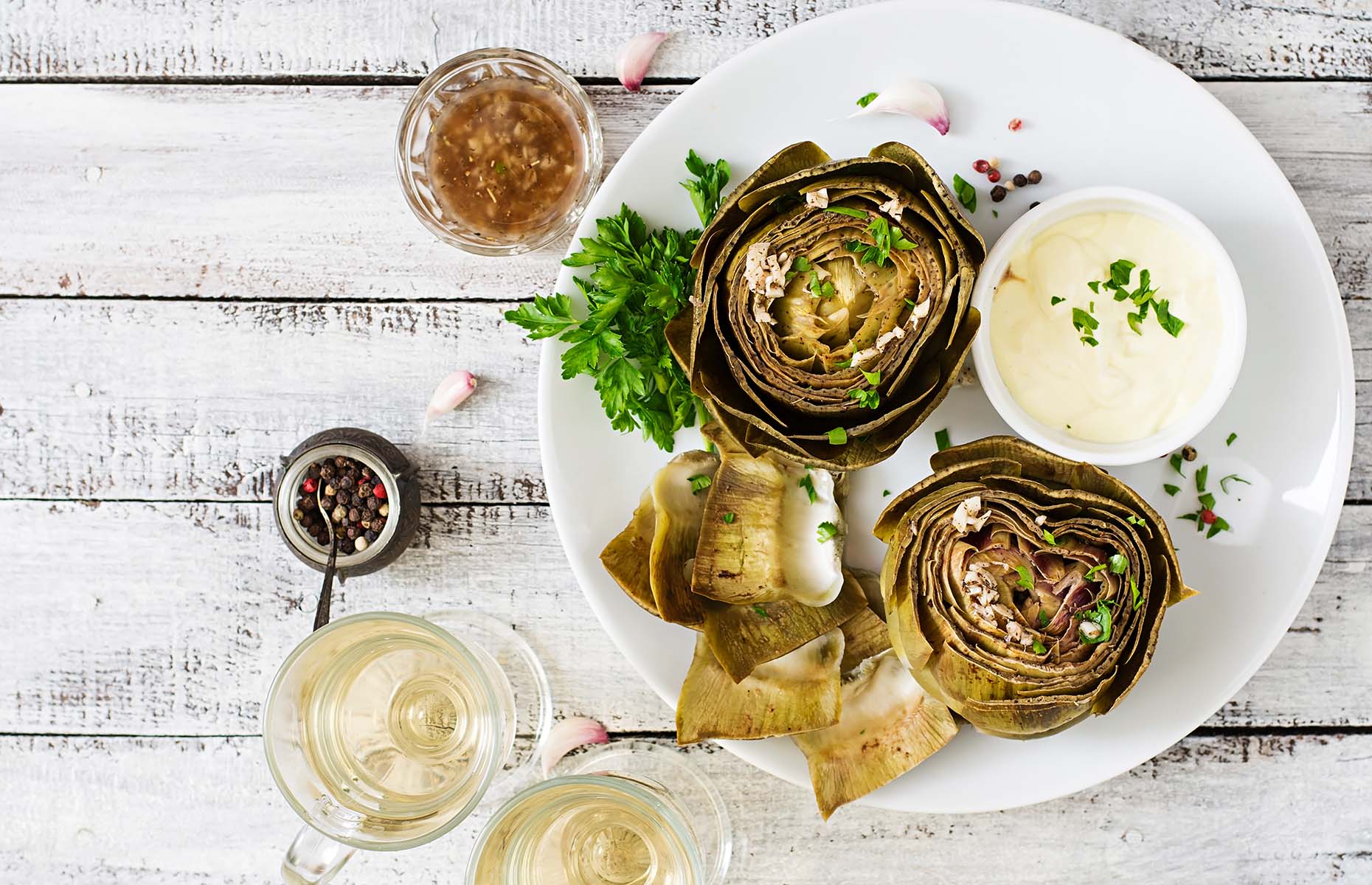 Artichokes can be roasted like any other vegetable – coat in oil and roast cut side down for around half an hour. This is an easy way to cook them as there’s no need to parboil or steam ahead of time. You might have to cover them in tin foil to prevent the loss of moisture.

Baking is similar to roasting, but the artichoke is usually parboiled or pre-steamed and then stuffed with cheese, breadcrumbs, herbs and garlic. Once stuffed, they can take as much as an hour and a half to cook.

A popular way to cook halved artichokes, grilling is great for achieving that charred flavour. Artichokes have to be boiled or steamed to soften the flesh, then sprayed with oil before grilling for up to seven minutes. You could grill it for half an hour without pre-cooking it, but this risks the artichoke drying out. Nitisha takes her boiled artichoke one step further by slicing it into quarters and tossing in olive oil, lemon juice and salt and pepper before slightly charring in a hot griddle pan. 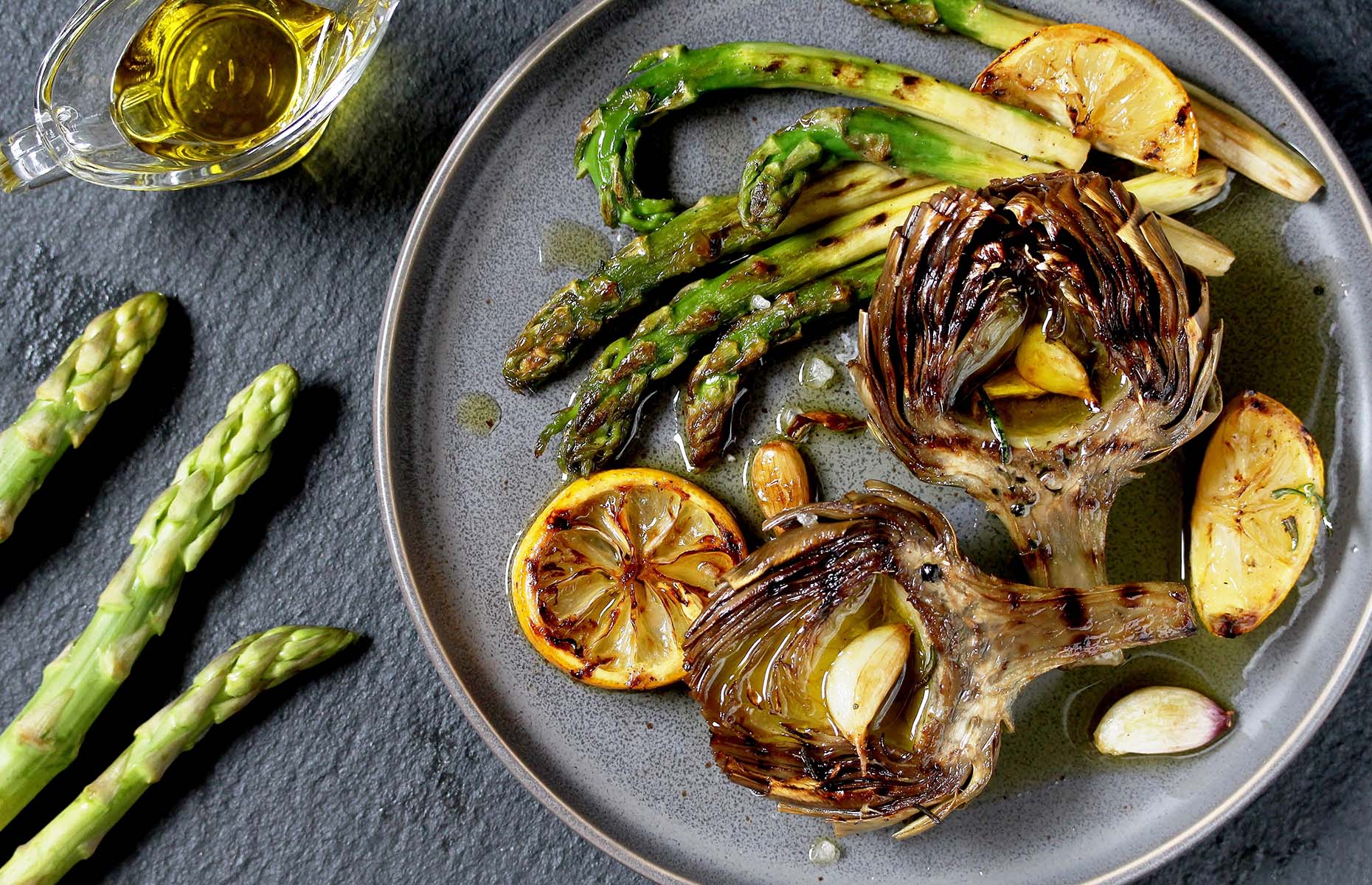 The easiest way to familiarise yourself with artichokes and start using them in your cooking is to get your hands on the jarred chargrilled stuff in oil or tinned hearts in water or brine. The latter is especially good if you’re not that confident about preparing one from scratch but would like to try cooking it yourself.

A simple vegetable tart with onions and mushrooms will welcome the addition of chargrilled artichokes and you can also use them as a pizza topping or toss in a risotto or pasta. The jarred artichokes are great to put on crostini with ricotta, serve as a part of an antipasto platter or sauté in brown butter with capers to spoon over baked white fish. 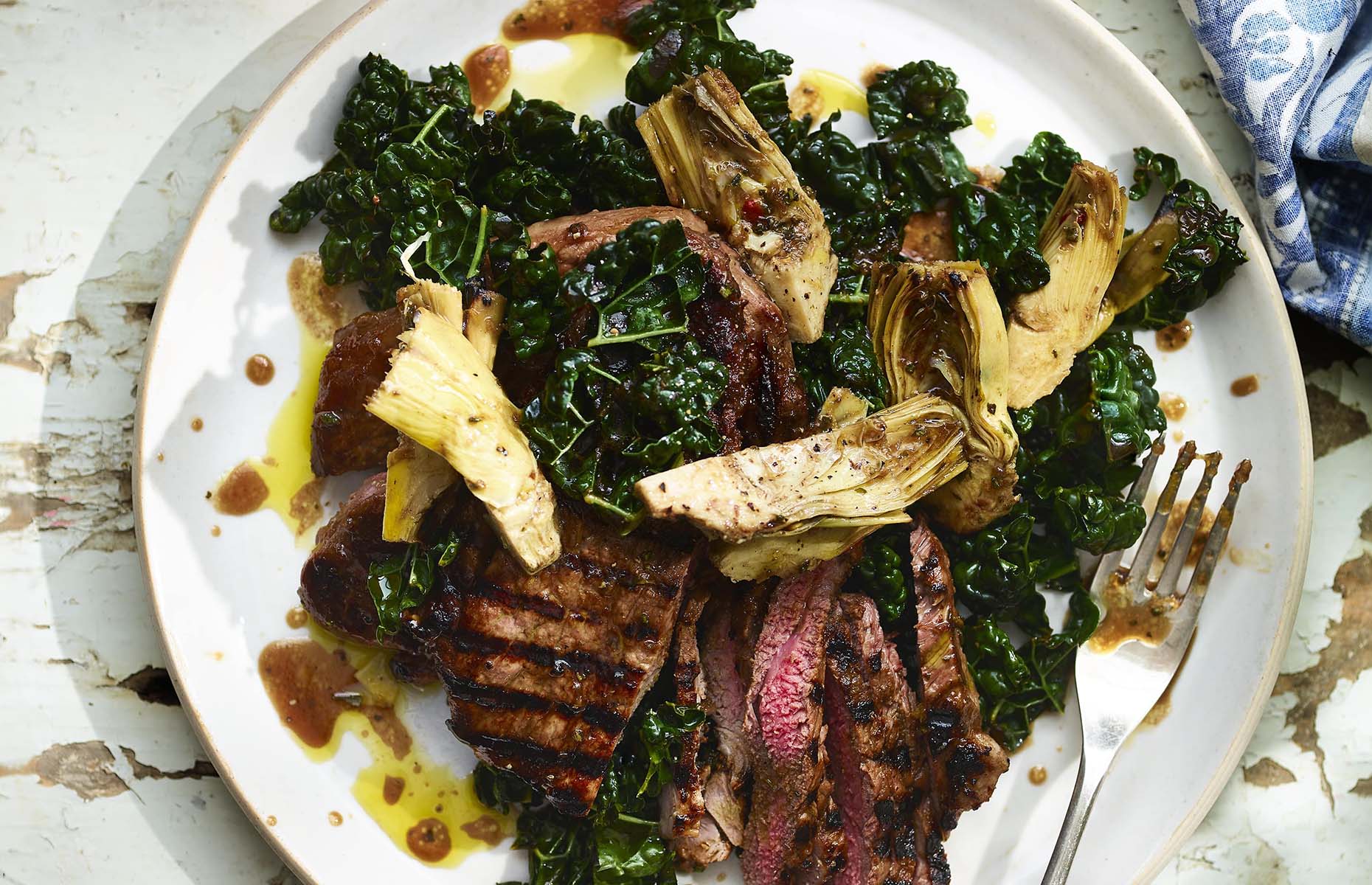 The delicate flavour of artichokes complements Mediterranean-style meat recipes, like this Sardinian lamb with cabbage, perfectly. This recipe incorporates prepped artichoke hearts from a jar that you can also use to make hot artichoke dip, especially popular in the US. Simply chop up the artichoke hearts from the tin, mix with crushed garlic, mayonnaise and fresh, grated Parmesan cheese and bake until golden. This is great served with tortilla chips, breadsticks, chunks of bread or even vegetable sticks to dip in.

When you’re ready to prep and cook whole artichokes yourself, try this Italian recipe of stuffed artichokes, known as carciofi ripieni, or use them to make this moreish socca – a crispy chickpea flour crêpe from Nice. Artichoke hearts can also be eaten raw – prep like you normally would, then thinly slice to add to salads like this take on a salade Niçoise.