A complete guide to kefir

Like other fermented foods such as kimchi and kombucha, interest in kefir has risen sharply in recent years. Its gained status as a health food that’s beneficial for gut bacteria, which in turn is credited with improving physical and mental wellbeing. We explore what is kefir and what’s so special about it.

Kefir is a white to cream-coloured milk drink with a slightly fizzy, viscous consistency; a distinct sour smell; and a tart, creamy taste similar to liquid yogurt or buttermilk. It’s made from grains that are formed by both bacteria and yeast existing together in their own ecosystem known as scoby (symbiotic culture of bacteria and yeast).

Most commercial kefirs are made from cows’ milk, but goat, ewe, sheep or buffalo milk can be substituted. Whole, pasteurised milk is the most common, but traditionally raw milk was used. 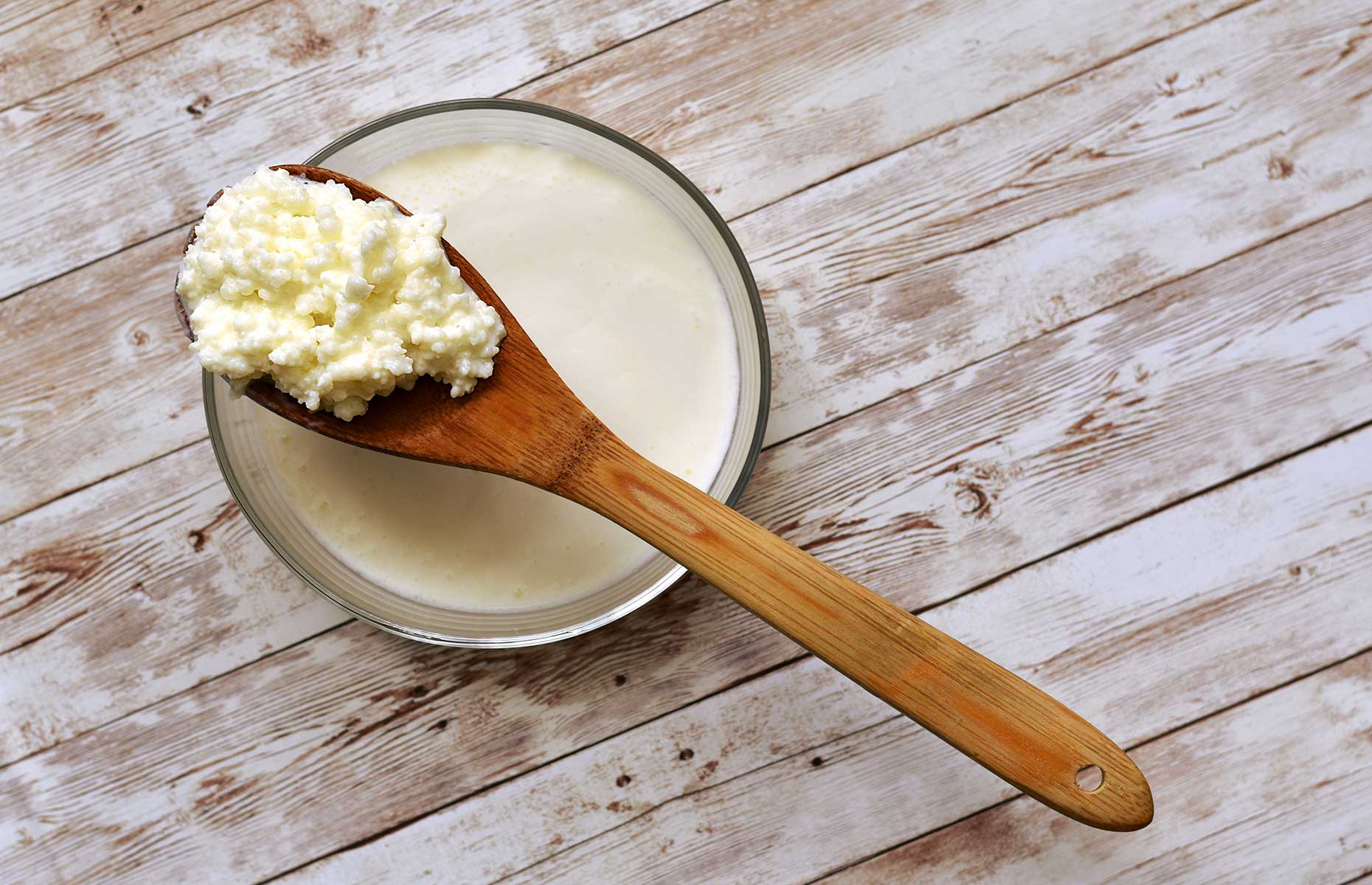 Kefir is most commonly consumed as a refreshing drink (plain or flavoured) and is also available in the forms of yogurt and soft cheese.

British-Polish food writer Ren Behan, author of Wild Honey and Rye: Modern Polish Recipes, says: “I’m a big fan of kefir. My grandmother used to drink it (it was one of her favourite drinks) and so it makes me giggle that it’s become a trend food. It forms a large part of the dairy offering in Polish cuisine, particularly as we enjoy sharp and sour tastes.”

What are kefir grains?

Kefir grains are small gel-like beads that are white to pale yellow in colour, and have the appearance of tiny cauliflower florets. Fermentation gives the drink a negligible alcohol content. 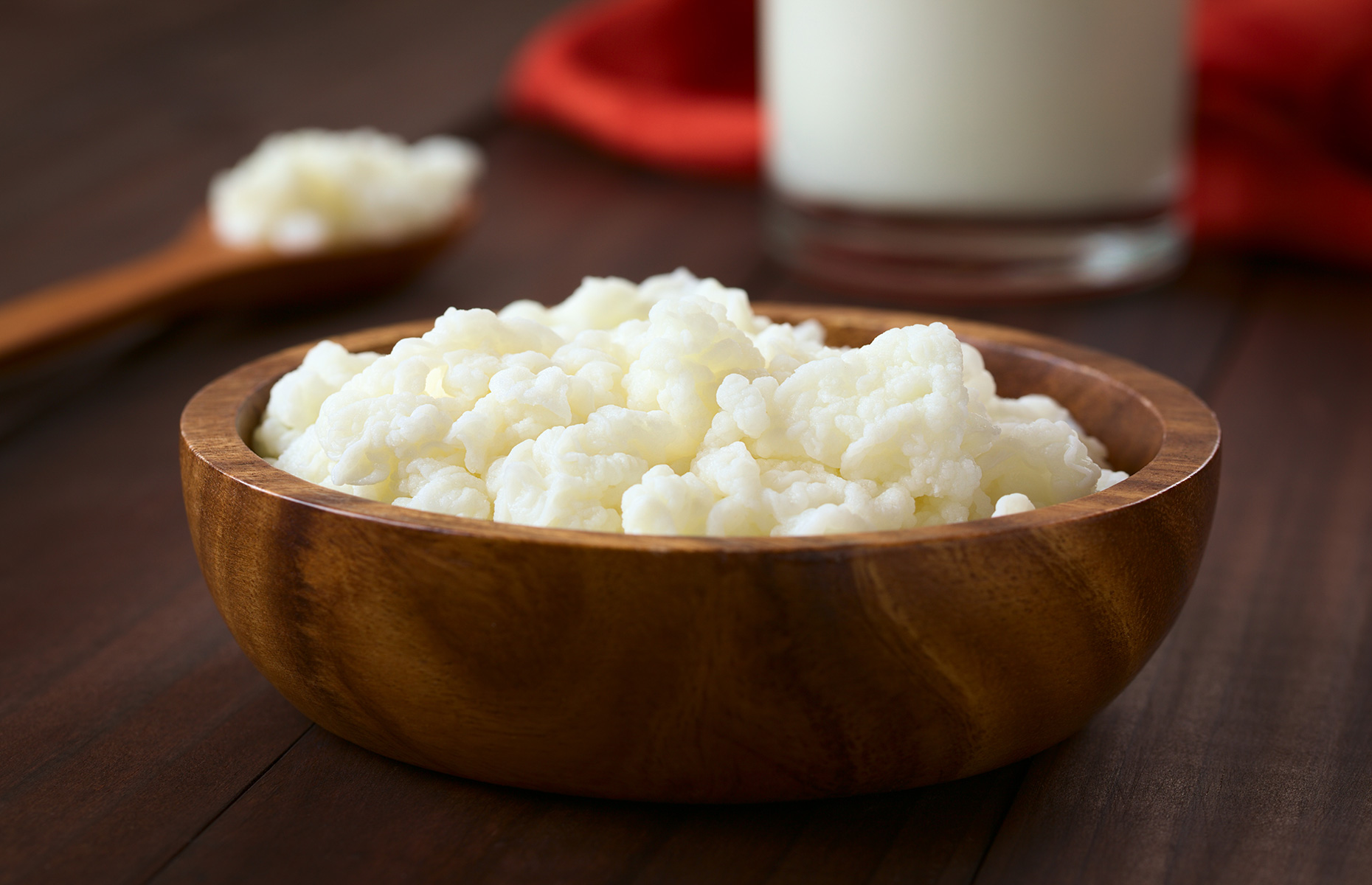 The general term ‘kefir’ always refers to milk kefir, but there’s also kefir made from sweetened water specifically known as water kefir. Plus there are plant-based alternatives created from coconut water, coconut milk, fruit juices, ginger beer, or nut milks such as soya, rice and almond.

Kefir is believed to have originated in the northern region of the Caucasus Mountains in Eastern Europe, at the intersection of Asia and Europe. According to the Merriam-Webster dictionary, usage of the word kefir dates back to 1884 – but in fact its origins go back even further. The word may come from Old Turkic for milk froth or foam; or possibly Kurdish and Persian words for foam or bubbles. Other possibilities are the Kurdish word kef, which means wellbeing or bliss; or the Turkish word keyif, meaning feeling good. 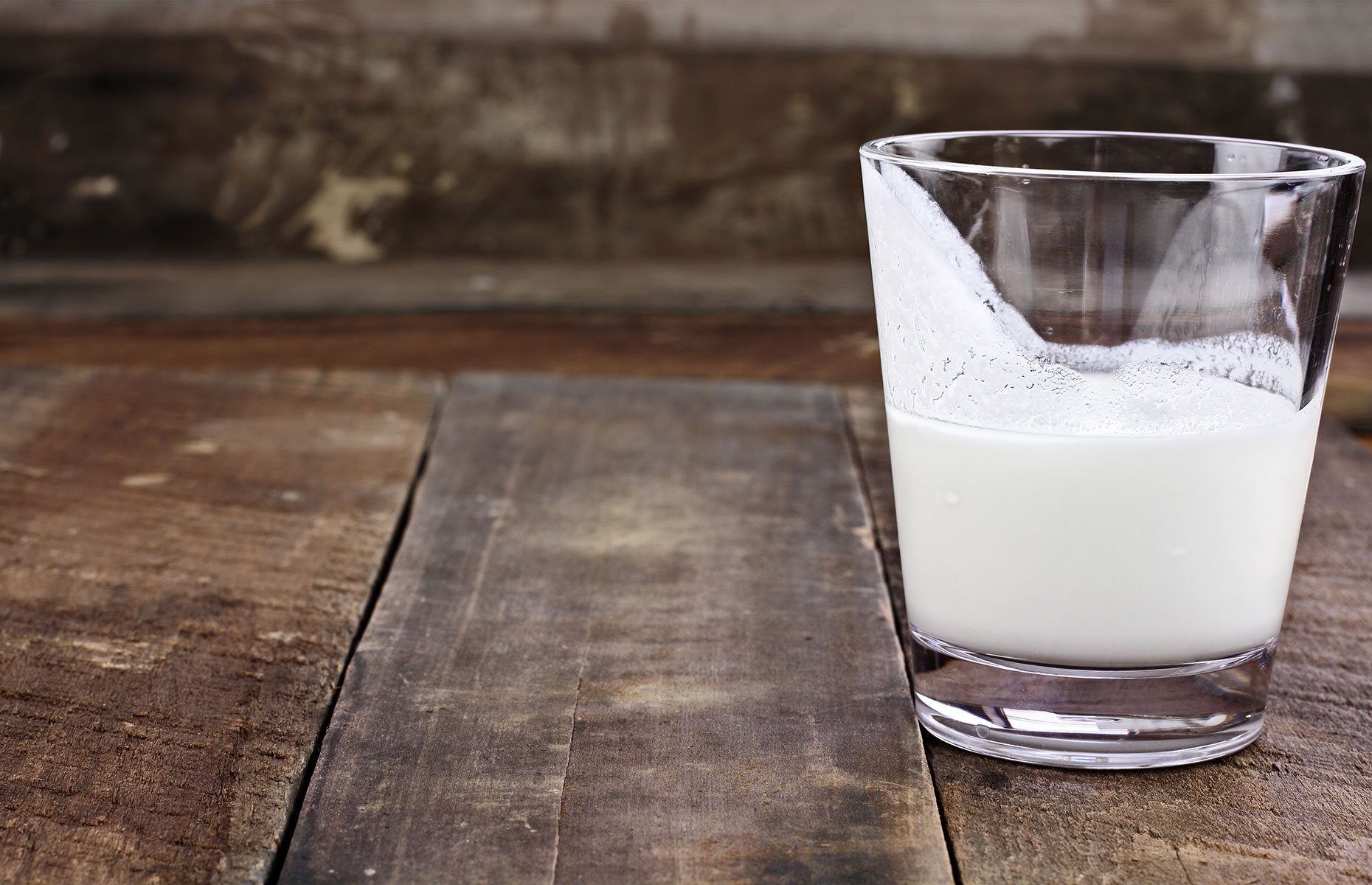 Similar to other cultured dairy products such as yogurt and cheese, kefir is believed to have been accidentally created when kefir grains and milk were left in leather bags, resulting in fermentation. But where the grains came from in the first place is not known.

According to one legend, Prophet Muhammad gifted them to his followers, on the condition that they did not share them with non-believers – otherwise they would lose their medicinal healing powers. Hence, they were nurtured and guarded by Muslim tribes in the region for generations and remained a well-kept secret for thousands of years.

READ MORE: What is miso and how to cook with it

A more plausible story – later officially acknowledged by the Russian government – tells how kefir grains were brought to Russia, and from there they travelled to Europe, Japan and the USA.

At the start of the 20th century, the All-Russian Physicians Society asked the Blandov brothers, who owned cheese-making factories in Northern Caucasus, to help obtain kefir grains. There followed a lot of drama involving the attempted abduction and rescue of one of their beautiful employees, Irina Timofeevna Sakharova (pictured below), which eventually resulted in her bringing bottles of kefir to sell in Moscow in 1908. 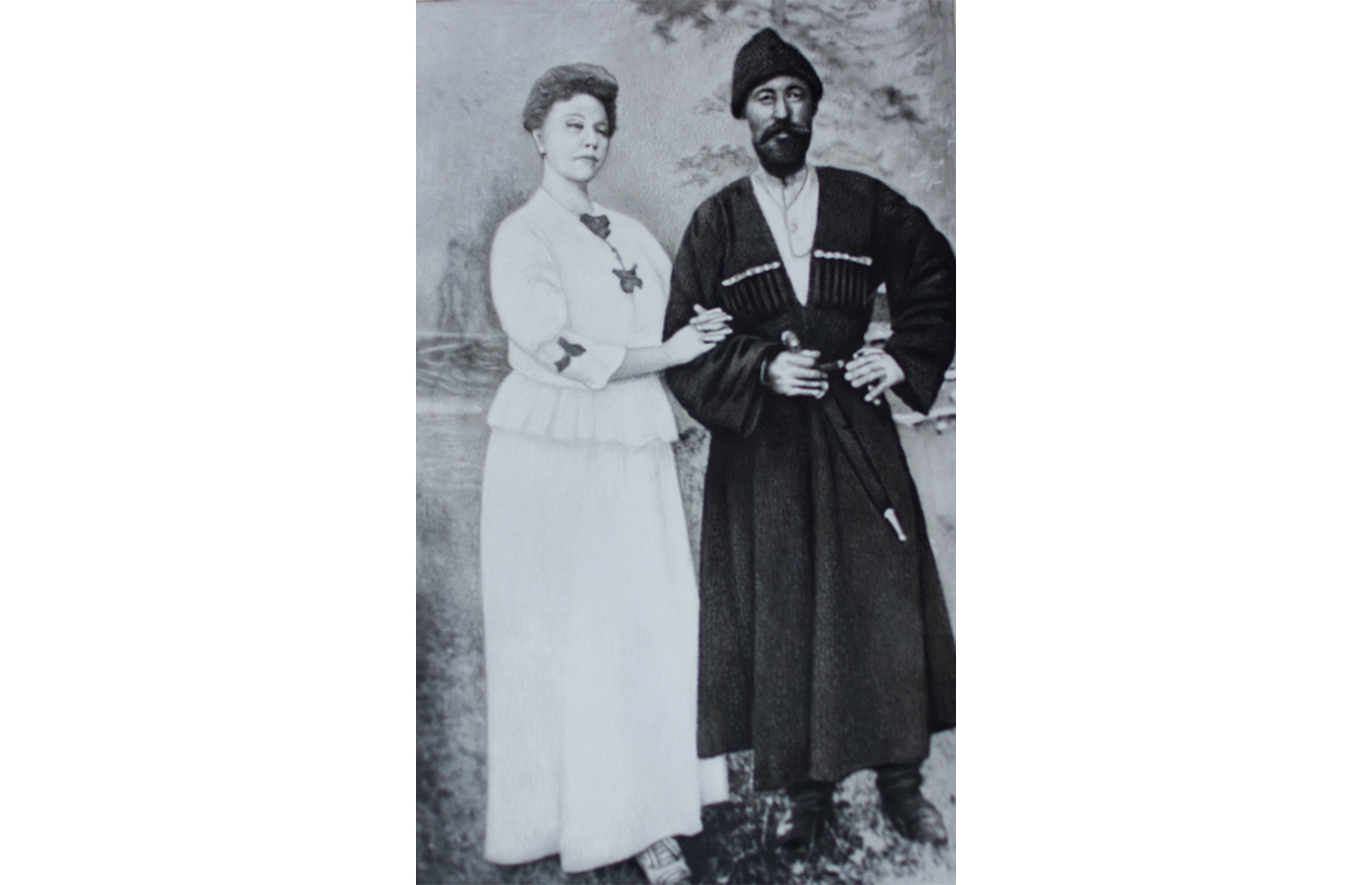 Is kefir good for you?

So, what exactly is so special about kefir? It’s been credited with health-giving properties and longevity for centuries. In some Eastern European countries, it’s the first weaning food given to babies. Behan adds: “Kefir is thought to help the metabolism, lower cholesterol and can even cure a hangover.”

Kefir is packed with vitamins, minerals and essential amino acids, and is a more potent probiotic than yogurt. Like yogurt, it’s believed to help improve digestion and reduce digestive problems. It’s also said to boost the immune system and has strong anti-bacterial properties. 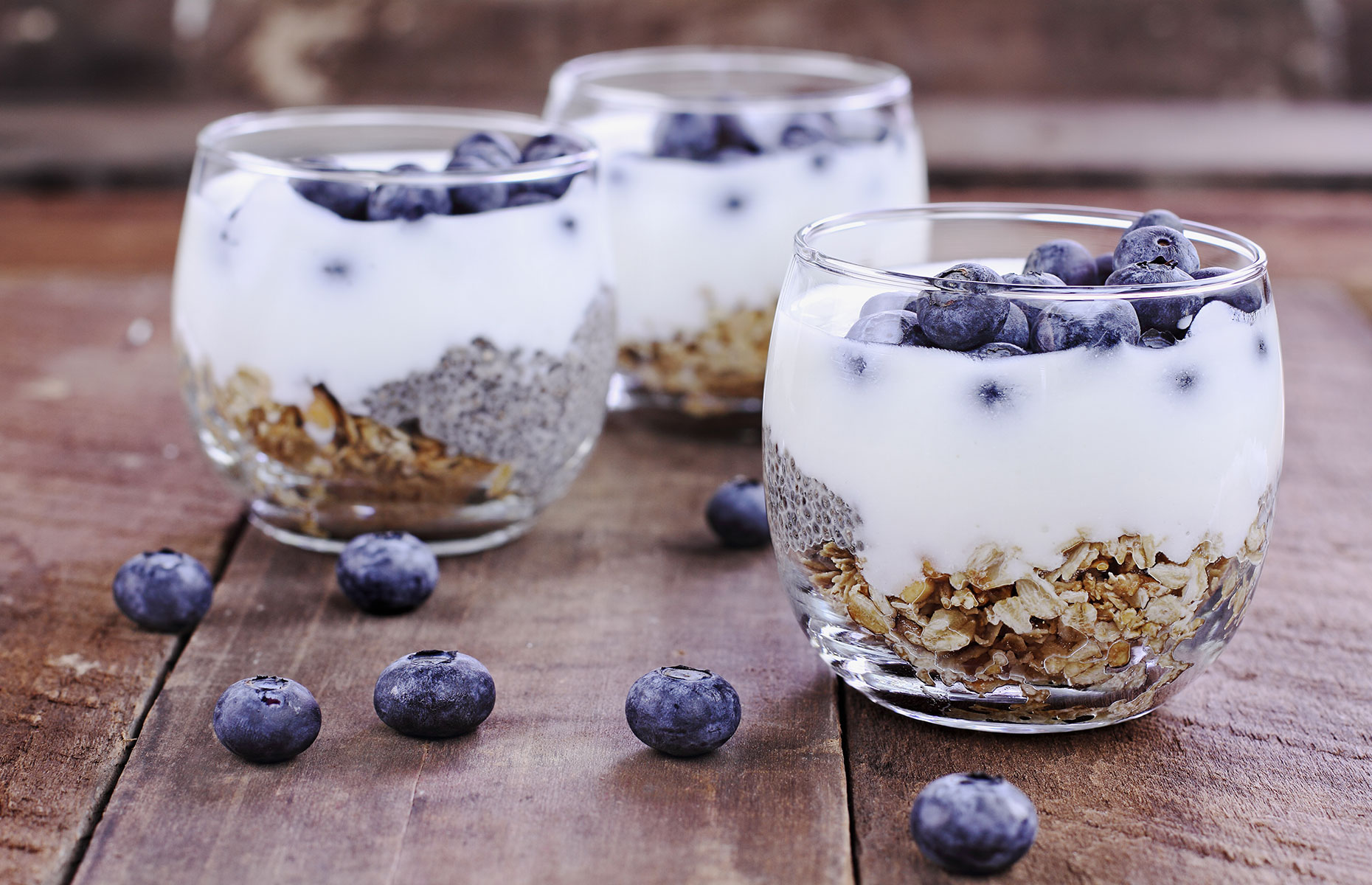 An important source of calcium, it also enhances bone health and minimises the risk of osteoporosis. Plus, despite being a milk-based drink, kefir is low in lactose because of the way it’s fermented, and it can often be tolerated by the lactose intolerant (but do seek medical advice first).

How to make kefir

It’s relatively simple to make kefir at home. Russian food writer and private chef Katrina Kollegaeva of Rosehip + Rye confirms: “I have made kefir before at home, it's not that difficult, honestly! I used Darra Goldstein's recipe from her original book on Russian food, A Taste of Russia.”

To make kefir, add about a teaspoon of kefir grains (see the Where to buy kefir section about how to purchase grains) per one cup of whole cows’ milk. Pour in a glass jar, cover with a lid, and place in a cool, dark place to ferment for between 12 to 36 hours. The exact amount of time will depend on how warm your kitchen is.

Leave a couple of inches of space at the top of the jar, otherwise gas may build up causing it to explode. Do not use metal containers, as the acidity in the milk may react against it; and use small batches of milk at a time, in case it goes off during the fermentation process. 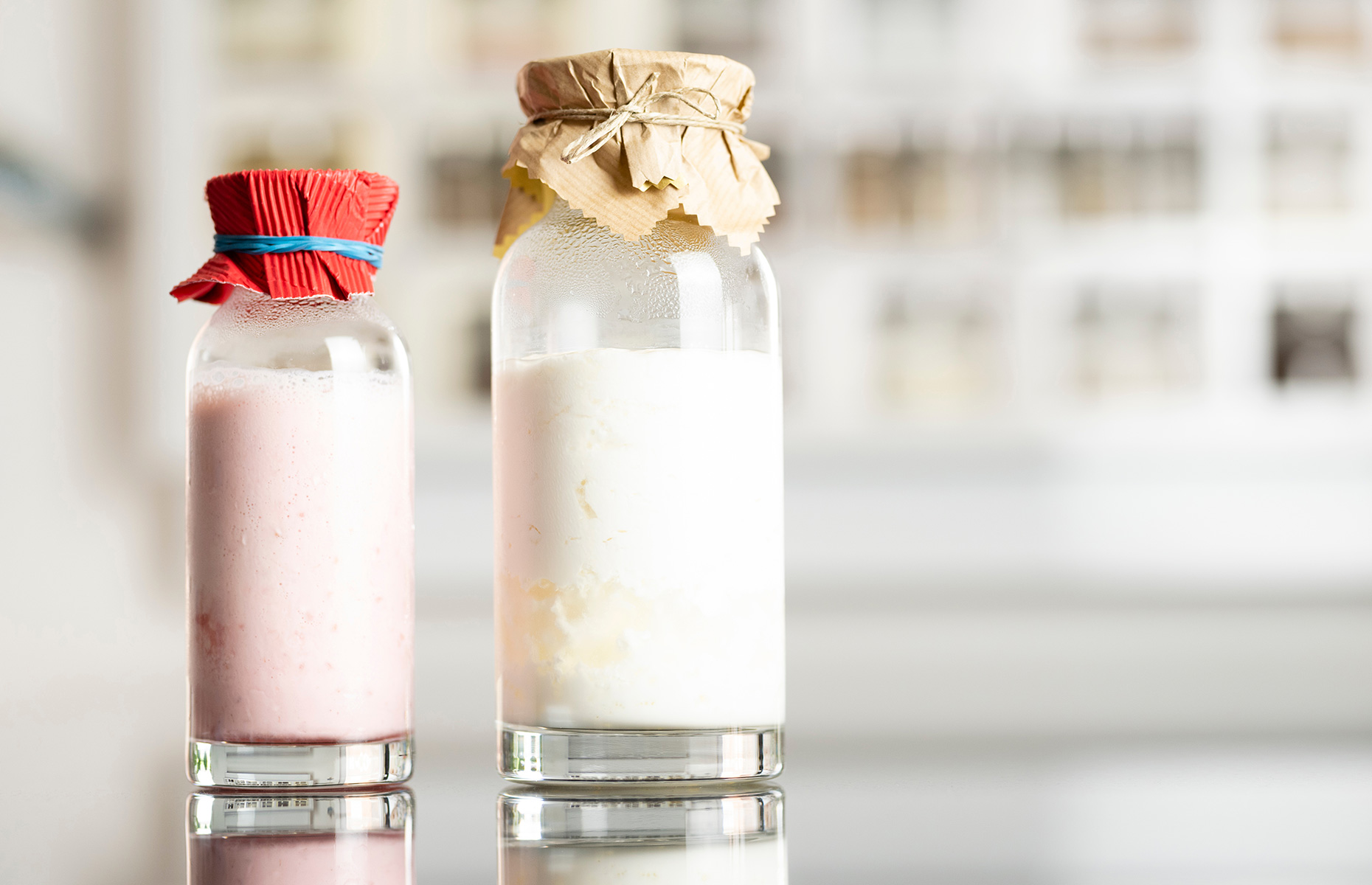 Do not stir or disturb the mixture, but check it regularly – if the milk has thickened, the kefir is ready. If it’s too thick, dilute with a little milk.

Filter out the grains and use them to immediately make the next batch. Don’t leave them in the kefir, otherwise they’ll damage the active bacteria. If not using straightaway, wash the grains in cold tap water and leave to dry on a piece of paper or cloth for a couple of days, then store in a dry place. 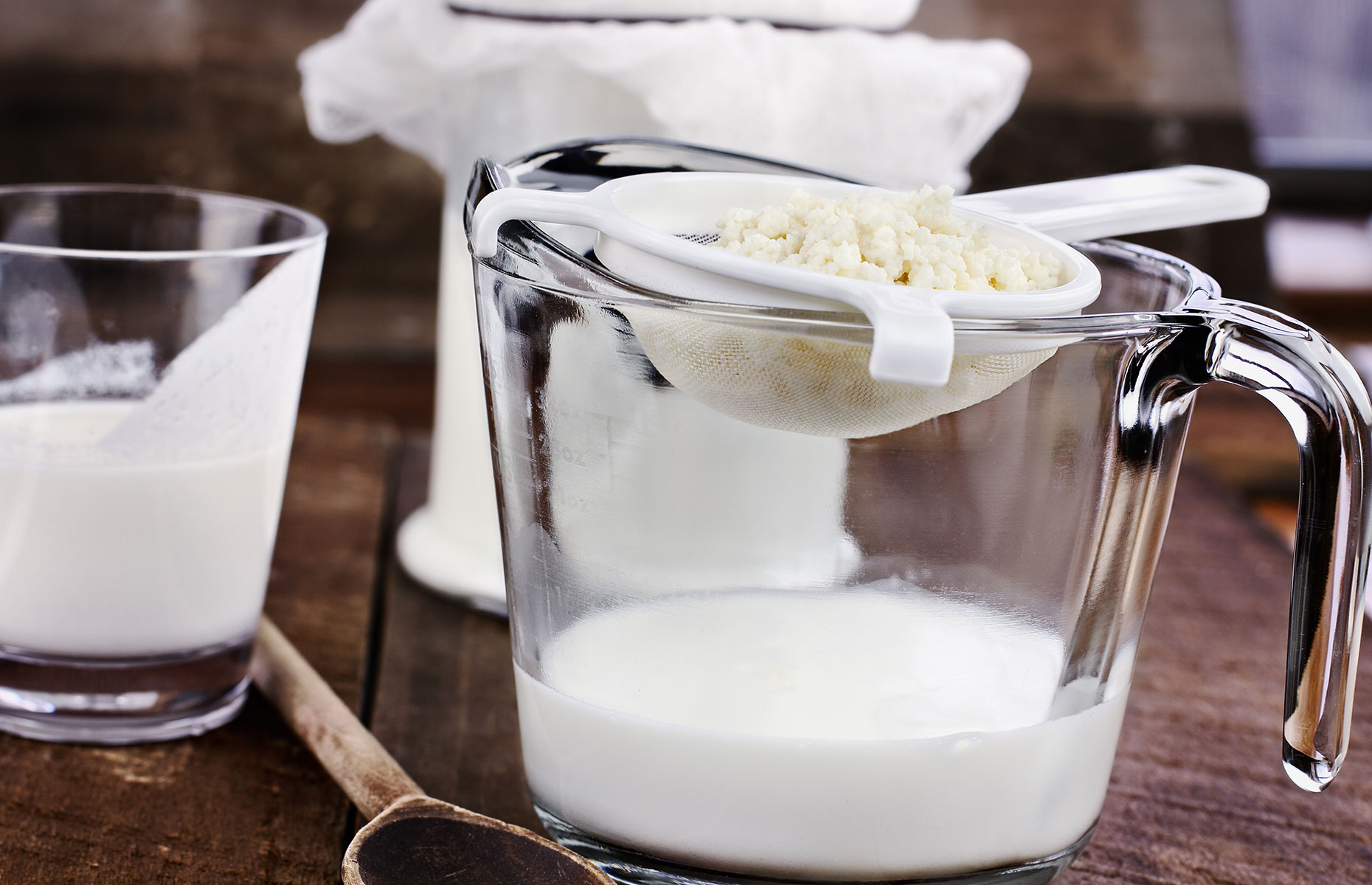 The grains can also be frozen or freeze-dried. If they work sluggishly and future kefir-making takes too long, revive them in some milk for a few hours to reactivate them.

Commercial kefirs are often made using the ‘Russian method’ of double fermentation – after removing the grains, the kefir is topped up with more milk and left to ferment further for 12 to 18 hours.

Where to buy kefir

Where to buy kefir grains

In the UK, you can buy kefir grains online from popular sites like Happy Kombucha and Freshly Fermented. Making kefir using grains is an artisanal method more suited to producing small batches. And in fact, many commercial kefirs are manufactured from freeze-dried, lab-made starter cultures that come in a powder form.

Kefir made from grains requires several steps, and each increases the risk of contamination. Using cultures means fewer processes and more control and predictability at each stage, leading to a more consistent quality. Cultures are also easier to transport and increase the shelf life of kefir by about 10 to 15 days.

Although the end result is similar, kefir made from grains tastes superior to that made from cultures.

READ MORE: Everything you need to know about tofu

Where to buy ready-made kefir produced from grains

Kollegaeva adds: “Most often I buy Biotiful kefir. I think it’s the most delicious and authentic. [Founder] Natasha Bowes was the pioneer of kefir making several years ago. I’m so pleased to see 'nash' (literally 'our' – how we refer to anything from our culture, from the 'New East', former USSR countries) products becoming popular in this country!”

Behan, who says she has never made her own kefir, advises: “My top tip is to buy it in the Polish shop as it’s much cheaper than trendy options!”

While kefir is usually consumed as a drink, its tangy flavour and brilliant tenderising properties make it perfect for cooking.

Behan says, “It’s very common in Polish cooking. We use it in a cold beetroot soup called chłodnik litewski, also known as Lithuanian beetroot soup, which you can find in my book Wild Honey and Rye. It is also used in pancakes, cold desserts and cakes.” 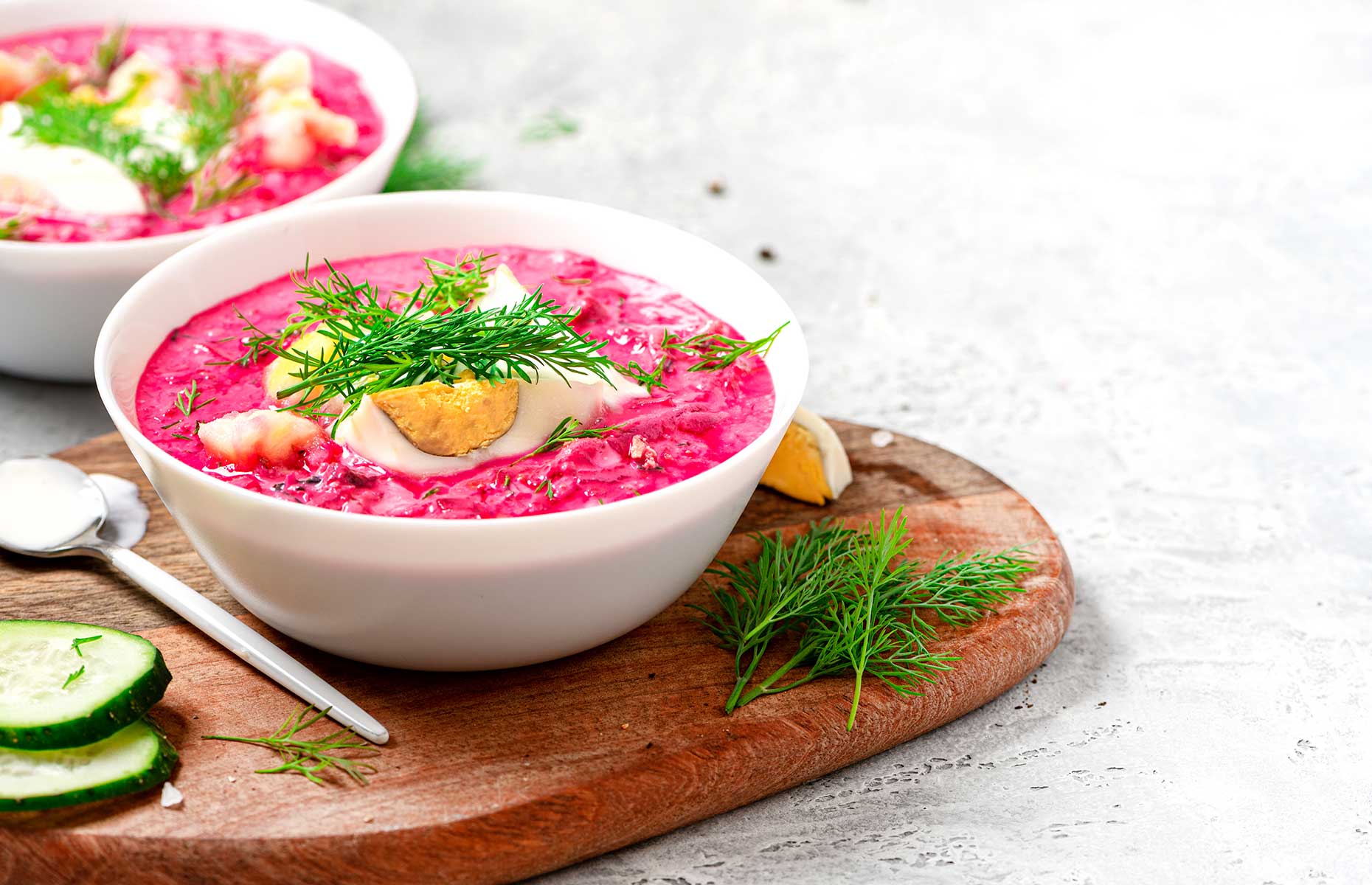 In Russian cooking, it’s also used for soups, as well as meat and to make fluffy pancakes. Kollegaeva says, “One of my favourite summer soups is okroshka. Think gazpacho but with kefir as a base. I mix in some puréed beetroot and mustard to create this tangy, naturally slightly sweet mixture. So delicious in a thermos for picnic!”

READ MORE: A guide to preparing and cooking with artichokes

She adds, “Kefir is also awesome for marinating meats, it tenderises it, allowing other flavours to get in better. I love this recipe from Olia Hercules for marinated chicken. But where I use kefir the most is oladushki. We make these fluffy pancakes with kefir and put a slice of apple on top. They’re called ‘s pripyokom' in Russian.”