A complete guide to kombucha

A much-hyped health drink, kombucha’s funky flavour can leave people with questions about its booze content, where it comes from and the round ‘mushroom’ floating on top when it brews. We’re here to explain how to pair kombucha with food, its health benefits and how to make your own at home

Kombucha is a non-alcoholic drink made from fermented tea. It often has a tart flavour with some sweetness and sometimes a light fizziness. It’s a little bit like non-alcoholic version of an apple cider and like a cider or vinegar, kombucha sometimes has sediment present in the bottle.

The unusual flavour of kombucha comes from fermentation. After making tea, the brewer adds sugar and something called a scoby. Once the tea has brewed (usually taking 5 to 15 days), you can strain or scoop out the kombucha. Flavours are added at a second fermentation stage. Ginger is popular, and sour fruit flavours like raspberry and passion fruit (like you might find in sour lambic beers) also pop up regularly. 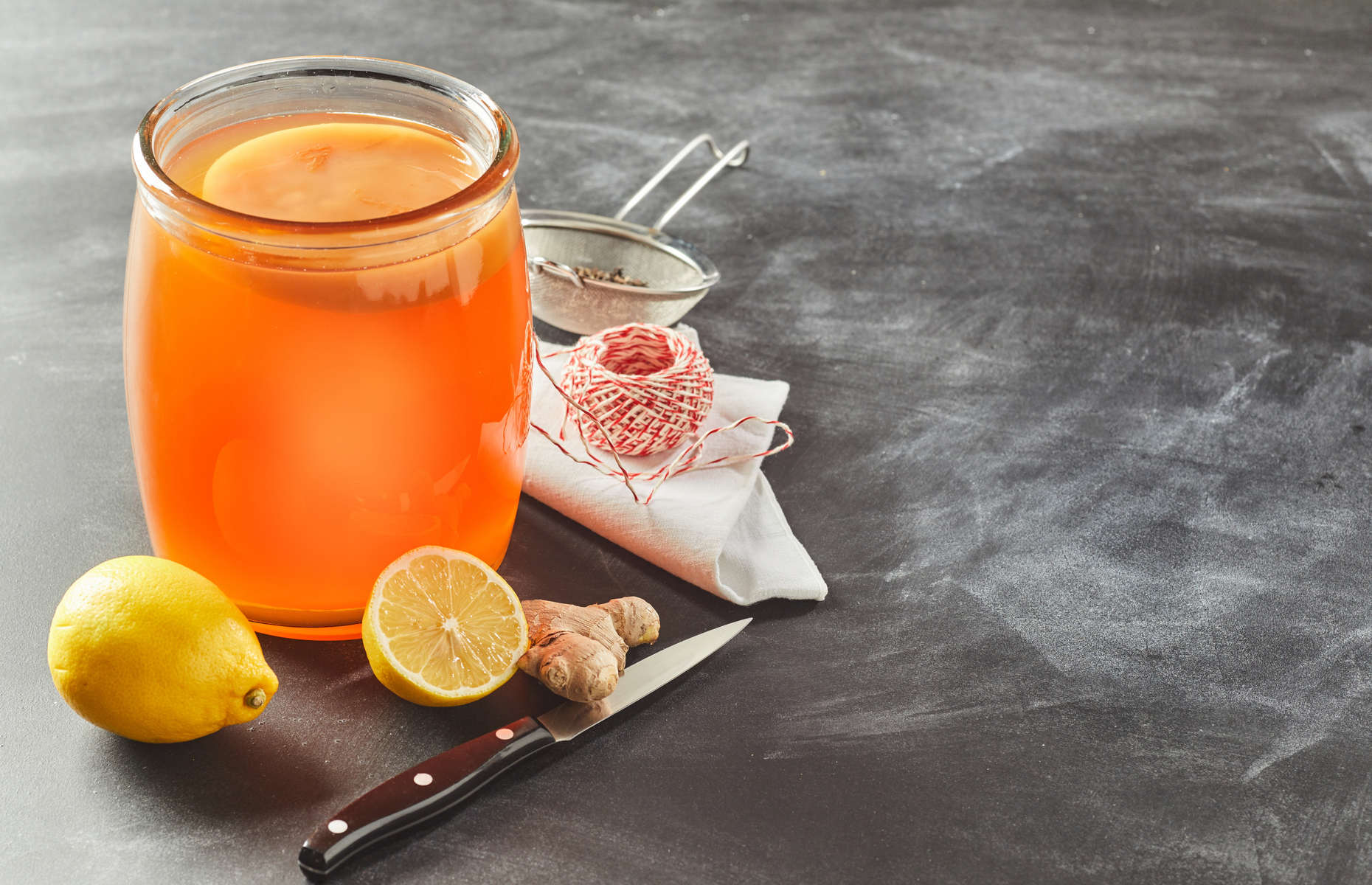 What is a scoby?

Scoby is an acronym for a ‘symbiotic culture of bacteria and yeast’ and is a soft, solid ingredient that starts the fermentation process in the tea. Yeast in the scoby ‘eats’ the sugar and produces a little bit of ethanol (alcohol). Then bacteria in the scoby eat the ethanol to produce an acid flavour (acetic acid, which also makes the sour flavour in vinegars, and gluconic). Between batches, the scoby is kept wet in a jar (ideally out of the fridge), ready for a new batch. 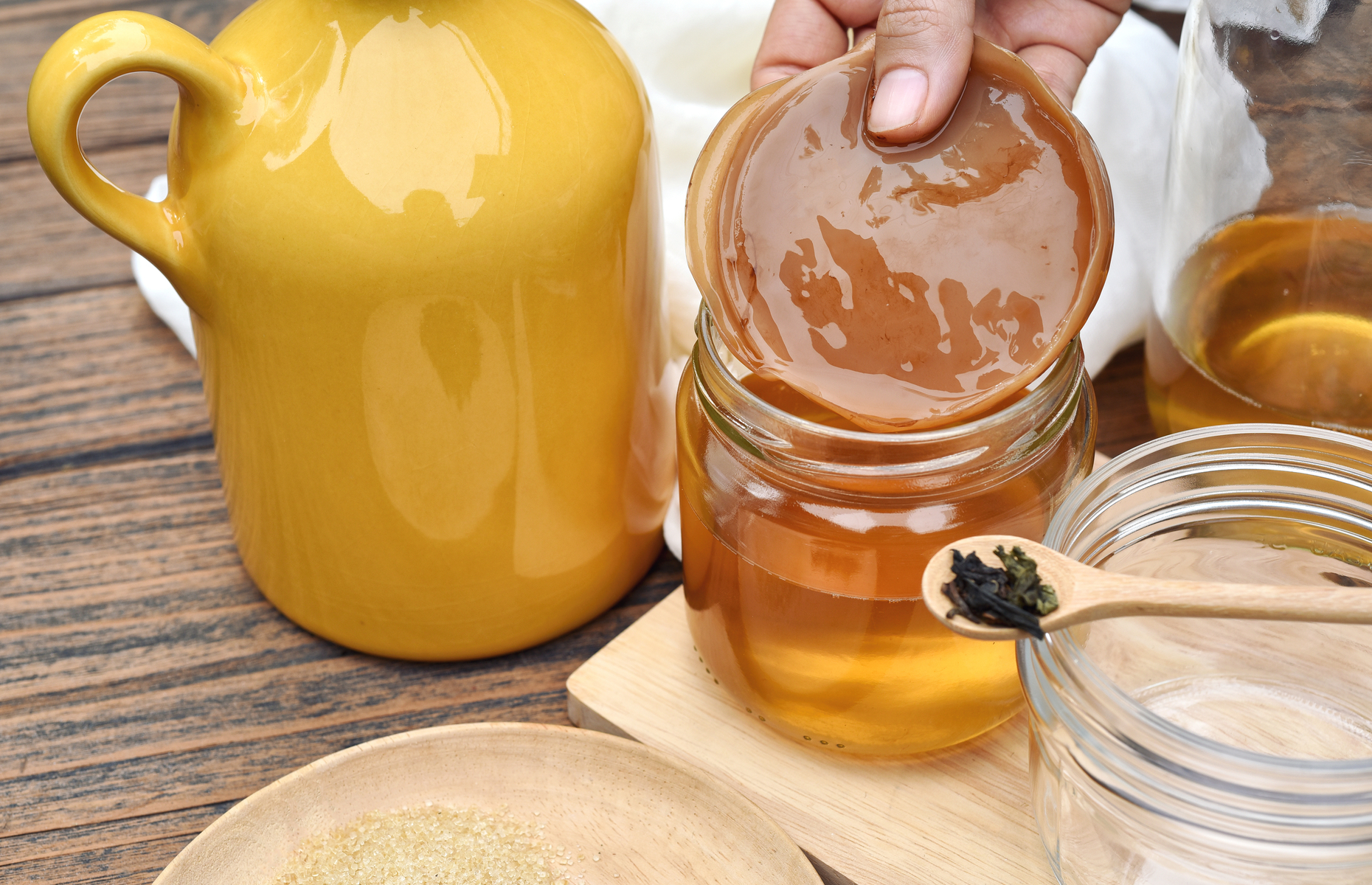 Where does kombucha come from?

Kombucha originally comes from China and was imported to Russia where it flourished as a homemade drink, particularly during the Soviet Union before American imports of soft drinks.

Pavel and Olga Syutkin, food historians and authors of CCCP Cook Book, say, “What has come to be called kombucha, 100 to 120 years ago in Russia had a special name: mushroom tea. It appeared in Russia at the beginning of the 20th century first in the Baltic regions, St. Petersburg and in the Volga region. Then it spread throughout the country.”

Darra Goldstein, author of cookbooks A Taste of Russia and Beyond the North Wind (out next year), says when she first visited the Soviet Union in the 1970s, many families kept a three-litre jar fermenting on their windowsills: “Some people drank it as a homegrown answer to the sweet, carbonated beverages of the West like Pepsi. Russian kombucha wasn’t – and still isn’t – as sweet as commercially-produced American versions. It’s sometimes flavoured with berries and herbs, such as blackcurrant, sea buckthorn and juniper.” 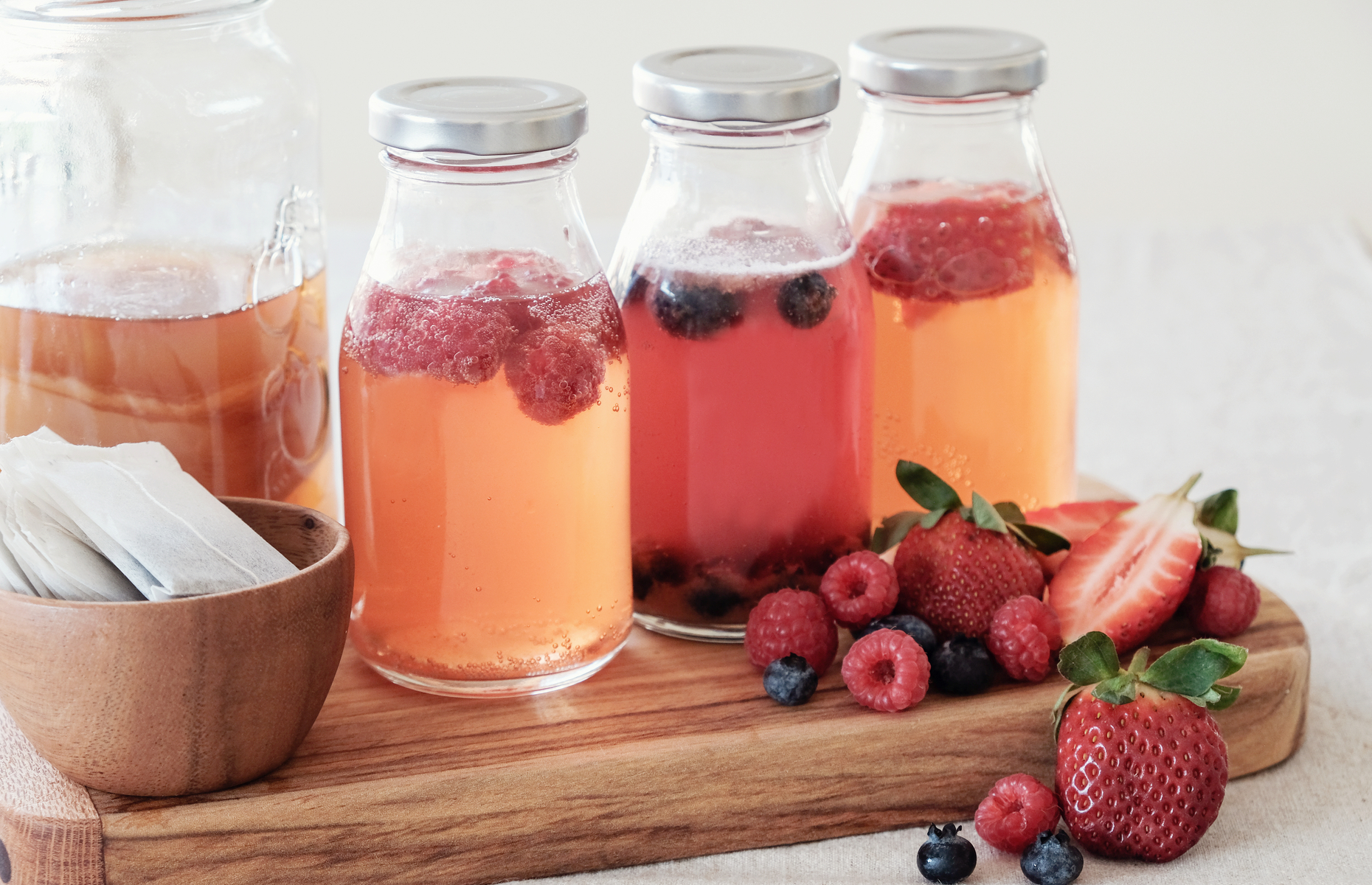 She continues, “After the collapse of the Soviet Union, people largely stopped making kombucha at home since commercial sodas were available. The irony is that kombucha became trendy again only in this century, riding on the wave of its ‘discovery’ as a superfood in the US.”

Kombucha-making made its way west in the early 2000s when it boomed in LA as part of a new macrobiotic food movement. The trend took off in the UK in 2010 but many people still associate it with Eastern Europe.

READ MORE: Everything you wanted to know about jackfruit

Adam Vanni, founder of London-based Jarr Kombucha, runs kombucha-making workshops alongside his production business and says that attendees sometimes share memories of drinking it at home in Poland or Russian: “They say, ‘I’ve been drinking this since I was two, my grandmother used to give it to me every morning. She used to brew it under her sink because she didn't want us to see how weird it looked.’”

What are the health benefits of kombucha?

Somewhat overstated, kombucha’s probiotic qualities are still in question. There's never been a peer-reviewed study on the effects of kombucha taken as a whole compound so it’s not really possible to make verified claims.

A lot of makers now tend to ignore that side of the debate and focus on the fact that kombucha is a delicious, fat-free, non-alcoholic drink. Unfortunately, it will always contain sugars (without which there would be no fermentation) but only as much as you’d find in fruit juice or tonic water. 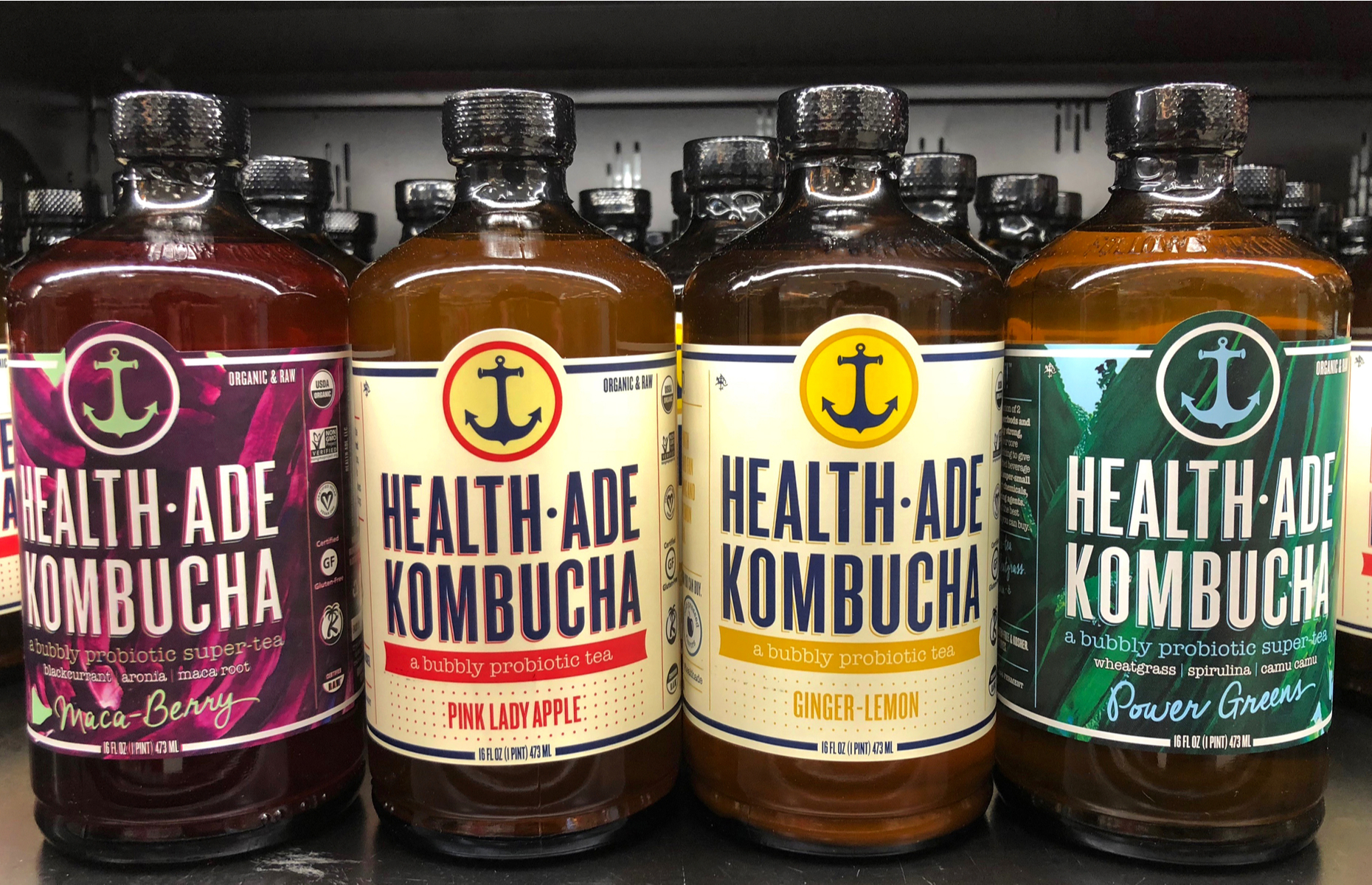 Claims are also made for the antioxidants and acetic acid found in kombucha, but we’re not yet convinced whether a sugary drink can be said to help balance blood sugar levels or re-up your antioxidant levels (whatever that means). The jury’s out.

On its own, kombucha is a very low-alcohol product but because it is fermented, it contains a small amount of naturally occurring alcohol. That said, brands like Bootleg Booch are now producing alcoholic (or ‘hard’) kombucha, with percentages ranging around 3-5%, similar levels to beer. 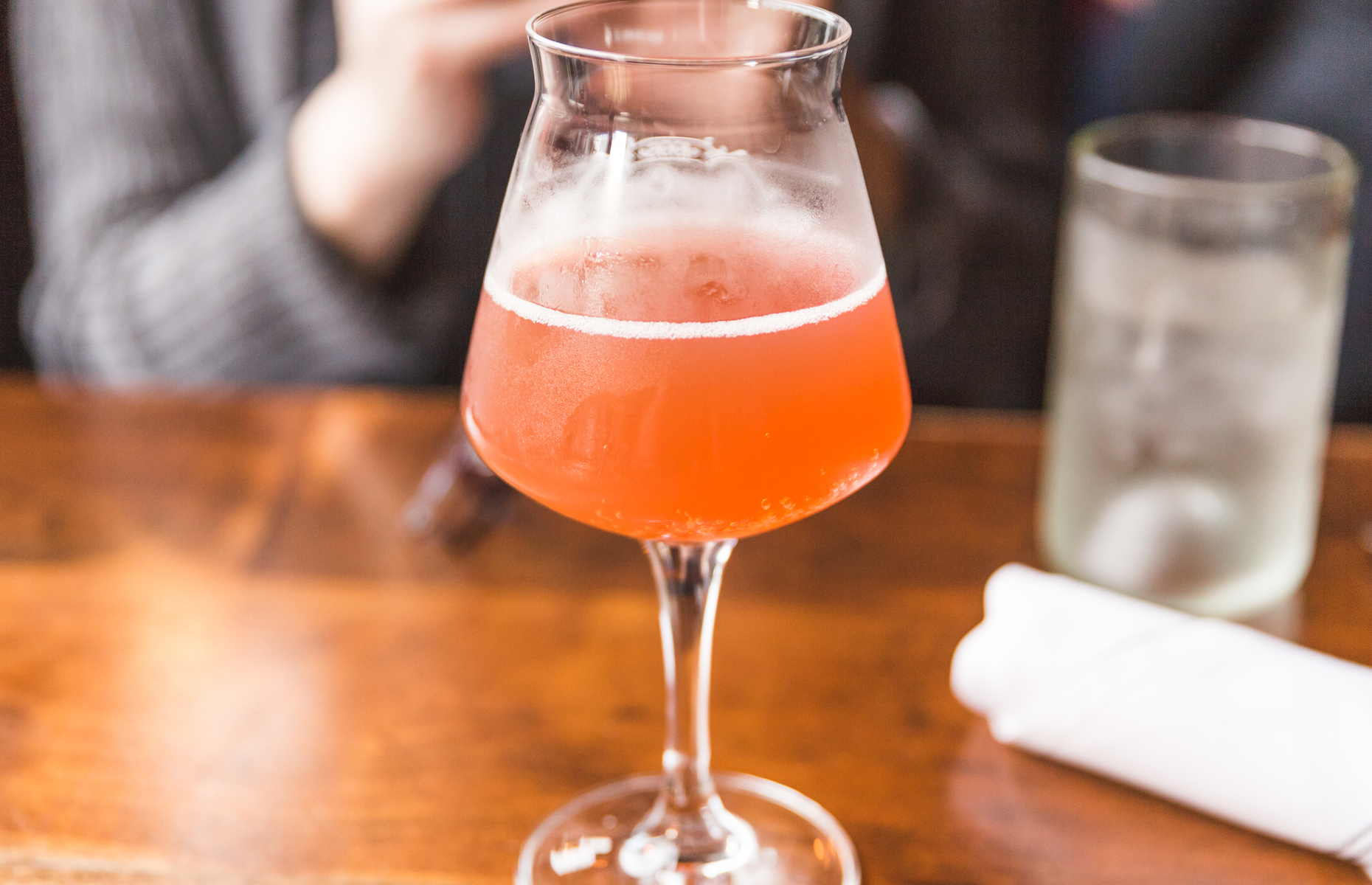 Percentage proof varies between brands, but by law any product with an alcohol content above 1.2% must say so clearly on the packaging. Beneath that, some brands (Kombucha Kat, Nirvana and Ombucha, for example) volunteer info on packaging anyway if products that are 0% or less than 1%.

If you’re worried about whether kombucha is halal, many sources agree that it is fine to drink – alcohol in kombucha occurs naturally and in very small amounts (too low to intoxicate).

READ MORE: A guide to Comté

What food pairs well with kombucha?

Kombucha’s sour flavour makes a great alternative to cider, sour beers and dry white wine. Pairings will vary from brew to brew but for example, Adam Vanni recommends serving Jarr’s Original brew with hearty grilled or fried food like steak, chicken or burgers, where the acidity of kombucha can cut through hefty fatty flavours.

He also notes that fresh and fragrant dishes are also a good match for flavoured kombucha: “My favourite pairing is our ginger kombucha with any kind of Asian cuisine: Thai, Vietnamese or Burmese food, or even sushi. Flavours of soy, ginger and wasabi work really well with it.” 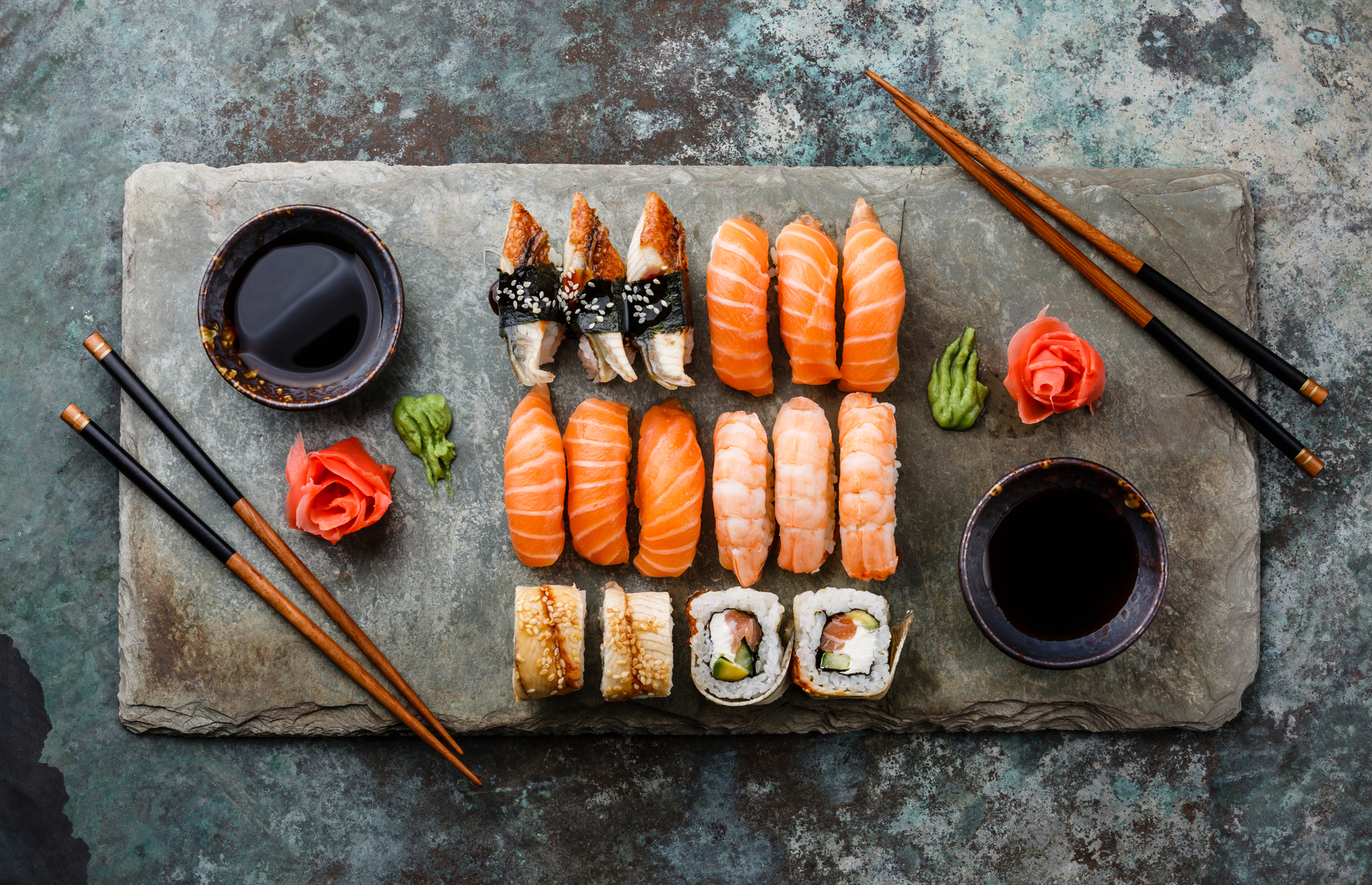 How can I make kombucha at home?

There are some brilliant guides and recipes online but the apparently simple process – boil fresh black tea, add cane sugar and a scoby (and the juice it came in), and let it sit, semi-covered, for a week – has a few key rules.

Make sure the water you use is dechlorinated. As tap water is chlorinated and water filters alone can’t remove it, you’ll need to let the water either sit out overnight, to disperse the chlorine, or you can boil the chlorine off and use the cool boiled water afterwards.

It’s important not to pour any hot water (anything over 35°C/95°F) onto the scoby. Likewise, in the winter it’s important for kombucha not to get too cold while it’s fermenting – anything in the 20s°C (70s°F) is fine but keeping it the fridge will stop fermentation. 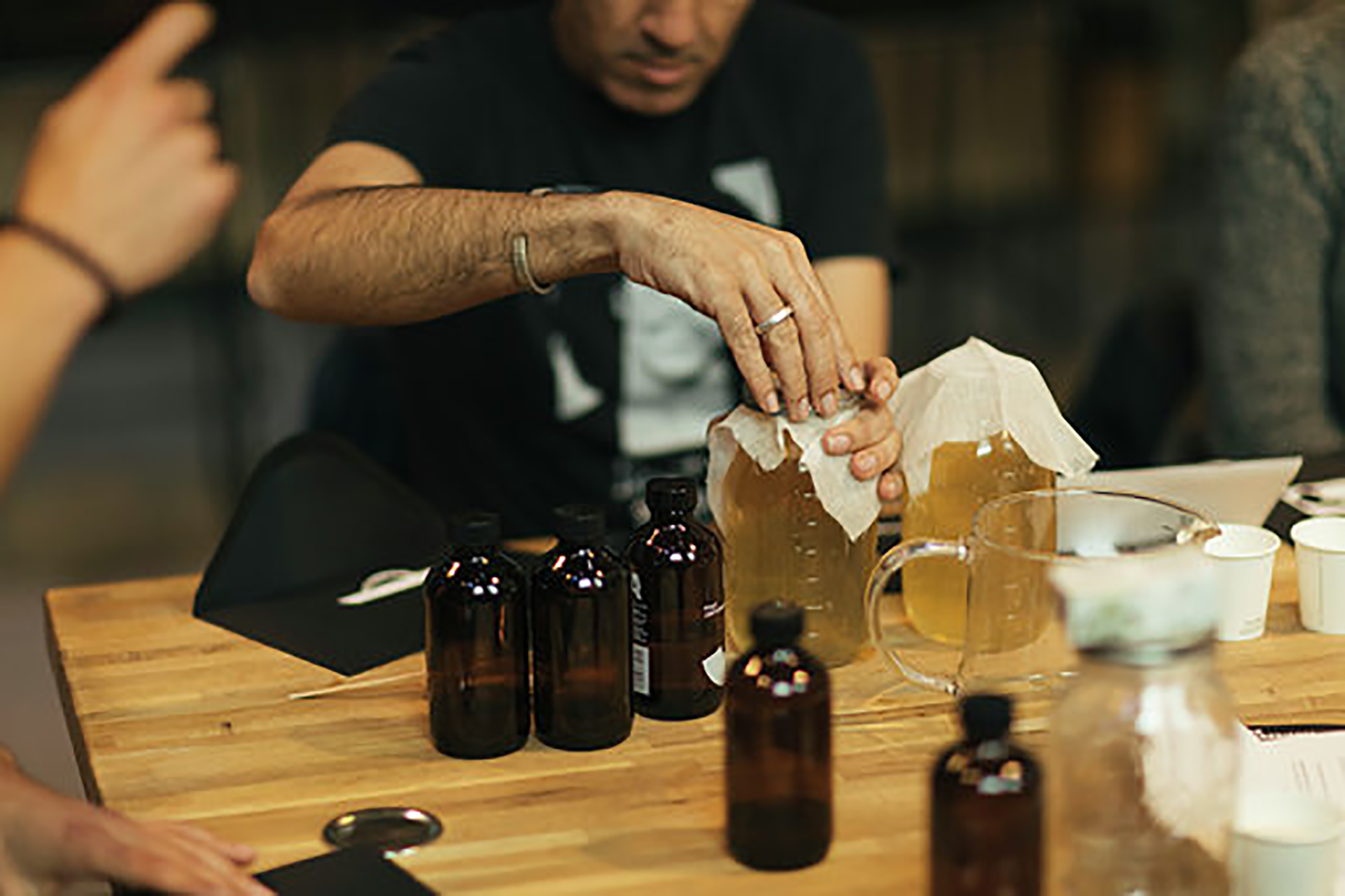 Finding a scoby is the fun bit. Kombucha-making friends can donate a portion of theirs or you can buy one online (specialist sites like Happy Kombucha are great places to start).

If you’re not sure about taking a DIY approach, experienced brewers run workshops all over the country.