A complete guide to jackfruit

Many in the West had not heard of this fruit until recently and it appears to have come out of nowhere to become ubiquitous as a meat substitute in vegetarian and vegan dishes. So what is jackfruit and how do you cook with it?

A big hulking fruit, jackfruit (Artocarpus heterophyllus) has rough, thick, spiky skin more like an animal’s than something from the plant kingdom. It’s from the fig and mulberry family, and colours range from yellow-green to bright green and pale brown. Often too heavy to carry, it can weigh as much as 55kg (120lbs) and is oval, oblong or round in shape. It’s in season in July and August.

Inside its hard shell, there’s a thick, fibrous, cream-coloured core surrounded by lots of fruit pods known as bulbs. These are the part that’s eaten, though technically they’re ovaries of flowers connected together rather than fruit.

They’re made up of fleshy, slippery petals fused together, which can come apart in strings like shredded meat. They’re pale yellow-green when unripe, becoming bright yellow to orange when mature. Each has a seed inside that’s edible when cooked.

Jackfruit has a pungent, challenging aroma, a bit like ripe tropical fruits combined with onions and summer flowers. The unripe fruit has a subtle taste which, when ripe, becomes distinctive – like a cross between overripe bananas, pineapples, mangoes, melons and honey, with very slight nuttiness and astringency. 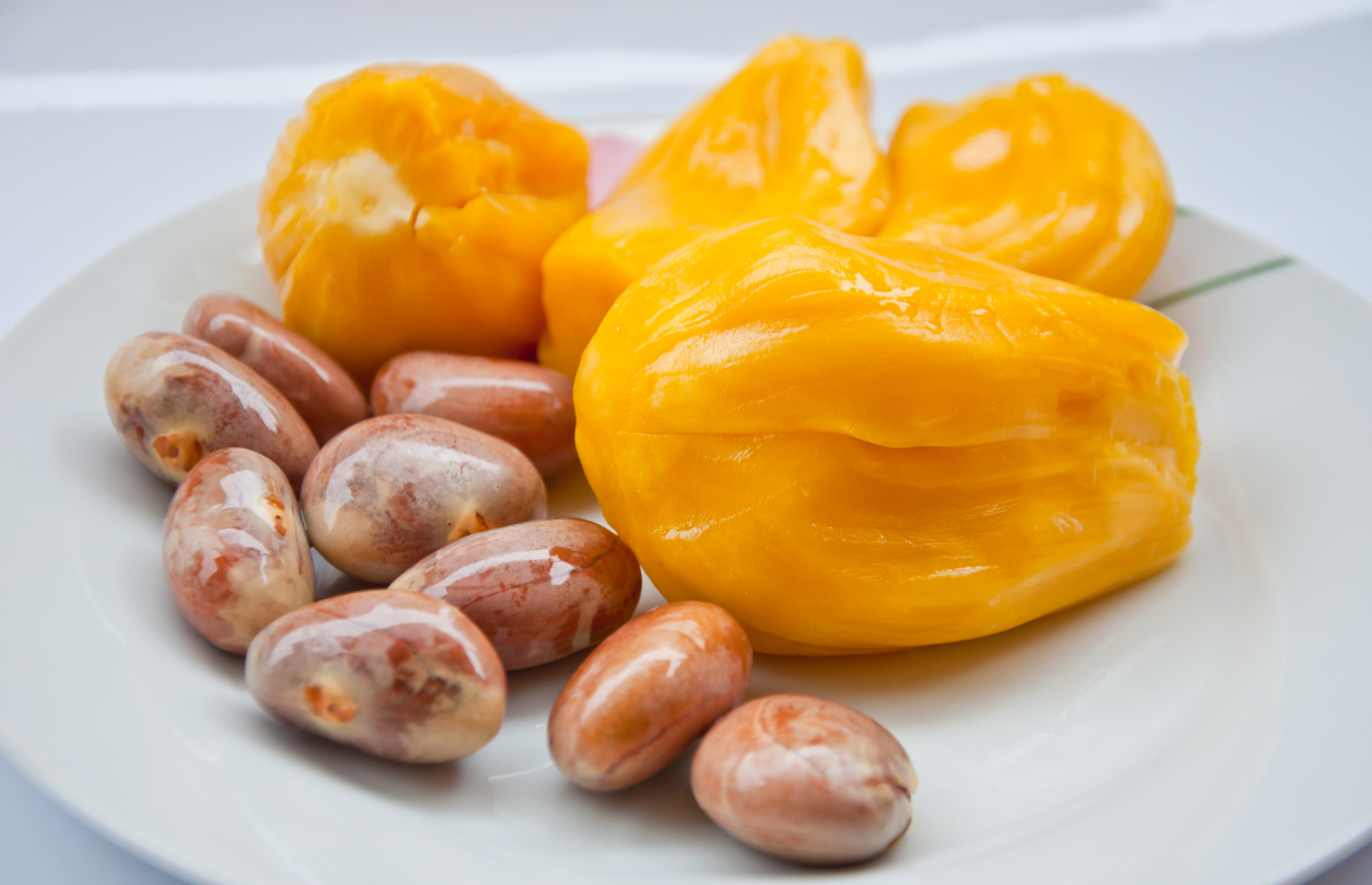 The poetic Bengali language says it the best, referring to jackfruit as ‘gach patha’ – literally meaning ‘tree goat’ or more broadly, ‘mutton of the trees’. The fruit has been used as a meat substitute in South Asia and Southeast Asia for centuries, especially for feeding large crowds during religious festivals or whenever meat was too expensive.

More importantly, it’s loved as a hugely versatile ingredient in its own right. It grows in tropical countries throughout the world and is also eaten in Africa and South America. The Western world started using it as a meat substitute during the rise of veganism less than a decade ago and it’s now become a commonplace ingredient.

Where does jackfruit come from?

The fruit is believed to have originated in the area between the Western Ghats of South India to Borneo’s rainforests, and was cultivated in India between 3,000 to 6,000 years ago. The word comes from Portuguese ‘jaca’, based on ‘chakka’ in Malayalam language. This in turn derives from the word ‘ka’, meaning fruit or vegetable in ancient languages that predate Sanskrit. The name was first recorded in English in the 16th century.

Jackfruit has been domesticated separately in South Asia and Southeast Asia. India is the largest producer where it’s the official fruit of Kerala and Tamil Nadu. It is also the national fruit of Bangladesh and Sri Lanka. In Asia, where jackfruit harvest is buoyant, there are many jackfruit festivals and a strong tradition of giving the fruit and sweet preparations made from the fruit as gifts.

Is jackfruit good for you?

The fruit contains dietary fibre, vitamins A and C, several minerals including potassium and is low in calories. It’s believed to help control blood sugar and the seeds are high in protein.

What's the difference between ripe and unripe jackfruit?

Jackfruit-producing countries distinguish the many varieties by the firmness or softness of the bulbs’ flesh and sometimes their size. Additionally, unripe and ripe jackfruit is used very differently.

Unripe has a milder, nuttier, less sweet taste which is reminiscent of artichoke hearts, and the flesh is firmer and meatier – good for absorbing the flavours of spices and sauces. This is jackfruit’s biggest appeal in the West. Labelled as young jackfruit when sold in tins, it’s often used as a meat substitute in cooking for dishes like vegan pulled pork, burgers and tacos. 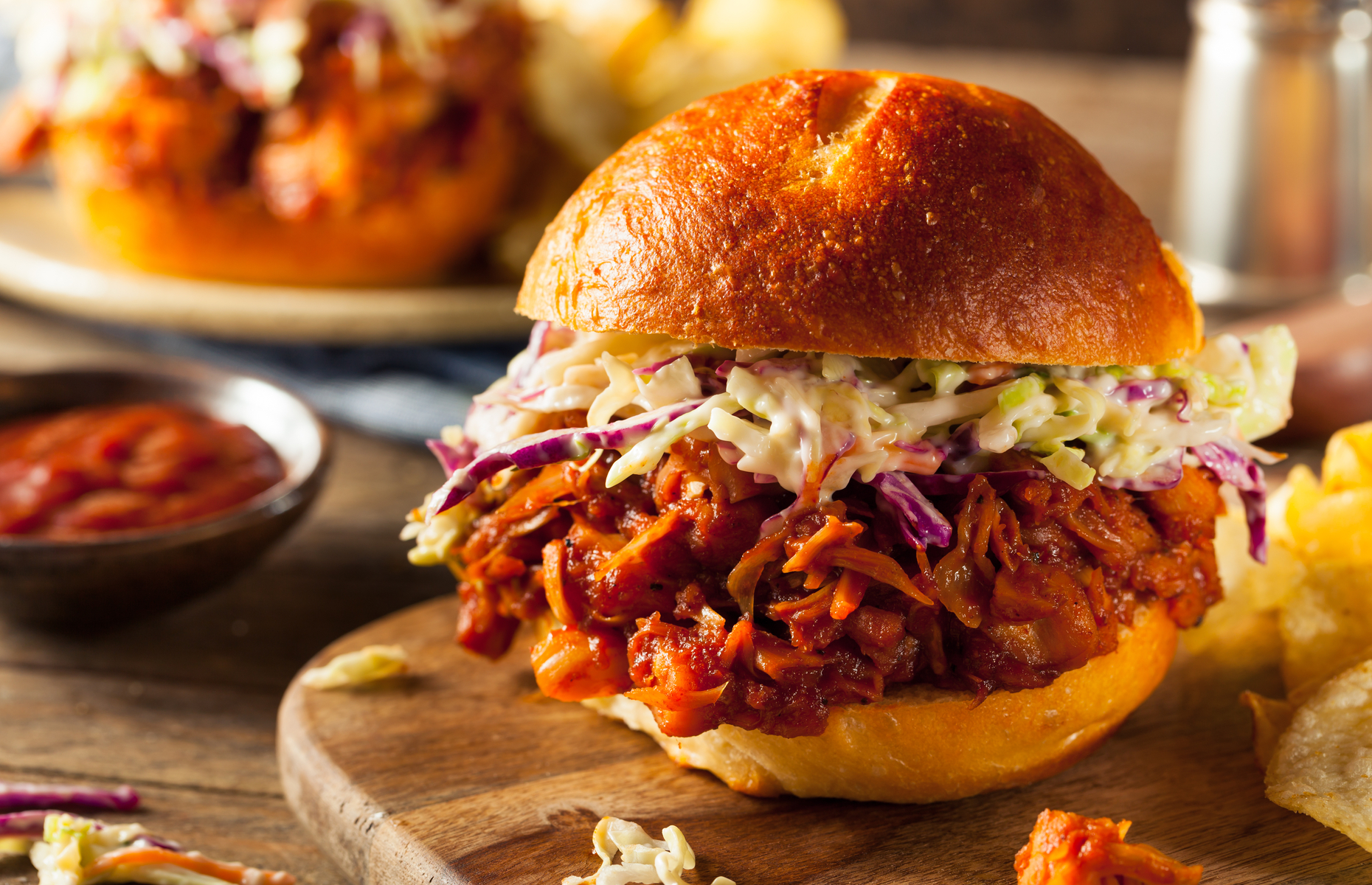 In Asia, Africa and South America, unripe jackfruit is pan-fried or boiled, and used in many different regional dishes: curries, stews, stir-fries and salads. Its texture makes it a perfect filling for chops and cutlets; adding to biryanis and pulaos; shaping into kababs and koftas; frying into many varieties of fritters; and more.

The distinct flavour of ripe fruit, on the other hand, makes it suitable for eating as a fresh fruit. It’s also added to fruit salads, cakes, custards, pastries, desserts and ice creams. Indian sweets such as barfi, halwa and payasam can come infused with jackfruit, as well as South Indian idli (a savoury, steamed rice cake), dosa batters and rice flour dumplings.

It’s added to a wide range of Southeast Asian drink-desserts with shaved ice, such as es campur, es teler, chè Thái, and halo-halo. The fruit is also juiced, whizzed into milkshakes and made into a syrup for soft drinks and cocktails. 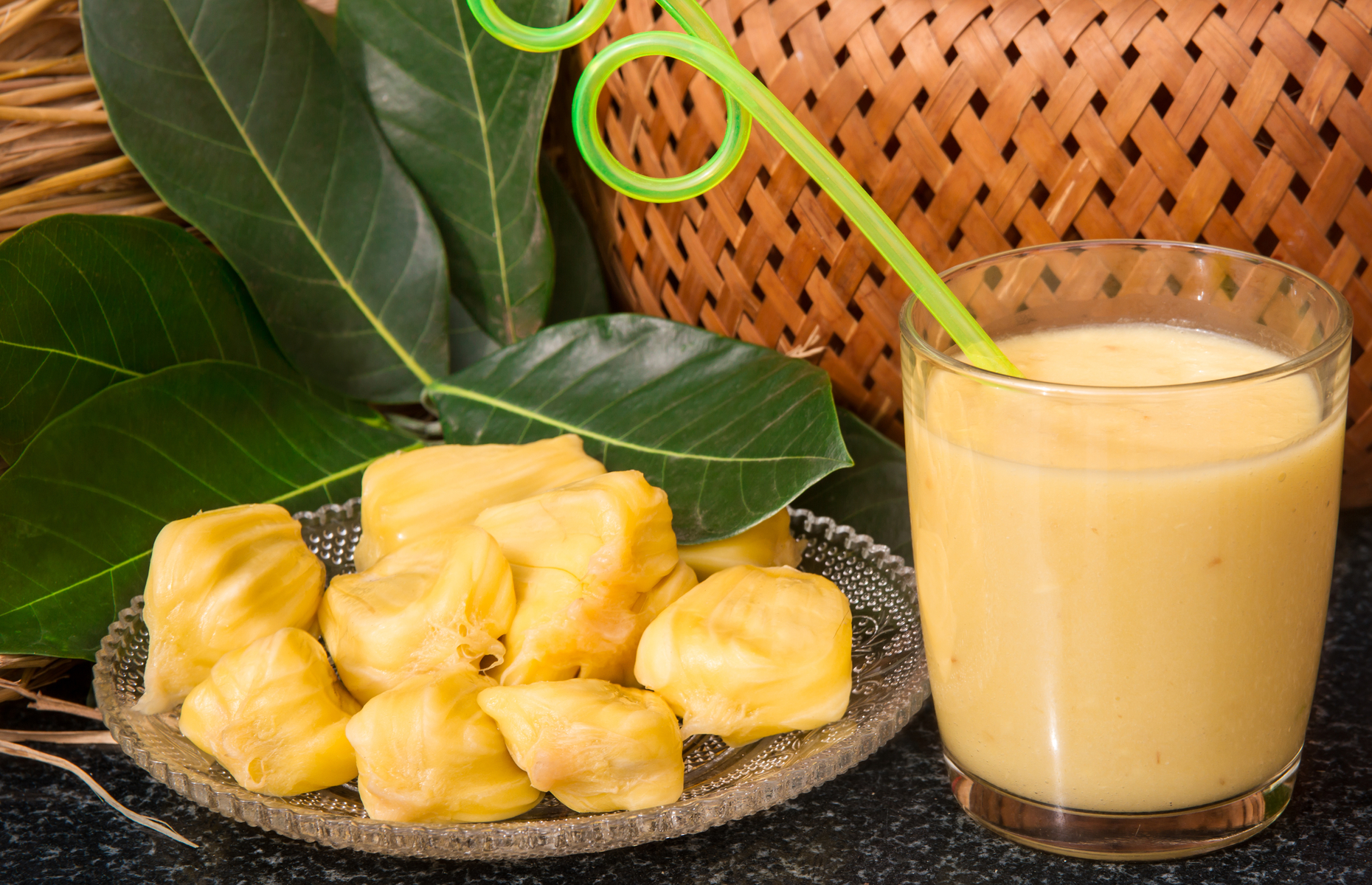 Can I eat jackfruit seeds?

The plump grey-brown seeds, which become cream-coloured as they dry, look like butterbeans and are edible. They should be boiled, baked, roasted, cooked on a charcoal fire or sun-dried for later use.

The waxy potato-like insides have a sweet, nutty taste, and the roasted ones are uncannily similar in flavour to chestnuts. They’re eaten plain, salted or with chilli powder as a snack, and added whole or crushed to chutneys, curries, desserts and confectionery. The seeds are also crushed to make a coffee-like hot drink, ground into flour and added to spice mixes. 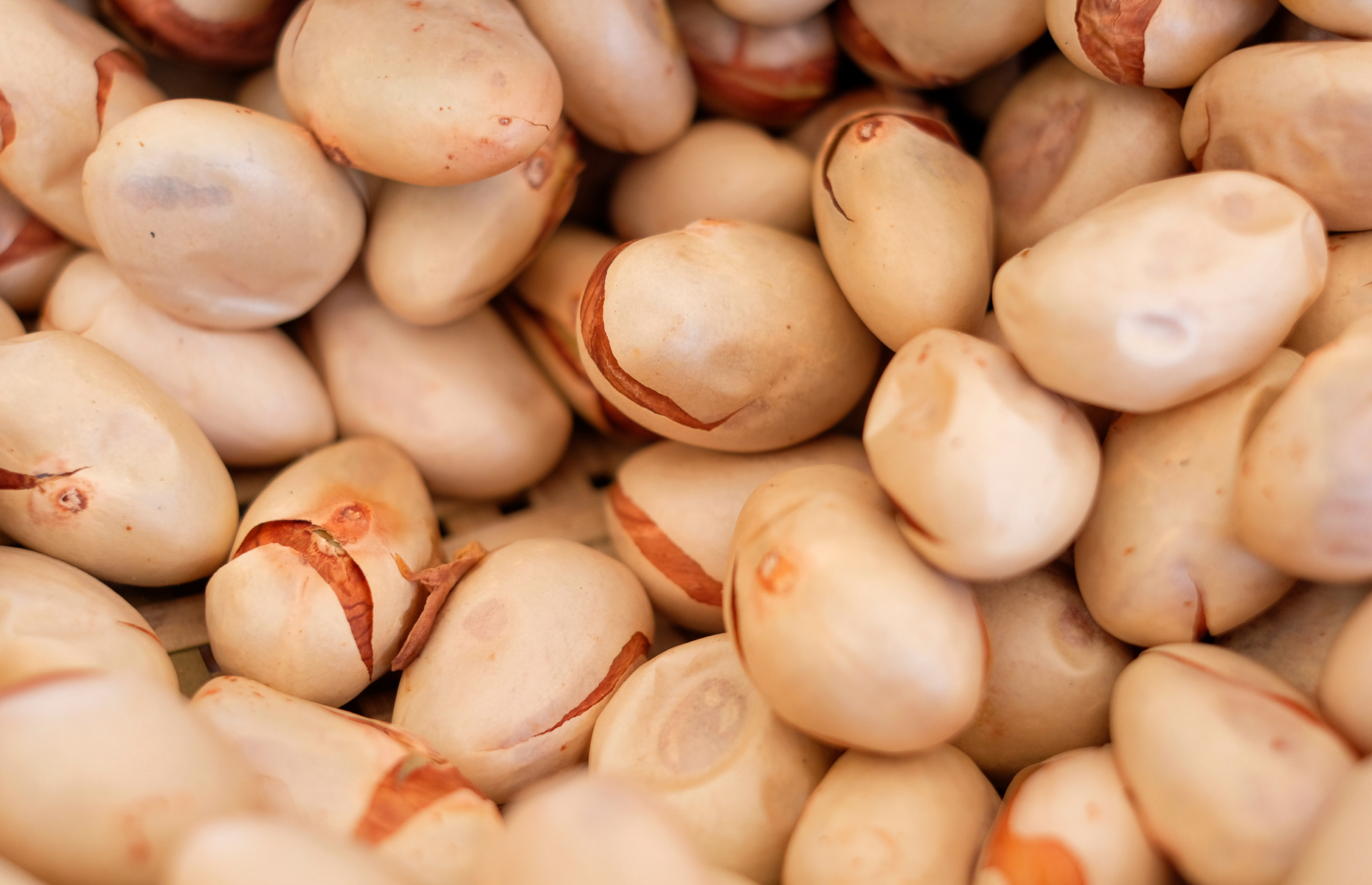 Other parts of jackfruit aren’t wasted either. The core is sometimes cooked and the leaves are used as a wrapping for savoury or sweet steamed rice flour snacks, or for feeding cattle.

Where can I buy jackfruit?

In the UK, tinned jackfruit is widely available in supermarkets and corner shops, and should be rinsed before use.

When buying fresh, it’s best to purchase it ready-prepared, available in many Asian grocers and greengrocers, including Chinatowns. Larger branches of health food stores also stock it.

The fresh fruit is sold either as whole bulbs or cut into chunks from which you’ll have to carefully extract the half-cut bulbs and seeds – a tricky and labour-intensive task. The seeds are sold separately in Asian greengrocers all year round.

How do I prepare jackfruit?

If jackfruit is only available whole, ask the vendor to cut it for you as it’s a lot of hassle to prepare it at home. For a start, there’s the cumbersome weight. Then, due to its distinctive smell, you may have to chop it outdoors or in a well-ventilated room, covering the work surfaces with newspapers. 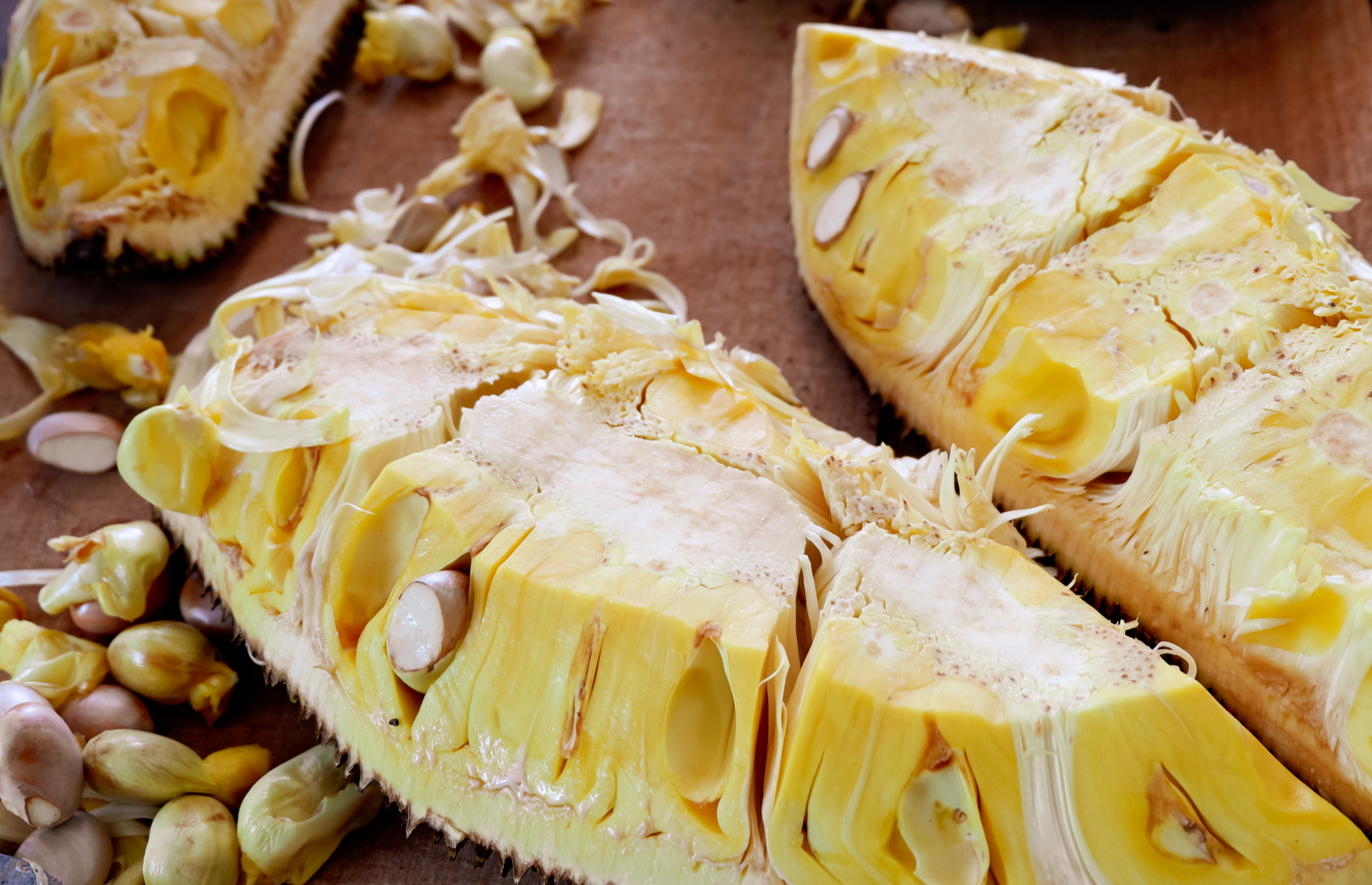 You’ll need a large knife and it’s essential to coat your hands in a thin layer of oil or ghee, or wear gloves. Otherwise they’ll become itchy and covered in slimy membrane. Cut steadily and forcefully, without peeling, into quarters, one-eighths or smaller chunks.

Need some inspiration to start cooking with jackfruit? Try out these fantastic recipes: