A complete guide to yogurt

This ancient food has been around for thousands of years but in the West has only relatively recently shaken off its hippy-dippy reputation. With numerous varieties to choose from and versatility as an ingredient in sweet and savoury dishes, yogurt is an underrated food. Here's our guide to the white stuff, including how to make your own and our best yogurt recipes.

Unlike the Balkans, South Asia, Central Asia and the Middle East, there isn’t a tradition of eating yogurt in contemporary Western cultures – and it’s long been a butt of jokes. Think vegetarians being dismissed as “knitted yogurt and sandals brigade”, or yogurt promoted as health food aimed mostly at women, or a child-friendly sweet treat.

However, things are changing. Cookery writers such as Yotam Ottolenghi and Yasmin Khan have popularised its use in savoury dishes; celebrity health figures like Dr Rangan Chatterjee are highlighting the importance of fermented foods for healthy gut bacteria; and more and more types of yogurt have become available in mainstream supermarkets.

This white to cream-coloured, semi-solid dairy product has a custard-like texture, but the taste can vary from mildly tangy to distinctly sour. It’s made from milk that’s been fermented with the addition of bacterial cultures, turning its natural sugar lactose into lactic acid, which gives it its characteristic tart taste and thick consistency.

Yogurt is, in a word, old – and like many of our favourite foods today, its creation was likely an accident. According to Yogurt In Nutrition, the earliest traces of yogurt were found between 10000 and 5000 BC during the Neolithic era. Some studies have found that that the initial bacteria grew on plants, likely to be grass, when it came into contact with milk-producing animals.

Several other publications such as Di Wine Taste and The Sensory Evaluation Of Dairy Products mention that herdsmen or shepherds in Mesopotamia carried their milk in bags made of animal skin and stomach, and the enzyme contained in them caused the milk to ferment into a thicker, longer-lasting liquid, making yogurt’s discovery accidental. The word comes from Turkish ‘yogurmak’, meaning to curdle or thicken, and may be related to ‘yogun’, meaning dense.

But mentions of yogurt go back even further than that. It’s referenced in the Bible and ancient Ayurvedic texts; and one of the oldest written records comes from Roman philosopher Pliny The Elder (AD 23/24–79) who described it as “an acrid kind of milk with a pleasant flavour.”

But when it was first introduced to Western Europe, it wasn’t hailed for its taste – but for its health benefits. In the 16th century, a doctor from Turkey successfully prescribed King Francois the First of France yogurt to cure his digestive problems. In the early 1900s, it was available in pharmacies in the form of tablets or starter culture as a digestive aid. 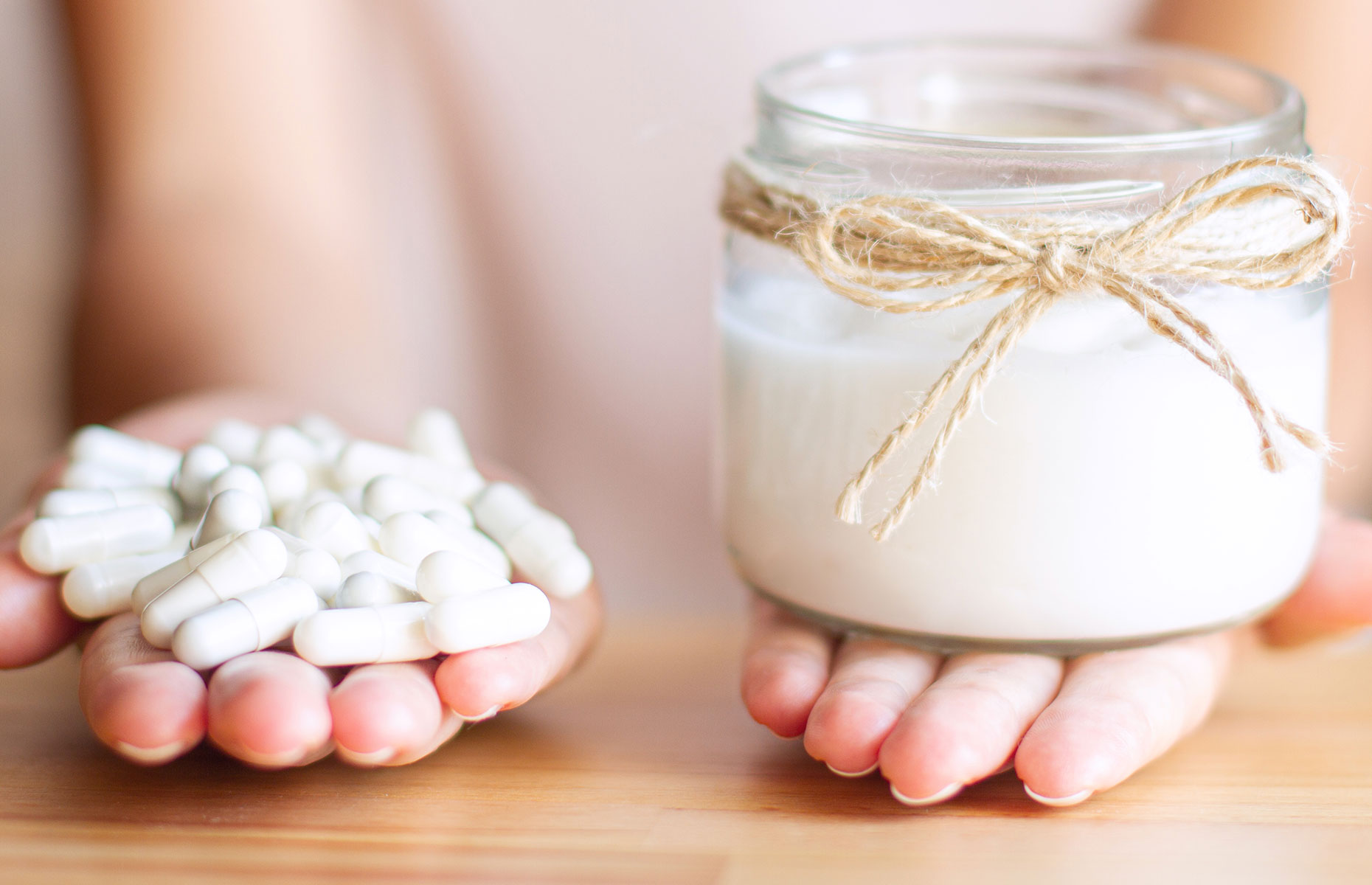 The first commercial yogurt was made by Isaac Carasso in Barcelona in 1919, who launched the Danone brand after an affectionate name for his son Daniel. Daniel Carasso then went on to open the first yogurt factory in France in 1932. Scientists continued promoting it as health food in the 1950s and Sixties, but it was too tart for Western tastes, so sugar and fruit were added, and a new instant dessert was born.

Is yogurt good for you?

Yogurt’s health benefits have been known since the ancient times of Greek physicians, Bulgarian shepherds, Mongol warriors and Ayurvedic practitioners. It is rich in protein, minerals, calcium and vitamins, particularly B12, and is believed to help improve the immune system, and cardiovascular and metabolic health.

READ MORE: Our guide to tofu

The main area of nutritional interest is its role in keeping the gut and bowels healthy. In 1905, Bulgarian medical student Stamen Grigorov studied yogurt’s microflora and the health effects of lactic acid, resulting in the bacterial culture being named after him: Lactobacillus delbrueckii subsp. bulgaricus.

Influenced by his work, Russian biologist, Professor Ilya Ilyich Metchnikov, was the first to discover the role of yogurt in keeping gut bacteria healthy. More specifically, it’s the live bacteria in probiotic yogurt that increases the diversity of microbes in the gut that helps with digestion and digestive issues.

In addition to probiotic, there’s now a mind-boggling variety of yogurts widely available in the UK – made from different milks and using different processes. Cows’ milk is the most common, but there are also yogurts made from ewe, goat and buffalo milk; and non-dairy varieties made from soya, nuts, rice, coconut and other ingredients.

Yogurt may or may not be homogenised: a technological process that prevents cream separating from milk. Some are made from raw milk, but most are pasteurised, which means milk is given a gentle heat treatment to destroy harmful bacteria and prolong shelf life.

A range of yogurt cultures can be also added and in some countries, there are regulations about the amounts you can use. All this makes yogurts taste very different. These are some of the most common types found in the UK.

READ MORE: Everything you wanted to know about Parmesan

Often labelled ‘live’, this is pasteurised yogurt to which small quantities of friendly bacteria have been added. If buying yogurt for health reasons, this is the best choice.

Yogurt with added sugar, sweeteners, fruit and other flavours to tone down its tartness; and an unsweetened variety known as plain or natural yogurt. 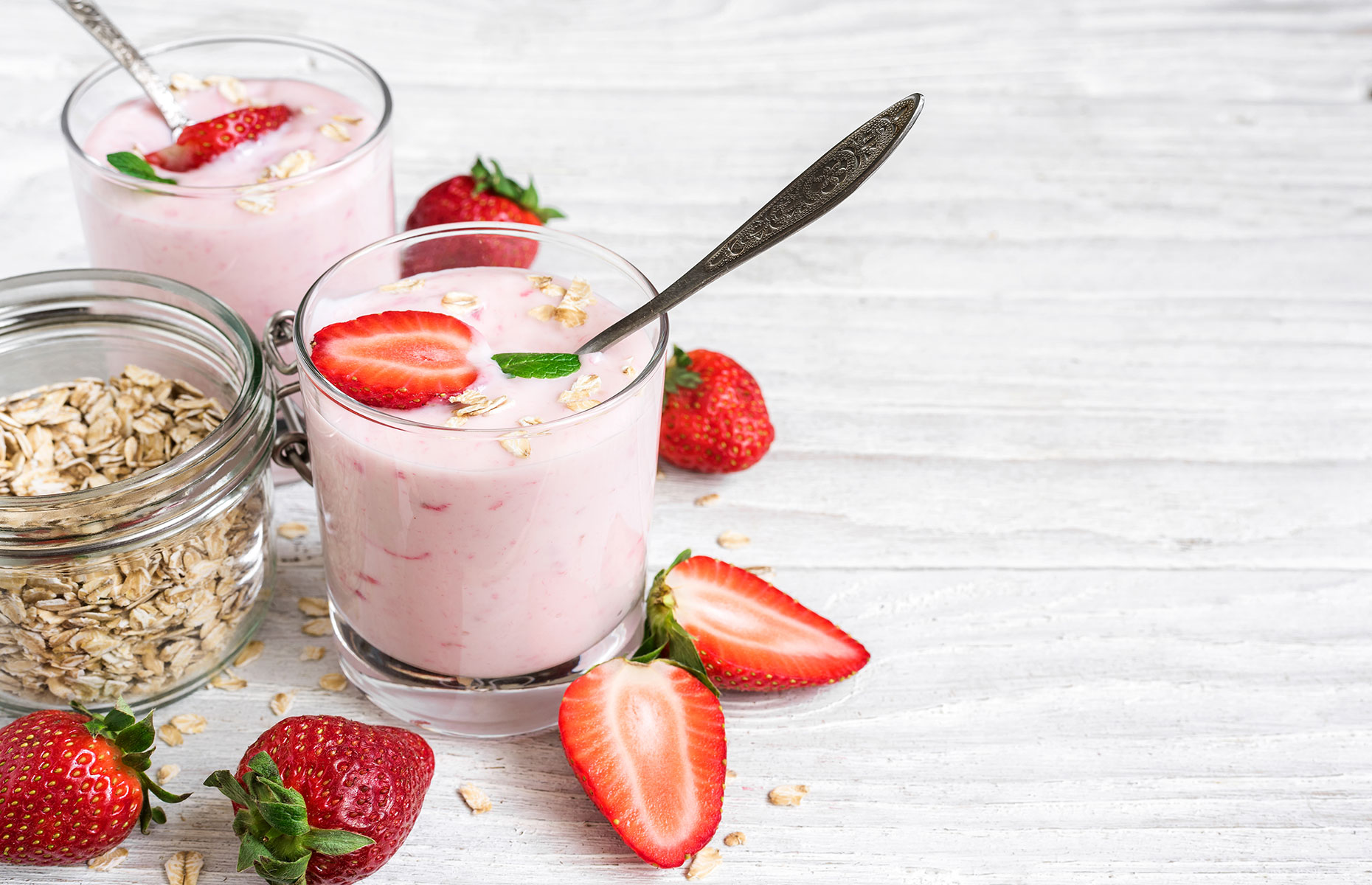 Fat-free yogurt is made from skimmed milk; full-fat from whole milk.

Set yogurt is set in the container in which it is sold, also known as French-style. Unset yogurt is runnier in consistency, and also known as Swiss or stirred. If the packaging doesn’t say set, then assume it’s unset. Set yogurt is ideal for eating and serving with desserts; unset is best for cooking.

Unrelated to Swiss (i.e. stirred), this is yogurt made thicker and creamier with the addition of pectin, gelatine, modified starch, milk powder or stabilisers.

These are all strained yogurts with their whey removed, but in the UK, Greek yogurt must by law be made in Greece. Greek-style is yogurt made anywhere else that’s as thick and creamy as Greek due to repeated straining.

One popular brand makes ‘kerned’ yogurt – an old English term from Somerset for yogurt that’s been strained up to nine times to make it extra-thick. Strained yogurts are milder in flavour and are perfect for desserts.

Yogurt made from a fermented milk drink from the Balkans and Eastern Europe. The drink itself is made from cultures known as kefir grains, giving the yogurt a notably sour taste.

An ancient Icelandic cultured dairy product whose popularity in the UK is sky-rocketing. It’s milder and less tart than regular yogurt, and as thick and creamy as strained yogurt.

There’s also frozen yogurt eaten like ice cream; dried yogurt which goes by kashk and other names, used in stews and soups in Middle Eastern cuisines; and labneh, a cheese made from strained yogurt that has had all the whey removed.

How to make yogurt

You can buy electric yogurt making machines and yogurt starter cultures but the traditional method is simplest and the best.

According to Arto Der Haroutunian’s excellent The Yogurt Cookbook, you don’t need anything fancier than a clay pot with a lid. Heat milk until lukewarm, let it cool down, add beaten live yogurt, combine well, empty into a covered container, and leave in a warm place without disturbing for several hours or overnight.

There are also more detailed guides based on trial and error like this one from Serious Eats. And don’t forget to keep aside a few tablespoons of homemade yogurt for your next batch. If you fancy a bit more of a project, give our labneh recipe a go.

Yogurt is used in salad dressings, marinades, dips, soups, stews, curries, desserts and baking. Use it at room temperature and whisk before adding, bit by bit, to hot dishes while cooking otherwise it may curdle. Full-fat yogurt is more stable, so it’s best to cook with. If using low-fat, add a little paste made from cornflour and water.

Yogurt is a wonderful tenderiser for meat – mix it with spices and coat the protein. It'll also give it a lovely crust after cooking. Try this tandoori chicken recipe, which is also served with a cooling garlicky, herby raita, or this saffron-spiked chicken korma.

A drizzle of yogurt also adds a cooling element and an extra note of interest to heavy dishes. In this kidney bean and sweet potato stew recipe, it provides contrast to the hot mint oil and hearty sauce. Yogurt takes on flavours well, especially garlic and herbs: try this herbed yogurt which lifts earthy roasted carrots, or roasted green chilli-infused yogurt to dollop on burgers.

It's ideal for baking too – yogurt's creaminess keeps cakes moist and the acidity reacts with the raising agent, making sponges light and fluffy. Give it a go with our classic raspberry, lemon and yogurt tea loaf. Or use it to make healthier desserts – we love these easy chocolate pots and this take on an Eton mess which uses zero-fat, Greek-style yogurt instead of cream.