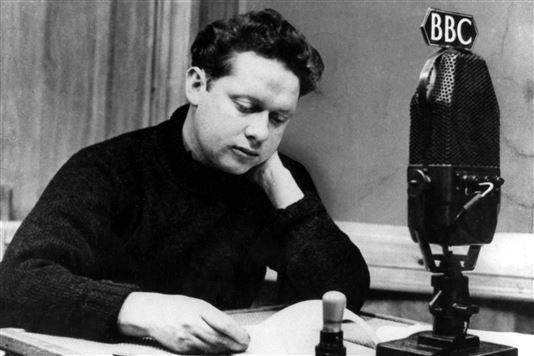 A movement in Wales is hoping to establish Dylan Night as an annual event every 9th November in honour of the poet Dylan Thomas, in much the same way Burns Night is celebrated in Scotland.

Burns Night is a big event for many Scottish people, although it’s also celebrated in the rest of the UK too and not just by Scots. And if Scotland has a night dedicated to its most famous poet, why not the rest of us?

Dylan Thomas's writing left a huge mark on the literary identity of Wales. His most well-known and popular works include A Child’s Christmas in Wales and the poem And death shall have no dominion.

He died aged 39 on 9th November 1953, after returning to a hotel in New York while on tour, boasting that he had drunk 18 straight whiskies.

Graham Parker, who started the campaign for Dylan Night, says: “There is no artist in recent Welsh history who comes close to Dylan's global renown. I believe he is already as important a cultural figure for Welsh people as Robbie Burns is for the Scottish.”

Graham held a Dylan supper for the first time in 2012, just with friends at home, but decided he would share the idea, as he couldn’t find any similar movements. He's sure “Welsh people all over the world will start hosting their own Dylan Nights” as they will find it both “fun and deeply moving.”

What’s on the menu?

For starters, traditional Welsh laverbread would work a treat. The Dylan Night website suggests pairing it with scallops and bacon; perhaps a twist on angels-on-horseback would be appropriate?

For the main course, you’ll be wanting a cawl. It’s a rich Welsh stew which can be served as a meat dish or vegetarian. You'll find our hearty leek and lamb cawl recipe here.

And to finish, a simple seasonal dessert like this apple and blackberry crumble, topped with custard, works wonders.

The Order of Celebration also includes poetry readings, and the distribution of 18 tots of whiskies among guests. As each guest downs their glass, they should recite, from one of Thomas’s most famous poems, “And death shall have no dominion.”

How about an English poet?

There was talk in 2006 of the introduction of an official day or night dedicated to William Shakespeare. But with the financial crisis that followed and a subsequent new Government, the idea seems to have been largely forgotten – though there are still many who would like to see it happen.

But if we did have a day for the Bard (the suggested date was 23rd April, which is his birthday ), what would we eat and drink?

I would suggest the drink should be wine, drunk sensibly, as “good wine is a good familiar creature, if it be well used” (Othello 2:3). Ale would also suit the proceedings, being the drink of choice at the time.

“Prove this a prosperous day,” says Caesar in Anthony and Cleopatra, “bear the olive freely.” Prove it an even more prosperous day by eating them as your starter, marinated either in ginger, cinnamon and cardamom, or in oregano and chillies.

As for mains, steer clear of beef, as Sir Andrew Aguecheek says in Twelfth Night (1:3): “I am a great eater of beef, and I believe that does harm to my wit.” Other meat works though.

Perhaps cook up, as demanded by Shallow in King Henry IV, part 2 (5:1), “Some pigeons, a couple of short-legged hens” and “a joint of mutton”. This might be a bit much for small parties, so take your pick of just one or two smaller things to enjoy as part of a meat feast in the Bard’s honour.

To round off, the classic combination of apples and cheese is a good pick. Sir Hugh Evans finishes off his dinner with this in the first scene of The Merry Wives of Windsor, although he calls apples ‘pippins’. If you want to cook up something fancier, try these Cheddar bites, flavoured with apple and hazelnuts.

Will you be celebrating Dylan Night? Do you think that a Shakespeare Night is a good idea too? Let us know your thoughts in the Comments below.

The best regional foods of the UK

Whiskies to go with food

What is haggis? A wee history