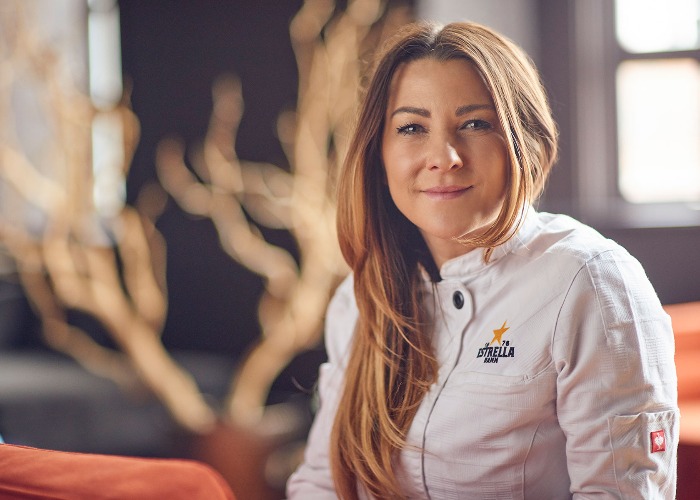 Former MasterChef semi-finalist Liz Cottam has been a professional chef for just three years. We spoke to her about her meteoric rise, the opening of her Leeds restaurant Home and keeping sane thanks to Zumba…

Until 2016 Liz Cottam had never set foot in a professional kitchen. All that changed thanks to an appearance on MasterChef which saw her step back from a corporate career and open Home in Leeds, now much-lauded for its monthly-changing menu and exceptional service. We caught up with the chef taking a rare night off at Estrella Damm’s Supper Club Sesenta.

What was life like before you became a chef?

Three years ago I was running businesses that did a number of different things including creative, communications and marketing. But cooking was always a part of my life. Almost every weekend I'd do huge dinner parties for 14 friends, with six-course tasting menus just for fun.

You applied for MasterChef twice – what made you say yes in the end?

Back in 2013 I’d had a few wines with friends and they persuaded me to apply for the show, as friends do. We cobbled together an application, I went for a screen test and they asked if I wanted to be on the show. But when I looked at the schedule, I didn’t have the time. It had been a whirlwind and my heart wasn’t really in being on telly, so I said no.

My mum was a bit disappointed as she’d been so excited about “my Elizabeth on the television”. She didn’t make me feel bad about saying no but she said to my sister, “I wish she’d gone on”.

Fast foward two years after that first application and I spotted a Facebook reminder, with a picture of me and my friends from the first night I’d applied for MasterChef. I sat back and thought, “Oh mum really wanted me to do that and things are different now”. By that point I’d gone part-time at work. I was doing photography and sketching, trying to work out what I could do that would give me the creative satisfaction I needed.

So I put another application into MasterChef about a quarter to midnight. Earlier that same day mum had been taken to hospital with stomach pains, and at about half two in the morning I had a phone call to say she’d passed away suddenly.

Of course you can post-rationalise anything you want – and I clearly wanted to join the dots – but at the time it felt MasterChef was something she’d want me to do.

When I was mourning my mum, I would go into the kitchen for nine or 10 hours and that stopped me from feeling upset about what was going on.

You made it to the semi-finals. Did you enjoy it?

MasterChef was like torture for me! Being a control freak and trying to create something wonderful in a teeny-weeny amount of time… I should have known it was a stupid endeavour. We were all trying to do so much to impress.

Every few hours it felt like there was a camera in my face and somebody asking me “Do you want to be a chef?” And I was like: “No! I’m not an idiot. I come from a business background and I know it’s a high-risk industry.”

READ MORE: MasterChef UK winners – where are they now?

What turned it around for you?

The moment I went into a professional kitchen changed everything

It felt like that was completely right for me. There was a great kitchen team at L’Amina in London, they were amazing. I feel like I’m a pack animal and when I got into the kitchen I loved the vibe, the energy and the team ethic. I realised it was where I needed to be.

Gregg came up to me at one point when I was in a professional kitchen and said “You hate the studio don’t you?” I remember saying “Yes I can’t stand it!”

What was the biggest thing you learned?

That I don’t always enjoy cooking on my own. When I came out of MasterChef I did a few pop-ups but I found it too solitary. But I knew I wanted to test the water more and I persuaded the commercial director of a hotel group to lend me a disused kitchen in Leeds.

I cobbled together a team and put on a tasting menu that was well received. I made a point of meeting all the customers and the idea was to make it feel like a dinner party. People would say to me “Oh it’s fancy-pants food but you’re not making me feel like an idiot for asking questions. You’re making me feel at home”. I thought that if I ever opened a restaurant, it would have to be called Home.

How did Home come about?

I sat down with the CEO of the hotel chain who'd loaned me the kitchen and he was interested in investing. I’d also met Mark Owens, my now business partner from the Michelin-starred The Box Tree restaurant and we raised the money. We’re 100% independent.

We found the new space for the restaurant and on 18 August 2019, we’ll be two years-old. We’ve been pretty much fully-booked since we opened.

It’s moved on from the dinner party feel but the genes and chromosomes are always about making people feel welcome.

READ MORE: Meet Clare Smyth, the only female chef in the UK with three Michelin stars

What's so unique about Home?

We change our menus every month and I don’t know anyone at this level who really does that. But I would go crazy having the same dishes for any longer. What inspires me is the creative process. We have a different menu on a Sunday so we’re creating four menus a month. It means we’ve done hundreds of dishes already at Home.

Why is local produce so important to you?

Because we change our menu every month, we’re naturally filling it with food where it’s not just the season to shine, it’s the specific month.

At the moment there’s asparagus in season and there are three weeks before that little bad boy disappears. Strawberries are another example. August is the time when they’ve been sat on the vine for the right amount of time to taste great. So we’ll use them just in August.

It can be harder using smaller suppliers because they can’t always offer the volume we need, but we start locally. It surprises people what you can get when you look, for example we’re getting our caviar from an ethical producer in Yorkshire.

Which other chefs do you most admire and why?

My obsession is Grant Achatz from Alinea (a three-Michelin star restaurant in Chicago) because if something can’t be done, he wants to do it. The way that he and Nick Kokonas put Alinea together took away assumptions about restaurants should be. It’s a mentality similar to my own.

I love seeing somebody bring that brave way of doing things to such a great success. It proves you don’t have to do it in the way everyone else does to be successful. 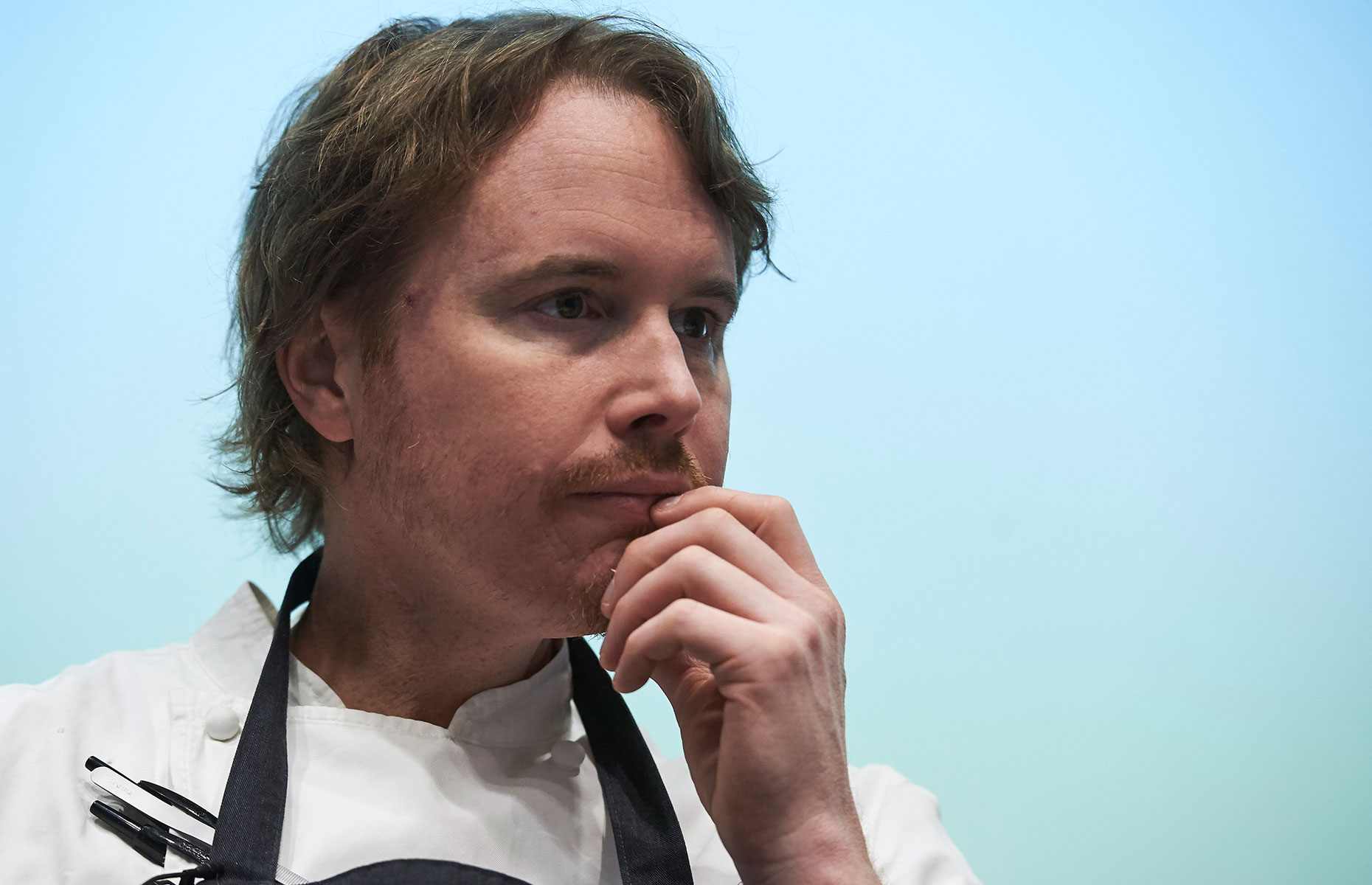 I was lucky enough to go and eat at Alinea. There’s a part of me that thought “What if this is all emperor's new clothes?” But I’m pleased to report it was fabulous.

How do you achieve a work/life balance?