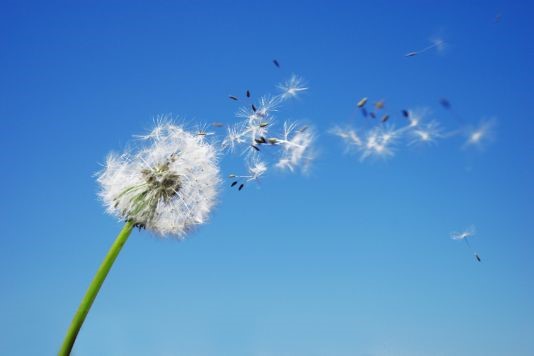 Say goodbye to your hayfever symptoms this season with these foods...

If you’re one of the 12 million people in the UK blighted by hayfever, summer won’t be your favourite time of year. Itchy, watery eyes and red inflamed skin can make you feel like hiding away until your symptoms disappear. But you don’t need to avoid going out if you follow our naturally good solutions.

The conventional approach to hayfever says it’s an allergy to pollen and the best you can do is to avoid it and take over-the-counter anti-histamines.

The daily pollen count peaks between 9 a.m. and noon and generally is at its lowest around 8 p.m. You can also get a pollen filter fitted to your car and lay laminate flooring rather than carpets, which can trap allergens.

However, a combination of nutrition and supplement can both decrease the symptoms of hayfever, as well as prevent them in the first place.

Two of the food groups that most often aggravate hayfever are dairy products and grains because they stimulate the production of the mucus membrane in your nose, so look for alternatives such as soya milk.

Refined foods and sugar are also worth avoiding because they are believed to make your body’s immune system more sensitive to allergens, such as pollen.

Look to increase your intake of anti-oxidants and bioflavonoids because they help boost your immune system and are anti-inflammatory agents.

Bioflavonoids usually accompany vitamin C in foods and are found in citrus fruits and anything with beta carotene. Hayfever sufferers require greater amounts of bioflavonoids, so try and eat organic produce where the vitamin content will be higher.

Lemons are a good source of bioflavonoids, so they’re the perfect excuse to make fresh lemonade or maybe a lemon posset!

You’ll get the best results if you increase the anti-oxidants and bioflavonoids in your diet a month before your hayfever symptoms normally start until the season is over. That way, there is an optimal concentration of these nutrients in your body when you’re bombarded with your allergen.

According to a study in the Journal of Allergy and Clinical Immunology, people with high levels of folate in their blood are less likely to suffer from allergies. Examples of folate-rich food are turkey, chicken, lentils, chickpeas and spinach. Try Aldo Zilli's baked cod or Jo Pratt's chilli and chickpea bites.

Quercetin is a bioflavonoid found in certain purple or red fruits and veg, like apples, red cherries and garlic.

Its anti-oxidant properties inhibit the production and release of histamines, as well as help increase the production of white blood cells, which boost your immune system. You can also try Holland & Barrett Quercetin plus Vitamin C (£7.59 for 50 capsules) or Potters Antifect (84 tablets for £7.90).

However, two colourful foods to avoid if you’re prone to hayfever are the humble tomato and orange because they contain a histamine. Sadly, this also applies to red wine, to which I can personally attest to, as it makes my nose really stuffy afterwards during the summer months. You could try Mark hix's apple and cider pudding.

If you’re feeling bunged up, increase your bromelain intake. It’s an enzyme from a pineapple stem and helps reduce inflammation in your nasal passages and reduces the production of mucus. Eat some fresh sliced pineapple for breakfast or try Bromelain (£5.85 for 30 capsules). Top up your pineapple intake with Ching-He Huang's sweet and sour pork.

Ester-C is a safe form of high dosage vitamin C, which is a natural antihistamine, with the added benefit of boosting your immune system, so that it can ward off attacks. Eric Lanlard’s Orange Upside Down Sponge uses 4 oranges or you could try Ester-C (£17.55 for 100 vegicaps).

Stinging nettle isn’t as scary as it sounds! It’s a plant that’s been used for centuries by cultures around the world to treat nasal and respiratory problems. Ingesting the herb blocks chemicals called cytokines that trigger allergic symptoms.

You can boil dried leaves mixed with antiseptic Manuka honey or in a teabag, and it’s also available in tablet form. Try Swanson Superior Herb Stinging Nettles (120 capsules for £8.12).

Local honey can work wonders for some people. The belief is that honey produced locally contains the local pollens that aggravate your own hayfever. Therefore, when you eat the honey your immune system becomes better at dealing with the allergens.

Butterbur is a common European shrub, from which is extracted a substance called petasin. It was used by the ancient Greeks as a muscle relaxant and even used in the Middle Ages to treat the plague!

In 2003, the British Medical Journal published the results of a study by a team of Swiss scientists who found that petasin was as effective as man-made antihistamines for treating hayfever.

Petasin blocks leukotrienes and histamines, the two main hayfever nasties, without making you feel drowsy. While it’s not readily available in its raw state, the next best thing is Linpharma’s Butterbur Petasin (£26.99 for 50 capsules).

The root of the liquorice plant (sadly not the sweets!) is also effective in combating hayfever because it helps stop your annoying runny nose and itchy, watery eyes. Try Fushi’s Eyebright and Elderflower Herbal Health Drink (£19.36 for 230ml) – it also contains skullcap root (an anti-histamine) and eyebright.

Now, eating trees is right up there in getting back to your roots (no pun intended!).

But it’s not such a crazy idea because an extract of French maritime pine bark, called Pycnogenol, has been reported in the Journal of Phytotherapy Research to block 70% of incoming histamines from airborne allergens. Try Pharma Nord’s Pycnogenol (60 tablets for £10.85).

Making small modifications to your diet means summer doesn’t have to be hayfever hell for you this year.

The world's most expensive aphrodisiac

Are you lactose intolerant?