The last Sunday before Advent means it's time to stir-up your sweet festive treats. Read our guide for straightforward tips on how to make Christmas pudding and lip-smacking Christmas cake, excellent recipes to inspire you, plus advice on what to do with the leftovers.

How to make a Christmas pudding

Christmas pudding requires flour and breadcrumbs, and is meant to be dense, but if you want a slightly lighter texture, opt for self-raising flour over plain flour, or add baking powder.

As for liquids, puddings always contain eggs, but adding a drizzle of milk will make the texture slightly spongier too.

In terms of the alcohol, rum, brandy and whisky are classics. However, sherry, madeira and port make good lower alcohol content options, and stout will add a rich savoury flavour. Soak fruit in the alcohol overnight, then add them to the pudding, rather than pouring rum straight into the batter and hoping for the best.

Raisins, currants, sultanas, candied peel and glacé cherries add juiciness and robustness to the pudding, but dried apricot, grated apple, prunes, figs and blanched almonds often find their way in. Use what fruits and nuts you have available or like best. 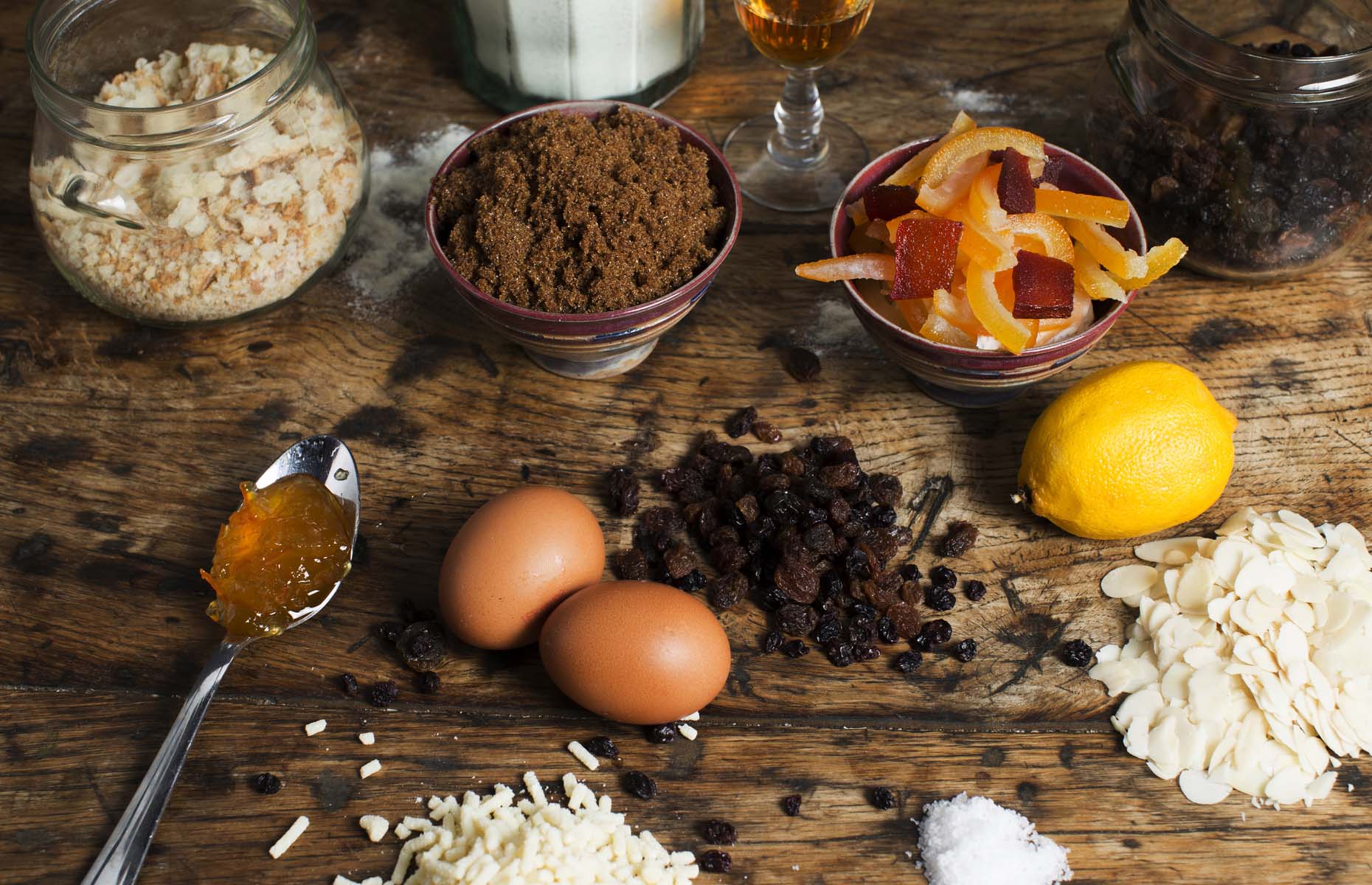 Mixed spice is usually used to give Christmas puddings its festive flavour, plus orange and lemon zest. Try experimenting with other combinations, for example cinnamon and cloves.

Even though fruit provides abundant sugar, you should add more to encourage caramelisation, whether that be dark muscovado, treacle, light sugar or golden syrup.

Christmas pudding is a rare opportunity to bake with suet, but if the thought makes you squeamish, butter is a good alternative and makes the pudding vegetarian friendly.

Don't use a food processor to make your pudding. The ingredients are easy to combine by hand, and shouldn't be stirred too vigorously. Plus you can't make a wish if you use a processor!

Use lidded plastic pudding basins so you don't have to faff around with a greaseproof paper lid, or worry about water getting into your pudding.

If you don't have a steamer, cook your pud in a saucepan by boiling water straight from the kettle around it, so that the water level reaches halfway up the basin. Keep the water at a gentle simmer throughout the cooking period. Steaming times vary from four hours to eight hours, so return every now and again to top up the water.

After your pudding has steamed, store it in a dark, cool place until Christmas Day. 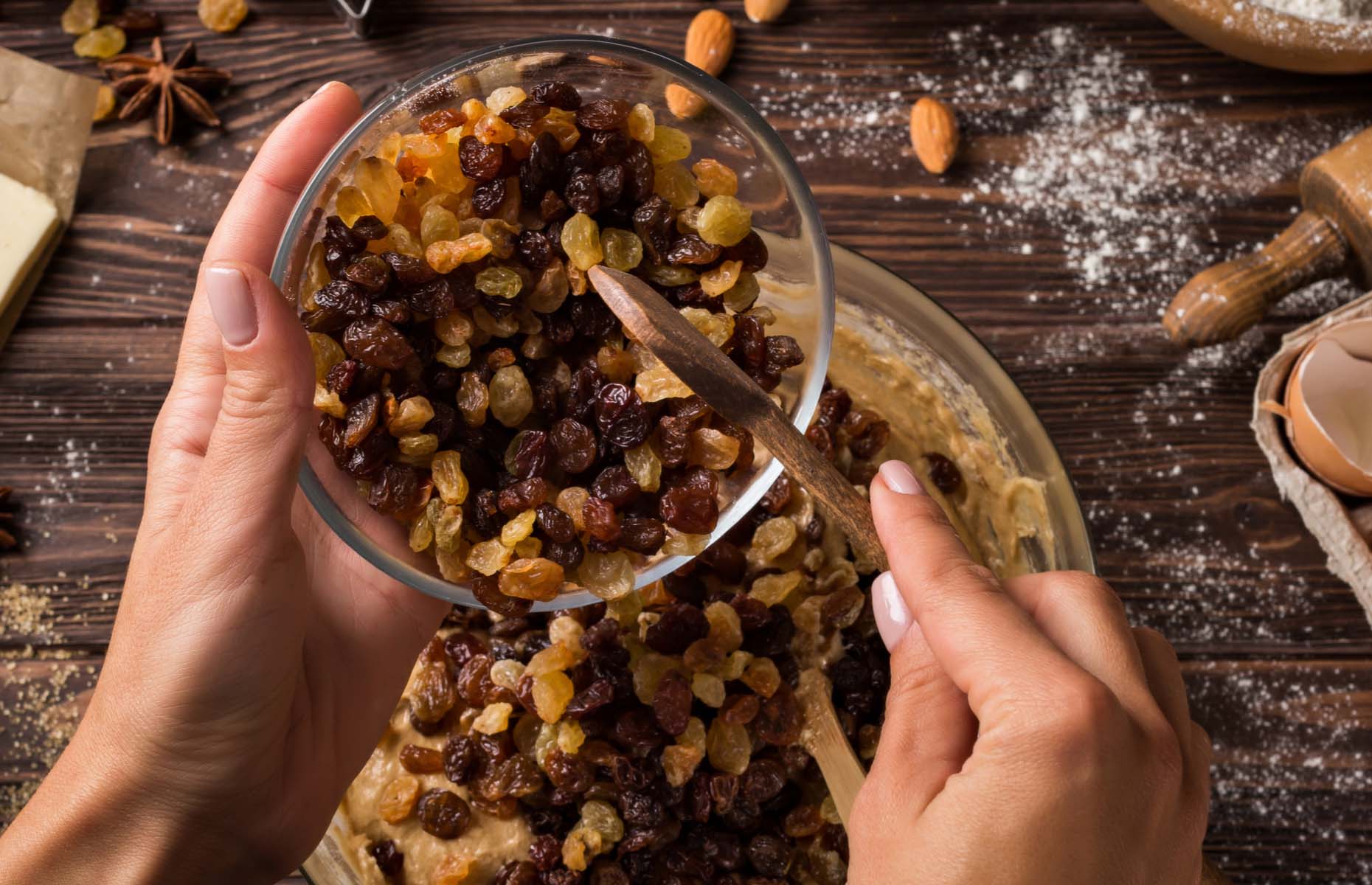 Ageing gives the flavours time to mature. Some people make their pudding even earlier than Stir-up Sunday to allow more time, however four weeks is fine. Christmas pudding doesn’t need as long to mature as Christmas cake.

It's not necessary to feed Christmas pudding as it will already be rich, with the fruits soaked in booze and the pudding doused again before setting alight. 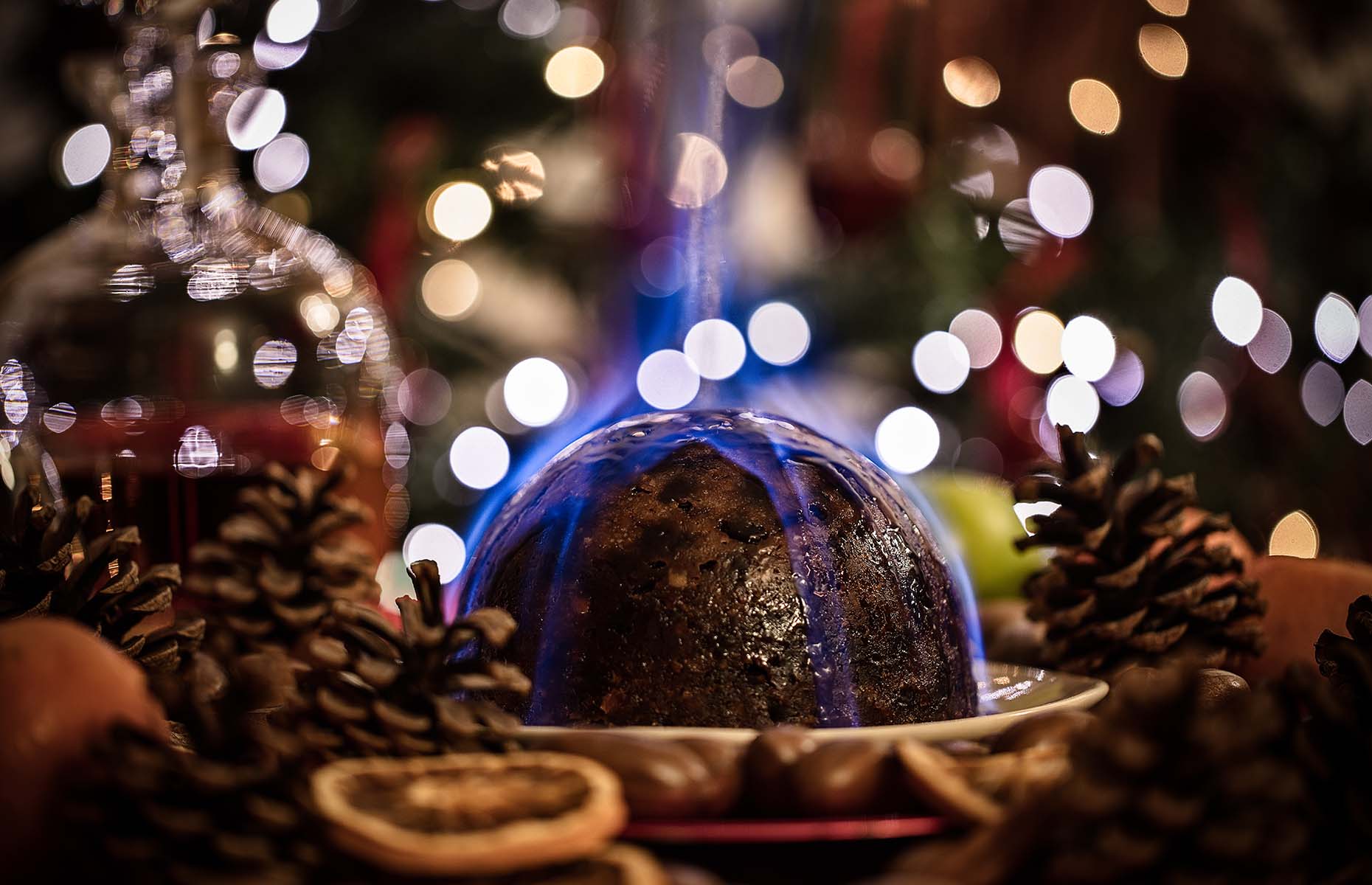 The best way to light your pudding

The key to successful ignition is to use high enough percentage alcohol (approximately 40%) and get the spirit really hot first.

Heat 2–3 tablespoons of brandy, rum or whisky in a saucepan (don’t let it boil) and then transfer to a long handled metal ladle. Make sure the steamed pudding is ready to serve and turned out on a serving plate with a large rim to catch the liquid.

Light the spirit by tilting the ladle slightly over the hob flame or using a match. Pour the lit spirit immediately over the pudding, take it to the table and wait for the flames to go out before serving.

How to make a Christmas cake

Christmas cakes contain much the same ingredients as Christmas pudding, but they’re a little less dense and of course they’re baked in the oven.

Traditional Christmas cakes are usually made a couple of months earlier than Christmas puddings as they really improve in flavour and richness with maturation and feeding. However, if you’ve left it until Stir-up Sunday, you can still get away with a pretty decent cake one month before Christmas. 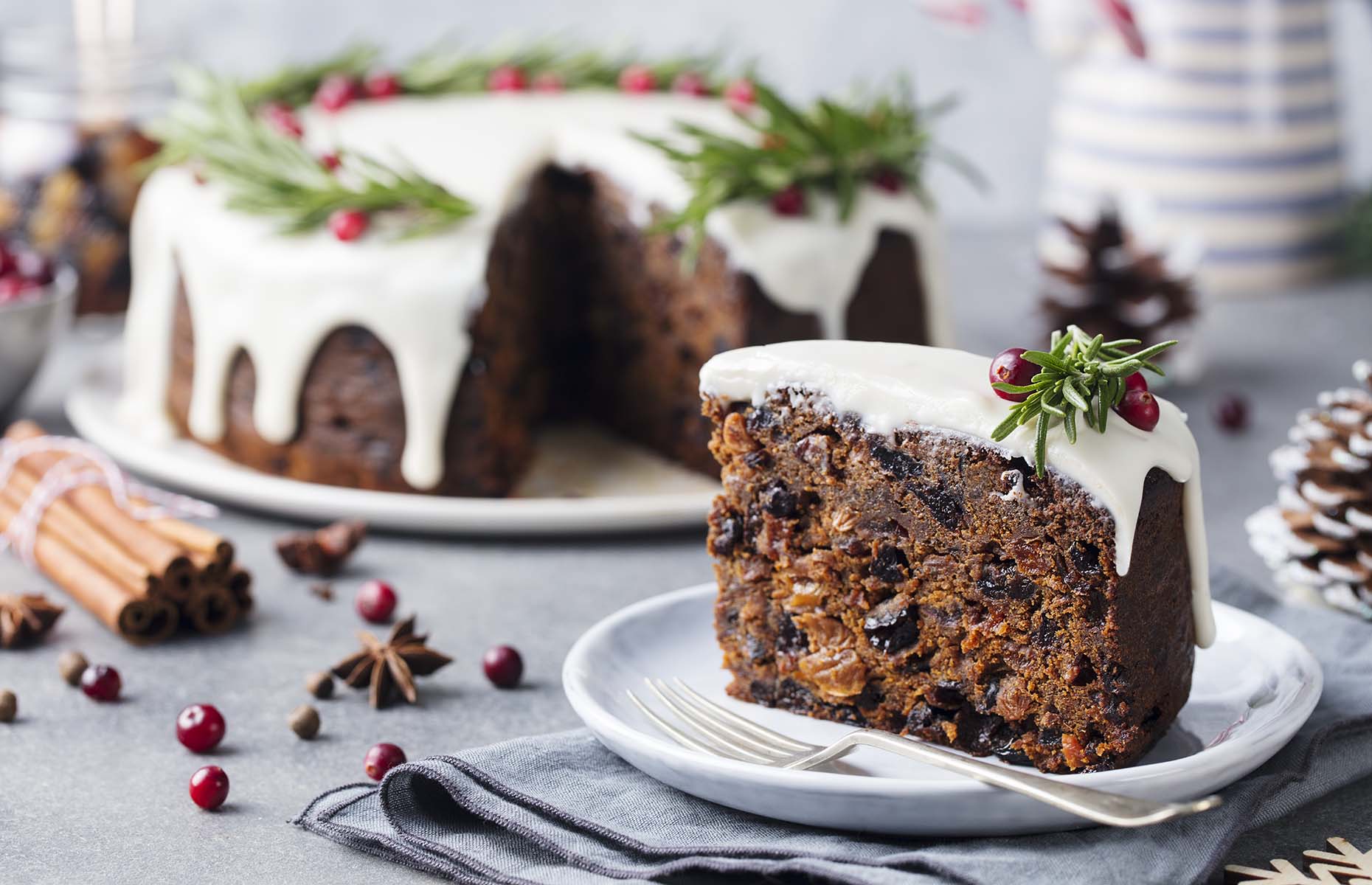 It's best to make Christmas cake early so there's time for the flavours to mix and mature. Ideally, it should also be fed with a little brandy or rum. Length of maturation and frequency of feeding is a matter of personal preference, but it stands to reason that the earlier you make it, the better it will be.

Brandy and rum are classic choices, but fortified wine with a long shelf life, such as marsala or madeira, are also good if you want something with lower percentage alcohol.

To feed the cake, poke holes in the top of the cake with a skewer and drop over one or two tablespoons of alcohol, weekly. Re-wrap the cake tightly after each feeding.

Who better to teach you how to make Christmas pudding than the queen of baking herself? Mary's Christmas pudding recipe calls for candied peel, almonds and plenty of dried fruit, plus a cheeky splash of rum or brandy. It keeps for up to three months and you need to steam it to reheat it on the big day. To top off the festive cheer, serve with a very generous dollop of brandy butter.

This Christmas pudding recipe is a classic, soaking fruit overnight in brandy, before combining with the flour, breadcrumbs, sugar, suet and spices, plus a grated apple for tang and moistness. The recipe also recommends a decent steaming time of four hours, however, the actual hands-on cooking time is kept to a minimum. The pudding will keep for two months and will improve over time. 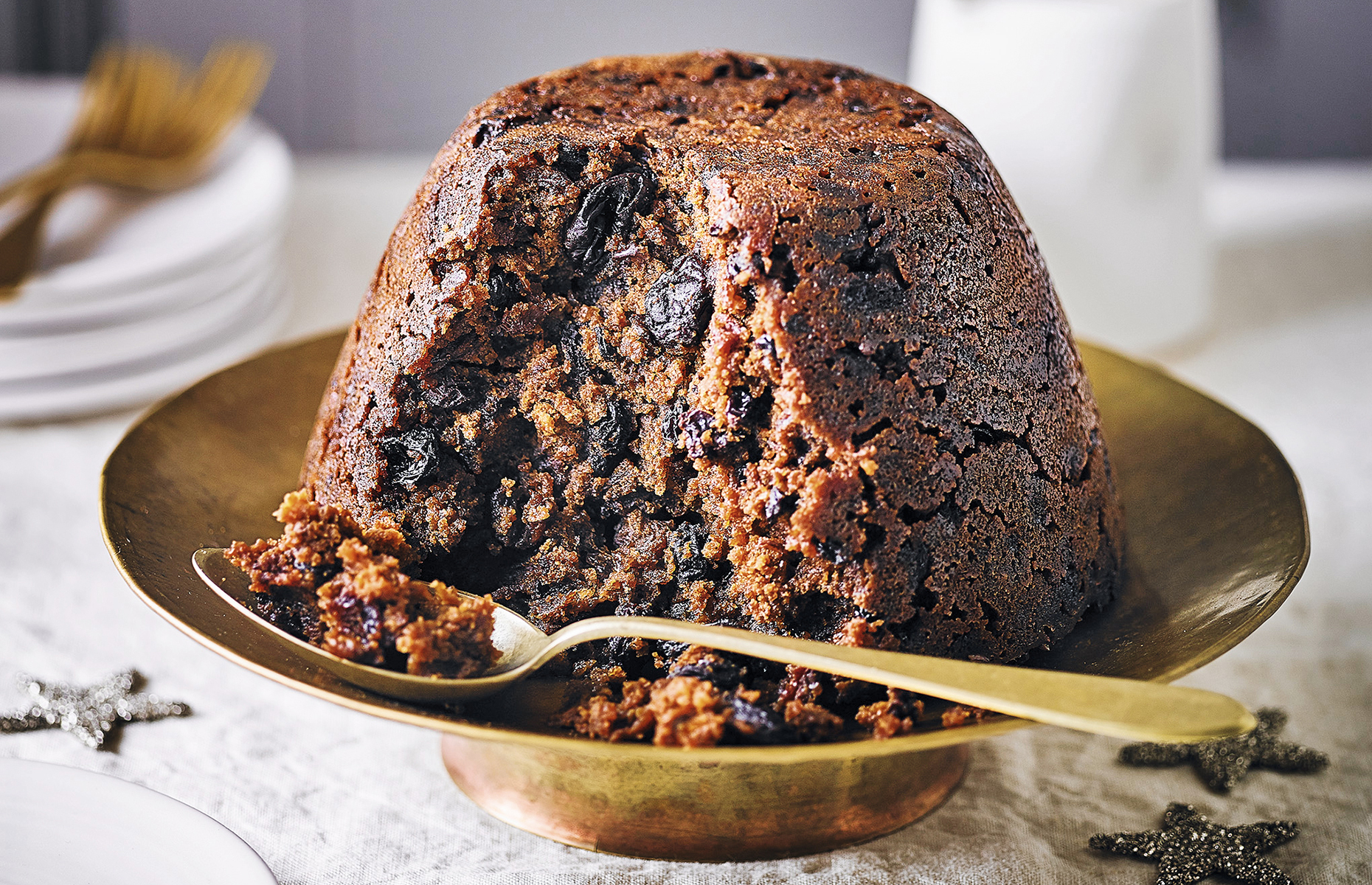 This fantastic showstopper cake incorporates all the classic Christmas cake ingredients and finishes it with marzipan and royal icing. The recipe calls to scorch the top before serving but you could finish with a spritz of edible gold spray and a scattering of sparkly edible snowflakes too. The cake will keep for up to three months and has to be fed with brandy every two weeks until Christmas for maximum flavour.

The strong fruit flavours go so well with the almond paste and sweet white icing in this fabulous Christmas cake recipe. The cake also keeps for months, so you can serve the slices whenever people drop by during the Christmas holidays. This recipe is a play on the classic, with the slightly spicy addition of crystallised ginger.

What to do with Christmas pudding and cake leftovers

Whether you're using up leftovers or just looking for a creative way to cook with Christmas pudding, this crumble will be a sure-fire success. It's also super quick to make and will taste great with custard or ice cream. 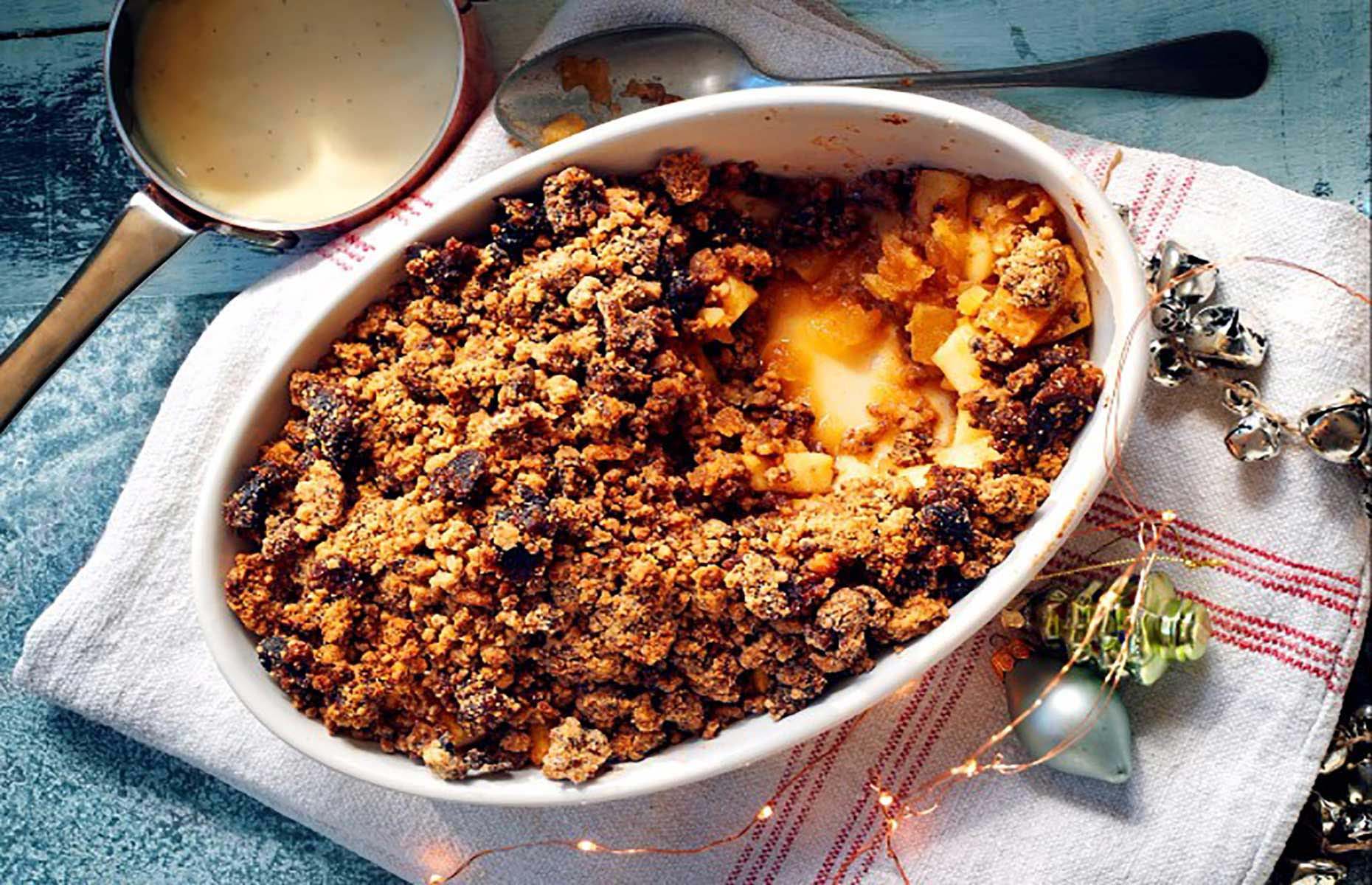 Christmas pudding cake pops are a really fun way to upcycle leftover Christmas pudding. All you need is a couple of bars of white and dark chocolate, plus some lollipop sticks. Decorate however you like, but if you happen to have edible glitter or icing, why not have a go and try turning them into Christmas baubles?

Christmas pudding ice cream is your most refreshing way to turn around leftover Christmas pudding and it's relatively simple. Start with homemade or shop-bought vanilla ice cream and blast it in the food processor with cut-up pieces of pudding. Scoop the ice cream mixture into a large bowl and freeze until you're ready to eat.

To serve, turn the pudding-shaped ice cream mound onto a plate and drizzle over melted chocolate.