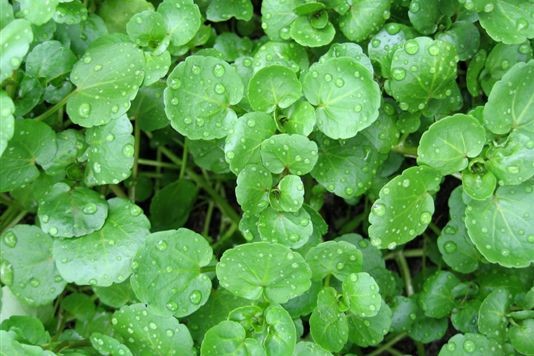 The UK produces some of the best watercress in the world and we've found out exactly where these delicious little leaves are coming from.

Not only is watercress choc a bloc with goodness but it packs a punch in the flavour department.  Its trademark peppery heat comes from the plant’s mustard oils which are released when chewed.  It more than holds its own against the big boys of the salad world and is tasty enough to serve as an accompaniment to a great piece of meat or fish.

In the wild, watercress was originally foraged from streams and ditches but it is now grown commercially in gravel beds and bathed in a gentle flow of pure spring water.  Sounds like a spa treatment – no wonder it tastes so good!

Sadly, in the UK, watercress only grows along the Dorset Chalk belts and in the neighbouring counties of Hampshire and Wiltshire.  This meant that, in 1865 The Watercress Line (a railway line) was built to transport watercress from Alresford in Hampshire to London, allowing watercress farmers to sell their heavily in-demand crops at Covent Garden.

Luckily we don’t have to rely on the train anymore and wherever you live in the UK you can dig into some wonderful watercress.  Here are some of the best watercress producers in the country:

If you like to trace where your food was grown, buy watercress from The Watercress Company, as you can use the product code to identify exactly where your watercress came from and which grower coaxed it lovingly into existence.

And if you fancy something a little, well, fancy, try the red watercress. It really brightens up a salad and adds a subtle pink tinge to soups.

“We really want to get people experimenting with watercress,” said spokesperson James Harper. “It’s not just something that can be sprinkled on the side of the dish. It also makes a great pesto, for example.”

Watch The Watercress Company in action on Countryfile.

Hairspring Watercress has been going strong since 1870.  The company grows its crop traditionally, cutting each bunch by hand, which allows more time for the mustard oils to develop -  giving its watercress more flavour.

“We get loads of people saying they’ve had our watercress and it’s really lovely and they want to know why supermarket watercress doesn’t taste as good,” spokesperson Ed Scales told us.

For over 50 years, Hairspring Watercress has been an Approved Grower under the NFU Watercress Association scheme.  They describe themselves as “good chaps” competing against the big boys of the watercress world who import a lot of their produce and don’t have the overheads that come with being an NFU approved producer.

So what makes a day breaking your back in the field worth it? “The best thing about being a watercress producer is the quality of life that comes with it.  Earning good money from watercress is hard - I don’t make the big bucks so I don’t need to worry about a lot of the things that come hand in hand with that.  I can just enjoy life!”

John Hurd and his family have been growing watercress for over 40 years at Hill Deverill in Wiltshire and, in an age where a lot of farms have mechanised, little has changed during that time at his farm.   “We’re still growing it the way we did in the 1950’s,” John Hurd told us.  Like at Hairspring, all the work is carried out by hand so they can allow the watercress to mature, which gives it a better flavour.

With lots of watercress farms buying plots overseas, John has stayed true to his British roots and only produces 100% organic, 100% British grown watercress.

John often appears at ‘meet the grower’ events staged by Waitrose, where 60% of his watercress ends up from March to November.  John counts himself lucky, only having to walk 60 yards to grab a handful of fresh watercress and has at least half a bunch a day to keep him going!

“It’s not an easy life being a watercress grower, you have to deal with everything nature throws at you.  On our packets of watercress you can send off for a free recipe book and often people include notes saying how much they enjoyed our product.  That’s really nice to hear and encourages us to keep going.”

The Lawes family have been growing watercress at Holwell in Dorset for over 40 years.  Sunsalads have expanded and branched out into the neighbouring counties of Wiltshire and Hampshire, making them the third largest watercress producer in the UK.

Sunsalad’s original farm is located on the site of the ancient Holy Well near Cranborne in Dorset, its healt- giving waters believed to have worked wonders in Roman times.  While they can’t guarantee to work miracles for your health, Sunsalad’s do promise delicious, springy bunches of watercress that taste fantastic.

“Continuity of supply and quality is really important to us as it working in harmony with the environment”, Simon Lawes told us.  “We also value the support of the community, whether it’s them helping with a tractor that won’t start or their understanding when we have to get out and work in the early hours of the morning!”

As with all produce, growing watercress is not without its problems.  “We are governed by the agricultural wages board which can throw up some difficulties, as can fuel costs and environmental legislation.  Weather plays a big part too, all this lovely sunshine at the moment has meant our old crop has bolted and turned to flower.

“Saying that, I like the fact that every day is different and it’s a unique industry to be involved in. The watercress community is centred around the same places and that is quite small, so we all know what one another are up to!”

Now is the perfect time to be experimenting with watercress, so grab a bunch and make it the star of your summery dishes!

What you should be eating now

The chilliest chilli farm in the world

Where to find the most delicious Easter Eggs