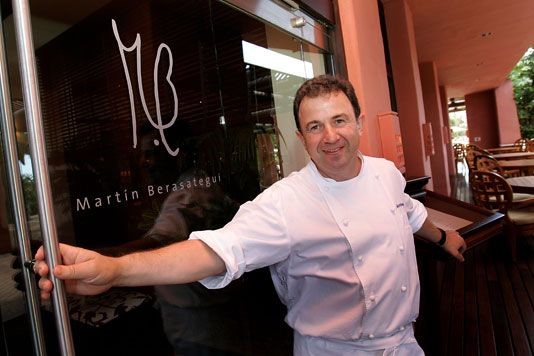 Priscilla Pollara talks to six-Michelin star winning chef Martin Berasategui about his favourite recipes and what inspires him.

In his own right, Berasategui is one of the most famous chefs in the world. Surprised to have never heard his name? Don't be. That's part of his charm.

For while he may indeed be the award-winning esteemed Spanish Michelin-starred chef who slaves day and night at the hot stove of his celebrated signature restaurant ‘Martin Berasategui' (as well as manage his nine-restaurant culinary empire), outside of Spain, he has shunned the fame bubble that has so enshrouded his Spanish culinary counterpart, molecular gastronomy supremo, Ferran Adria.

But surrounded as we are by celebrity chefs, TV chefs - and due to programs like Masterchef - reality trainee ones, too, it is somewhat refreshing that, aside from his food, little is known of the dexterous Basque-born Berasategui.

This is, however, not to take anything away from Martin'sartful mastery. Brought up by restaurant-owning parents, as a teenager Berasategui was either the kitchen help or being sent away to France to consolidate his early skills. By 20, he was to take over the restaurant that his parents had once run as the family business and at 25, won the eatery its first Michelin star.

The rest, as they say, is history.

Last year,he added to his impressive tally of six Michelin stars when his most recent project, the 'M.B' restaurant at the luxurious Abama Golf & Spa Resort in Tenerife, was awarded the accolade in the 2010 Michelin Guide. Not only does this venue come with a celebrated wine cellar of over 500 of some of the finest global labels, and offer diners amemorably traditional, if not innovativeculinary experience, but in M.B, Berasategui has further pushed the boundary of his versatility. As it stands, it is the only Michelin-starred restaurant in all the Canary Islands, and locals have found that his very presence has helped in slowly changing the negative reputation of Tenerife.

In a rare interview, Berasategui shares with lovefood.com readers some of his culinary secrets.

Why did you become a chef?

My parents ran Bodegon Alejandro, a restaurant that, in its day, was an institutionin San Sebastian, northern Spain.I started working there at the age of 14, cooking with my mother Gabriela and my aunt Maria, both fantastic cooks. By 17, a friend of my late father sent me to France to be trained in pastry cooking and other sorts of culinary disciplines.

From a young age, I lived and breathed cooking. It has always been my greatest passion, always in my blood.

I knew I wanted to be a chef from the very day I was able to start thinking for myself, nothing attracted nor fascinated me more. It was hard to convince my parents atfirst, who I think had dreamt of a different sort of life for me.

Tell us two of your favourite recipes?

My favourite recipes are probably the ones I last added to the menu of my restaurant Martin Berasategui. I feel great pride towards them, mainly because they took quite a lot of experimentation and hard work to get together. But when it comes to cooking at home or socially with friends, I quite like rustling up dishes that comprise of grilled fish and seafood.

What inspires you when you’re cooking?

I am personally very much inspired by my native land, the Basque region of Spain. I actually see a similar sort of inspiration in a lot of today’s cooking, which I feel has few boundaries. Chefs these days cook with personality and their food reflects the influence of their roots.

It is not a coincidence that Spain is well known for its food, here the quality and quantity of the produce and raw ingredients is such that it allows us all to cook fabulously. That said, I’m known to be a very curious person and I tend to find inspiration in many other things that interest me from around the globe. I’m always open to new experiences.

What’s the most important meal of the day?

In my opinion, they’re all important, but during the week, when I’m working in the restaurant, I sadly don’t really have time for any of them. The time I really enjoy them,however, is in those few and rare holidays and days off, when I enjoy cooking for my family and my friends. I suppose that’s when I give mealtimes my greatest attention, especially dinner.

Without a doubt it would have to be a very good kitchen knife. Perfectly sharpened, it’s the chef’s greatest ally.

If you could only take three food items to a desert island, what would they be and why?

A good olive oil – because anything doused in the golden liquid tastes better –and also bread and salt. While on the island, I would probably make sure I’d go looking for fish, meats, birds and fruits, but without oil, salt or bread, you wouldn’t really get very far.

What is your food philosophy?

Nothing is achieved without dedication, perserverance and passion.

What tips would you give to any chefs-to-be?

To never stop persevering, come rain or shine and continue to be inspired to invent new things.

If you could invite someone for dinner – living or dead – who would you invite and what would you cook?

I would love to be able to invite my father, whose premature death meant that he never got to see what I achieved. I would cook him what I know he would have liked kokotxas with cockles, for example, or perhaps just anything he would have most liked at that time. Actually, the moment would be so undoubtedly magical, that the food would be of very little importance.

What is the most exotic thing you have ever eaten?

Throughout my life and travels, I’ve eaten some really strange and interesting things, but among those that I can really say I’ve enjoyed was the swallows’ nest soup which I had once in Hong Kong. Surprisingly, it was very tasty.

Would there be a cuisine you’d favour above the rest?

Not really. I’m open to all sorts of cuisines from all around the world. Lots of different types of food inspire me – whether Chinese, Mexican, Italian or Japanese, etc. But I suppose if there’s a food that I really have a soft spot for, it would have to be that of the Basque region, that of my own land. There’s nothing quite as delicate and tasty anywhere else in the world.

Also worth of your attention:

Brian Turner on getting it perfect

What Tom Aikens fantasises about