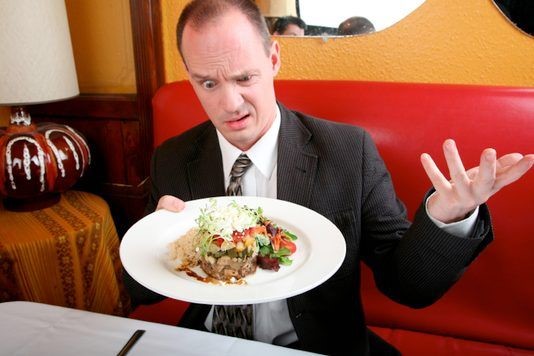 Restaurants can be havens away from home. But what happens when it all goes wrong?

Eating out at a restaurant has innumerable advantages. There’s the promise of discovering a potentially genius culinary marriage you would never have otherwise attempted at home, plus the bonus of having someone else do everything while you fill the minutes of your wait by imbibing large glasses of red wine.

Ultimately, restaurants exist so that we can be treated. But then, it’s not always so straightforward. For when an experience proves to be less-than-satisfactory, the effort placed in journeying to a restaurant, finding it, paying for it, can so easily disappear in one frustrating click of the fingers. A wailing child, a hair in a plate, the interminable wait for a hot-but-now-stone-cold soup and the bill listing one too many portions of whitebait you simply did not order. Being shown to a table by a grin-less waitress facing a terribly unscenic ‘Toilets This Way’ sign is equally jarring, as is discovering someone has double-booked your reservation. Restaurant disasters are common, and regretfully, there are many more examples able to test one’s patience. These are my five pet-hates.

You arrive with a stomach so empty, your hunger is audible to all the other diners. A waiter places a bread basket on the table, and quite naturally, you begin to make your way through the selection, spreading thick swipes of butter inside the rolls as you go. It’s only later you realise that the basket has been charged to your bill. What, didn’t you see the price tag hidden underneath? These days, I feel forced to ask whether unordered items arriving at the table are gratis, or not – no matter how mortifying the question. More often than not, the quality of the first arrival is rather poor and nothing more than a stop-gap – but would I have tucked in knowing I’d have to pay for the displeasure? Not really.

To notice a wobbly table, is to notice how often one places their elbows on the table. But a lop-sided, rattling table can cause other – more annoying - issues. Spilt drinks, sudden jolts leaving cutlery in the air and coffee cups emptying their contents into the saucer, among various other things. Do you look for a wedge of napkins and begin the tedious task of coming up from underneath the table to check whether the correct balance has been reached? Or do you ask to have all your plates, coats and glasses painstakingly moved to another spot (once you’ve located the missing waitress)? A less-than-stable dining surface certainly makes for a less-than-satisfactory meal.

Once you’ve seen it, it’s hard to continue eating from the dish – even if the offending addition has been successfully removed. It’s a universal problem: the thought of your freshly-prepared plate of food carrying an alien object, potentially picked up anywhere between the kitchen worktop and your table, is enough to make anyone want to gag.

Could the eyelash or long, straggly hair have come from your blinking eye or head? Of course. But knowing as much won’t hinder you from darting daggers at the waitress and the visible kitchen staff on whom you blame everything.

After all, the customer’s always right. Right?

I cannot stand seeing someone’s finished plate be cleared away while their dining companion is still half way through their, say, pumpkin risotto. It’s the quickest way into making someone feel rushed and as though their chewing is under intense scrutiny. It also goes against all acceptable polite etiquette.

So why does it happen? I asked an offending waiter at a branch of Pitcher and Piano just the other week, “We like to have as many washing loads full at any one time,” came her response. Missed the point entirely, I thought. True, not everyone is born with the impeccable know-how of the catering world, but sometimes a lack of intelligence can be alarmingly frustrating. I really despair when table-servers appear to have no or next-to-no knowledge of what is on the menu in the restaurant in which they work, or seem at all interested in taking care of an ingredient-swap you have requested. I was once reprimanded at a café in the city of York, when I asked for a ‘Parma Ham and Cheese’ focaccia sandwich. “You mean Palma?” came the blood-boiling reply. Yes, Palma.

The night had started well. In front of me, the waiter from my local Indian restaurant had brought us a spread including a lamb dopiaza, a beef Madras, and mounds of pilaf rice.The appetising nature of the meal, however, came to an abrupt end when ‘Money, Money, Money’, came ringing out of a nearby speaker with a backing jingle that belonged unmistakeably to the Swedish pop band, Abba. It was unwanted, loud and played on a loop. Worse still, what has electro-pop have to do with the smells of Indian cuisine?

Deathly silence feels clinical and sterile. But sometimes, no music is preferable. It’s hard to be enticed by tear-jerkers in Thai restaurants, Westlife’s early records in Chinese joints and operatic arias in characteristically-themed Italian enotecas, and more.

Has music ever ruined your meal? Do you have any restaurant bug-bears?

And since we’re on the subject of restaurant etiquette….

Side Dishes are a con

To tip or not to tip?

Should restaurants increase the amount of food on your plate?