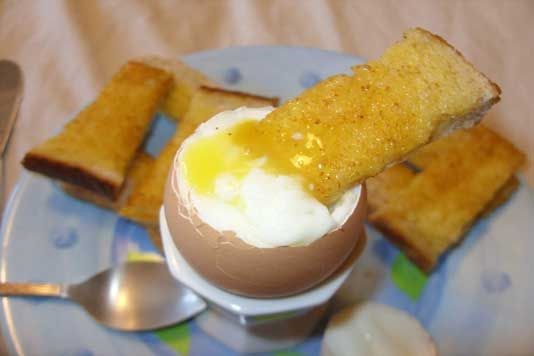 Another entry for our `How to cook like Heston' challenge (where you can win a tour of Heston's lab!) as Jenny gets all eggscited.

I have a long-standing passion for the humble egg. Heston Blumenthal's method of boiling an egg, however, is somewhat different to the norm. He recommends that you place the room temperature eggs in the smallest pan available and only add enough cold water to cover them.

Then you put the lid on the pan and place over the highest heat possible. When the water comes to the boil, you remove the pan from the heat and wait for six minutes.

After the time has elapsed, you remove the lid and carefully remove each egg.

By all accounts, this method of cooking an egg will result in a less rubbery, more tender egg white - and a beautifully soft yolk - owing to the gentleness with which it has been cooked.

Ever the optimist and ever keen to improve my own techniques, this just had to be tested.

All I can say is that Heston's cooker must be a darned sight better at getting the water to boil than mine is, because my first attempt was solidly hard boiled. It was edible, however I couldn't detect any difference in the egg white.

Never one to give up after a first attempt, I left my second egg for just five minutes, instead of the recommended six.

Aha! This produced a fairly soft yolk - one which wouldn't have been out of place inside a Scotch Egg, but not really dipping material. The jury is out in terms of the texture of the egg white, as we couldn't really tell any difference.

The third and final attempt was left for four and a half minutes, which produced the perfect dippable yolk inside soft egg white. I have got to admit, however, that I am still not seeing the promised difference in texture where the white is concerned.

If there is one, it has to be so minimal that as an egg lover - and as such, I really don't mind how my eggs arrive - it is "beyond my ken", as they say in Scotland.  They do say that, don't they?

Getting into a scramble

Having conquered the Heston boiled egg, I then turned my attention to the interesting method he employed for cooking scrambled eggs.

Heston (as one would expect) totally pushes the boat out on the indulgence side of things, using butter, whole milk and double cream - then finishing off with brown butter and sherry vinegar.

I, however, erring on the side of weight-gain caution, just went for the butter.

Heston's method involves placing a bowl above a saucepan of simmering water, then melting the butter and adding the lightly beaten eggs.

As with the boiled egg method, this method is all about being gentle and not scaring the egg into tightening up and becoming tough, but warming it through gently and cajoling it into forming a scramble.  So don't - for a second - think this is going to be done swiftly. I would recommend you grab a chair.

Make sure you have your toast ready for the moment when the egg finally submits to the heat and, with an almost audible sigh, scrambles. You don't want to have to leave it congealing in its bowl, while you rush around toasting bread.

The end result - placed on top of some delicious homemade, toasted soda bread - is so deliciously creamy that it truly is the definition of the word unctuous. Far better than the dictionary definition, that of "having an oily or soapy feel".

To my mind, the milk and cream just aren't necessary as the egg itself forms so beautifully smoothly that the creaminess is all there.  Mind you, as I say, I didn't try the eggs with the cream - maybe it'd pass from sublime to 'totally off the scale'.  Hmmmn, maybe I'll give it a go, the next time I've some cream sitting looking for a home to go to!

Want to join in?

Thank you Jenny. If you want to join in and potentially win a tour of Heston's lab!, just register with lovefood, pick a recipe from the show, attempt it properly, and let us know how you got on by sending some pics and a few hundred words by email to contactus@lovefood.com

Our standard competition terms are here. You must be a registered user of lovefood.com to enter. The editor's decision is final. Closing date is 15th February.