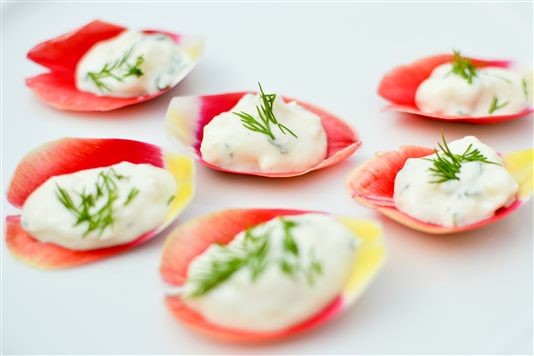 Flowers have been used for centuries to flavour every day dishes and add the wow factor to plate decoration. Urvashi Roe traces their use across the globe from days of old to modern cuisine.

In days gone by, flowers were better known for consumption than presents. Many varieties are edible and have been used for medicinal, nutritional or even symbolic purposes by cultures around the world – starting with the Chinese Emperors and Persian nobility…

Chrysanthemums originated in China around 200 BC where they were first cultivated as a herb. The Imperial Palaces of China were known to serve wine made from chrysanthemums as it signified integrity and nobility. The Empress Wu Zetian ordered her maids to collect hundreds of chrysanthemum flowers to make a rice based cake called ‘Bai Hua Gao’ to serve at palace banquets, and that may have led to their generic use and popularity among local womenfolk. Ancient cookbooks such as ‘Shan Jia Qing Gong’ by Lin Hong written in the Song Dynasty (960-1279 AD) house15 flower recipes.

In the seventeenth century, the Dutch brought them to Europe where they were cultivated for ornamental use. But they soon found their way into cuisine again in eighteenth century Britain. Hilda Leyel, founder of The Society of Herbalists, revived the use of flowers in her book The Gentle Art of Cookery.  This included a very simple Chrysanthemum salad where whole flower heads are blanched and then tossed with potatoes, artichokes, capers and shrimps.

The Chinese still use the whole head in soups and stews to add peppery flavour – they are added at the end of cooking so they keep their shape.

References to Dandelions used as food date back to The Old Testament:

Dandelions are abundant across Europe and the Greeks would use the whole head raw in salads or boil them in stews. In Britain, you’ll see dandelions in every field. They are considered to be a pest and a nuisance by most, but in medieval times they were collected by the community in spring and aged over the summer to make sweet wine. It was thought to be a magical process with fairies involved – how else would the bitter taste turn sweet?

Jekka McVicar of Jekka’s Herb Farm cites a recipe for Dandelion Wine in her book Cooking with Flowers using modern measures not too dissimilar in proportions to those in Hilda Leyel’s book. Nettles, marigolds and daisies could be substituted for the dandelions.

Of course not all flowers were eaten whole – sometimes only the petals were used.

The Chinese, Greeks, Romans and Persians all used rose, jasmine, geranium, hibiscus and lily to scent perfumed oils and medicinal waters to mask the odours of drinking water or add natural sweetness. The technique was developed in Persia where the petals were steamed to extract the perfumed oil. The water was actually a by-product. This method spread to India and Arabia and then to Europe via the Bulgarian Rose Valleys, which today produces 85% of the world’s rose oil.

You can make your own simple rose tea by boiling a handful of fresh rose petals and a teaspoon of white tea leaves to a cup of water for 5 minutes. The same process works for honeysuckle, geraniums and jasmine tea, but use an extra handful of petals for these as the flavours are not as strong.

Tulip, rose and chrysanthemum flower petals were also used by the Persians, Romans and Greeks to decorate their lavish banquets. The poet Horace references their use in his odes and satires. It was a symbol of pleasure but also purity and therefore used in religious ceremonies such as weddings and funerals alike.

Modern day compotes, jellies and candied flowers can be traced back to the Stuarts when the English, Dutch and French established sugar colonies in the Caribbean. The sugar was harvested into syrup form and then shipped back and refined into moulds. The wealthy were becoming accustomed to sugar in their food and the first cookery writers were referencing recipes for such treats. Hannah Glasse references waters, candied flowers and jellies in her books The Art of Cooking and The Complete Confectioner.

Using fresh flowers in everyday cooking is back in vogue.  The recession has brought foraging back and we’ve seen edible flowers on TV as chefs like Marcus Wareing encourage us to present Michelin star like works of art, and Masterchef contestants strive for impactful presentation

Grow your own, forage or buy online

If you’re keen to try out this most natural of ingredients, it is possible to grow your own edible flowers – all of the above are easy to grow in the smallest of gardens. Plant organic varieties to mitigate harmful effects from pesticides.  These are available at many nationwide nurseries if you ask or you can buy online.

Foraging can be a great way to source your flowers for cooking.  Read this short Code of Conduct from the Botanical Society of the British Isles before you go out and about.

Buying cut flowers is probably the easiest route to get started.  There are many mail order companies who supply restaurants with seasonal edible flowers. Go with Scotherbs and Firstleaf for these. If you’d prefer to try the jellied or syrup forms first, try Womersley Foods, The East India Company and Cream Supplies.

Two simple recipes to get you started

The world’s most expensive food