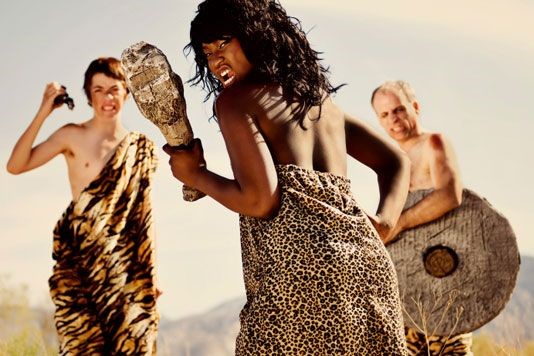 Sam Bilton recently abandoned cappuccinos to try the Paleo diet, but dairy products were not the only things she gave up.

For decades interest in the Caveman or Paleo diet has simmered gently along side other trendy eating plans. We’ve had the Cabbage Soup Diet, The Maple Syrup Diet and more recently the OMG diet. All of these I have dismissed as gimmicky, quick fixes. But I kept hearing murmurings that the Paleo diet really worked and so decided to give it a go for a month.

What is the Paleo Diet?

The theories behind the Caveman or Paleolithic diet were initially published by Walter L. Voegtlin in 1975. More recently it has been championed by Loren Cordain who says we are “stone agers living the space age”. Like Voegtlin, Cordain believes our physiology hasn’t changed in 40,000 years when we were hunter-gatherers living off a diet of wild fruits and vegetables and lean meat. Paleolithic man didn’t eat dairy products, cereals and grains, salt or refined sugar (these being products of farming societies).

Like the Atkins diet the Paleo regime does minimise carbohydrate consumption. However, Cordain claims modern low carbohydrate diets are really high fat diets containing moderate rates of protein. What the Paleo diet strives to do is encourage the consumption of monounsaturated fats and omega 3 polyunsaturated fats found in fish oils. Unlike Atkins processed meats such as ham and sausages are banned from the Paleo diet because of the fat content and the preservatives they contain. Pulses, such as beans, lentils and chickpeas are also off the menu.

So what can you eat? Well a lot of meat (ideally organic and lean) for a start. In the Paleo Cookbook Cordain says “hunter gatherer typically ate the entire animal - brains, eyeballs, tongue, marrow, liver, kidneys, intestines and gonads”.  I did try bone marrow in a restaurant during the diet but draw the line at eating brains and testicles. Eggs are also OK as are most vegetables (with the exception of potatoes and sweetcorn). Fruit (fresh and dried) and nuts and seeds are allowed in moderate quantities particularly if you are trying to lose weight.

Breakfast has always been something I can juggle between morning chores - yoghurt and fruit or perhaps a slice of toast. This would change on the Paleo diet. Eggs were the natural choice mostly scrambled or poached but never soft boiled (let’s face it - a soft boiled egg without soldiers simply isn’t right). Initially, I worried this increased egg consumption would send my cholesterol through the roof. But, evidently there is no recommended limit on the number of eggs you should consume per day.

With a more substantial breakfast I found the mid morning munchies banished. Lunch and dinner consisted of meat or fish with vegetables or salad. By increasing the quantity and variety of vegetables on my plate I didn’t notice the absence of rice, pasta or potatoes. Even though I seemed to have even larger platefuls of food I never felt stuffed.

How much is too much protein?

My biggest problem was the amount of meat I had started to consume. I began to feel like I was being engulfed in sea of flesh. The Department of Health recommends that we eat no more than 70g of red or processed meat per day. Clearly this is a paltry amount if you are following a diet which recommends you consume animal protein at every meal.

So am I ready to eat like a caveman forever?

With a reduced carbohydrate intake I thought I would feel more lethargic. However, I found myself with more energy throughout the day and sleeping better at night. I’m convinced this is partly due to eating a larger, protein based breakfast and have resolved to continue doing this. I was also eating a lot more veg to bulk out my meals which kept hunger at bay. Any snacks I consumed were healthy (like Nak’d bars) compared to the cakes and biscuits I would previously have indulged in.

My aim in the experiment wasn’t to lose weight so I still ate fruit although I did knock alcohol on the head and continued to exercise. I lost 7lbs over the course of the month which was a welcome bonus considering I never felt hungry during that time.

My biggest issue with the Paleo diet is the cost. Eating organic is expensive particularly if you have meat or fish twice a day. Then there is the argument that our growing dependence on meat is have a brutal effect on the world’s climate. It is believed by cutting our meat consumption we could do more for the climate than giving up our cars or plane journeys.

The Paleo diet wasn’t as austere as I feared it would be. It is relatively easy to follow so long as you have the time and money to invest in it and there are physical benefits. Can I imagine a world without bread, cheese or cappuccinos? Absolutely not!

Have you tried a new diet regime?  How did it work for you? Let us know in the comments box below.