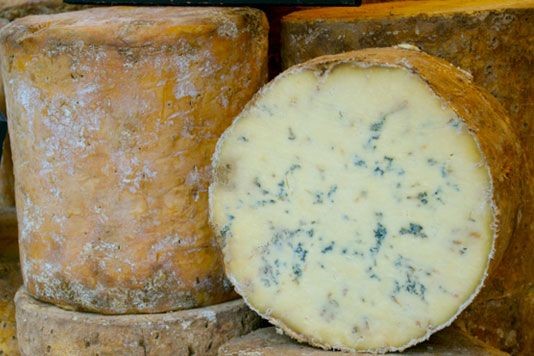 A giant marquee plonked in the middle of the Cheshire countryside, sheltering just shy of 4,000 cheeses inside it. This is not something we get to see every day.

The legacy of Nantwich

The International Cheese Awards at Nantwich has been celebrating cheese from around the world for over a century and, after waiting patiently for 115 years, team lovefood was finally invited to help judge the competition.

It was the lovely folk at the British Cheese Board who swung us a judging spot, so I went along in the hopes that a British cheese would be crowned Supreme Champion; just like last year, when a Wookey Hole Cave Aged Cheddar won. But 2012 boasted a record 600 cheese makers and 3,927 cheeses from as far afield as China exhibiting – stiff competition for the Big Cheese title.

I was one of 156 judges (restaurant critic Charles Campion and Corrie star-turned-cheese maker Sean Wilson were among my peers), and after dressing up in oversized cheese coats we were herded into groups of two or three. Food journo/Guilde des Fromagers member Jenny Deeprose and cheese grader for Barber’s farmhouse cheddar Tony Ball were to be my companions, and together we would judge three categories: the standard blue stilton (open to producers who are making less than 1,000 tonnes annually); the UK blue vein cheese; and soft or cream cheese without additives. It was going to be a fatty day.

How to taste cheese

Alas I spent the first half hour wondering around the 70,000 sq ft tent like a little lost lamb, and so missed judging the standard blue stiltons, of which there were only three entries. But I soon latched onto a very tall and very kind camera man, who craned his neck over the sea of white coats to spot the blue cheese table. Jenny, Tony, and 39 lethal-looking cheeses were waiting for me there (here we all are, in the photo).

So, what makes an award-winning cheese? “Well, we spend the whole time waiting for a cheese with the wow factor,” said Jenny, who kindly adopted me as her cheese-tasting apprentice for the day. “And I’m afraid it’s no use just judging a cheese by its taste; factors such as look, shape, and, in the case of blue cheese, how well the blue veins are dispersed are also important. Generally speaking, the closer the veins are to the rind, the better.”

Here are the four simple steps to cheese-tasting that Jenny and Tony taught me:

1. Always smell the cheese before you taste it.

2. Take only a little chunk so you don’t fill up too soon.

3. Rub the cheese between your thumb and finger before eating, both to warm it up (cold cheese tastes of nothing) and to assess its creaminess.

4. Cleanse your palate in between cheeses with either water or an apple.

…follow the above, and you should be able to identify all sorts of differences in a batch of the same kind of cheese.

39 blue cheeses to try, all available to buy from supermarkets… you’d expect most of them to taste the same, right? Well, they couldn’t have been more different.

We spat four out (one smelt of baby sick, and the other three Jenny nicknamed the ‘bitter blues’); winced at the extreme saltiness of at least five; marvelled at the incredible creaminess of entries #23 and #8; sighed over the lack of character for an otherwise perfect #2; criticised the crumbliness of #6; and ate half of #22 in one go, amazed as we were by its slightly sweet, walnutty personality.

It was at cheese #25 (this was a blind taste test, hence the numbers) when my belly began to gurgle in protest. But persist we did, and after going back to our favourites at the end, we settled on that walnutty #22 for the number one spot (pictured above), followed by #30, and #1. Or in English (the results of all 300-odd groups were tacked onto a giant pinboard after lunch), that’s gold for Marks & Spencer, silver for The Co-Op Group, and bronze for Aldi Weber Shandwick.

Hair of the dog

Imagine eating all that fromage, then gorging yourself with cream cheese straight after. Yes, it was tough. Especially because one of them tasted like feet, and another was so sloppy that it wouldn’t stay on our spoons. The delicate citrus notes of #1 came out on top, giving the gold to… Dairygold Food Ingredients UK. Delamere Dairy came second, and Langage Farm LLP got bronze. And what of the stiltons which I accidentally missed the judging of? Both gold and silver went to Cropwell Bishop Creamery in Nottingham – a great victory for British cheese.

But there can only be one ‘Supreme Champion’ – and that went to a German Montagnolo Affine (later described by Jenny as "a delightful soft blue with creamy balance and wonderful taste") produced by Kaserei Champignon, who picked up their shiny cup the next morning. You can buy the winning cheese from Morrisons supermarket. Runner up (or ‘Reserve Supreme Champion’) went to the same Wookey Hole Cave Aged Cheddar that got gold last year.

I caught up with Mike Pullin from Ashley Chase Estate Ltd (makers of the Wookey Hole cheddar): “It’s a great feeling to be a British champion for two years in a row. We’re really pleased. With nearly 4,000 cheeses here, it’s good to know you’re doing something right! If you’re going to win an award anywhere, this is the place to do it!”

We at lovefood are big fans of British cheese (did you know that there are over 700 types of cheese produced in the UK?) and would implore you all to learn a little bit more about it at the British Cheese Board website. There’s even a cheese flavour map to play around with!

What’s your favourite cheese? And do you think you could eat as much of it as I did? Check out all our photos in the top box above, and talk to us in the comments box below…