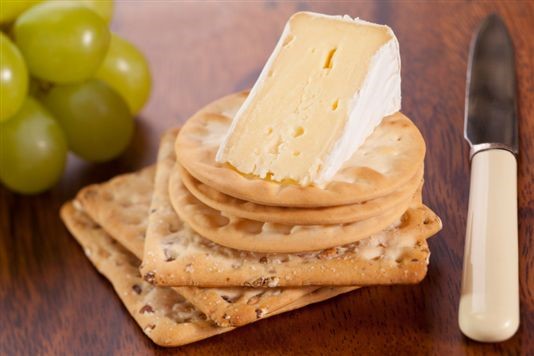 Cheese without its biscuit is like an actor without a stage. Give your fromage a friend with one of our top five biscuits for cheese producers. Famous for selling wedding cakes made entirely out of cheese, The Fine Cheese Co in Bath was suddenly struck by a thought not so very long ago. It went something along the lines of: “If celery is a natural partner for blue cheese, and walnuts for goats’ cheese, why can’t you put the celery or the walnuts in a cracker to partner cheese?” A series of flavoured crackers was born, including fragrant and mellow basil crackers for Swiss cheese, clean-tasting celery crackers for blue cheese, and fennel crackers with soft aniseed warmth for pungent cheese.

Each one comes in a crisp white box, and all the crackers are sugar free. There are also two other ranges: the ‘vintage boxes’ (a mix of oat and wheat, with a touch of sweetness), and the ‘coloured boxes’ (all-butter neutral-tasting biscuits – “because some people like their cheese naked”).

We’re talking here about Scottish oatcakes – not Staffordshire oatcakes, a pancake-like snack usually filled with meat and/or cheese. Scottish oatcakes are made from oatmeal and sometimes flour as well, and the texture may vary from rough to fine depending on how the oats are ground.

Nairn’s, who are based in Edinburgh, have been baking oatcakes since 1888 and only use wholegrain oats grown in the nearby Scottish border, where the climate is perfect for slowly ripening the grains. They’re firm believers in the health properties of an oatcake – indeed, oats are high in fibre and contain complex carbohydrates which sustain and slowly release energy.

Our favourite is their rough oatcakes, which are just 45 calories each and provide the earthy anchor needed for a strong blue cheese. Alternatively, try their herb and pumpkin seed oatcakes, flavoured with a blend of rosemary, thyme and parsley. They’re tasty enough to eat on their own with a thin lick of butter, but would also go well with mature cheddar.

It’s a controversial one… should we be eating digestive biscuits, usually reserved for dunking in tea, with cheese? There’s a certain snobbery surrounding the idea. You’ll won't always find digestives on a restaurant cheese board, but secretly we’ve all dabbled in the cheese ‘n' McVitie’s combo. lovefood is in the ‘love it’ camp, which is why we’re recommending Miller’s Stones – a crunchy, crumbly digestive biscuit available in wheat (smooth and crunchy), or oat and wheat (more knobbly) varieties.

Sweet and all-butter, they're made to be eaten with cheeses such as cheddar and Stilton. The biscuit is modelled on a grinding stone for flour, with raised surfaces and ridges, and looks “kinda groovy”, according to the people who make it – a long-standing family bakery in the Derbyshire Peak District.

Thin, crispy crackers, baked golden brown – Carr’s Table Water Crackers are an absolute must for the cheese board. Sporting as they do a completely neutral flavour, they’re perfect for just about any cheese under the sun and are made only from wheat flour, salt, and a little oil.

The story of Carr’s Biscuits began during the British Industrial Revolution, when Jonathan Carr formed a small bakery in Carlisle in 1831. Ten years later it was granted Queen Victoria’s Royal Warrant – one that it still has to this day.

The rich savoury taste of Carr’s poppy and sesame crackers matches mature cheddars, and their roasted garlic and herbs option is asking for a slab of brie or goats' cheese on top. Beware the Carr’s cheese melts though – once you pop, you won’t be able to stop.

Fudges was founded by Percy Fudge in Dorset in 1926. Three generations down the line, Steve, Sue and Graham Fudge are still working hard to preserve his legacy, adapting Percy’s award-winning savoury and sweet biscuits to suit today’s discerning tastes.

There are eight biscuits for cheese options, and among our favourites are the rosemary flavour (delicate, buttery, and floral, providing the perfect partner for a fresh and creamy goats’ cheese); the striking charcoal crackers, which go well with a warm, melted Brie; and their oat and walnut crackers, which match a mature farmhouse cheddar, with chunky pickle on the side.

Impressively, Fudges biscuits scooped 10 gold stars at this year’s Great Taste Awards, including three for their cheddar wafers, and one for their duo pack of oat and walnut crackers and charcoal crackers.

And one more for luck… Peter’s Yard

It was our Scandinavian expert Signe Johansen who recommended Peter’s Yard to us, a coffee house in Edinburgh which started out as a small bakery in the Swedish countryside. Their crispbread (a delicacy which the Swedes have been eating for centuries) is made to a traditional Swedish recipe and uses only the best natural ingredients, including Shipton Mill rye and whole wheat flour. Sourdough, fresh milk and honey are the other essentials.

Peter’s Yard crispbread is still made by hand (quite unusual in an age where most crispbread is made on an industrial basis) and depends on the slow and natural fermentation process of sourdough. The result is light, crispy and neutral, making it a great alternative base for cheese. Peter’s Yard have plenty of recipes on their website (we like the sound of a beetroot, feta and walnut topping), and you can buy the crispbread throughout the UK and Ireland.

Eating for gold at the world's biggest cheese awards