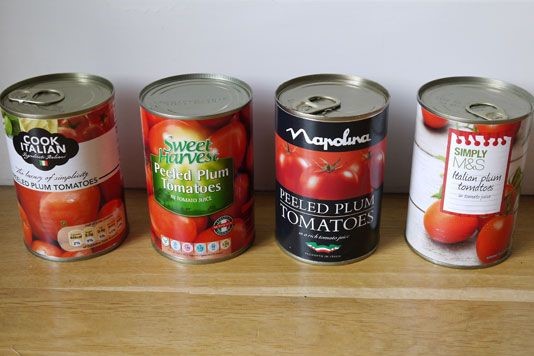 If you're chucking a can of tinned tomatoes into a spag bol, is there any real justification for spending over £1 a can? Laura Rowe finds out.

Tinned tomatoes are a store cupboard staple of mine. I have to have at least five cans in my cupboard at all times or I get into a mild panic. They come in handy for so many meals, after all. There’s the favourites, of course, like spaghetti bolognese, chilli con carne and tomato sauce, but there are also all manner of curries, tagines and stews. But all of these recipes require slow cooking so does buying budget really make any difference?

Here's what goes inside a typical can.

Unlike some of the other products I’ve looked at in this series, the difference in packaging between big brand and budget tins is negligible. All four cans can be recycled and use colour-printed paper labels. The two branded cans have a pull-ring, as does the much cheaper Simply M&S can. So what do they contain?

For the purpose of this article I concentrated on tinned whole plum tomatoes (although it is worth noting that many of the tins of ‘chopped tomatoes’ contain the round variety, with a higher water content than plum). You might think that given the cheapest (Aldi) are a quarter of the price of the most expensive (Napolina) they might be a quarter of the quality. But you’d be wrong...

First of all I looked at what was inside the cans. Simply M&S contained five whole plum tomatoes and 75ml of a thick tomato juice. The tomatoes were a combination of plum varieties including Docet, Taylor, Ercole, Talent, Discovery and Ulisse. These, I am told, are grown in Puglia, Italy. While they are meant to be peeled, there was the occasional rogue bit of skin, some had broken slightly in the can, but other than that they were pretty consistent in size and had a lovely, sweet flavour.

Aldi Sweet Harvest had six whole tomatoes, which are apparently the Roma variety of plum (widely considered to be the best) and grown in Italy. These varied wildly in size, many were broken, and they were bound in 125ml of thick juice but they still had a good amount of flavour. And for only 31p a can, are you really that bothered about a few split tomatoes?

Cook Italian also uses tomatoes grown from Southern Italy in Puglia. Its can had the biggest bounty, with seven whole tomatoes and 80ml of juice. They were the most perfect in condition, all whole with only a slight bit of skin on one of the tomatoes, and had a great sweet flavour. The company couldn’t specify which type of plum tomatoes are used, only to say that there is a variety.

Napolina, surprisingly, had only five tomatoes and a whopping 175ml of juice. Its tomatoes are grown in Foggia in Southern Italy but it couldn’t tell me which variety, just that a mixture of plum and round are used. There was very little spare skin and the tomatoes were deliciously sweet and flavourful. All of the cans included citric acid, which is naturally occurring in tomatoes anyway, and is used to control Ph levels. Interestingly though, the two budget cans by Aldi and M&S contain 0.10g of salt per 100g, compared to only trace levels in the branded cans.

So where are the savings made?

All of these tomatoes are plum, all are grown in Italy, and all are canned with tomato juice and no artificial additives or preservatives. So why is there such a big difference in cost then?

Is it the way the product is brought over here perhaps? Do the cheaper tins use evil air freight? M&S doesn’t – it packs its tomatoes into cans in Italy and then ships them here. It says its savings have been made through acquisition of the factory in which the product is produced, allowing for cheaper costs. Cook Italian also packs in Italy and then ships and says that its price is “in line with the market for a premium quality ring-pull canned tomato”. Napolina says its price point (the most expensive in this comparison) is down to “quality”, and it too packs in Italy and then ships its products to Liverpool. Aldi unfortunately wasn’t able to tell me anything about how it makes its savings or how its tomatoes are brought over to the UK.

Do you buy branded or budget when it comes to tomatoes? And what do you do with them? Tell us in the Comments box below.

Recipes that use tomatoes