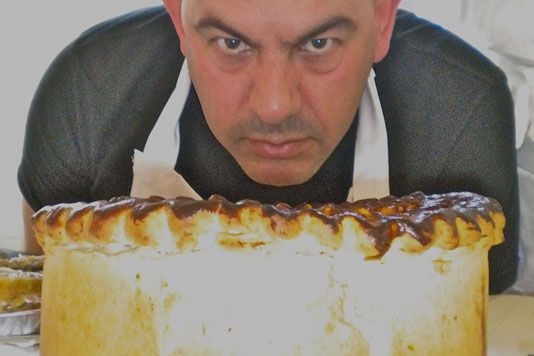 There is much to admire about the current UK food scene. But there's still plenty to stick in Simon Majumdar's craw.

There are plenty of things I love about food in Britain today. I love the fact that restaurants are rightly becoming less apologetic about our classic national dishes, and bringing them to the forefront of modern menus. I applaud the transformation of street food from a hobby for upper middle class kids with trust funds to burn into a genuine movement to feed the lunchtime masses. And I stand up and shout from the rooftops about how London has the best cocktail bar selection on the planet, bar none.

I’ve long been quoted as saying that you are as likely to find olives and street performers at UK farmers’ markets as you are decent food, and unfortunately that still seems to be the case. That’s not to say that farmers' markets are inherently a bad thing; just that there are far too many of them, and not enough really great producers in Britain to fill them up. Every place with a crossroads seems determined to have their own little weekly event, even if it means they have to plump out the meager offerings of farmers with stalls selling pasties, and people wanting money for standing still while painted in silver. Proof, if it were needed, that Britain’s culinary renaissance still has a long way to go.

They all have them now; ranges of premium foods that proclaim themselves “Finest”, “Taste The Difference”, “Simply The Best”, “Bloody Awesome” (Ok, I made that last one up) in an attempt to get you to fork out an extra few quid for something that is often only marginally better than the ordinary examples on offer. While some of these products might be worth the extra spend, it’s the marketing that really irks. It often makes you feel that not spending £15 on a ready-made lasagna makes you one step away from walking around with a bulldog on a string

I have never quite understood the need to play music in restaurants. Either the volume is so low that it's pointless, or so loud that it makes conversation - surely a major part of any dining experience - nigh on impossible. Requests to turn the volume down are often greeted with contemptuous refusal, and one recent occasion was accompanied with an explanation that it “helps keep the staff’s energy levels up”. Good for them; the moment they are paying for my meal, I shall be happy for them to be a priority. In the meantime, the sound of knife against plate and the chatter of people having a good time should be soundtrack enough for any meal.

Pop up restaurants suck. They have always been a lousy idea, combining as they do shambolic, unpractised service and a limited menu of dishes that can be composed rather than cooked to order, so that no chefs are likely to raise a sweat in the preparation of your supper. They are even more likely to disappoint now that superstars are being brought over to the UK to prepare meals that will set you back the price of a small hatchback to sample a feeble echo of what made the chefs famous in their home country. If you can’t get a reservation at The French Laundry, just accept it as God’s way of telling you that you are not meant to eat Thomas Keller’s food.

Most people agree that bacon is rather wonderful and you won’t hear any argument from me. I love the stuff so much that I have even started to make it at home. However, you can take a good thing too far, and in recent months I have been exposed to people using bacon in ways that the good Lord never intended.  Bacon covered in chocolate and caramel, candied bacon, bacon flavoured ice cream, and even bacon used in cocktails. It’s all getting out of hand and my cry now, to all chefs and cookbook authors, is that bacon has been nigh on perfect since man first learned how to cure meat. It doesn’t need you to stuff it in a doughnut to make it better.

When I go out for dinner, I want to know that there's a reasonable chance that I will be able to eat what I want, where I want, and at a time that suits me. Now, with the plethora of no reservation restaurants that seem to be opening up all over London, dinner is increasingly becoming a bit of a lottery. You are either faced with arriving hideously early, or braving a slow-moving line as you wait your turn to claim a coveted spot, usually at a communal table. I am long past the age where queuing for my dinner is an acceptable option, so have scratched all no reservation places from my list of potential dining spots. The young folks don’t seem to mind, however.

Who was it that decided all male bartenders (oops, sorry; 'mixologists') in London now have to sport sideburns before they are able to mix me a Martini? I am not sure if it's related to the current rather daft hipster look for which, thankfully, I am about 25 years too old, but it looks bloody ridiculous and, when added to other affectations like pin striped waistcoats, makes me irritated enough to want to see them publicly drowned in a vat of their house made bitters.

We have enough UK food to be proud of to make the current energetic urge to ape New York both unseemly and unnecessary. Nowhere is this more obvious than with the current obsession with who makes “London’s Best Burger?”, accompanied by regular squealing tweets proclaiming the latest contender. I did foolishly become embroiled in the conversation myself on occasion, but of course have long since realised that the real response to such a question is, “who the hell cares?”

Much as I love real truffles, I detest truffle oil, most examples of which are very nasty indeed. Most of all, I despair about the almost insatiable desire of otherwise competent chefs to pour this disgusting slop over ingredients that have never done them any harm. Mac ‘n Cheese is a particular bug bear, but I am saving a very hot place in Hell for the person who first decided to add truffle oil to deep fried potatoes. For the love of all that is holy, please stop it.

Given the scale of some of the problems facing mankind, the fact that many restaurant websites expect you to download a PDF version of their menus if you want to read them may seem like a minor gripe. But it is one of the things that ticks me off the most when I am doing research, or trying to figure out where to have dinner. Doing a recent computer clear out, I found nearly a hundred assorted menus in my download file (better than porn I guess), but it shows that most restaurants are still way behind other industries when it comes to the website world. From now on restaurant owners, if I have to download your menu to read it, you are off the list.

Now that I've got all that off my chest, I want to know what food issues get you hot under the collar. Tell us in the comments box below...

Gold Marmite - love it or hate it?

'British' asparagus in Jamie's Italian restaurant is apparently from Peru