Like the rest of us, farm manager Tim Pratt stores onions in a cool, dark, dry place... it just happens to be an old WWII aircraft hanger in Suffolk.

Take down one of your cookery books from the shelf, pick a savoury recipe at random, and chances are it begins ‘first chop one onion’. Yet onions rarely get star billing themselves, with perhaps the exception of French onion soup and onion bhajis.

Of course onions turn up everywhere; the ‘umble allium is the backbone of many of the world’s best loved dishes, from meat pies to paella, Bolognese to balti.

And what about seasonality? The brown onion sits ever ready on supermarket shelves all year round. It’s there for the stuffing on Christmas Day, and there for a burger hot off the barbecue in summer. Yet onions do have a season, and September is traditionally the time to harvest them.

One for all and all for one! 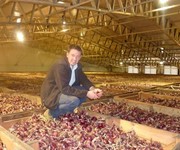 Tim Pratt is the farm manager for 3Ms Group, a farmers’ co-operative that came together over a decade ago after realising they could work more effectively together. “The name comes from the Three Musketeers,” he laughs “and we’ve now got six members, but the name’s stuck. It probably came about like names do one night down the pub”. The farms now total about 7000 acres of the East Anglian countryside, growing not only onions but other root vegetables too. However what makes them interesting is not so much their crops, but where they store them. 3M make clever use of an old Airforce base. 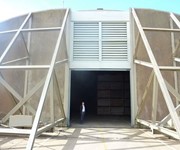 RAF Bentwaters (map) was used by the RAF during WWII and by the USAF during the Cold War as a base for fighter jets designed to meet the Soviet threat. With the end of the Cold War the base was sold off, and is now home to a variety of industries as well as our onion farmers.

It’s used as a film set, and ironically was given a Russian makeover for the filming of the C4 series Space Cadets. “Yeah that was quite funny, we had to put Russian number plates on our vehicles,” says Tim. There’s also a fully working training Spitfire (ML407 owned by Carolyn Grace) and lucky old me got to see it roar into the sky. The sound is like nothing I’ve every heard before: a deep throaty almost analogue sound, compared to the constant woosh of a jet engine.

From bombs to onions 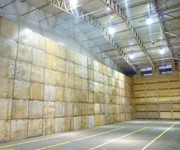 There are two types of hanger that 3M use. The arched bomb stores - “three metre thick walls make great insulation," says Tim - and the T2 type which would have housed aircraft. Tim and I climb a flight of stairs and walk out onto the boxes of onions. I’m actually standing on 1.2 ton boxes packed six boxes high - that’s a lot of onions! But then we eat a lot of onions in the UK, around 450,000 tonnes a year.

This year’s weather conditions have played havoc with the onion harvest. The wet start to the year meant that many of the sets didn’t really start growing until later in the year. The water didn’t help either, creating the perfect conditions for mildew and other diseases. ‘They’re quite hard to grow are onions,” says Tim. The result is that much of the crop this year is on the small side. 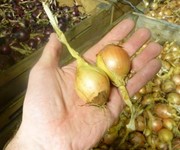 As we head back to the farm office, Tim and I reflect on what’s needed to secure onion production in the UK. "One problem is the Dutch; they’ve got such good growing conditions that they can flood the market." Another problem is that onions are rarely advertised or promoted, and they have none of the ‘chefy’ glamour of shallots, nor the fervent patriotism and short season that English asparagus enjoys. But as the writer Elizabeth Robins Pennell said of them, "banish the onion from the kitchen and pleasure flies with it."

The best way to chop an onion