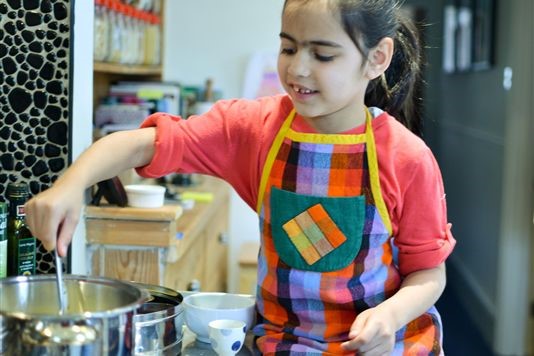 It's not easy getting children to try new food. But if you're bored of the same types of family meals, simply spiced curries could be just what you need.

Despite the fact that curry has been around in the UK since the mid-to late eighteenth century, it’s still something children find new and different. Scary, even, because of the chillies often used in restaurants and takeaways. However, with the right preparation and planning you can make even the fussiest eater into a curry connoisseur.

Preparation from an early age

If you are a curry fan, start training your children when they aren’t even walking. Indian families introduce their children to spices very early on. My daughters, now aged nine and seven, were eating simple vegetable-based curries from around eight months old.

The easiest spice to introduce first is turmeric. It has a mild flavour but a whole load of antioxidants and nutritional properties. You can put it into baby rice, vegetable purees or soups, for example. Then slowly move on to quarter teaspoons of coriander powder, crushed cumin or mustard seeds, and finally just a pinch of chilli powder.

My advice would be to introduce them one at a time, so that you can keep track of any adverse reactions easily.

Get hands on with toddlers

All children are different, but toddler age was really when my daughters started to help prepare food. When children become interested in finger foods is a brilliant time to introduce chapattis and let them make their own.

Give them some dough and a little rolling pin. Let them copy you and have some fun. It’s important to eat the ones they have made as well as your own. Thick or thin, it doesn’t matter. It’s about making them feel confident in eating their own food.

Primary school years are the best time to get children using spices and becoming familiar with the different tastes. They will be learning about different cultures at school, so pester teachers for schedules so you can forward plan.

There are lots of Indian supermarkets across the country now where you can go and explore. Try these ideas I used with my daughters:

-       Create Bingo cards for the different spices and ingredients you need for a recipe as you go around the store.

-       Use word searches to help them become familiar with the unusual names.

-       Do blindfolded tasting games to see if they recognise the tastes independently from each other.

It’s all about having fun and playing games to set the scene.

Get kitted out and let the magic begin

There are so many mini baking sets, mini cookie sets and so on. Indian cooking doesn’t have many special utensils but a little ‘masala tin’ and some ‘balti dishes’ of their own might encourage your children to get started. Begin with vegetables they like and then introduce new ones slowly. A simply spiced potato curry is a good starting point.

My daughters each have their own spice mixes now. We call them ‘Amber magic’ or ‘Amy magic’. It’s their own magical blend which transforms their chopped vegetables into Indian food. They mix them up in a little bowl before we start cooking and give them a stir to get the magic started.

My girls very rarely refuse to eat something they have cooked. If you have fussy eaters though, think about the presentation. Annabel Karmel has some great ideas for food parcels or food faces. My most innovative creation was a curry volcano hidden in an inverted ice cream cone surrounded by a sea of rice! I used their toy dinosaurs to break the volcano top and gave them little egg spoons to scoop the curry out.

However awful, it is important to eat what they’ve cooked and make sure you’ve included some cooling fruit desserts, yoghurt or ice cream at the end of the meal.

Two simple recipes to start with

Here are two quick and easy step by step recipes my daughters cook almost on their own.

Why not listen to Amy's potato curry recipe with your kids? Just click on the 'play' button: