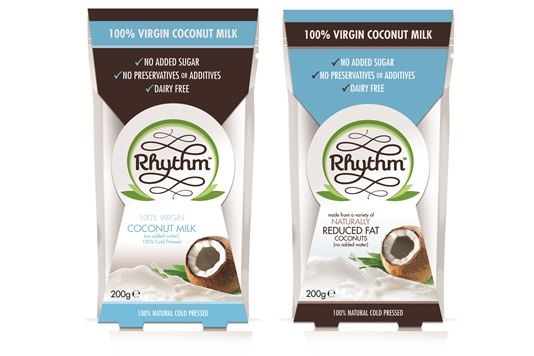 Is a new raw coconut milk superior to canned? Lovefood finds out.

A new product launched by Rhythm Health purports to bring the purest flavour of coconut to household cooking. We've trialled it against the canned competition to see if that claim holds up.

The new pair of virgin coconut milk products, available in full or reduced fat versions, are created by pressing the mature flesh of coconuts just once, which are then packed without adding any other ingredients. Rhythm say that as their milks are cold-pressed, they remain raw and nutritious. However, since coconut milk is used in cooking more than it is consumed on its own, I'm not sure how much the second half of that statement holds up.

But how does it taste?

What does the office think?

I whipped up a couple of Thai green curries in the lovefood kitchen and invited anyone peckish along to see which they preferred – a curry made with canned milk, or one made with Rhythm.

Both curries had identical ingredients, were cooked for the same amount of time, and I didn’t reveal the difference between the bowls before the test.

The majority of people said they preferred the Rhythm-based curry, saying that it was creamier and smoother, and had a fruitier flavour – though a couple of people disagreed, and one person said that they couldn’t tell the difference at all.

If you're after a Thai green curry recipe, try this out

What do I think?

Personally, I was impressed by the richness and creaminess of Rhythm, especially when I compared it to the canned version. It goes great with granola too.

While Rhythm’s milks might seem expensive at £2.99 for a 200g pouch, I think this one is worth the dough.

Coconut milk is easily obtainable at around £2 for a 400ml can, but what is actually in the can is reconstituted extract bulked out with water. You can find it cheaper than that, but generally the less you pay, the higher the water content (though that's not always true if you shop around or buy in bulk).

So I actually think Rhythm is reasonably priced for what it is.

Would you try out Rhythm? What's your favourite recipe that uses coconut milk? Talk to us in the Comments below.