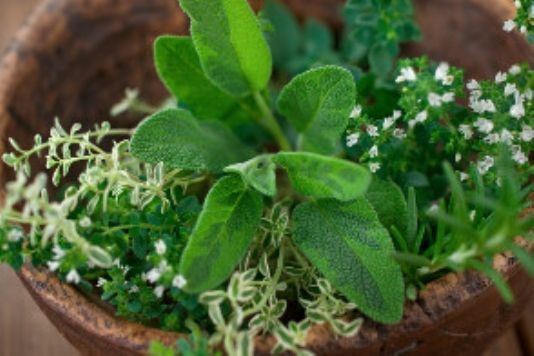 Parsley and chervil look mighty similar. And what should you cook with oregano? Time to swot up with our culinary herb guide.

A hardy member of the mint family, oregano has a warm, aromatic scent and robust taste.

Eat with: Simply sprinkle into a homemade tomato sauce at the end of its cooking time, or use it to season your soups, stews, meat pies, pasta sauces, and shellfish.

Try it in this olives marinated with oregano and chillies recipe

This bright green herb is often used as a garnish, which is a shame because it has a good flavour and shouldn’t just be used as a sprig of decoration. Flat leaf parsley has become popular in recent years, while traditional curly parsley has fallen out of favour.

Try it in this chorizo, clam and parsley broth recipe

Sage is a traditional accompaniment to onions and a key flavour in stuffing. It's easy to grow, and has been used for centuries as a medicine.

Eat with: The leaves can be dipped in egg, breadcrumbed, and then deep fried as a canapé to serve with drinks. It's also wonderful roasted with a glug of oil and cubes of butternut squash.

Try it in this squash, sage and goats' cheese risotto recipe

Another member of the mint family, thyme has very small, green-grey leaves. It's an aromatic herb with a sweet, earthy flavour.

Eat with: stews, marinades, sprinkled it over omelettes... you'll also find it in the jerk seasonings of the Caribbean.

Try it in this venison stew with cheddar dumplings recipe

Eat with: The young leaves are a salad herb and taste good with watercress. As for the seeds, use them as a spice in curries, pickles and chutneys. It can also help fend off a common cold, apparently.

Try it in this tandoori gobi masala recipe

Found in many Asian cuisines, as well as those of South America. If you can get hold of the roots they’re even better as they have a stronger flavour. In cooking, use right at the last minute to preserve its flavour. Oddly it’s one of the few herbs that people really seem to hate – there’s even a Facebook group about it.

Eat with: Carrots, of course, as well as white flaky fish such as cod, mushrooms, chilli, lime.

Try it in this cod, coriander, tomato and garlic parcels recipe

It looks like a more petite version of flatleaf parsley (it has to be one of the prettiest plants in the herb bed), and tastes mildly of aniseed.

Eat with: Chuck into any scrambled or baked egg dish, and serve with fish, soups, and butter sauces. You’ll often find it nestled lightly on top of restaurant dishes too.

Try it in this spring vegetable tarte fine recipe

Like many ‘hard herbs’, rosemary is easy to grow and resistant to bad weather. It's also the herb of remembrance.

Eat with: No leg of lamb is complete without some sprigs of rosemary. But this wonderful herb (actually a member of the mint family) has other uses too, including sweet ones. It's also a great herb to scatter over a just-lit barbecue, to improve the smell.

Try it in this honey and rosemary popcorn flapjacks recipe

A fresh, citrusy flavour, similar to oregano. Indeed, it is called oregano in the USA, and the two are often confused. It is said to be ‘the meat herb’, but in actual fact it compliments all foods apart from desserts. While excellent fresh, it has the best taste and greatest pungency when dried.

Eat with: Add marjoram at the end of cooking, because it’s too delicate to take long periods of heat. Eat with pork, or use in stuffing for poultry, dumplings, and herb scones or breads.

Also known as love parsley, lovage is a hardy perennial herb with ribbed stalks similar to celery. The flavour is like parsley and celery combined with a hint of aniseed and curry - you can use the leaves as a punchy substitute for both parsley and celery.

Eat with: The leaves can be used fresh in salads, soups, stews, stir-fries, potato dishes, and squash, and have even been used to make tea and wine. Tarragon has a subtle and sophisticated flavour (almost anise-like), and is an essential herb in French cuisine. It's quite peppery with a slight hint of vinegar.

Eat with: Snip into mayo with lemon zest for a tangy spread, or use in egg dishes, poached fish, mushrooms and other vegetables.

Try it in this chicken, tarragon and wholegrain mustard gnocchi recipe

Bay is one of few herbs which most cooks prefer using dried over fresh. It's a basic ingredient of ‘bouquet garni’.

Eat with: Flavour soups and stews with whole leaves, add a couple to marinades, stock, pâtés, stews, and curries. When poaching fish, add a bay leaf to the water.

Try it in this barbecued stuffed trout recipe

Borage is a culinary herb popular in Central Europe. It has a light, cucumber fragrance.

Eat with: Borage is often chucked in salads prepared from raw vegetables, and is also found in soups. It’s a favourite herb for flavouring summer drinks, and the blue and occasionally pink delicate flowers are edible.

Try it in this mozzarella, cherries and prosciutto salad recipe

The light aroma of dill faintly resembles a concoction of liquorice, fennel, anise and celery. The seeds are stronger and more flavoursome than the leaves.

Eat with: Use with soups and omelettes, seafood, salmon, potato salads, and steamed vegetables. Dill seeds can be added whole to pickles, stews, and hearty soups.

Try it in this salmon with dill and mustard recipe

Lemongrass, as the name suggests, has a subtle lemony flavour that is excellent in south-east Asian cooking, and used a lot in Thai recipes.

Eat with: Lemongrass is great in Asian curries, whether bashed and bruised while whole, sliced, or ground up in curry pastes.

Try it in this Thai pork and lime stir fry recipe

Chives can be found across the globe in many climates and have a distinct fresh but tangy flavour. A small member of the onion family, chives are good used in many cuisines.

Eat with: Use chopped up in omelettes, scatter on savoury pancakes and tarts or mix into vegetable soup.

Try it in this mushroom and goat's cheese tortilla recipe

You'll never mistake the scent of mint. It has a strong flavour when eaten as a leaf, and can be used in cooking to add real strength of flavour to meat dishes, most commonly lamb.

Eat with: roast lamb either as leaves or as mint sauce, or torn up in salads, or with new potatoes.

Try it in this rack of lamb with minted peas recipe

Lavender can be overly fragrant and destroy all the subtlety of a dish. However, used sparingly it can bring floral scents to complement both meats and vegetables.

Eat with: robust meat dishes or sparingly with strong sweet and chocolate flavours.

Try it in this pressed chocolate and lavender torte recipe

Sorrel's name comes from the French for 'sour', and it unsurprisingly has the tart lemony flavour to match this. Don't eat too much at once.

Eat with: torn in salads, or in fresh spring and summer tarts and the like.

Try it in this spring vegetable tarte fine recipe

What to do with leftover herbs