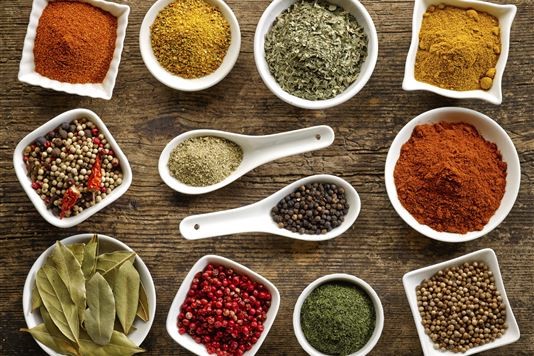 Here's our guide to common spices and how best to use them.

Beautiful fragrant spice with a heady perfume. Gently crush each pod to release the little black seeds – it’s these that store the flavour.
Though traditionally found in Asian cooking it’s also used in things like ice cream, creams and sauces. Diana Henry uses it in this blood orange sorbet.

A classic spice of the sub-continent, cumin has a distinct warm spicy smell. Found in many curries and Asian side dishes, some chefs have begun using it in other things, like this fig and date tart with cumin-chocolate syrup recipe where it works well with chocolate and sweet figs. If you’re after a traditional curry which uses cumin, you can't beat this lamb curry recipe.

It’s a case of two-for-one with the nutmeg tree. It gives us both nutmeg in the form of its seed (known as megs); and mace, which is the dried covering of the seed. Egg custard tarts, rice puddings and apple crumble all need a grating of nutmeg over them. It’s also fab in Christmas puddings and other dishes.

Distinctive tasting berry that is the lead flavouring in gin. Its floral notes work really well with game, so think venison, pheasant and rabbit.
But you can also pair it with other meats such as pork. And, unlike every other spice listed here, juniper is native to Britain.

The bark of the cassia tree, which curls up when drying to give the familiar sticks. Cinnamon is found in everything from curries to breakfast cereals. It also works in drinks such as mulled wine and mulled cider. Buy sticks and grind your own in an old coffee grinder for a fresher, stronger flavour.

Allspice is a major component of Caribbean jerk seasoning and 'mixed spice' here in the UK. It's also found in spiced teas and pickling mixtures, as well as sausages – it's particularly good with pork and chicken. It has a soothingly warm flavour that isn't too harsh and can be used in a wide variety of dishes, from chillis and stews to cakes and biscuits.

Saffron is harvested from the Crocus flower. Each flower only produces three stamens, and it’s these – when dried – that make saffron the most expensive spice in the world. Thankfully you can use it sparingly; a tiny pinch infused in warm water will make any paella or risotto turn a bright golden colour.

Used in Spanish and also Eastern European cooking, paprika can range from sweet mild versions to hot spicy smoky ones.
It’s made by drying peppers and grinding them to a fine powder. As well as being used in dishes, it’s also found in plenty of charcuterie.

Anise is also known as aniseed. It has been used to flavour food, drinks and sweets for a long time and has a very distinct flavour and smell. Anise and star anise are not related but they have similarities in terms of flavour. They also share a similar flavour to fennel. Star anise is traditionally more commonly used in Asian cuisine but has found popularity worldwide.

Seeds of the mustard plants that are generally toasted to release their flavour before other ingredients are added. They may pop and jump, so watch out!
They're used in their whole form in many Indian curries, or mashed into a coarse paste to make the table condiment mustard.

Chilli peppers come in hundreds of varieties of all shapes and sizes, and are used to add heat and spice to hundreds of recipes by cultures around the globe. Heat is measured on the Scoville scale; a jalapeño will rate between 2,500 to 10,000, while the hottest peppers reach into the millions.

It's hard to believe when they come rock solid from the jar, but cloves are dried aromatic flower buds. The tree is native to the Maluku Islands in Indonesia, and cloves are harvested when between 1.5-2cm long. They're used in all sorts of cooking from cakes to stews, and are also great studded into a baked ham.

Ginger is a common, cheap spice that can be found easily in root form, as well as powdered. This makes it highly popular and it is used in all sorts of Asian cuisines as well as in cakes, biscuits and drinks.
A versatile and much-loved spice in many countries.

The heat of horseradish is very different from that of a chilli pepper. It has a sharp, fiery flavour that races to the back of your throat, and pairs exceptionally well with beef.
It can also be grated onto other fish and meats in small quantities; try it with smoked salmon!

Also sometimes spelt 'sichuan', this pepper is commonly used in central and eastern Asian cuisines.
It's very different from both chilli peppers and black peppercorns, as it causes its own unique 'tingling' sensation on the palate as well as a helping of heat and spice.

On the tree, it's called black pepper, and once the fruit is dried, it's known as peppercorn.
Used in sauces or whole in cooking, or ground down into the well-known table condiment, black pepper is a vital spice in everyday cooking across many cultures.

Rib of beef with peppercorn sauce

Popular for both its flavour and ability to produce a vivid yellow colour in finished dishes, turmeric is used in daal and curries in South Asia, and in curry pastes and stir fries in Vietnam and Cambodia. Generally sold as a powder in Europe, the spice is made from the turmeric plant's rhizomes which are boiled and dried before being ground down.
Simple chicken curry recipe

Wasabi is expensive and hard to find outside of Japan. Most of the 'wasabi' you find in the west is actually a mixture of green food dye, horseradish and mustard.
It has a sharp, hot flavour not dissimilar to horseradish, but definitely not identical.

These leaves come from the curry tree, which is native to South India and Sri Lanka. They're used as seasoning and should be added early in the cooking process. Curry powder you buy from the supermarket doesn't necessarily contain these leaves in powdered form. Check the ingredients list before you buy.

The loveFOOD guide to... spice blends

The loveFOOD guide to... culinary herbs

Getting kids into curry - Indian recipes for young people