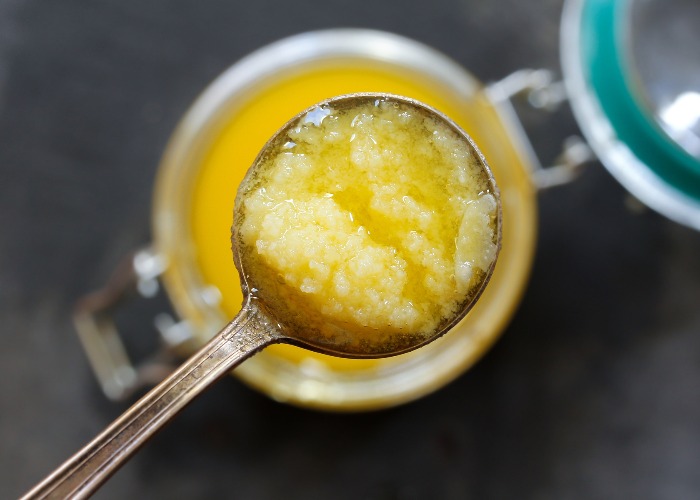 A complete guide to using ghee in your cooking.

Until recently, ghee was seen as just a calorific Indian cooking fat that came slathered on naans and added to takeaway curries. Now its popularity is rising sharply around the globe, and it's being used in everything from soups and stews to stir-fries and egg dishes.

Seen as a ‘healthy fat’ rich in Vitamins A, D, E and K, it’s been credited with boosting the immune system, helping digestion, lowering cholesterol and keeping the joints flexible, among other things.

It’s not just an Indian ingredient that has suddenly found favour in the West though. Versions of ghee have been used in the Middle East and Africa for centuries – as well as in Brazil, Japan and parts of Europe.

In Austria, wiener schnitzel were traditionally fried in butterschmalz, a type of ghee, while rendered or ‘boiled butter’ has long been used in Switzerland to flavour rösti, cakes and pastries.

So what is ghee?

It’s a form of clarified butter: butter with its milk solids removed. It’s a clear golden-yellow liquid when hot that turns a creamy pale yellow solid upon cooling.

It originated in India, where desi (country-style) or asli (authentic) ghee is made from cow’s or water buffalo’s milk. It can also be made from other milks, such as goat’s and sheep’s. 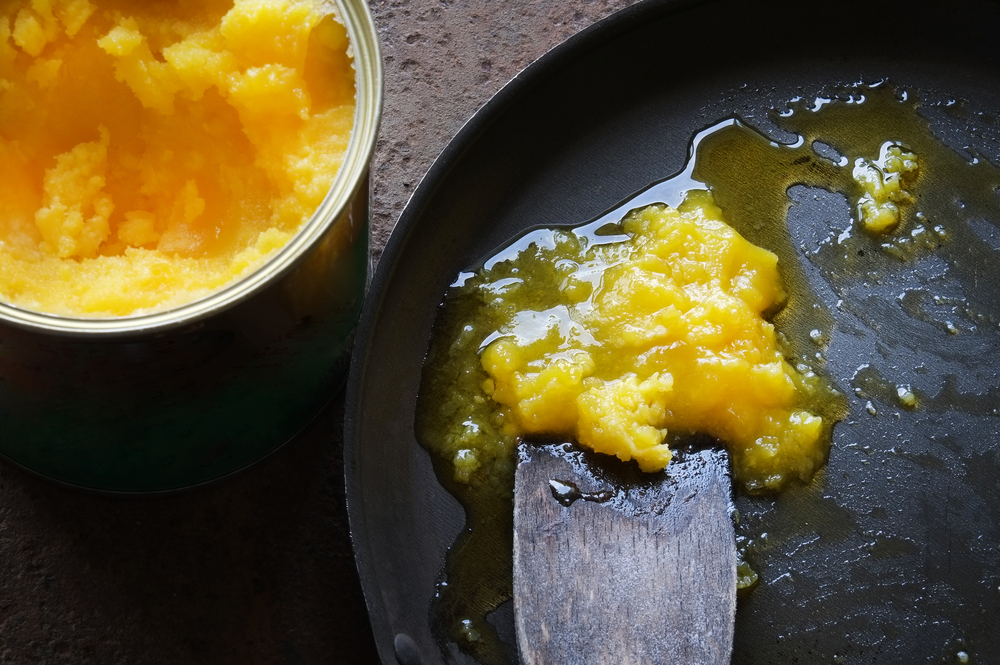 India is the largest producer and consumer of ghee – a word that comes from the Sanskrit meaning for ‘to sprinkle’. There it’s considered the most superior of all cooking fats, and is deeply revered with a huge amount of religious, cultural and culinary significance.

Cow’s milk ghee, regarded as sacred, is mentioned in the ancient Vedic texts, mythology, literature and poetry; and widely used during festivals and religious rituals. It originated as a way of preserving butter, which didn’t keep well in India’s hot climate.

It’s highly prized in Ayurveda, too, where it is the main ingredient in some of the medicines. Indian housewives swear by its medicinal properties for treating everything from coughs, colds and cold sores to burns and rashes, along with moisturising hands and feet in cold weather.

Ghee is essential in many rice dishes, flatbreads, dahls, curries, snacks and mithai (sweetmeats). Sometimes it’s poured onto a finished dish, or served as a condiment on the side to dip food into. More than simply being a cooking fat, it’s used for adding extra flavour and aroma to a dish.

Ghee was seen as fattening and had fallen out of favour with India’s younger chefs, but a growing interest in the west has caused them to re-embrace it, and it’s currently going through a renaissance. 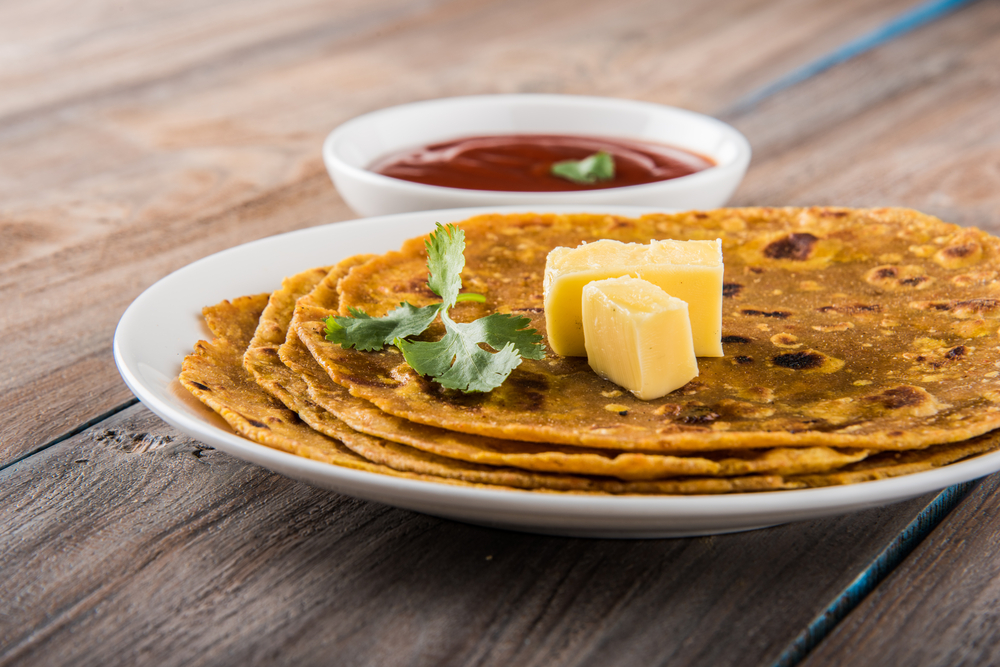 How to make ghee

Although it is widely available in cans and jars, ghee is very simple to make at home and you’ll really taste the difference.

Melt top-quality, grass-fed unsalted butter in a saucepan. Bring to a boil; then lower the heat to minimum and simmer gently, skimming off the foam from the surface. Boil until you have clear liquid fat with brown solid residues at the bottom of the pan, taking care not to burn.

Take the pan off the heat and leave to cool. Strain through a fine-mesh sieve lined with muslin. Ghee can be stored at room temperature for many months, but it can also be refrigerated or frozen.

Finally, do not discard the surface scum – it can be used for flavouring popcorn, soup or steamed vegetables. Most importantly, don’t throw away the residue at the bottom of the pan: incorporate it in bread dough, or season it and use as a spread on toast. 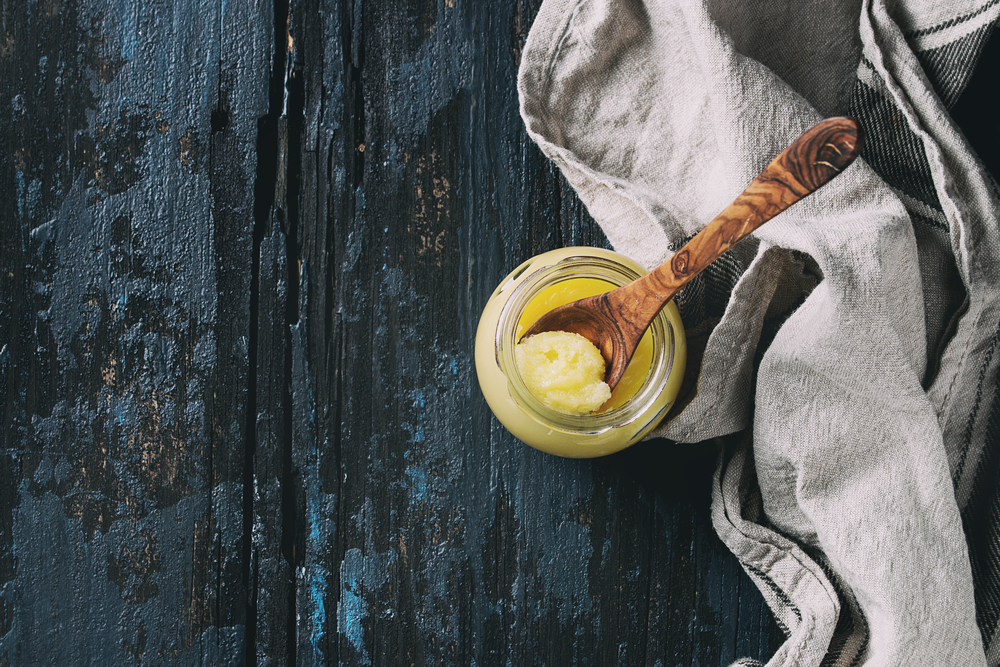 Clarified butter is produced in the same way, by melting butter until the water evaporates and milk solids have settled at the bottom. The fat that is separated from the solids is clarified butter.

Ghee is simmered for longer, until the milk solids at the bottom are dark brown. This gives it a stronger, nuttier flavour and aroma and a slightly darker colour. More water is evaporated, so the flavour is more concentrated too.

Brown butter or beurre noisette relies on the darkened milk solids for flavour. It can be made by simmering butter either slowly or quickly, and the solids are usually left in. Rather than being a cooking fat, beurre noisette is used as a sauce for pan-fried dishes or flavouring for cakes and pastries. Unlike ghee and clarified butter, it doesn’t have a high smoke point. 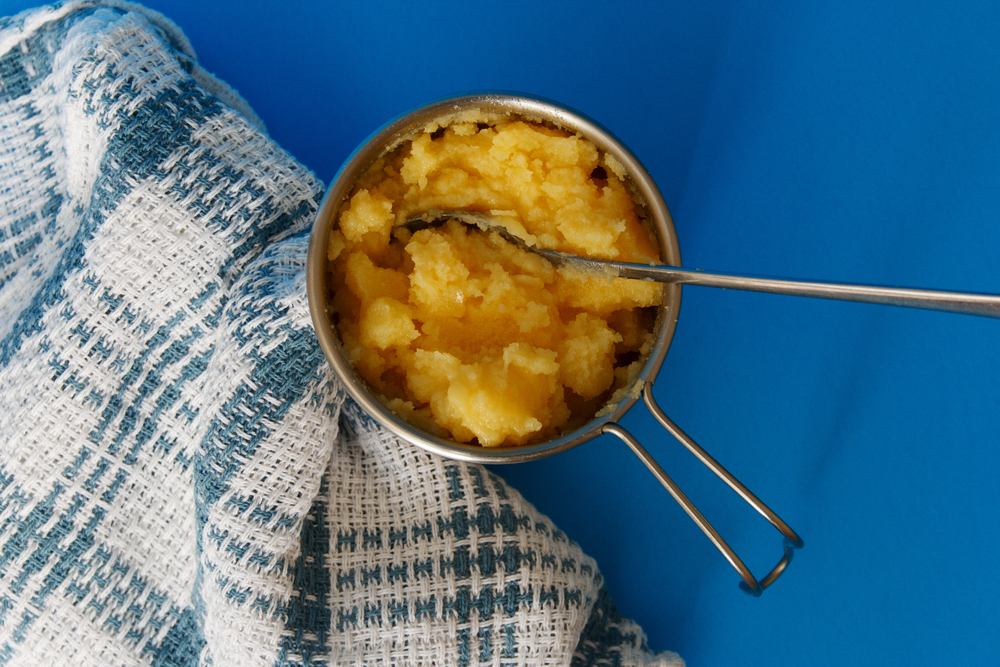 When should you use ghee instead of oil?

As ghee has a high smoke point (the point at which its molecules begin to break down), it’s ideal for pan-frying and deep-frying. It is particularly suited to elaborate or special occasion recipes, and shines when used alongside luxury ingredients such as saffron, pistachios and double cream.

If you’re using quick cooking methods such as stir-frying, or want your dish to taste vibrant or summery, use oil. Use ghee if you’re making a more leisurely meal, and aiming for a richer, sweeter, heartier taste with a creamy mouthfeel.