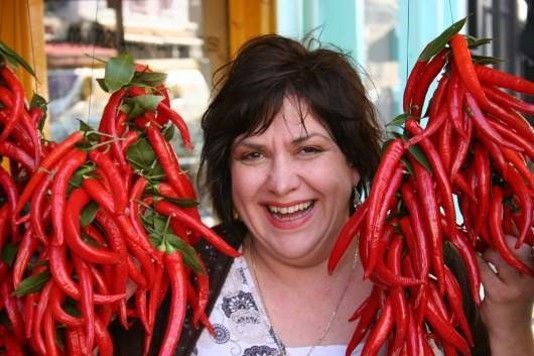 The small shop itself is an absolute delight, if you just stumble across it or are bent on finding some Cassia Bark or a hand plucked bay leaf. It's a textured maze of possibility, so it's no surprise chefs like Gordon Ramsay and Jamie Oliver are fans.

Portobello Road’s famous spice shop started as a small stall in 1990, tended by Birgit Erath as a hobby while she was studying Business at University.  Birgit had a simple coffee table on which she sold just four different spices, adding another one each time she made a profit.  She upsized to The Spice Shop, nestled on the corner of Blenheim Crescent and just a stone’s throw away, in 1995 and now stocks over 1000 spices there in their jaunty trademark yellow tins.

Birgit was born in the Black Forest in Germany and remembers picking wild herbs and mushrooms with her grandmother, which they’d mix into various concoctions or pummel into powders.  On arriving in England she found she couldn’t get most of the spices she needed, so decided to start making her own and later importing the essential ingredients from all over the world.

Birgit’s son Philip now looks after the shop while Birgit oversees a warehouse, cooking school and shop back in Germany.  She still makes up most of the spices herself as has nothing written down, preferring to use memory and instinct.  As a result the spices can vary slightly from batch to batch, but are better for the human touch.  It was Birgit’s friends who first persuaded her to sell and share the magical flavours she conjured up at home.

The small shop itself is an absolute delight, if you just stumble across it or are bent on finding some Cassia Bark or a hand plucked bay leaf.  Outside are fresh lobes of ginger, bags of nuts and lemongrass to entice, while inside the walls are studded with spice tins and little labelled bags: Harissa mix, Thai Green Curry, Kit a Kat Masala, Chipotle Cumin Dust.  Fragrant Cinammon sticks, nutmegs and dried Persian limes deck the counter, garlic twists and reams of dried red chillies hang from the ceiling.  It’s a textured maze of possibility, a supremely stocked British library of flavour as even if you can’t find something it’s often tucked away backstage somewhere.  So it’s no surprise chefs like Gordon Ramsay and Jamie Oliver are fans, Ramsay particularly admiring Birgit’s instinctual way of working and her evident passion for her trade.

Birgit’s son Philip, says Moroccans come to buy the Raz El Hanaut mix for their wives, claiming it’s a better tagine essential than they can find back home.  Personally I love the Greek seasoning for a Lamb Kleftiko and the hot chilli paste for almost anything.  A sprinkle of Sumac can transform a bowl of hummus or aubergine dip, grated nutmeg can romanticise some spinach or broccoli while Smoked Paprika Piccante is a multi-task godsend, vamping up a chilli con carne or home-made sweet potato wedges with its irresistible dusky tones.

The Spice Shop website is brim with friendly cooking tips, such as how to make a steak sauce with Green Peppercorns or an impressive curry from the Curry Basic Mix (not to be underestimated by its modest title – it’s really fantastic).  You can order any spice online, but I wouldn’t miss an opportunity to pop into this little yellow gem yourself, to rummage in baskets of dried shitake, mushroom and exotic mushrooms, or barrels of lavender and rose petals.  Sometimes you don’t even know what you need until your senses are given a kick-start.  The Spice Shop is more than a shop for discerning cooks, keen to add a little je ne sais quoi to their cooking, it’s a fairy-tale adventure.  Plus Facing Heaven chillies are back in stock apparently – how can you resist!