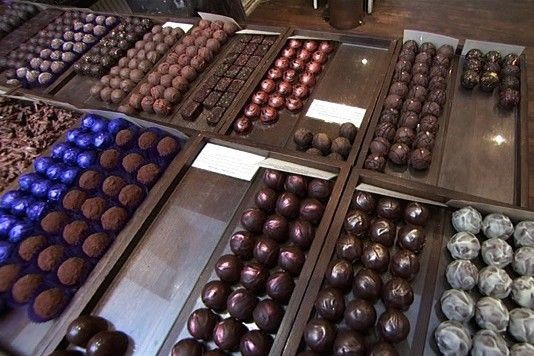 Long before you get to one of Paul A Young's shops, your resistance is stripped away by wafts of the soft, rich aroma of warmed chocolate. Sailors have lasted longer against the songs of the siren.

Somehow, the most exclusive jewellers – the Tiffanys, the Graffs, the Garrards – manage to create their own very, very special worlds. Worlds that you step into, full of awe and longing, to coo over the barely affordable, ineffably beautiful creations.

But there is one place where the jewels for sale are not only affordable, but are edible. And not only edible, but edible to the point of bringing tears even to the eyes of rugged, alpha males. This is the very special world of Paul A Young, the master chocolatier.

Paul has made chocolate his life’s crusade. He is self-taught and has risen swiftly through the ranks of the pudding end of haute cuisine, having been lured to London from his native County Durham by Marco Pierre White to work at the Criterion Brasserie and at Quo Vadis in Soho as Head Pastry Chef.

Passion is a much over-used word these days, but Paul has it down to his toes for a product that evokes it in almost any human being. His passion and his skill have earned him awards, the respect of the upper echelons of this delicious, indulgent world and a ranking in the top small handful of chocolatiers on the planet.

His renown in the world of chocolate is down to his insistence on perfection, his creativity and his instinctive understanding of the nuances of flavours and their combinations. Not only does Paul refuse to create with anything but the best chocolate – from legendary stables such as Valrhona, Amedei and Michel Cluizel – but he knows that when a soothing 66% Venezuelan chocolate is needed, with all its delicate floral notes, a 70% Peruvian, with its fruitier character, will simply not do as the basis of a ganache. 4% makes a world of difference in the pursuit of perfection.

Along with this, Paul is celebrated for bringing together flavours that would otherwise appear as unlikely bedfellows in a 12 tog duvet of the finest chocolate: sea salt and caramel, chilli and Meyer honey, gingerbread ganache and, of course, port and stilton truffles (of course). What makes you gasp is that, together with chocolate, these flavours really work. We all know that chilli has almost alchemic properties when introduced to hot chocolate (just watch the metamorphosis of Judi Dench’s Veuve Voizin in Chocolat after a cup of that), but Paul does it again and again with sublime results.

His latest triumph is the arranged marriage between chocolate and the rare and delicate White Silver Tip tea, a collaboration between Paul and the queen of tea Henrietta Lovell, founder of the Rare Tea Company.

And who wouldn’t decline a champagne truffle at Christmas? Paul sells 20,000 of them at this time of year.

Every truffle, every bar, every praline is made lovingly by hand by a team of less than two dozen, split between his two shops. Only the highest quality ingredients are used, and with absolute precision. And no artificial ingredients ever find their way through the front door, let alone the kitchen.

Long before you get to one of his shops, your resistance is stripped away by wafts of the soft, rich aroma of warmed chocolate. Sailors have lasted longer against the songs of the siren.

Located in Camden Passage, Islington and in the Royal Exchange, close to the Bank of England, these are exactly what chocolate shops should be: bijou, magical, fragrant and cossetting. Everywhere you turn, there are serried ranks of precious truffles, twinkling with invitation, bars of artisan chocolate, stacked like ingots, as well as the little bricks of Paul’s exquisitely fudgy brownies, the largest, richest, densest and incomparably the finest brownies, to my mind, on the planet.

Once you’re in there, little nibbles of the individual chocolates are proffered and in no time at all you are overpowered by the allure of it all and soon, you find yourself watching as truffles and ganaches and all sorts of goodies are gently packaged and wrapped, with great attention to detail.

Just as you came to the shop with all the anticipation of a child at Christmas, so you leave this mini principality of sweetness and flavour with no guilt, just a feeling that, inevitably, you’ll be back for more.

For more information and go to www.paulayoung.co.uk.

And if the seduction is complete, buy Paul’s book “Adventures with Chocolate

”.Published in 2009, it has been voted the “Best Chocolate Book in the World” and the Gourmand Book Awards in Paris and has recently been included in The Independent’s 50 best cookbooks.