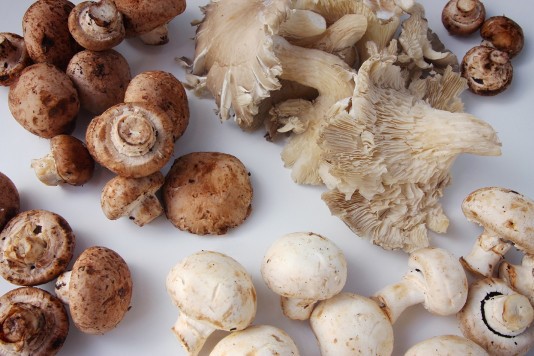 I love eating meat but you can replace meat with mushrooms on my plate anytime of day or night. Why?

As far as I am concerned mushrooms are the king of all vegetables; although technically they are in fact fungi.

Why do I love them so much? Not only do they taste delicious and can be cooked in a multitude of ways, they come in a variety of shapes and sizes and contain more potassium then an average banana. They are also low in sodium, carbohydrate and fat while also being high in fibre making them your best friend in more ways than one.

However mushrooms aren’t king based solely upon their nutritional merits but rather their unsurpassed capability to be the refuge of both vegetarian and meat-eater alike.

My love for all things flesh

I have eaten meat for as long as I can remember and devour pork or chicken about 6 times a week on average. My love for all things flesh has meant that I very rarely, if ever, have the need for a meat substitute – which in principle, goes against everything I have and ever will stand for.

The main issue I take with products pretending to be meat is they are inadequate at replacing your desire for the real thing and while they may work within the dish – the original would work just as well if not better.

Take for example Paneer cheese which is a common meat substitute in Asian cookery. In the past, I have sampled a Paneer Cheese Tikka Masala and while the flavours of cream, butter and spices worked well with the cheese I couldn’t help craving the superior chicken variety.

Another offender is tofu which despite numerous claims at its potential to be delicious – has always left me wanting.

There has only ever been one meat substitute with the power to truly satisfy me instead of the usual chaotic clamouring for the nearest butcher - the humble mushroom.

Why the humble mushroom is King

I discovered their magical ability during a trip to Otarian; the eco-friendly vegetarian resturants that have recently opened up in London. Upon being a faced with a menu completely devoid of meat I opted for the field mushroom burger with about as much excitement as a child waiting to see the dentist.

To say I was pleasantly surprised is by all intents and purposes an understatement as for the first time in living memory I enjoyed a meat free meal without the usual poultry distractions.

I have since gone on to realise that mushroom stroganoff is just as good as the beef variety; this delicious recipe for mushrooms on toast can be served in place of a bacon sandwich at breakfast and mushroom lasagne is no longer held in reservation for when one of my two vegetarian friends decide to come for dinner.

Whether it’s the meaty texture of the larger varieties such as Portobello, their genuine versatility or the flavour that works well with a number of other ingredients; mushrooms are the only option I consider when contemplating the occasional meat less supper.

And coming from the mouth of a ferocious carnivore is evidence enough as to why the mushroom is truly king.