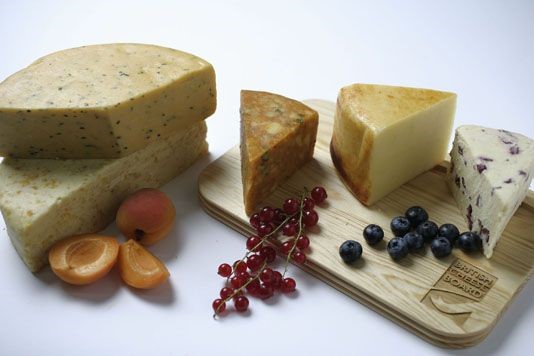 The moon may not be made of it, but there are plenty of other myths that have flourished about cheese.

Enticing though it was, I always avoided the cheese board when out for dinner. It gives you nightmares, I was always told. And given that I have something of an excitable imagination at the best of times, coupled with the odd bout of insomnia, it was something I could do without.

But at a recent dinner party, it was too tempting: goat’s cheese creamily oozing under a thick rind, the peachy-coloured Appleby’s Cheshire, and a fat Cornish Yarg wrapped in its distinctive cloak of nettle leaves. I gorged, expecting the night ahead to be fuelled with dairy-induced nightmares.

But nothing. I awoke refreshed, no dreams at all, but determined to track down why I had been so misled.

And, it’s not the only myth that has been giving cheese a bad press.

The origin of the myth is unclear – one theory is that it originated from Charles Dickens’ Ebenezer Scrooge, who blamed his night-time visitations on a “crumb of cheese”.

However, one of the amino acids in cheese – tryptophan – has been shown to actually reduce stress and induce sleep. And a study by the British Cheese Board found no evidence of it giving people nightmares, although Stilton did prompt some rather vivid dreams. 200 volunteers ate 20g of cheese half an hour before bed and 72% slept well every night, 67% remembered their dreams, but none recorded nightmares.

Cheddar caused participants to dream of celebrities and Red Leicester prompted nostalgic dreams. Cheshire cheese is likely to give you a dreamless sleep.

It is true that the type of mould used to make blue cheese is part of the Penicillium family but it isn't able to produce penicillin, says the Food Standards Agency.

If you are sensitive to penicillin, you can potentially have an allergic reaction to milk. But this will only happen if the animals that produce the milk have been treated with antibiotics. It is a rare occurrence, as there are rules which state that after treating animals with antibiotics, a certain amount of time must pass before either the milk or meat from the animals is allowed into the food chain.

Myth 3: Wine is the only drink that works with cheese

It certainly complements it nicely but so too does beer – look at the classic combo of a pint of bitter and a ploughman’s.

Or, if you’re feeling more adventurous, try whisky. The British Cheese Board attempted to match whiskies with different types of cheese and came up with the likes of Glenmorangie Original with a Somerset Brie. “This light whisky has accents of passion fruit, orange and vanilla. When sampled with the brie, the creaminess and saltiness comes through,” the board reported. It’s a tough job but someone has to do it!

Cartoons have been conning us all along – if you want to catch a mouse, don’t load the trap with cheese. Researchers from Manchester Metropolitan University studied what attracted and what repelled the rodents and found that they prefer foods with a lot of sugar, such as chocolate, as a mouse's natural diet is primarily made up of grains and fruit, both high in sugar. Rodent catchers also say that peanut butter and bacon work well!

Myth 5: Avoid cheese if you are lactose intolerant

People with lactose intolerance often find that they can eat cheese without any problems, says the Food Standards Agency, as cheese contains much less lactose than milk.

You can also get lactose-free soft and hard cheese nowadays. Visit lactofree.co.uk for more details and to find out where to buy it.

Some strict vegetarians avoid cheese in the belief that it is made using animal rennet, the ingredient that coagulates the milk. However, nearly all British cheese is suitable for vegetarians, says the British Cheese Board, even if it does not say so on the label, because it is now made using a non-animal rennet alternative.

There are still a handful of traditionally made farmhouse cheeses that still use animal rennet but chances are you would be buying these from a decent cheesemonger, who should be able to tell you whether it is suitable for veggies or not.