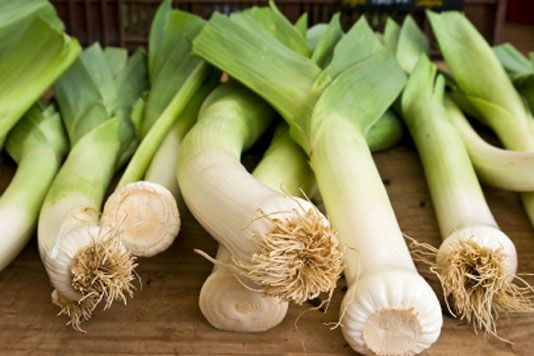 The humble leek has a long and distinguished history.

The humble leek has a distinguished history. It was eaten by the Egyptians, the Ancient Greeks and the Romans, who almost certainly introduced it into Wales.

Like many Welsh people today, the Romans considered leeks to be far more refined than the stronger flavoured onion.

We cannot be sure how many onions they ate before they came to this conclusion.

What we do know is that it is St David’s Day tomorrow, which gives us a good excuse to celebrate the leek. Did you know that the leek has the notable distinction of being one of the few - if not the only - vegetables to save an entire country?

I didn't until I was put right by the helpful folks at the Flour Advisory Bureau. Here’s apparently what happened:

According to legends passed down through generations of Welshmen until it reached Wikipedia, the leek saved Wales during the battle of Heathfield in 633 AD.

Don't start envisaging soldiers from the Dark Ages fighting each other with huge numbers of the oblong green vegetables. Or leek juice being used to heal dying Welshmen.

Sadly, no, it wasn’t quite as exciting as that. Here’s how it happened (apparently): A celtic monk named David persuaded the Welsh army to distinguish themselves from their Saxon enemies by wearing a leek in their helmets.

The army went on to win the battle and David the monk became St David, or Dewi Sant as he is known in Wales.

In other words, you could say the leek acted as a sort of good luck charm for the Welsh. (Not for the Saxons.)

Henceforth, the Welsh have been proudly wearing leeks on St David's Day, although they have admittedly ditched the helmets.

Still, wearing leeks as a means of distinguishing yourself from a Saxon – well, that’s not all leeks are good for. Oh no....

Unfortunately, Nero is unavailable for comment so again, we can’t vouch for whether this is true or not. But it seems unlikely.

What we do know is that leeks are the original "superfood", high in not only fibre but also heart protecting substances such as flavonoids and polyphenols, which help to prevent our blood vessels from damage, and folate, a B vitamin which also supports our cardiovascular system.

We hope you’ve enjoyed finding out about leeks – but we suspect you’ll enjoy eating them even more, especially if you rustle up one of these top lovefood.com recipes:

2) Rosemary Moon's winter pork – This is a very simple dish made with pork, leeks, parsnips and other root vegetables, as well as Bramley apples and chives. Mmmmm... Read this recipe

3) Phil Vickery’s one pot turkey pilau – One pot dishes means more free time with the family while the dish is in the oven. Even better – there’s less washing up to do after! This yummy dish combines leeks with onions, garlic, British turkey steaks, chopped tomatoes, basmati rice, broccoli, peas, raisin, coriander and yoghurt. Read this recipe

4) RSPCA’s pea and ham soup - At lovefood.com, we are supporting the RSPCA campaign to encourage shoppers to ‘Think Pig’ and choose higher welfare meat. Celebrate St David’s Day with a clear conscience by cooking up a soup that combines peas and ham with – you guessed it - leeks! Read this recipe

Finally, here’s a free leek recipe from the Flour Advisory Bureau in honour of St David:

Preheat the oven to 180C/gas 4. Lightly fry the leeks in oil until soft. Cut one circle from each slice of bread using a metal cooking ring (make croutons to use in at a later date with any scraps by drizzling with oil and chopped rosemary, sprinkle with salt and bake in the oven till crisp and golden). Place four slices of bread inside rings in the base of a large ovenproof dish. Add a layer of leek and a layer of cheese, repeat and finish with a circle of bread, reserving a little cheese to sprinkle on the tops. Whisk the egg, milk, mustard and cayenne together and slowly pour in the egg mixture. Sprinkle on the remaining cheese and leave to stand for 30 minutes so they can absorb more of the egg mixture. Bake for about 25- 30 minutes until golden and lightly set. Serve with a green leaf salad!

Cook's Note: Cooking rings are available from all cookware shops or you could make your own by removing both ends from small tins such as baked bean tins. They are great for making individual servings look very fancy

How to cook the perfect egg