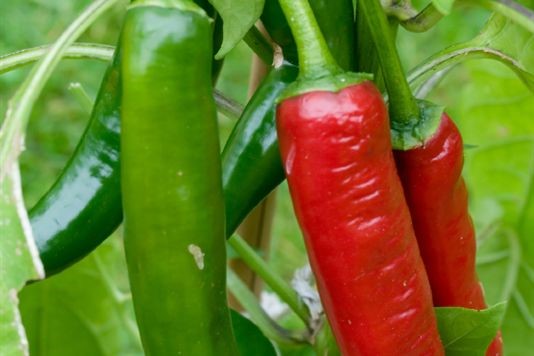 Can you really grow chillis in Northumberland?

Oak-smoked kippers, wild roe venison and Northumbrian jersey ice-cream, all great local produce that you can find in the far reaches of Northumberland. Oh yes, and don’t forget the chilies.

From habaneros to cayennes, Dan May has managed to grow as many as 70 different varieties of chilli, despite the chilly weather. “Everyone told me it was going to be impossible to grow chilies in this part of the world,” he says, “but it’s actually relatively simple. Provided you give them the protection they require from the cold and wind and the worst of the heavy rain, they are pretty robust.”

How it got started

Dan developed a taste for different varieties of chillies whilst working as a photographer in the southern states of America and in Mexico. But when he got back to the UK five years ago, he found he couldn’t get the same produce over here, so he decided to grow some himself.

And it went extremely well. “To my great surprise virtually all the plants produced thousands of chillies. They crop throughout the season, so you pick them and you’re thinking ‘we’ve done quite well’ and then 2 weeks later you’ve got the same amount again. That first year we were still picking fruit at Christmas time.”

From chillis to hot sauce

With all these chillies lying about, Dan had to find something to do with them. So he launched a range of hot sauces and marinades, and his company, Trees Can’t Dance was born.

Today, they have 15 core marinades, spice rubs and chilli sauces, including Chipotle, Congolese hot sauce and a Belizian habaneros sauce, and other products like pickles, chutneys and jams. There are also chilli oils in the pipeline and a chilli mayonnaise.

Because he is concentrating on the sauces, Dan now grows fewer varieties, and the farm is used primarily to grow crops of chillies to experiment with new flavours for future products.

Amongst the mildest chillies grown is the Hungarian Hot Wax, similar to a sweet pepper, which Dan pickles or sticks in salads for a bit of crunch, or on pizzas. They also grow tropical chillies, which need a more humid atmosphere and tend to be much hotter.

The Ring of Fire, a chilli of the cayenne variety is between 7 and 8 on the heat scale and is really robust – perfect for the UK climate. “It will grow almost no matter what you do to it,” says Dan.

Challenges of growing up North

The main difficulty of growing chillies so far north is keeping the temperature not warm, but regulated. “It’s the wide fluctuations in temperature that stops the plants producing as much fruit,” says Dan, “although achieving the temperatures in the polytunnels during the day isn’t hard, at night it’s quite difficult to keep it above 20°C and we don’t use any additional heating.”

Once the summer kicks in though, Northumberland gets between 2 and 2.5 hours more sunshine per day than the south coast of England. So even though they don’t start growing as early, the plants catch up and they crop from as early as June to as late as mid-October, depending on when the frosts start to set in.

Tastes are getting hotter

Dan has seen the demand for the company’s chilli sauces grow exponentially. His mango and chilli marinade recently won silver at The Grocer food and drink awards and the sauces are now sold at Tesco and Sainsbury’s.

As well as using the 10,000 bushes of chillies grown in Northumberland, they now import chillies from India and Central America to meet demand.

Dan attributes the changes to people being used to eating more spicy foods. “It’s not that people are just experimenting more; they are actually cooking dishes with these flavours a lot more than they were even five years ago.”

And what if you can’t take the heat?

No need to get out of the kitchen. Dan suggests finely dicing chillis and then sprinkling them over a hot dish so they steam slightly. “That way you notice the freshness and the fruity aroma,” he says, “without the huge kick of heat.”

Journal: How hot is your habaneros?