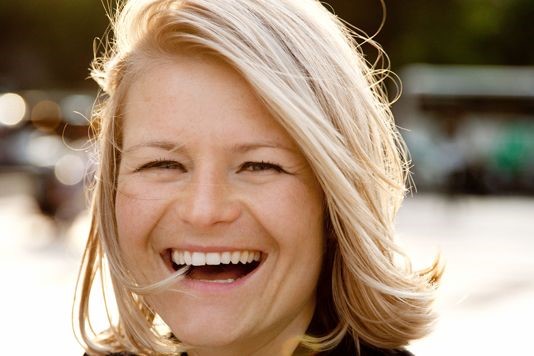 Harriet Eastwood, one of the four presenters of Channel 4’s Cook Yourself Thin, is certainly making waves this week. Petit Pois, her new line of cupcakes, scrumptious little confections made healthy by courgettes and carrots are selling, well, like hot cakes at Selfridges. Now her brave take on revising the French classics looks to be a sell-out success as well.

The Skinny French Kitchen, her latest book, certainly delivers on its promise to never again make you feel guilty in indulging in duck comfit and chocolate profiteroles, due to a canny tinkering with ingredients to lower the fat.

Taking on the classics

Harry, who grew up in France, devised the idea while living in Paris. Her neighbours and food suppliers were her fiercest critics, giving the seal of approval to each remade dish. Only then were they included in her revised collection of classics such as beouf bourguignon, gratin dauphinois and rich chicken liver pate. Even the tricky-to-conquer macaron underwent a remake.

Also included in the book are low-fat dishes that are relatively unknown on these shores but feature regularly on French brasserie menus. “There is a popular myth that French food is full of fat, which is simply not true,” she says. “It is not unusual for a French brasserie menu not to list Salmon Tartare, Calves Liver, Tarte au Pommes Fines and at least three salad options.”

The French, she added, always have a vegetable starter, be it cooked artichokes or crudités, and make their vegetable dishes such as ratatouille and mushroom tarts as appealing as possible to meet their exacting standards.

Why improve on a good thing?

Harry, who moved to France at the age of four, developed her interest for food growing up amongst people who cared passionately about it. “I love French food. Unfortunately, most traditional French food does not love me,” she says. Struggling to keep her weight under control has been a lifelong battle, but her intrepid journey to re-invent healthy food to appeal to the most jaded of palates has seen her successfully devise recipes that work distinctly on her terms.

Additive-free, free-range and high-quality ingredients have gone into her successful remakes of high calorie dishes such as a crispy remake of deep fried chicken and steak and kidney pie, earning her renown on both sides of the Atlantic through the Cook Yourself Thin franchise, and further fame through her cookbooks that demonstrate how easy it is to cook great dishes in a healthy way.

“There is no compromise between health and flavour – it’s all possible at once, and in fact the two go hand in hand,” she says.

Harry is a firm believer of adopting the French approach to food as a key to keeping slim as well as sated. “It’s all about portion size,” she says. “The French diet is made up of small amounts of full-flavoured and varied foods. Portions are small by British standards but you will always feel satisfied if what you are eating has a ton of flavour.”

Equally, meals across the Channel tend to be balanced, with loads of lean meat and fish, as opposed to overindulging on cream and fois gras, as one would expect in a culture boasting of one of the world’s best cuisines. “The French have a keen sense of the aesthetic, especially when it comes to food,” she explains.  As a result, she says, plates piled high with food, with more than one vegetable, are not considered attractive.

“The French would prefer to stretch the meal over three small courses, served on smaller plates. Breaking the ingredients into smaller courses and adding in time as an ingredient to slow down the meal enables them to feel fuller and more satisfied on less food.”

Of course, France is a country where lunch breaks tend to be nearly two hours long. What do you do if you only have time to grab a sandwich at your desk? Harry says that what has helped her keep her weight in check is not to eat on the go.

“I find the reason that eating while doing something else is dangerous is that my mind doesn’t register on what I have eaten at all. It’s as if what I’ve consumed doesn’t count at all – I was sort of eating,” she says.

Instead, she claims investing in great ingredients and mentally embracing the process of cooking a great meal from scratch can more than compensate from the fleeting boost gained from a careless snack.

Why not try it?

The Skinny French Kitchen, published by Bantam Press, is on sale now for £11

Also worthy of your attention:

How to cook the perfect egg by Gizzi Erskine