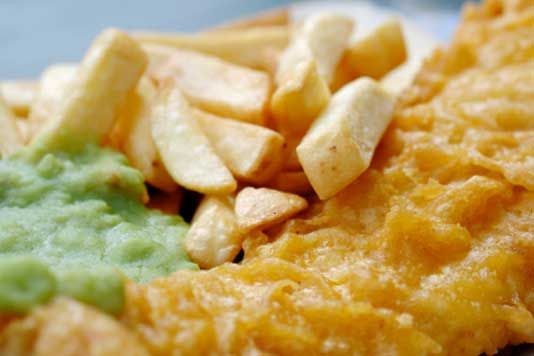 PLEASE NOTE THAT THIS ARTICLE IS NOW OUT OF DATE

The place of the “chippy” as the nation’s take away of choice may be losing ground to recent interlopers from India, China and Italy, but there are still over 12,000 fish & chip shops to choose from in the UK.

With master fryers now looking to buy their fish from sustainable sources and offering healthier alternatives to the deep fried favourite, it would seem that reports of the demise of the fish supper have been exaggerated.

Fish and chips are one of the earliest examples of fusion cuisine. In the late 18th Century, refugee Portuguese Jews in East London, who knew a thing or two about fish frying, met Belgian exiles with similar skills in potato preparation.  The two soon combined in one dish and, in 1860, one Joseph Malin is credited with opening the first fish & chip shop in Whitechapel.

By the early part of the 20th century, there were over 25,000 fish & chip shops in Britain and so important a part of our culture was the meal that it remained one of the few dishes not to be rationed throughout World War II for fear of the negative impact that would have on the nation’s morale.

Fish and chip shops suffered an alarming decline from the 1970’s onwards, particularly after Britain’s infamous “Cod Wars” with Iceland, which saw the cost of buying fish escalate.

However, despite that and more current concerns about the sustainability of fish stocks, the chip shop has proved remarkably resilient and there are still some terrific examples to be found.

Here are six of my favourite “chippies” from around the U.K.

My favourite chip shop in the country is to be found in the unlikely setting of a slightly grim shopping precinct in Birmingham.  Owners, Conrad and Andy source their fish from the well-managed Icelandic stocks and cook them the old fashioned way, in beef dripping.  Since they first opened their doors in 2007, they have won a plethora of awards including being voted “England’s Best Fish & Chip Shop” in 2010.

The Scots have very strong opinions about what makes the perfect fish supper and the queues that form at The Anstruther (pronounced “Anster”) Fish Bar the moment they open are more than proof that they deserved their award for “Seafish Fish & Chip Shop of the Year” in 2008/9.  All of the wide range of fish on offer is caught in managed waters and they even occasionally have Mackerel caught by members of the family.

Regularly cited as Belfast’s finest exponent of the fish fryer’s art, Long’s is definitely worth seeking out.  The shop is hidden down an alleyway well away from the city centre and the metal grate protection on the windows tells tales of troubled times past. It doesn’t even have a website, but it’s famous on the web. The service is extraordinarily friendly and the portions as absurdly large as you will find anywhere.

Arguably the most famous fish & chip shop in the country. Not least for the hideous wait that has to be endured before you snaffle one of the coveted tables.  Once you do, however, the fish & chips are definitely worth it and the old school table service reminds you of childhood seaside holidays.  Oh, they also make some of the best mushy peas I have ever tasted.

Many people, particularly those of a Northern persuasion, would shake their heads if told that London still had a decent fish & chip shop.  But, Master Superfish in Waterloo is just that and can hold its head high amongst the best.  The parade of London Taxis outside tells you that the local cabbies are also in on the secret.  Order the “Masters Special”.  If you can finish it, I salute you!

A very special fish & chip shop, that may have changed ownership over the years but has never veered from supplying some of the very best in Wales.  Their current battle to get Mackerel and Hake on the plates of their customers instead of the usual Cod and Haddock shows their commitment to sustainability.  But, this is never at the cost of quality and you really wont find many better in the whole of Great Britain.

Tell us about your favourite fish & chip shops

I wish I could spend my days travelling the country and eating only at fish and chip shops, but sadly I have to earn my crust in other ways. If you know of a fantastic fish and chip shop I’ve missed off the list, please do share it with other lovefood.com readers using the comments box below!