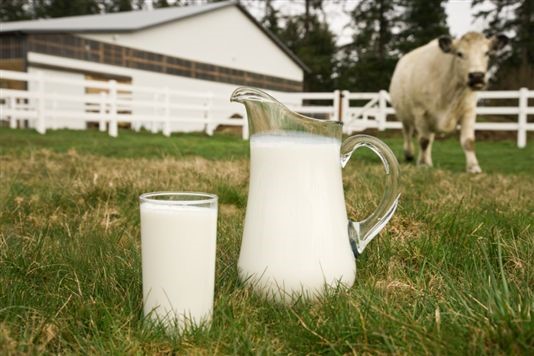 If you think you can't eat dairy, think again...

Did you know that 15% of the UK population (1 in 7 people) are thought to be lactose intolerant?

Indeed, many people who think they have been experiencing the symptoms of irritable bowel syndrome (IBS), such as stomach cramps, bloating and nausea (among other things), may in fact be lactose intolerant – me included.

Up until a few weeks ago, I was pretty clueless about the term ‘lactose intolerant’. However, having got a tad tired of constant stomach pains and feeling like a bloated whale, I decided to look a little closer into what being lactose intolerant really means.

What is lactose intolerance?

Lactose is found in dairy products. However, being lactose intolerant shouldn’t be confused with being allergic to milk/dairy. There is a difference.

Lactose intolerance is caused by the body’s inability to digest lactose. This is the natural sugar found in milk and other dairy products. For some people, the body is simply unable to produce enough of the lactase enzyme in the digestive tract which helps to digest the lactose. Without this enzyme, digestion of lactose becomes difficult. And it’s this that causes stomach problems.

In contrast, if you’re allergic to cow’s milk, your immune system reacts badly to one or more proteins found in milk. The reactions to this can be severe, and as a result, a milk allergy can be dangerous.

Lactose intolerance, on the other hand, won’t produce a serious reaction because it doesn’t involve the immune system. Instead, you’ll just experience discomfort.

What can you do about it?

Unfortunately, lactose isn’t only found in milk. You’ll find it in all sorts of things – such as crisps, biscuits, crackers, fruit bars, pasta mixes and iced tea.

If you think you might be lactose intolerant, the best thing to do is to try to eliminate it from your diet - which is exactly what I’ve been doing over the past couple of weeks.

Thanks to food products by Lactofree, this is far easier to do than you might think. That’s because all of these products have had the lactose removed.

Currently, there is a fairly decent range of Lactofree products on offer. These are:

Lactofree is also planning to launch a cream in May for £1.04.

Over the past couple of weeks, I’ve been consuming all of the above products to see how they compare to your bog standard milk/yogurts/cheese and so on, and to see whether my symptoms improve.

And I have to say I’m pretty impressed. In the past, I have tried soya milk and soya yogurts, and to be honest, I didn’t particularly enjoy them. Anyone who has tried soya products will know the fairly distinctive taste they have, which is quite different to that of standard milk/yogurts.

But in contrast, lactose-free products taste pretty much the same as any standard product (and by standard, I mean those that still have lactose in them).

The only real difference I have noticed is that lactose-free products generally taste a bit sweeter. (If you want to know the scientific reason for this, it’s all down to the lactase enzyme that is added to break down the lactose into galactose and glucose which taste sweeter.)

I’ll also admit that I found the hard cheese a little on the rubbery-side - so not particularly great if you’re a cheese connoisseur!

So there hasn’t been much disruption to my normal diet. I can still have milk on my cereal and in my tea, I can still have yogurts, and I can still enjoy cheese sandwiches. What’s more, these products can easily be used in cooking – as I proved with my pancakes, custard and lasagne.

Over the course of the trial, I have to stay my stomach did feel better. As time went on, I was no longer bloated and I was no longer sitting at my desk at work dealing with painful stomach cramps – which was bliss! And the best bit was, I hadn’t had to change my diet dramatically to achieve this.

That said, I’m not going to declare here that I’m 100% certain I am lactose intolerant. In order to fully assess this, I will now need to gradually introduce lactose products back into my diet.

But, having seen my symptoms improve, I really would recommend that anyone who thinks they might be lactose intolerant (or has experienced symptoms of stomach cramps and bloating) gives this diet a go.

Where can you get the products?

This is currently the major drawback. Unlike the majority of soya products which are readily available in supermarkets, Lactofree products are not always as easy to come by.

Most supermarkets – Asda, Waitrose, Sainsbury’s, Morrisons and Tesco – will stock certain Lactofree products, but whether they stock the full range is a different matter all together.

The portion packs of milk are even harder to come by. If you want some, you’ll need to go to a large Tesco store where you can buy them for 12p each or 50p for five. Alternatively, you can order boxes of 100 packs online for £10, plus £3.95 (although unfortunately, they are currently sold out).

In the long run, I hope to see more lactose-free products introduced onto the market – and hopefully supermarkets will start to stock more of these products.

After all, a quick scout around the internet clearly shows that the demand is there, and Lactofree tells me it has had requests for a lactose-free ice cream and lactose-free butter, among other things. Personally, I’d like to see a lactose-free skimmed milk being introduced, as well as a greater variety of yogurts.

So all that leaves me to say is watch this space...