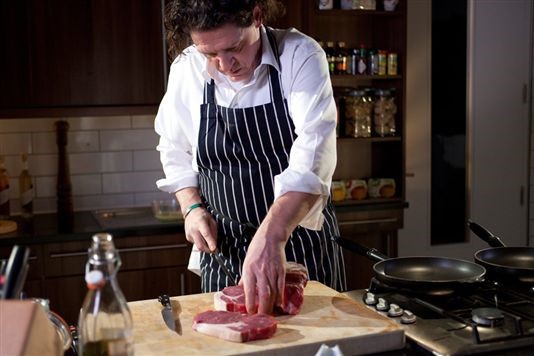 What's Marco Pierre White really like? Is he as hot-tempered as his reputation suggests he is... or a real sweetie in the kitchen?

Either the hype was baloney or Marco Pierre White had a mega dosage of happy pills before he revealed his grilling secrets to lovefood.

I was expecting someone primed to spear foodie fools on a toasting fork, never mind suffer them gladly. But he greeted us with a broad smile at the door of his eponymous restaurant at Chelsea FC.

The kitchen was hot, yes. But far from hellish. In fact, Pierre White is such a sweetie that he stood chatting over the grill for more than an hour with the aircon off, just so we can hear him.

Pierre White blames the media for creating his reputation as a fearsome and foul-mouthed taskmaster. They must have got the idea from somewhere.

Did the working-class boy from Leeds, who trained under the Roux Brothers at Le Gavroche, then Pierre Koffman, Raymond Blanc and Nico Ladenis, before winning three Michelin stars of his own by the age of 33 – the youngest chef ever to do this – get his stripes without even a flash of the fiery temper he is known for?

Whatever the truth, today Pierre White is all smiles and charm: “Can you spare five minutes to watch me chop an onion?” and, “Go on, please take my fabulous chef’s knife home with you”.

His food has mellowed along with his soul. He recently bought a share in The Box Tree in Ilkley in Yorkshire, owned by his old friend Simon Gueller, where he trained. It serves Michelin-starred food, which, says Pierre White, “doesn’t interest me at all”.

The rest of his empire covers more convivial, family and friends-orientated establishments – he serves posh steak and fish to the football crowd at Stamford Bridge, co-owns the Frankie’s steakhouses with jockey Frankie Dettori  and has upmarket pubs such as The Swan Inn in Aughton, Lancashire. There are others, some international, and too many to mention here.

“I’m over all that [the posh food]. For me, the most important meal of the day is the one eaten with the family,” he says. “Rather than taking any notice of food trends, we should focus on eating well.

“In classical cuisine, the world I stepped into, we were dominated by time and dictated to by recipes. Why? Food should be about your own personal taste. It should be an extension of you as a person.”

What he loves most about cooking, he says, is its connection to Mother Nature and the respect you learn for food and its provenance, which he thinks more important than whether something is organic or not.

Yet he’s here to explain his tie in with Knorr, the stock manufacturer. He has been their “face” for several years. “I’ve always used Knorr to season meat in my restaurants. When I revealed this in an interview four or five years ago, they came to me.”

So he uses it in his restaurants? Top chefs use Knorr to prepare food for Abramovich and his Chelsea cronies? Yes - that’s what the man says.

His method is simple. Pierre White takes a stock cube or two, mashes it into a paste with a glug of olive oil, massages it into steak, chicken or tuna, and cooks it in a grill pan.

The produce is all great quality – the chickens are from Allens of Mayfair, the beef from Donald Russell. He says he uses Knorr because it is the best way to keep the seasoning on the flesh while cooking it. Salt, when rubbed into a steak with oil before cooking, comes off the meat in the pan. And you can play about with the herbs and spices you add to the paste of stock and oil.

I’m a big fan of salt, and the Knorr/no-Knorr taste test reveals that the stock gives the meat and fish a saltier taste than without it.

Pierre White explains that he loves branded kitchen cupboard staples because of their nostalgia factor. “We all love the food we were brought up on. My mother was Italian, so that is one of my favourite cuisines, but I love salad cream, corned beef and Branston Pickle. There was always HP on our table and Sarson’s malt vinegar on a chip butty. Our palates are borne out of our childhoods.”

You’d think he was sick of the ongoing feud with Gordon Ramsay, often reported on in gossip columns. But Pierre White brings it up himself, saying that their styles differed on the Hell’s Kitchen programme because Ramsay bullied and belittled his contestants where he nurtured and cosseted them. Ouch.

What does Marco Pierre White think of our Great British restaurant culture, which he can be credited, in part, for creating? Finally, a hint of the grumpy old man creeps in. “The golden age of gastronomy is over,” he decrees. “The romance just isn’t there anymore.  Everything is run by accountants.”