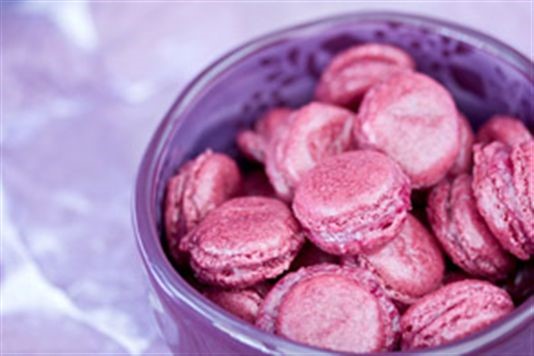 It's hard to escape the macaron phenomenon, but baking them can be tricky and buying them is expensive. With a little patience however, you can learn to make them yourself.

Macarons are the new cupcakes. That's old news, I know. I've been in love with macarons for about a year, culminating in a visit to France where I visited the place that claimed to be the country's number one macaronerie. As you can imagine, the macarons on sale there were pretty damn fine, and ever since then I've been desperate to learn how to make my own.

But it's tricky. Cupcakes are a, ahem, a piece of cake, by comparison. With macarons, there are so many varied recipes, and quite a few opportunities to make mistakes that after only a couple of attempts, I'm ashamed to admit that they got the better of me.

Consigning them to the “impossible” bin and only splashing out on shop-bought ones for the rarest of occasions (Raymond Blanc sells them at a whopping £6.50 for a box of 12 small ones!), it was a chance encounter with a local chef claiming to have a “foolproof” recipe that reignited my fire to try again.

Before we go any further, I should perhaps explain what had happened before. In my first attempt, which I used a recipe from a magazine, I just couldn't get the mixture to work. It was a gloopy, sticky mess that had less chance of forming a solid structure than a cowboy builder.

The mixture spread across the baking paper, but I put them in the oven anyway, hoping for some kind of baking miracle to occur. Obviously, it didn't, and what came out was a cooked version of the gloopy mess that had gone in. Not good. And it was made all the more upsetting by the fact that the recipe had claimed to be “easy”.

But, if you do a little Googling, you soon come across plenty of other macaron failures, which is comforting, I suppose.

Determined not to be defeated, I tried another recipe, from a different magazine, also promising to be “easy.” This time, my hopes were raised as the mixture appeared to be working, the little splodges on the baking sheet even looked more or less like the recipe's picture on the sheet.

But after the allotted time in the oven, I took them out and while they didn't look perfect, they looked vaguely passable. Success, I thought. Until I tried to get them off the sheet and that proved impossible. My knife was supposed to slide under the macaron with ease, lifting them effortlessly off the sheet. Instead, I was met by another sticky, gooey mess, and by the time I’d prised them off the sheet of paper, well let’s just say I was hardly going to be able to set up a business to rival Raymond Blanc anytime soon.

Fast forward to a few months when I met Steve Bennett, head chef at Abergavenny’s Llansantffraed Court Hotel. Steve told me he had a “foolproof” macaron recipe that even I, kitchen klutz, couldn’t mess up.

Sceptical but eager, I tried out the recipe, and I have to say I’m impressed. The recipe is for mini macarons, and is incredibly simple to whip up a batch of mixture as it only uses a few ingredients. I’d recommend taking care and patience when weighing out the ingredients, and have them ready before you start, but other than that, this is by far the most fuss-free recipe I’ve come across.

Sieve all (A) ingredients, whip (B) to a light ribbon, then add (C) to (B) gradually as you continue whipping, until a firm shiny meringue is achieved.

Fold (A) into the meringue in stages, then pour into a piping bag fitted with an 8-10mm nozzle. Pipe onto siliconised parchment paper (available from good kitchenware stores, such as Lakeland), into 2cm wide balls. Leave to dry for 10-12 minutes, then bake at 140°c for 5 minutes, turn the tray around and bake for a further 4-6 minutes.

Either remove from the sheet immediately or if cooled completely, warm the bottom of the tray and slide off that way. If you’re having any trouble removing the macarons from the paper, pour a small amount of cold water onto the sheet, creating steam to help loosen them.

Bring the double cream to the boil, and pour over the dark chocolate, stirring until the chocolate is fully melted and smooth. Squeeze excess water from the gelatine and add to the warm chocolate mix, again stir until incorporated. Chill in the fridge for 2 hours, then spread a little on a macaron and top with another, squeezing together to make a sandwich. Refrigerate to allow them to soften slightly, and return to room temperature before serving.

The macarons will keep in a closed dry tin for 3 days. Makes around 50 mini-macarons, the recipe is easily halved.

For plain macarons, use 30g flour, 350g icing sugar, 212g ground almonds as part (A), and 190g egg white as (B) and 90g sugar as part (C). For the filling, use vanilla buttercream mixed with a little raspberry coulis.

While my resulting macarons are far from perfect, in fairness I’ve read it can take years to perfect the art, I’m confident that with a little practice, I will be turning out impressive batches of these for a while yet.

Now, I will experiment with oven temperatures and timings in my quest for perfection, and I recommend you do the same. Don’t be disheartened if your first batch doesn’t turn out like you saw in an expensive patisserie – remember, there’s a reason they’re expensive!

Try out Steve Bennett’s “foolproof” macaron recipe(above)  and visit the Llansantffraed Court Hotel website for more details on his restaurant.

The next big baking trend