Perfect potato salad is easy if you know how. Get it right every time with these top tips.

Potato salad is the ideal spring and summer side, a great accompaniment to everything from light lunches to rich barbecued meats. But there's more to the dish than you might think.

On a quest to discover the experts’ top tips I started where all culinary challenges logically begin, with cookery bible Larousse Gastronomique. I found listed under potato: salads not one, but 13 different versions, all from different countries and each containing a host of extra ingredients.

I went back to the drawing board and turned to Constance Spry. Described as the original domestic goddess, Spry invented coronation chicken for the Queen’s ascent to the throne in 1953. If anyone should know about potato salad, it is she. Sure enough, Spry’s version comprises boiled new potatoes and homemade mayonnaise as well as a sharp French dressing with added mustard (three parts oil, one part wine vinegar and a good half teaspoon each of salt and freshly milled black pepper). She adds the dressing to the warm potatoes then chills before combining with mayonnaise.

It soon becomes clear that as many chefs have different versions as do the countries listed in Larousse – but some tips are universal. Below I've rounded up the best. If you want to learn how to make potato salad, start here.

1. Choose the right variety of potato

You don’t need me to say that home-grown will always taste best, but the key rules to follow are to choose either salad potatoes or a waxy, early variety.

Salad potatoes can be new or maincrop potatoes, including Charlotte and Pink Fir Apple. These have a slightly thicker skin than new potatoes, but share the same texture and full flavour. New potatoes are traditionally harvested in spring and early summer. Varieties perfect for potato salad include Maris Bard, Maris Peer, Rocket, Kipfler and Belle de Fontenay.

3. Steam or boil potatoes in their skins and don’t scrape them

Another doyenne of British cooking, Elizabeth David, insists that new potatoes should be placed directly into boiling water, not cold. It is a method followed by Nigella, Jamie, Delia and Nigel Slater.

To find out why, I looked in a fantastic book called Potato by Alex Barker and Sally Mansfield. It explains that new potatoes have a higher vitamin C content than maincrop varieties and so should not be left soaking to prevent the vitamin leaching out into the water.

Delia Smith recommends washing new potatoes, but not scraping them, as there is a lot of flavour in their delicate skins.

This is a good hint if you’re trying to go easy on the butter, as it adds extra flavour early in the cooking process.

5. Dress the potatoes while still warm

All the experts agree that adding dressing to warm potatoes will ensure they absorb the maximum amount of flavour, making for a tastier potato salad. This is one of Constance Spry’s two ‘points of importance’ for making potato salad.

Leaving skins on is more contentious. Some, like Jamie Oliver, Nigel Slater and Constance Spry leave skins on; others, like Elizabeth David and Simon Hopkinson peel and slice potatoes (while still warm)

6. Keep your sauce light but creamy

Potato salad needs a dressing that isn’t too thick or the whole dish becomes too heavy. The simplest option is mayonnaise and white wine vinegar, which you can enrich with a dollop of crème fraîche or yogurt.

Mustard is another excellent addition, as are fresh herbs such as chives, dill and parsley.

Simon Hopkinson veers from tradition with a dressing made by blending two tablespoons each of smooth Dijon mustard, white wine vinegar and water, along with seasoning. He then adds sunflower oil in a thin stream to make the consistency of salad cream.

7. Include a sharp ingredient

This is the second piece of advice from Constance Spry, and one that is backed up by Nigel Slater, who says he finds the buttery texture of a traditional salad potato too cloying once dressed with an oily mayo. 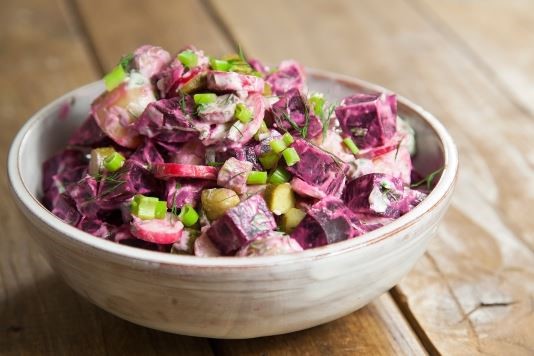 No food tastes at its best when straight out of the fridge.