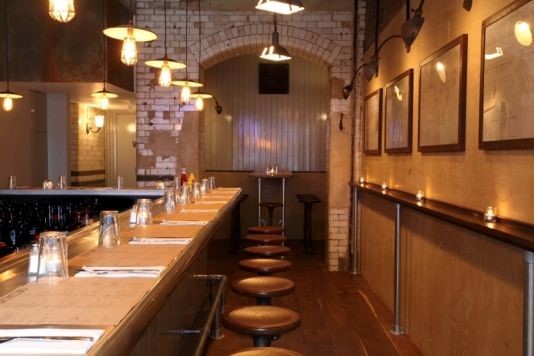 The New York-style Soho snack bar comes from the same stable as Polpo and Polpetto. Is it another thoroughbred winner, or a bit of a `mare?

Russell Norman has got the hang of Twitter. Each of his and partner Richard Beatty’s openings is accompanied by drool-worthy tweets from the HQ, @PolpoSoho. What follows is a flurry – no, a week-long hurricane – of tweeting from giddy acolytes desperate to be first through the door of their latest gaff. Then the bloggers follow, and before you can say provolone bocconcini the place is a hit.

Such was the case with the opening of Spuntino, a 26-seater snack bar. Chris Pople, my pin-up restaurant blogger, gushed; Helen Graves, another of my favourites, was equally awed. In fact, pretty much everyone sprayed for Spuntino. Or Spunkies as some call it.

For the uninitiated, arriving at the bar can be a little intimidating. There’s a strange ritual that occurs every few minutes at the door of Spuntino. Someone approaches, surveying the distressed, unsigned fronting. Peering through the window they see it looks like a restaurant – a bar, at least, with punters hunched over food of some description – but then step back to look at the menu on the door. And a menu there ain’t.

If they’re brave enough to enter (they usually shuffle off looking perplexed) they’ll most likely find they can’t get a seat. It can all be a little off-putting. But then that’s the point of Spuntino. It’s not about reservations and back-handers and fawning service; it’s impulsive, informal, clandestine. It’s not for everyone, not by a long chalk.

But once you’re inside, seated, and quenched, the charm of the place is pervasive. The staff are chatty and cool (occasionally in a trying-a-little-bit-too-hard kind of way), and the décor is New York-inspired grunge-chic – all tiled bricks and exposed light bulbs.

There’s not really such a thing as a main course or a starter – instead you can, no, you should, start by nibbling the stuffed and deep-fried olives. Shirk the right-on popcorn proffered with drinks, which has been over-spiced in my experience, and dive straight into these anchovy and sage-stuffed beauties. They are very fine indeed.

olives and move onto the big stuff, which is mostly terrific.

Both ground beef and salt beef sliders (mini burgers to you and me) are near-perfect – rich and meaty and just greasy enough to have you reaching for your negroni.

In fact, there’s not much here for dieters. ‘Plates’ – the closest thing to mains – consist of such Weight Watchers favourites as mac and cheese, truffled egg toast, spicy sausage, and steak and eggs.

The mac and cheese is good but not worth crossing the country for. Truffled egg toast is justly lauded – for me it’s the bread that makes this a winning dish. Yes, the yolk is wobbly and golden, the truffle intoxicating, but it’s the thickly sliced, hollowed white toast that makes this dish rock so hard.

Soft shell crab with Tabasco aioli is a delicious taste of the south (-ern United States), though I resent sharing it.

That’s a compliment. Calamari is not deep-fried and is all the better for it, served in its ink with chickpeas. I like it, though it’s similar to some of the dishes proffered in the other Polpi.

Of the sides, there are cheddar grits that you will either love or hate (I love), shoestring fries that are crisp and salty, greens, and some truly wondrous aubergine chips with fennel yoghurt – one of the stand-out dishes.

Only once have I had room for pudding after gorging on all the above, demolishing the liquorice ice cream with pineapple; original, cleansing, and as Helen Graves said, like eating black jack and fruit salad sweets together. I also love the idea of the peanut butter ice cream sandwich with jelly filling. Clever.

There’s only really one rotter on the menu – a gem leaf salad with soft-boiled egg and a creamed salt cod dressing. A riff on a Caesar salad, sure, but in the way that Pete Doherty might riff on Stevie Ray Vaughan – strange, misconceived, and verging on unpleasant. It just tasted of off fish. Really off fish. That said, my companion liked it so make your own conclusions.

The one other caveat is price. Spuntino is not expensive but by no means is it cheap, and don’t believe anyone who tells you it is. Yes the dishes are moderately priced, and yes you can get a shot of bourbon for £2, but if you’re going to do it properly then you’re looking at £25 a head minimum. And just what’s the point in going to a restaurant and not doing it properly? It’s hard enough to get a seat at Spuntino; once there, you’re best staying put.

Worth the hype? Yes. There’s nowhere else quite like it.

Go if: You like buzz, booze, and muckily good food.

Don’t go if: You want somewhere comfortable and quiet where you can get a reservation.

10 things your barista isn't telling you