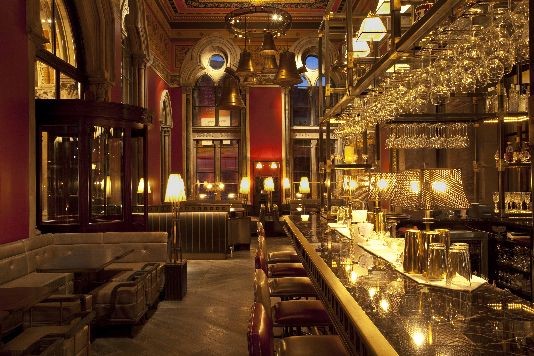 The refurb had taken aeons and cost a bomb after the building itself had lain fallow for several decades, during which period the Spice Girls had filmed the groundbreaking video for Wannabe on the grand staircase.

Add a fine chef like Wareing to that mix, and a menu that promised (supposedly) simple, revisionist grub, and something pretty mega was in the offing.

At least, that was the idea. But other than the odd rhapsody from John Lanchester and the Daily Mail’s Sadie Whitelocks, the reception was flat, indifferent. The room, it was agreed, was one of the finest in the land, but that was where the buzz ended.

And, like that, The Gilbert Scott very neatly made the point I clumsily try to make with this column. Such was the frenzy whipped up by the chatter surrounding its inauguration, that when punters eventually pitched up to eat the great Marcus Wareing’s ‘simplified’ grub, they were disappointed.

Which is a shame, because the two meals I ate there were, for the most part, very good. I don’t necessarily agree with Giles Coren’s gushing conclusion, but on the Giles vs Fay Venn diagram you’d certainly find me in the Coren crescent, if occasionally peering over the fence into the penumbra of the middle ground.

The dining room is indeed an absolute stonker. A swooping arc in the west wing of the hotel, it is to Heston’s overrated (at least design-wise, but we’ll get to that) Dinner as Montgomery cheddar is to Kraft cheese slices. It’s the sort of dining room that makes you yearn for the days of top hats and bonnets and proper leather suitcases.

There’s an excellent bloody Mary, whose celery stick comes on a skewer with two cherry tomatoes – one marinated in dry sherry and t’other in sweet. You eat the dry tomato first, slurp the cocktail while chewing on the celery, then finish with the sweet tomato.

Clever stuff, though the second time I went they’d got the tomatoes the wrong way round – nitpicking, maybe, but if you’re trying to be that slick with your cocktails then you shouldn’t be making schoolboy errors. It’s like attempting a reverse sweep and demolishing the stumps with the follow through.

The menu is so vast as to be a little intimidating, but is fat with dishes that appeal – Cullen skink, potted shrimp, baked onions; lemon sole, lamb rump, pork chop – real food.

I won’t review my first meal there because it was during the soft opening and it just ain’t cricket to review a restaurant that’s feeding you a reduced-price menu on the understanding that there will be some hiccoughs.

Second time around I started with a very fine mulligatawny, which was well spiced without being overly complex – just incredibly clean and slurpable. Nestled within were juicy bits of quail and some dainty onion rings. The onion rings sort of worked but I always thought the point of an onion ring was to be crisp, and so slinging it into a soup seemed counterintuitive.

My companion’s Harrogate loaf was a wedge of terrine served with Melba toast and piccalilli. He would have preferred proper toast, as would I, but then Melba toast fits in with the retro ideal of the Gilbert Scott. The loaf – a veal and bacon affair – was generous and well seasoned and, I suppose, as good as a pressed baby cow can ever be. And anything with pickles is fine by me.

Mains are generous on the sea front, which is good to see as a glutton but less so for someone with any sort of interest in conservation. Nevertheless the quality of the fish is high and my friend’s haddock was nicely cooked, if perhaps a little robust following the doorstop that was the Harrogate loaf. But that’s not the fault of the restaurant.

I hovered over the cod and chips, as I’ve yet to have a restaurant’s fish and chips that ever surpassed a proper chippy’s, but ended up chewing on a good bit of lamb rump that was pink and perky but lacked a certain zig-a-zig-ah in the seasoning. We did, however, have a bowl of George’s chips, which I now note were supposed to come with Sarson’s mayonnaise but didn’t. Heigh ho.

Puddings are great fun. There’s a nifty play on a jaffa cake that’s brilliantly executed and that my friend demolished, allowing me only the briefest nibble. I’d like to go back to try the Eccles cake with cheddar cheese ice cream, and Mrs Beeton’s snow eggs, which make me think of Mrs Beeton as a Canada goose, for some reason.

So the food is good, no doubt about it. The main problem for me is the price. It’s all very well to espouse a return to simple cooking, but then to charge close-to-fine-dining prices seems a bit, well, cheeky. I’m not the first person to point out the seeming difficulties for a top-end chef to ‘go acoustic’, and The Gilbert Scott is a prime example.

For what you pay, there are a dozen places in London where you can eat better, yet there is something very appealing about The Gilbert Scott. It feels somehow epic and unique – a genuine throwback to the possibly mythical golden age of rail travel. Book yourself a trip somewhere special and eat here first. That’s what a station brasserie is really for.

Worth the hype? Hmm, difficult. It’s certainly more deserving of the hype than it is of the negative reviews, but I wouldn’t say it’s a must go.

Marcus Wareing on what makes him cook