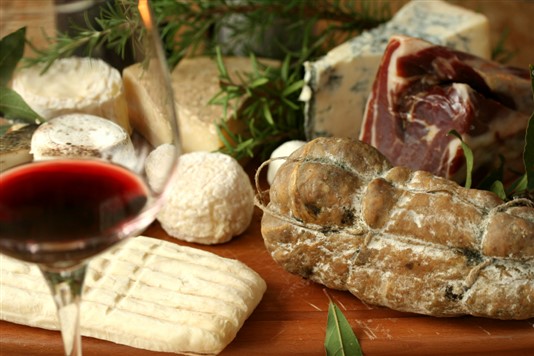 Who doesn't love a good deli? We've unearthed a handful of the best for you to go and try out. Enjoy!

There’s something about the piles of glistening olives, slices of delectable ham and oozy cheeses in a deli that gets food lovers all excited. You know it’s all of the highest quality, there’ll be things you’ve never tasted before and the people that work there really know their stuff.

So, clear your diary, grab a basket and hot foot it down to one of these great delis!

Nestled down in the Westcountry, Darts Farm is a food lovers’ heaven. What started as a humble farm shop 40 years ago has turned into an award winning food hub.

Darts Farm sells the produce of hundreds of local food and drink producers in addition to growing and selling much of their own. As well as a delicatessen there is an on-site fishmonger, butcher, baker and cider maker. The only thing missing is someone to make the candle sticks...

The deli itself is stocked with the finest cheeses, olives, charcuterie as well as homemade pies, quiches and deserts. When I went to Darts Farm I was seduced by both the look and smell of the deli . The people behind the counters really know their stuff and any questions I had were answered in a flash.

Joseph Benjamin is filled to the brim with homemade produce, local specialties and the finest treats from around the world.

Anything labelled homemade such as chutneys, terrines and pastries are made on the premises, so minimum food miles and maximum freshness. “Our homemade tomato ketchup is made fresh on site and is probably my favourite thing in the deli,” Richard Stevens from Joseph Benjamin told us. “We have a dedicated fan base who come in and buy it every week!”

Local produce includes artisan breads from three local bakers, cured meats and salami from all over the Northwest, Cheshire fruit juices and a wide range of locally brewed real ales. Although Italy and Spain may be famed for its cured meats, we are assured that British varieties go down a treat, especially their local British chorizo.

Venturing slightly further afield, there is seriously good olive oil, pasta and prosciutto from Italy and a selection of wines, spirits and liqueurs from around the world.

Bayley & Sage first opened its doors back in 1997 and has been proving top quality produce ever since. The deli stocks over 3000 lines of great tasting food including cheeses from the UK and Europe, fresh seasonal produce, artisan breads, organic meat and fresh fish.

With Spring well and truly under way, the shelves at Bayley & Sage are creaking under the weight of seasonal asparagus, jersey royals and outdoor rhubarb. Local produce is important to Bayley and Sage sourcing meat from the Rhug Estate, fish caught on day boats from Looe in Cornwall and apple juice pressed in Kent.

Popular choices at this time of year include lamb, with their most popular being the salt marsh lamb from Foulness Island in the Thames Estuary. “The succulent sweet flavour of the lamb is a result of the grazing over natural grasses and samphire of the salt marshes,” explains a spokesperson.

As well as stocking up on fresh produce, you can grab a sandwich or salad to go, prepared each morning in their kitchen. Yum.

You may have guessed from the name, but these guys are pretty clued up when it comes to cheese. There is a mind boggling selection from bries and blues to gruyere and gorgonzola.

The Fine Cheese Company offers only artisan cheeses made predominantly by small producers using traditional methods. A strong relationship with the cheese makers means they can specify age, condition and flavour to deliver the finest tasting cheese.

They have a monthly cheese selection, where they suggest different cheeses which is great is you don’t quite know what to go for or fancy a change.

The Fine Cheese Company isn’t a one trick pony, though. It offers a selection of charcuterie, terrine and wine as well as sweet treats such as chocolates, honey and a wide choice of teas.

Kember and Jones has become quite an institution in Glasgow with its range of top quality food and drink.

The doors opened in 2004 by Claire Jones from Glasgow and Phil Kember from Portsmouth. Their vision was to create somewhere where people could enjoy high quality food to eat and buy.

Their range covers authentic pasta and sauces, chutneys, cheeses, bread and much more. The on-site cafe serves tasty treats inspired from the products stocked in the deli.

The kitchens provide a range of takeaway options as well as their their famous scones and giant meringues. Their sweet treats should taste sublime, given the amount of work that goes into them.

Henshelwoods Delicatessen is a foodie heaven in the centre of beautiful York. There is a wealth of quality food to choose from with over 50 British and continental cheeses, British and European charcuterie and chutneys, jams and pickles.

There are homemade specialties which include their famous Whitby crab and daily changing soups in winter and quiches in summer. Ali Vincent from Henshelwoods says their chicken liver pate is the best. “ Our Yorkshire cheese is also really popular. We only stock food we love – if we don’t like it, we won’t sell it!”

Henshelwoods stocks about 60% British produce with the rest coming in from the Continent. As well as their wide selection of ingredients you can pick up a meal to take home for the days when you can’t face cooking (and we all have them now and again). Fresh and flavoursome, it’s convenience food as it should be.

If there’s a great Deli near you, then we want to know about it! Use the comments box below to post your suggestions.

The top six fish & chip shops in the UK

The best bangers in Britain