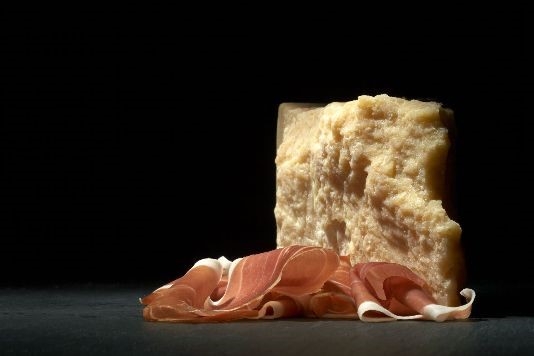 There are good reasons why you should look to Northern Italy for gastronomic pleasure.

If you care about where your food comes from and how it’s made, then gastro hotspot Parma in Northern Italy deserves a place on your bucket list. Dubbed the capital of the food valley, it’s overflowing with Parma Ham, Parmesan cheese, walnuts, honey, tomatoes, robust red wines, and lightly sparkling crisp white wines.

You can’t help but fall full-on in love with this heavenly place and put on a stone in weight simultaneously. So what’s so special about the two main stars, Parma Ham and Parmigiano-Reggiano cheese?

Well, for starters, they’ve been around for a very, very long time.

On a walking tour of Parma you crane your neck to look up at the busy ceilings of 12th century churches awash with swirling biblical scenes set alongside depictions of man’s place in the world. It’s here you’ll spot carvings showing the seasonal killing of the pig.

There is evidence from the 13th-14th century that Parmigiano-Reggiano was pretty close to the cheese produced today, suggesting that its origins can be traced even earlier.

Often time brings progress, but here the food is so good it doesn’t need changing even after hundreds of years.

Italian babies are still weaned chewing on wedges of Parmesan, school children enjoy an afternoon snack of Parma Ham wrapped around bread; just like their ancestors did centuries ago.

Parma Ham is made from four ingredients, pork, salt, air and time. The hams are cured for at least a year, some are cured for 30 months to achieve its distinctive velvety texture and sweet flavour.

Years ago the pigs were slaughtered in the winter so the meat could be kept at the right temperature in the early stages of curing until warmer weather was used for drying.

Temperature and humidity are now controlled using technology, but the principles are the same with little interference with the meat. It hangs in well-ventilated dark rooms for months, occasionally windows will be opened, but only when weather conditions are exactly right.

It’s a cooked cheese, so where historically fires were lit to heat the milk, steam is now released within the walls of large copper kettles to warm the whopping 1,200 litres of milk.

It’s aged for a minimum of 12 months and up to 36 months, turned and brushed weekly during this time. The longer it’s matured the more crumbly the texture and intense the flavour. An 18-month-old Parmesan is perfect for grating into risotto and pasta, while a punchy 36-month-old is best on a cheeseboard.

Parma Ham and Parmigiano-Reggiano cheese have been covered by the European Union’s Protected Designation of Origin system (PDOs) since the 1990s.

By law, only hams produced and cured in the hills around Parma may become Parma Hams - that’s just 12 towns with 167 producers. The unique micro-climate of this region is crucial to production. The pigs used must be bred in ten northern and central Italian regions and fed a very specific diet, including surplus whey from Parmesan cheese production.

While the French word Parmesan is mistakenly used as a generic term for cheeses that are similar to proper Parmesan, it is only Parmigiano-Reggiano that has the PDO and is genuine.

Parmigiano-Reggiano is produced within the restricted area where it gets its name. This includes Parma, Reggio Emilia, Modena, Bologna (on the western bank of Reno River) and Mantova (on the eastern bank of the Po River).

Only cows in this region are used to produce milk for cheese-making, and fed a strictly controlled diet of fresh hay (never silage). The emphasis is not on how much milk they produce but the quality. Using milk from these cows helps to make the cheese distinctive, and the climate that the cheese is aged in, again is unique.

The pride the artisans take in their products is evident in the lengths they go to to ensure perfection is achieved.

The Parmesan cheese makers are thought of as chefs with their own philosophy, developed over a lengthy apprenticeship and a life-time of making Parmigiano-Reggiano every single morning.

The cheese maker at Dairy Caseificio San Lucio told me he refuses to take holidays unless his father is around to keep an eye on the wheels of cheese - so precious he wouldn’t trust anyone else but the man who taught him the craft in the first place.

The Parma Ham producer at Prosciuttificio Italifine SRL has retired, leaving his business in the hands of his two daughters, but he’s still there chatting to staff at every opportunity. The factory workers are rarely from outside the region and have grown up knowing the business.

Quality is checked every step of the way, and it’s easy to spot the real deal on the packaging.

Parma Ham is identified by its famous logo, the Ducal Crown, which guarantees its quality and authenticity. Only the finest wheels of Parmesan cheese receive the coveted Parmigiano-Reggiano cheese fire brand.

Check out how to use these heritage ingredients in Lesley Waters’ polenta cakes, a recipe inspired by Parma itself.

Why the Italians love pasta

Photo courtesy of Discover The Origin