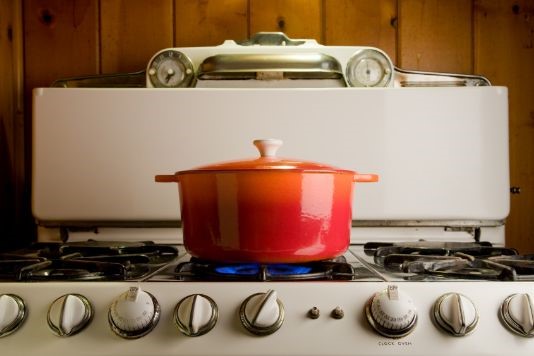 Times are hard, money is tight but stomachs are still rumbling. In this new age of austerity, it's the approach to cooking from former hard times that will take us through.

I came across a yellowing copy of Delia Smith’s Frugal Food in my cupboard last week. Published in 1976, the introduction says, ‘The fact is I feel our days of unrestricted choice in eating are strictly numbered. There simply isn’t enough food on this planet to feed all the people who live on it.’

Turns out, alongside her skills in the kitchen, the queen of British cooking may have culinary psychic powers, as she managed to sum up the food climate of 2011 in a book published almost 40 years ago.

The effects of growing world population are already showing in our supermarkets. The price of meat and fish is rising. You can expect anything brought in from abroad, too, to cost you more as oil prices rise, pushing up the cost of transportation.

And you’ve also got food inflation to contend with, where prices rise, simply because the value of the pound is being nibbled away at by the economic climate.

So what to do? Well, it’s not like this is the first time in history food has been more scarce and prices are rising. They managed in the 40s-50s during and post war, and in the 70s recession that preceded the one we’ve all just emerged from. Yes, we’re not quite in the same dire straits, but there are lessons to be learnt.

In former times of austerity, people were wise enough to (or didn’t have the choice but to) branch out.

Instead of a sirloin, neck fillet or loin, people ate cheaper cuts of meat like chuck steak, pork belly or lamb shoulder.

Today these are all still cheaper and have tonnes of flavour. It takes a bit more love and slow cooking to coax the best out of them – hot pots, stews and roasts dominate Delia’s book, and the menus of the post-war era – but in my kitchen at home, time isn’t money.

Not everyone served up tripe each night, but people were certainly more willing to have a go at offal (Delia calls it ‘spare parts’), which is cheap and, if it’s your thing, tasty. Lots of younger people have a bit of a complex about eating sweetbreads, yet once a Chinese friend served me up kidneys stir fried with cucumber which was, to my surprise, delicious.

Eating seasonally is also part of the basic theory. You wouldn’t have caught someone in the 1940s munching their way through a watery Spanish tomato in January, mainly because imports on today’s scale just didn’t happen then.

Instead, their tomatoes would have been British and bursting with flavour, but only eaten in the summer. Produce in season is cheaper because there’s lots of it, and eating the seasons mixes up our annual diet and gives variety. Plus it’s a greener way to live.

These are the basics, all backed up by portion size. When food was scarce, people ate less. Not so much snacking and smaller portions usually makes for healthier diets.

I’m not saying we should starve ourselves because prices have gone up a bit, but cutting out the excess will save cash, and make us appreciate it all the more when we do fancy splurging on a plump steak.

When times are hard and stomachs are rumbling, it’s the dinner ideas of former times that can help you keep your taste buds stimulated without draining your bank account.

So, I think it’s time for a retro food revival. Look to the queens of vintage cooking like Mrs Beeton, Elizabeth David and darling Delia so we can all keep our food tasty, whilst tightening our budgets and our belts.