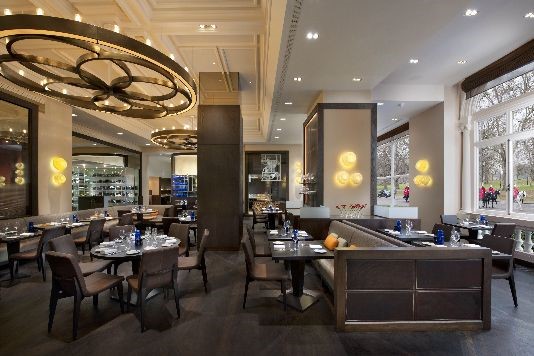 Heston Blumenthal's restaurant at the Mandarin Oriental has been the biggest opening of the year. Seven months later, is it still up to scratch?

When your friend breathlessly tells you that One Day is, like, literally the best book ever, then on the whole you – or at least you should – take it with a pinch of salt. And then nudge them in the direction of Dickens or Flaubert or Roger’s Profanisaurus.

And when Joe Blogger says that so-and-so’s pizzas are literally the best in the world then you nudge them towards Naples and the O.E.D. definition of ‘literally’ (it’s literally the most misused word ever).

But when AA Gill gives somewhere full marks, when you go on the second day and it isn’t so much a restaurant as seemingly the AGM of London’s critics (Jan Moir was even there FFS), and when The Times is so eager to beat the bloggers to the punch that it runs its review on Wednesday instead of the usual Saturday, you can be forgiven for thinking that maybe, just maybe, the ballyhoo should be taken literally.

If this is the moment when you’re hoping I’ll say ‘well it’s sh*t’, then I’m afraid you’re going to be disappointed. All things considered, Dinner is a pretty damn fine restaurant.

Let’s ignore everything about the rugby ball-headed man behind it, and let’s discard the fatuous platitudes about what a luxury it is to be able to eat his food in such an informal and ‘affordable’ – hah! – manner, and just start from scratch. The rest is noise. Ultimately it doesn’t really matter what else the guy has done – it’s Dinner we’re judging and Dinner alone.

It’s very hotelly. Obviously – it’s in a hotel. But while many have fawned over the design and the park views

and the jellies on the wall, it’s all a bit cavernous and bouncy. The giant clock thing that turns the pineapple spits is undoubtedly impressive, but I’d bung a pig or a lamb or an emu on it. Not a pineapple.

No, it’s the minutiae that make Dinner special, not the great vaunting, show-off, cash-splashy, oligarch-pleasing bilge. It’s in the way the barmaid wordlessly moves my friend’s drink, crisps, and newspaper from bar to table when I arrive late, it’s in the immaculate, friendly, informed service, it’s in the just-warm bread, and butter kissed with sea salt.

I start with salamagundy – almost a light Sunday lunch of chicken oysters (the nuggets of flesh where thigh meets back) and pinkish marrow, horseradish and pickled this and that in a broth. It’s really very good indeed, with just a whisper of smoke and extraordinary depth of flavour.

My friend Will’s scallops with cucumber and borage is a stunning-looking dish that is very much up to the mark, the cucumber ketchup’s cool/sour interplay being just the thing alongside fat, fat scallops.

On my first visit I’d tried the now signature meat fruit, which is as good as everyone says it is, and a sublime dish of cod cheeks with a herb-drilled porridge. It’s fair to say that the starters are near faultless.

Mains are a bit of a letdown, unfortunately. After such a promising start, we are bordering on effervescent, but my powdered duck isn’t all that far from the ‘bad’ end of things.

The waiter tells us that the leg had been marinated for some time in spices before being cooked – I assume sous-vide – for 12 hours. The result is perfectly cooked and tender meat, but meat that lacks any great punch or vitality, with skin that is soft, not crisp, and a layer of fat that is flabby and downright nasty.

This is the problem with sous-vide – the fat isn’t ever really given a chance to render and baste the meat and just sits there wobbling like Cliff Richard’s neck.

A side of pommes purees is as good as any potato that’s been pillaged by several ounces of butter will be, and the gravy is no doubt the result of some hardcore veal reduction, but overall the dish is a bit pfff.

Will’s pork chop is just-pink, and thus juicy, and imbued with that lovely smokiness that the increasingly ubiquitous Josper grill gives, but – and I might be wrong – I swear it has shrunk since my first visit.

He demolishes it, pronouncing it ‘very good indeed’, but then this is a man who swallows pieces of penne whole. I won’t tell you how I know that, for you might be eating.

Sides. Chips are good and so they should be from a chef who pioneered triple-cooked chips (I’m not sure why chips need cooking three times, but then I don’t have any Michelin stars). Cabbage is bordering on overcooked and worse than what you or I would knock out on a Sunday night.

I have no problem with keeping the mains relatively simple – in fact I think menus work best with whizz-bang starters and more subdued mains – but if you’re just serving a duck’s leg and some blitzed spud then it really has to sing, and none of this really did.

Puddings, happily, carry on where the starters left off. I can’t quite remember what we had first time around, or at least I can’t remember in detail – there was brown bread ice cream which I loved but others didn’t, and a very pretty taffety tart. Then the tipsy cake…imagine the best bread and butter pudding you’ve ever eaten and then add a little more butter and a great slosh of booze and the aforementioned spit-roasted pineapple.

It was one of the finest puddings I’d ever tasted, and doesn’t underwhelm second time around – quite something, considering the frequent misty-eyed reveries that followed our first encounter.

In its historical essence, in its grandeur, in its pedigree, even in price, Dinner sits very neatly alongside the Gilbert Scott. But the food is in another league, and while I left the Gilbert Scott feeling I’d been somewhat fleeced, Dinner still seems good value for money.

Mind you, it’s tricky to get into. We took a punt and strolled in at lunchtime, so that might be your best bet. Otherwise you may have a long wait on your hands. I’ve heard they’re literally booked up till the end of the year.

Worth the hype? Just about, but don’t go expecting the Fat Duck. Or Heston. Ashley Palmer-Watts is the extremely capable head chef and a slimmer Nick Frost doppelganger.

Rocksalt: The home of hearty seafare or just another fish in the sea?

Is Soho’s new snack bar a delight or a disappointment?