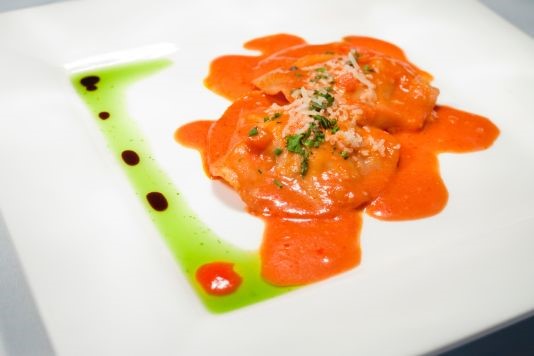 So many fancy restaurants offer miniscule portions of food. Surely it's time to bring back proper platefuls?

Do you ever wonder whether you could have done a better job putting together the plate sitting in front of you when you’re in an expensive restaurant?

Or worse, feel as though it could do with filling out a bit?

No, you're not arrogant if you feel drawn to responding yes - twice.

You’re not alone. These days, awash as we are by fancy medium/high price range restaurants, it is not uncommon to be dealt a plateful of food which resembles anything but, er, a 'plateful'.

A steak & chips can often come as a slither of meat over a perfectly Jenga-like constructed two-tier mountain of potato wedges, and 'Ravioli', probably the worst offender of all, will sometimes appear as just one raviolo sitting pretty amid flicks of attractive, kaleidoscopic sauces. Wholesome and filling? Not in the slightest.

But after years of this being the case, why has the issue raised its ugly head again?

Well, Delia Smith, arguably this nation's best-loved home cook, has recently re-highlighted these bugbears by claiming that the food offered in 1970s’ pubs far excels the variety and quality of the grub around today.

"Gifted amateurs opened restaurants and pubs and you could have real food," explained Delia. "If I am in a Michelin-starred restaurant and they have done this beautiful little smoked haddock soufflé in a thimble, I would like to order a whole big plateful. No, I’m not for four-course tasting menus.”

Harsh words, perhaps, but is she right?

Taster menu: Pricey or worth the fun?

There is space in everyone's heart for restaurants like the Fat Duck, Noma and Dinner, for they undoubtedly offer once-in-a-lifetime, unrepeatable experiences. Snail porridge, for example, has its appeal in its peculiarity.

The same is true for taster menus. While the 1970s, Delia suggests, was all about eating unfussy food in large, untidy portions, nowadays it seems we are all attracted by the miniature entrée-looking dishes that are served during a seven, eight, nine or ten-course menu.

The plates are all but wiped clean after the diner has had a mere spoonful of food and worse still, wine glasses - still tanked up with booze - come and go with every new culinary decoration – whether you’ve had the pleasure to do anything more than sip the stuff, or not.

Why are we so drawn to this way of eating in restaurants? Is it because we think that if such care and precision is taken over the aesthetics of the plate, it’ll subsequently have a better taste? Or is it because the popularity surrounding new culinary fads are such that we feel compelled to experiment?

I take a more cynical view. True, I have yet to encounter a bad ‘taster menu’, but then I’ve never come across an economical one either. Perhaps it’s that I’m always anticipating more food than the toddler amount I receive, but I do find that these culinary offerings are often unchangeable, give little in the way of choice, and rarely amount to being good value for money.

As an Italian, the more plentiful my bowl or plate in front of me, the happier and more sated I am.

Few restaurants in Italy, whether trattorie or pizzerie, bother with the idea of 'pretty food'. Of course, it goes without saying that the country has its fair share of ‘fine-dining’ restaurants, but increasingly, locals eschew such places in favour of the tried and tested – good – cheaper alternative.

What's delectable about the simplest of pasta, for example, is the aroma of thick, drizzled olive oil, the melting cheese and the fresh, ripe tomatoes it all sits upon - and most importantly of all, the anticipation of its consumption.

The compliments paid to a dish of this kind, are never directed towards the beauty of the sun blushed-tomato-perched-basil leaf and its surrounding bed of capers. It’s simply not important.

The better the taste, the better the compliment the chef/cook will receive. How it is presented and how it arrives at the table are both as insignificant as each other.

(I distinctly remember being ‘patted on the back’ if I were ever the first one to score ‘una medaglia di sugo’ – a medal made up of sauce – on my clothes at the dinner table.)

Admittedly, I wasn't around in the 1970s so there’s only so much with which I can be in agreement with Delia.

But it is a decade that became enthralled by the emergence of ‘instant’ food, hearty meatloafs, ‘the microwave oven’ and a treat that we all still enjoy today, Angel Delight. It’s easy to imagine, therefore, how particular our contemporary fine dining food must seem to a generation who were accustomed to eating plenteous plates of shepherd’s pie, toad in the hole and as much of a slab of cow meat as they liked.

We enjoy ‘gourmet experiences’ for their finesse, experimental attributes and unique flavours. But there can’t be anything worse than receiving but a quarter of the food than one hopes for – especially when you’re paying a good deal to consume whatever sits in front of you.

It’s true that we all need to watch the amount we eat in the ever-important drive to eat more healthily, but over-simplistic, mini portions is not the way to go about this. I’m with Delia. Let’s return to an age where rustled-up, plentiful favourites await us on the table. We may even find we have change out of a £20 note from it ….

It's time for a retro food revival