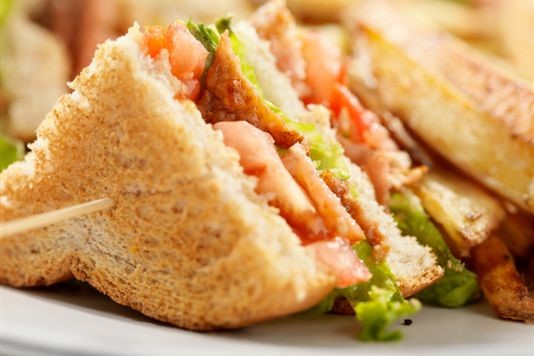 A range of sandwiches that can be displayed for sale for up to 14 days has just been unveiled.

It sounds like the kind of food item you might pick up, defenceless, in a late night garage as you make your way unsteadily home after a few drinks.

You might successfully manage to obliterate all memory of the purchase and the fact of its consumption - until you’re faced with the hard evidence of a discarded wrapper in your bag the next day.

It comes as something of a surprise then to hear that wholesale food distributor, Booker, is now urging its retailers to flog – in daylight hours – a sandwich it says can stay fresh for a full two weeks.

Booker says the sandwiches “look and taste great” and the company rather optimistically suggests that by stocking the range, shop owners will see their outlets become “food-to-go destinations”. Hmm. They would, wouldn’t they?

I suspect there’s another reason why shop owners might be attracted to a sandwich they have 14 days to sell and it’s got nothing to do with the taste.

It’s pretty obvious that this is all about profit: if there’s less risk of it remaining unsold, there’s less chance of the retailer’s bottom line being affected.

Booker may promote the new range as being “ideal to reduce wastage” – but the company clearly hasn’t considered the possibility that a large proportion of the 14 day old sandwiches, even if they are purchased, might very well go uneaten – generating, not reducing food wastage.

The range on offer

When making a sandwich that you hope will last for two weeks, you’re clearly going to have to think about what you can put in it. The technology surrounding the ever-ready sandwich means perishable ingredients can’t be part of the package.

Don’t even think about fresh salad leaves or tasty tomatoes. And if you think the mayonnaise is a bit acidic, it is! The acid adds longevity to the snack apparently.

So the Booker range inevitably has its limitations. There might be six combinations being marketed but they’re not exactly tempting. The cheese factor is high. Cheese ploughman’s? Cheese and onion? What about ham and cheese?

One thing these new creations have going for them is their price. They are cheap – but scarily so: they’re just £1.49 a pop. Even in the age of The Cuts, I doubt Booker’s On the Go range will ever threaten sandwich lists like this one.

The 14 day sandwich resulted from the dedicated work of a food scientist, Ray Boggiano. Of course we have a lot to thank food scientists for. Where would our armed forces be without the Meal, Ready to Eat? And where would health conscious non-combatants be without decaff coffee and low fat spreads?

But the process of “gas flushing” which Boggiano employed to make the 14 day old sandwich a reality is not something for which we should be grateful.

Mr Boggiano utilised the flushing technique to replace oxygen with carbon dioxide and nitrogen in the protective packaging of the sandwiches. Sounds tasty.

If the idea of actually eating 14 day old bread filled with similarly aged meaty and vegetarian fillings isn’t enough to put you off, this scientific wizardry should.

Sandwich selling shouldn’t be difficult. It’s a lucrative game – and a business that is ferociously fought over by the big players. The British Sandwich Association (who knew?) says that the British “on the go” sandwich market is currently worth £2.8 billion. In the last year alone, 1.69 billion such sandwiches were sold at an average price of £1.66.

All of this evidence of a convinced and loyal market of sandwich buyers makes you wonder why Ray Boggiano has gone to the expense of creating something that sounds so unappealing.

Wouldn’t it have been better to concentrate his efforts on creating something really useful, like chocolate that doesn’t melt?

At a time when freshness and food provenance is all to the consumer, I’d rate the chances of the fortnight sandwich being a success as close to zero.

If you want a decent sandwich, and not something stuffed with scientific nasties, or that’s more on the turn than on the go, try a shop that makes them daily and in store. Give me a good old fashioned Prêt sandwich anytime and not a breadless one. For sheer food nonsense they’re up there with the two week old sandwich.

What do you think?

Would you be game enough to try a 14 day old sandwich or are you put off by the very thought of it?  Let us know in the comments box below.

The top five sandwiches in the world

The truth about Prêt sandwiches.

Five inventions that changed how we eat