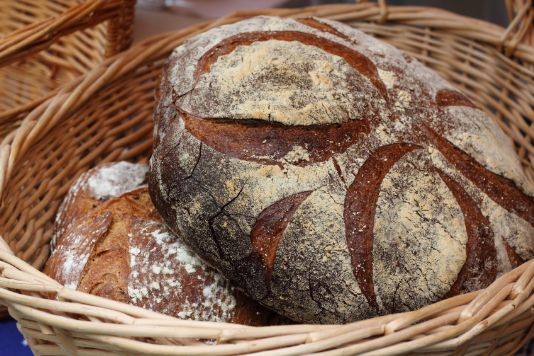 If you regularly buy quality bread - or even make your own - you're sometimes left with crusts and the odd slice or two that gets past its best. Here are five tasty ways to bring your bread back from the dead.

If you’ve got half a loaf ‘on the turn’ and fancy a cheap, warming and tasty dish, then this is the pud for you. It’s best made with good quality but slightly stale bread, the sort of bread that can take hours soaking in warm custard and not turn to complete mush. Bread made of the right stuff. Try our easy Gary Rhodes recipe here - it’s a classic.

This salad comes from Tuscany, and uses up not only stale bread, but really ripe tomatoes. It’s the coming together of key leftover ingredients and a few store cupboard essentials. A proper authentic panzanella should only contain stale bread, tomatoes, red onions, cucumbers, basil, and a dressing of red wine vinegar, olive oil and salt. But today, other additions are often found, such as capers, olives and whatever else you’ve got that needs eating up. It’s basically summer veg beefed up with stale bread, that can be served with pretty much anything - meats, fish or cheese.

If panzanella is the frugal Tuscan salad, then ribollita is the soup equivalent. Its name translates as ‘re-boiled’, and again, it’s a few to-hand ingredients bulked up by leftover bread. Cannellini beans, root vegetables, cavolo nero or Savoy cabbage, tomatoes, and anything else lurking at the bottom of the salad drawer is fair game. It’s basically a vegetable soup poured over toasted stale bread - simple, tasty and nourishing.

If you’ve ever cooked eggy bread, you’re standing on the shoulders of culinary giants. The ancient Romans, the chef Maestro Martino of Como in the fifteenth century, and seventeenth century cookery writer Hannah Glasse (recipe here) among others all produced recipes for it. The dish has had various names through the ages; in France it’s known as ‘pain perdu’ (lost bread) as the stale, i.e lost, bread was revived by the soaking in egg. In the UK, it’s had various names from gipsy toast, to eggy bread, to 'Poor Knights of Windsor’. This chivalrous connection is attributed to knights captured at the battle of Crécy (1346), who, after having paid the ransom demanded, were left broke. They were apparently given alms by King Edward III at Windsor Castle, and eggy bread was a cheap dish to make the money last.

This technique I found online here. It sees an old crust of bread (ideally the pointy end of an old baguette) pushed into the cavity of a roast chicken before cooking. I’ve tried it and it is brilliant. The end in the chicken becomes soft and chewy taking on the flaovour of the bird, while the exposed end becomes crunchy; a chef’s perk if nothing else.

As blogger Toby Travis explains ‘The idea with the bread is that it soaks up the juices during roasting – it’s the simplest stuffing recipe I know, and, if you’re lucky and the chuck is a good ‘un, it comes out gooey and unctuous’. As for how it came about, he goes on: ‘A French boyfriend of the sister of an ex-girlfriend of mine showed me this trick.’

At the very least, stale bread can be popped in a food processor and whizzed up to make breadcrumbs, good for coating chicken, fish, and vegetables or used instead of pastry on top of pie filling. As you can see there’s plenty of life in the old loaf yet.

Why do we love toast?